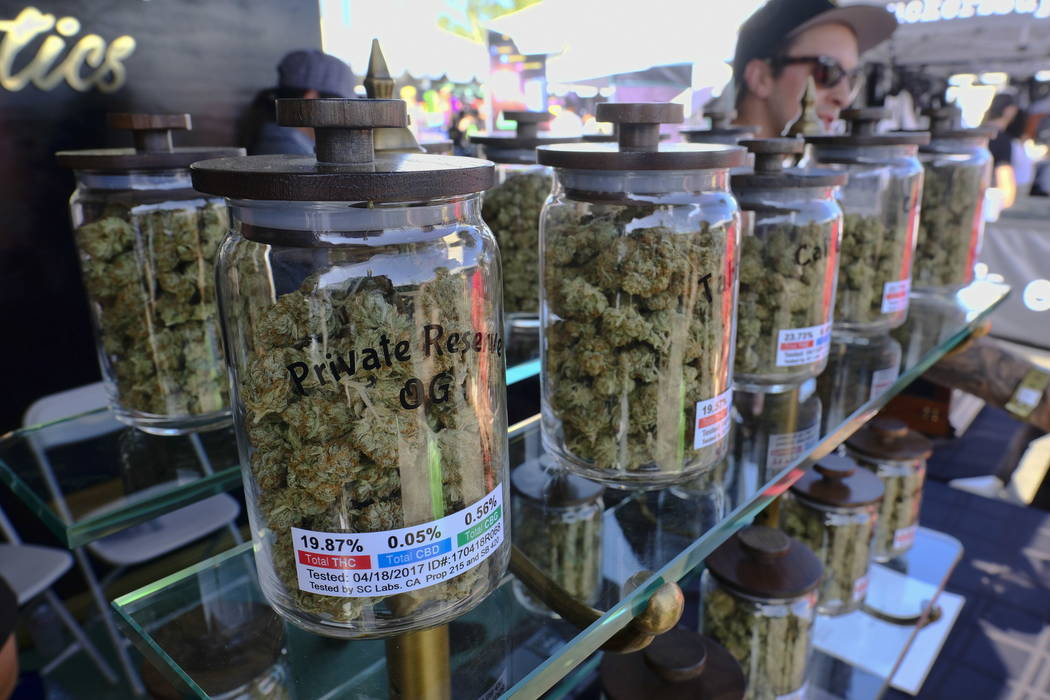 Large jars of marijuana are on display for sale at the Cali Gold Genetics booth during the High Times Cannabis Cup in San Bernardino, Calif., in April. (AP Photo/Richard Vogel,File)

California is set to join the legal weed party Jan. 1 when recreational sales become official in the Golden State.

The state was one of four, including Nevada, that voted in 2016 to legalize the recreational use of marijuana. With sales projected to top $5 billion once the market gets up and running, California’s cannabis corner is expected to be by far the nation’s largest.

Nevada’s fledgling market got off to such a hot start this summer by selling more than $85 million in recreational marijuana during the first three months of legal sales.

But having a big competitor nearby shouldn’t be a problem.

“I have not been concerned about that at all,” said Ben Sillitoe, CEO of Oasis Cannabis in Las Vegas.

California’s rollout won’t be like Nevada’s all-out blitz, when 44 stores across the state began selling recreational marijuana when the clock hit midnight July 1.

Only a handful of stores across California are expected to be selling adult-use cannabis Jan. 1, as many local governments there are still working out the regulatory details.

As 2018 rolls along, more stores in California are sure to get into the mix, but Sillitoe said he doesn’t see them as competitors but rather as a way to help eliminate his staunchest competition: the California black market.

California’s unregulated illegal market sold an estimated $5.7 billion in pot, according to a study by the University of California Agriculture Issues Center. Sillitoe and other dispensary owners in town say a chunk of that makes its way to Las Vegas.

Street dealers and illegal online delivery services peddle many of the same products that Sillitoe sells in his shop on Industrial Road near the Statosphere. But unlike Sillitoe, they aren’t licensed and don’t have to pay any taxes to the state, so they can sell their products at a fraction of the price, he said.

But as California implements its regulated market and more stores come online, they’re betting it will start to choke off that illegal supply chain.

“My hope is that the regulated California market will curb the flow of illegal products coming in and reducing the supply of my competition,” Sillitoe said.

So far, there is just a single case study in examining the impact, or lack thereof, on a state’s marijuana market when a neighboring state launches its own legal sales.

Washington was one of the first two states to start selling legal adult-use cannabis back in 2014. Its neighbor to the south, Oregon, rolled out recreational sales in October 2015.

At first, Oregon’s cheaper marijuana market did cut into sales in Washington, specifically in the counties on the border between the two states, where monthly sales dropped by as much as 47 percent in the three months after Oregon’s market opened.

But outside of those counties, state sales and tax revenue from marijuana soared in Washington, a trend that has continued. Since October 2015, Washington has seen its monthly excise tax receipts double from $14 million per month to $28 million in October of this year.

“I wouldn’t say it had much of an effect,” said Mikhail Carpenter with the Washington Cannabis and Liquor Board.

The closest comparison here would be the Lake Tahoe area, which has three marijuana dispensaries: one recreational dispensary in Incline Village and two medical dispensaries in Stateline.

Its a smaller sample than the case in Oregon and Washington, but examining what kind of impact those border communities have on the marijuana market is something the state will monitor, said Stephanie Klapstein, spokeswoman for the Nevada Department of Taxation.

Klapstein said the Tax Department, which regulates cannabis in Nevada, has not done formal research on the potential impact of California’s legalization but plans to look at a variety of impact areas once its market opens and data becomes available.

“We will watch the market closely and start planning where we want to focus our research,” she said. “Once the market opens in California, we will have a better sense of other issues we will need to examine.”

While California’s cannabis market might not infringe upon the Silver State’s, another looming threat could cause problems for all eight states that have legalized recreational marijuana: the federal government.

“It’s my view that the use of marijuana is detrimental, and we should not give encouragement in any way to it, and it represents a federal violation, which is in the law and is subject to being enforced,” Sessions told reporters Wednesday in Washington, D.C. “We are working our way through to a rational policy, but I don’t want to suggest in any way that this department believes that marijuana is harmless and people should not avoid it.”

Meanwhile, one law preventing the U.S. Department of Justice from going after state-regulated medical marijuana markets is set to expire in a matter of days.

That law, called the Rohrabacher-Blumenhauer amendment, prevents the Justice Department from using federal funds to interfere with state medical marijuana programs or prosecute businesses that comply with state laws.

That law is set to expire Dec. 8, but a bipartisan group of more than 60 members of Congress, including Nevada Democrat Reps. Dina Titus and Jacky Rosen, sent a letter Tuesday asking party leaders in the House and the Senate to keep those protections in place.