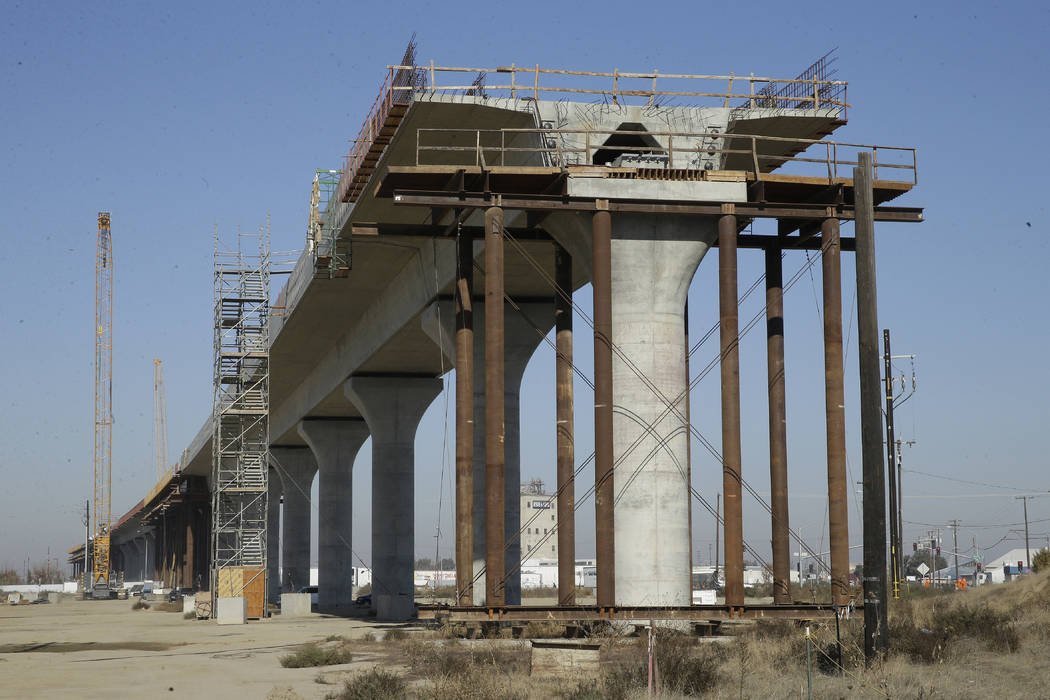 In this Wednesday, Dec. 6, 2017 file photo, is one of the elevated sections of the high-speed rail under construction in Fresno, Calif. (AP Photo/Rich Pedroncelli, file)

High-speed rail in California has turned into a slow-motion train wreck. At least it provides a case study in how inaccurate — or untruthful — government experts are when it comes to predicting the cost of new programs.

In 2008, California voters approved a $10 billion bond to start building a bullet train from San Francisco to Los Angeles. In the supposedly neutral description of the proposal, a legislative analyst determined the route, along with spurs to San Diego and Sacramento, would cost $45 billion. Proponents promised that speeds of up to 220 mph would allow riders to go from “Los Angeles to San Francisco in about 2½ hours for about $50 a person.” They also said California could pay the bond back “without raising taxes.”

Surprise! Ten years later, none of that has happened. The cost of the bullet train has grown from $45 billion to $64 billion to $78 billion. The latest estimate puts the final price at $100 billion, with a completion date of 2033.

To save money, the rail authority has resorted to reducing speeds. Instead of building 30 miles of elevated track south of San Francisco, it now wants to put track on land owned by Union-Pacific. For that section of track, train speed would drop to 110 mph. Overall, almost one-third of the route now faces speed restrictions. A train with only one or two stops would now travel between San Francisco and Los Angeles in 3.5 hours. Most trains would take more than 4 hours.

As ride times have gotten slower, ticket prices have soared. The rail agency has projected prices at $83, $105 and now $186. Southwest currently has midweek September flights from L.A. to San Francisco for $48 a ticket. The flight is just one hour and 25 minutes. The train is on track to demand passengers pay higher prices for a slower trip.

That’s assuming that the full line gets built, which is far from a sure thing. The rail authority has obtained less than $30 billion in funding, so it’s decided to complete a line between Fresno and Bakersfield. No really. That’s the plan. It wants to show the train is viable and then dare elected officials to reject their requests for more money — and tax hikes.

California’s bullet-train boondoggle provides a concrete example of why taxpayers should dismiss the rosy projections of the Las Vegas monorail backers.

Here’s a simple standard for future high-speed rail pipe dreams. If a private company isn’t willing to put up its own money to construct it, don’t force the beleaguered taxpayers to build it.