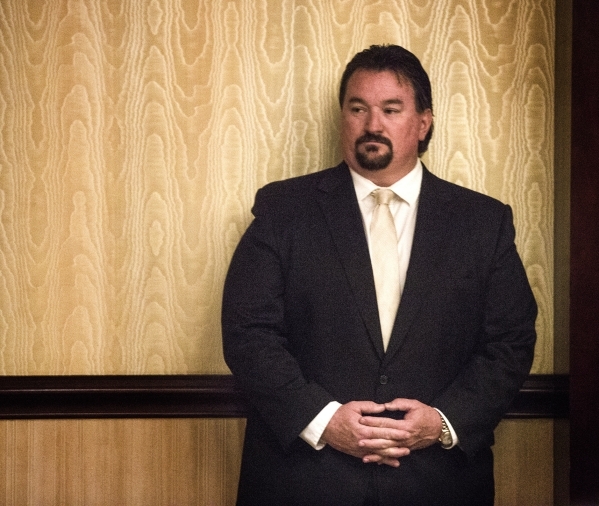 Last week, in urging Nevada Republican Party Chairman Michael McDonald to resign his position, we wrote: “No political figure in the state has dived eagerly, head-first, into so many ethical swamps.” We were wrong. McDonald doesn’t merely dive into the stagnant waters of impropriety. He does cannonballs, soaking everyone around him with the stench of his arrogance and sense of entitlement.

As reported last week by the Review-Journal’s Sandra Chereb, McDonald has parlayed his position as the marginalized head of a diminished party outfit into a public-sector juice job. Since July 20, McDonald has been employed as deputy state treasurer at an hourly wage of $45.59, according to state personnel records. Including benefits, his annual total compensation tops $100,000 per year.

McDonald was hired by Republican state Treasurer Dan Schwartz, his ally in the conservative wing of the party that keeps McDonald in charge of the state organization. McDonald, a former Las Vegas police officer and Las Vegas city councilman, doesn’t have any kind of finance background — unless you count the loan provided by a charity he helped oversee to a business he had ties to.

As reported by Review-Journal columnist John L. Smith, McDonald served on the board of the nonprofit Miracle Flights for Kids when it loaned $2.2 million to Med Lien Management in 2013. Records from the bankruptcy filing of the company’s principal say McDonald scored a $200,000 finder’s fee for brokering the loan and was a 33 percent partner in the business, which subsequently defaulted on the loan and moved into Nevada Republican Party headquarters. Now McDonald, individually and as chairman of the state party, is a defendant in a lawsuit brought by the nonprofit that alleges it was scammed.

McDonald has denied wrongdoing, but when the loan scandal and McDonald’s obvious conflict of interest are piled on top of his past pocket-lining, he’s clearly unfit for an administrative post within a public agency. As a councilman, McDonald accepted untold thousands of dollars in “consulting” fees from strip club owners Michael Galardi and Rick Rizzolo, who wound up in federal prison; Galardi took three former county commissioners with him.

But Mr. Schwartz has no interest in examining McDonald’s long list of ethical lapses. Through a spokesman, Mr. Schwartz defended the hiring of McDonald. “We have looked into and are not concerned about the various issues referenced. The allegations appear false and reflect more the assumptions of their authors rather than any factual basis.”

McDonald will handle “community outreach,” as ambiguous a job description as can be written — and a responsibility carried out by many other local political figures who’ve been juiced into no-work, no-accountability government jobs over the years. Mr. Schwartz’s relationship with McDonald and his blind eye to the former councilman’s present and past make it reasonable for taxpayers to suspect that they’ll be paying McDonald for party work on public time.

The treasurer’s office has been charged with managing Nevada’s new Education Savings Accounts, the most important school choice reform the country has seen in years. McDonald’s presence in the office is a stain and a distraction at a time when the entire nation is watching how a legal challenge to the constitutionality of ESAs plays out.