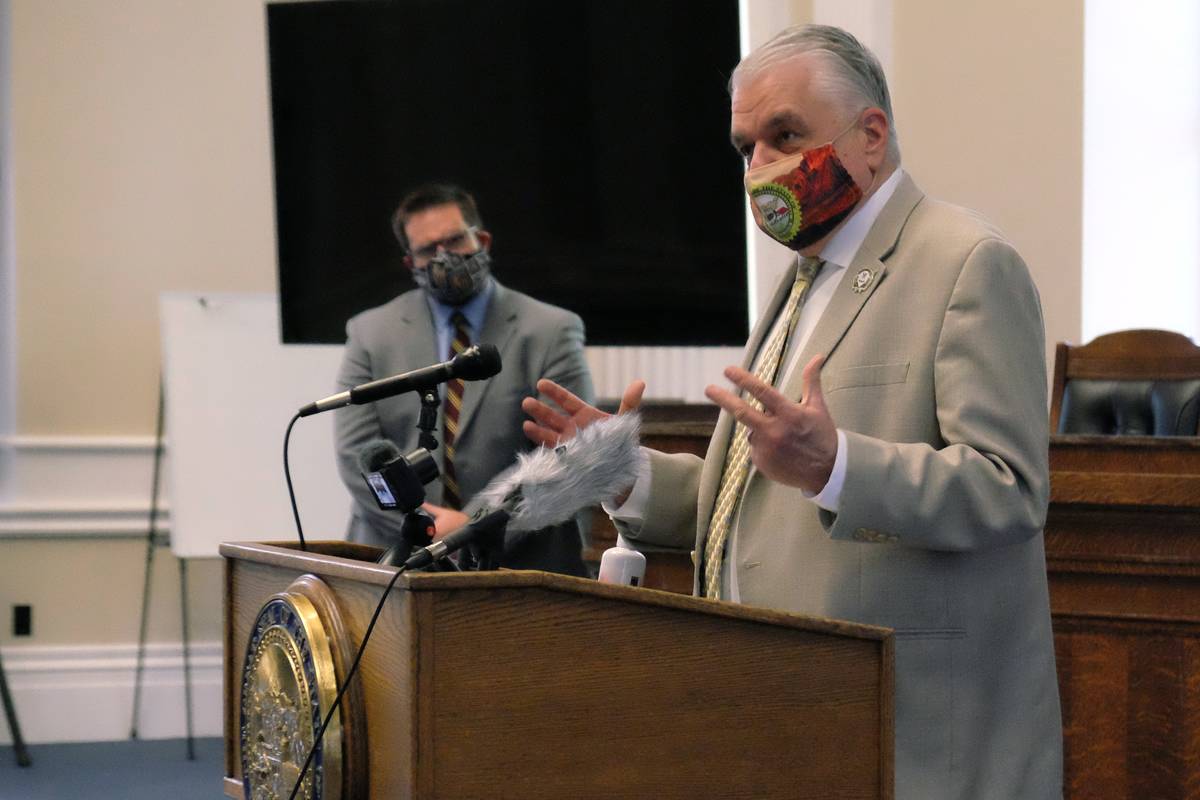 Gov. Steve Sisolak at a press briefing at the Capitol Monday on the state's new COVID-19 mitigation and assessment strategy. Behind him is Caleb Cage, the state's COVID-19 response director. Aug. 3, 2020. (Bill Dentzer/Las Vegas Review-Journal)

The unprecedented coronavirus shutdowns put untold strain on state unemployment systems. But the ongoing disaster that is Nevada’s jobless bureaucracy isn’t solely the fault of the pandemic. Gov. Steve Sisolak’s administration has exacerbated the problem.

For months, Nevadans have dealt with the fallout of coronavirus and the shutdowns. Hundreds of thousands of Nevadans lost their jobs. The state had the nation’s highest unemployment rate, which exceeded 30 percent in May. That would be hard enough in normal times.

But Nevada’s overwhelmed unemployment system has compounded the difficulties. The Review-Journal has shared the stories of numerous people who’ve spent weeks dialing the unemployment office to no avail. Instead of getting through, they’ve faced busy signal after busy signal.

These problems were obvious early in April. For example, Nevada processed 79,000 claims during the week ending April 4. That was nine times more than the highest volume week of the Great Recession. More than 624,000 unemployment claims have been filed this year. More than 600,000 of those came after the first week of March.

To relieve the backlog, the Nevada Department of Employment, Training and Rehabilitation, which oversees the unemployment office, hired the call center Alorica in April. This sounded like a good move. Unemployed Nevadans needed more people answering the phones and available to help them get the money they were counting on to survive.

It didn’t work. Four months later, laid-off workers still have trouble getting through to a representative. And even if a miracle occurs, they may not get the help they need as those who answer the phone often lack details.

“The call center people are incompetent. They don’t have the tools or the resources or the access to effectively tell you what the problem is,” said Michelle Lau, an unemployed Nevadan. Despite being out of work for more than five months, she’s yet to receive her benefits. “I don’t know if they (DETR) know what the call center is doing. They must.”

“There’s actually nothing in here that says, ‘We’re going to do a good job,’ ” Coline Talyor, CEO of the contact center consulting firm The Taylor Reach Group Inc., said after reviewing the contract. “Because 100 is such a nice round number, it looks to me that somebody pulled it out of the air. There’s no service level, no handle time estimated — both of which would be indicative of somebody having done an analysis — so I don’t suspect they did one.”

The contract, which pays up to $5 million, runs through the end of December.

Where is the accountability here? Who reviewed and approved this deal? Gov. Sisolak fired the DETR director in April. But it’s doubtful she green-lighted the legal language.

This whole thing stinks — and the smell isn’t subsiding. Earlier this month, the governor appointed Elisa Cafferata to lead the agency. She was working as a deputy administrator for Nevada’s Welfare Division. Before that, she was the CEO of Nevada’s Planned Parenthood organization. It seems unlikely a political crony will be effective at streamlining a beleaguered bureaucracy, but one can hope.

Then there’s the massive unemployment fraud. U.S. Attorney Nicholas Trutanich charged a Las Vegas man for having almost a dozen Nevada unemployment benefits cards that didn’t belong to him. He also had a dozen debit cards from Arizona unemployment office. This is almost certainly the tip of the iceberg. Mr. Trutanich said the system “is being further overwhelmed by fraudsters.”

It’s not Gov. Sisolak’s fault that Nevada’s unemployment office was overwhelmed in March. That was the inevitable result of a previously unfathomably rapid increase in layoffs. But it’s August, and the bureaucratic bungling continues. Nevadans deserve more from the governor on the state’s jobless mess than intermittent news briefings and excuses.