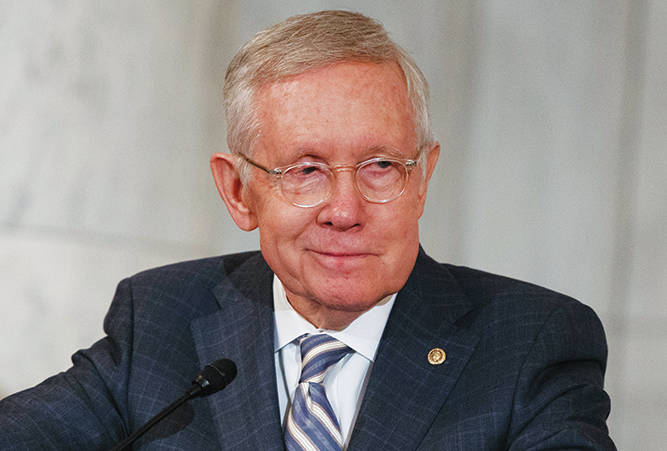 I am a branding, marketing and promotion expert. I’ve used branding techniques to build several million-dollar businesses. I lecture on “Branding — American Style” all over the globe.

No matter where I go in the world, when I say I’m from Las Vegas the reaction is amazing and instantaneous. Whoever I’m talking to smiles, laughs and screams, “Vegas baby! Wow!” Just the mention of those two magic words makes everyone in the world stop like I’m in one of those old E.F. Hutton television commercials.

Those two magic words are “Las Vegas.” Not “Harry Reid.” Outside America no one has any idea who Harry Reid is. Inside America even 90 percent of Democrats haven’t a clue who Harry Reid is. Don’t believe me? Watch those “man in the street” polls taken on “Jimmy Kimmel Live.” They asked people who Joe Biden was last year. You know, the vice president of the United States for eight consecutive years. No one knew. Biden was anonymous to typical Americans.

So, trust me, even most Democrats haven’t a clue who Harry Reid is.

But I guarantee you most of the 62 million Donald Trump voters know the name. Republicans outside Nevada despise Harry Reid. He is Public Enemy No. 1. This is a reality. It doesn’t matter if you like him or you think he “brought home the bacon” for Nevada.

To Republicans nationally, Harry Reid is the vicious politician who carried Obama’s water for eight years; who shoved Obamacare down our throats; who fought for open borders and illegal immigration; who made sure we all were taxed and regulated to death. To many Republicans, he is also a symbol of corruption and hyper-partisanship in Washington, D.C.

By the way, I hate to break this to Democrats, but tourists are upscale. Our hotels are very expensive. So are Vegas restaurants, spas, shows and golf courses. The tourists visiting this town have to have money. Our tourists are middle class and above. A huge number of conventioneers are upscale business executives. That means a large majority of Vegas tourists voted for Trump.

Hell of a branding idea.

Democrat politicians in Carson City have one thing in common: None of them has ever run a successful business. They know nothing about branding or, in this case, about destroying a brand with a name that inspires anger and negativity.

Harry Reid’s name on our airport would be the worst branding disaster in business history. It would be an albatross to Vegas tourism. His name makes 62 million Republicans want to vomit or throw stones — or both. Every time the pilot announces “We are beginning our descent into Harry Reid Airport” passengers will gag.

Is that the first reaction you want a Vegas visitor to have?

We are the tourist capital of the world. The No. 1 rule of tourism is to keep politics out of it. Have you noticed any Hilton, Hyatt or Marriott hotels named after Republicans or Democrats? Our airport shouldn’t remind anyone of partisan politics.

The truth is having the airport named after Pat McCarran is a bad idea, too. His name means nothing to more than 40 million tourists a year — many of them international travelers.

So first, let’s kill this ridiculous partisan idea of equating Vegas tourism with Harry Reid. That’s a disaster waiting to happen. Secondly, let’s get rid of the McCarran name, too.

Wayne Allyn Root (Wayne@ROOTforAmerica.com) is a best-selling author and host of “WAR Now: The Wayne Allyn Root Show” from 3 p.m. to 6 p.m. daily at 790 Talk Now. His R-J column runs Thursday and Sunday.