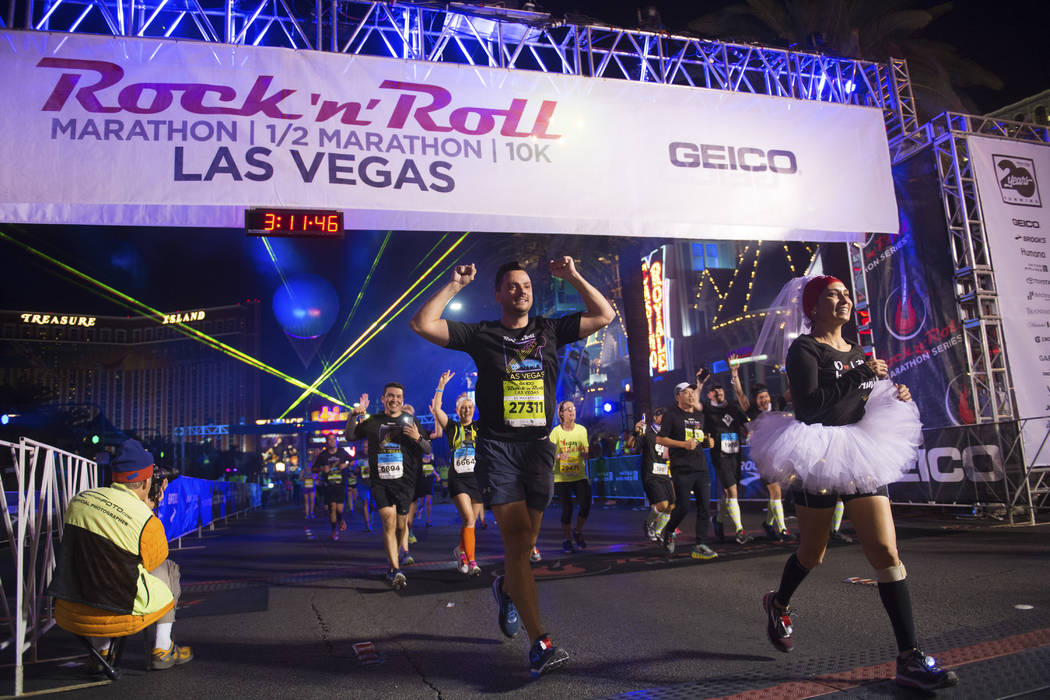 More than 40,000 registered participants from 50 states and 86 countries will venture to Las Vegas to participate in marathon weekend as the Rock ‘n’ Roll Las Vegas Marathon returns with a 5K, 10K, marathon and half-marathon.

As runners prepare to flood the Strip, shutting it down Sunday night, here are five things to know:

It’s not just one and done for the Rock ‘n’ Roll Marathon.

The Health & Fitness Expo kicked off Thursday at the Las Vegas Convention Center and runs through Saturday.

Runners must pick up their bib number and materials there before they run. There also will be more than 80 exhibitors with plenty of giveaways.

The running gets underway with the 5K on Saturday night and then on Sunday, the 10K, marathon and half-marathon will happen simultaneously along the Strip.

The pre-race headliner, which moved last year to Saturday after the mass shooting on the Strip, will again return to Sunday afternoon right before the race.

Capital Cities will perform from 3-4:15 p.m. for racers at the start line festival with a DJ before and after the band.

Other bands and DJs will perform along the route, including rock, pop, jazz and alternative bands.

Also along the route, runners can get married, this time at The Park at Mile 4.

Along with the pre-race headliner, which last year was set for Las Vegas Village, the Rock ‘n’ Roll Marathon moved its start line away from the Mandalay Bay following the shooting, opting instead for a start line near New York-New York.

Organizers moved the start line for the marathon and half-marathon again this year, starting it between Harmon and Park avenues.

Runners will head south around the Welcome to Fabulous Las Vegas sign before heading back north.

The finish remains unchanged near the Mirage.

What else is new?

The start line location isn’t the only new thing about this year’s race.

The marathon will have start-line-corral markers that light up, making it easier for runners to identify their start area.

Also, a new aid-station markers have been added, letting runners know what they can pick up at each station. Also pacer sights and mile markers will be larger and easier to identify.

Shut down the Strip

Both the marathon and the last day of the PBR World Finals will take place Sunday, setting up for some potential traffic frustration.

But if you’re planning on driving in the area on Sunday, consult runrocknroll.com/en/events/las-vegas.