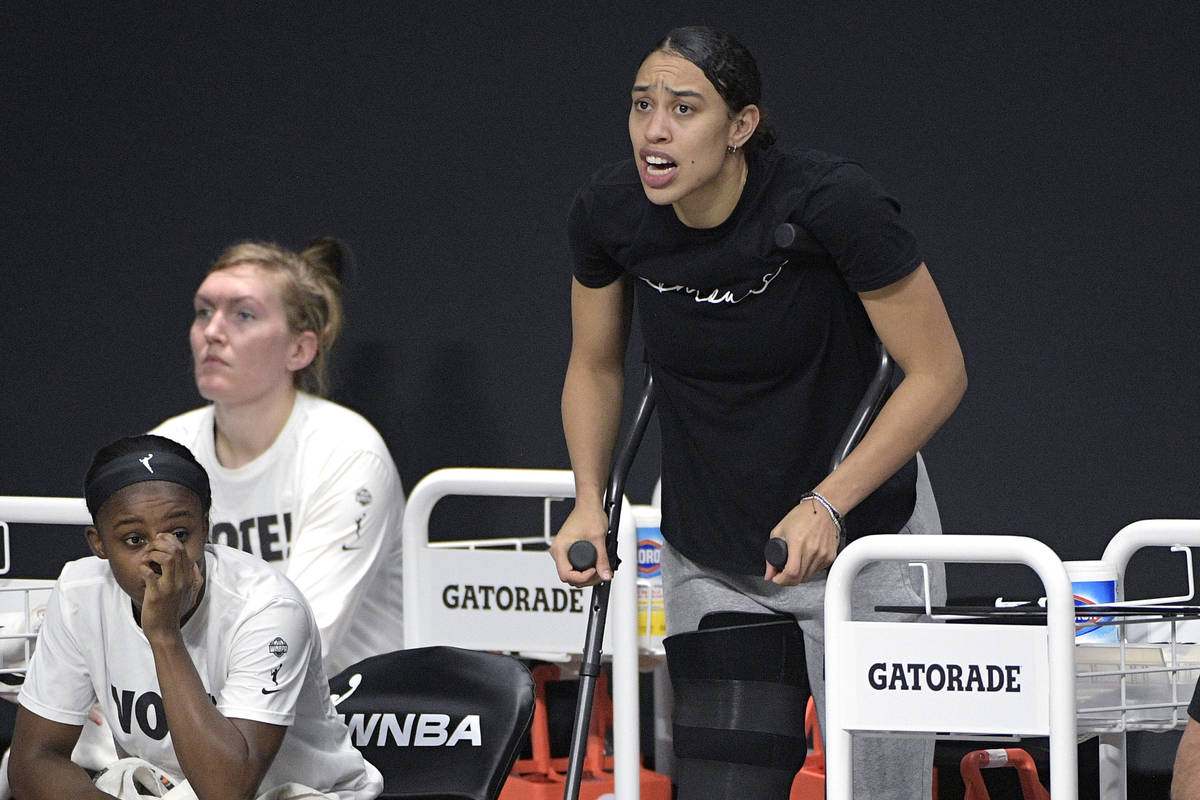 Las Vegas Aces forward Dearica Hamby, center, calls out words of encouragement from the bench area during the first half of Game 5 of a WNBA basketball semi-final round playoff series against the Connecticut Sun, Tuesday, Sept. 29, 2020, in Bradenton, Fla. (AP Photo/Phelan M. Ebenhack)

When the season began, the Aces were expected to be in the middle of the pack of the WNBA standings.

The Seattle Storm were the preseason favorite to win the championship, like they did the last time they had everybody healthy in 2018.

The Aces defied their expectations and the Storm lived up to theirs, and they will meet with the title on the line in the best-of-five WNBA Finals. Game 1 is at 4 p.m. Friday in Bradenton, Florida.

“Just knowing we have a chance to play in the finals and win the championship is crazy,” Aces guard Kayla McBride said. “You remember watching those games, but just being here it’s about being present and being in the moment.”

The Aces and Storm tied for the league’s best record at 18-4, but the Aces grabbed the No. 1 seed by virtue of sweeping the two regular-season games between them.

While the Aces had to rally from 2-1 down to win a brutally physical five-game series against the seventh-seeded Connecticut Sun, the Storm cruised to a three-game sweep of the fourth-seeded Minnesota Lynx.

Here are three keys for the Aces to win the WNBA title.

The Storm have six players who shot 35 percent or better from 3-point range, including Alysha Clark’s league-best 52.2 percent and Sue Bird’s 46.9. Bird didn’t play in either game against the Aces in the regular season.

That makes the loss of Dearica Hamby particularly problematic for the Aces. Hamby, a 6-foot-3 forward who was named the WNBA’s Sixth Woman of the Year for the second straight year, suffered a right knee injury in the first quarter of Game 3 against the Sun.

She played the rest of that game but missed the last two games of the semifinals and won’t play in the finals.

“It’s a mobile post player that can guard their bigs, so that hurts us pretty substantially in this series,” Aces coach Bill Laimbeer said. “At the same time, we’re who we are. We went through the last series that way.”

Losing Hamby makes guarding Storm forward Breanna Stewart, the 2018 WNBA MVP and one of the most versatile players in the league, even more of a challenge. The 6-foot-4 Stewart scored 19.7 points per game this season and shot 36.8 percent from 3-point range.

Picking up the pace

Both teams like to get up and down the floor, so the Aces aren’t expecting the same kind of physicality they saw from Connecticut.

That’s a welcome change, since it should allow them to play the free-flowing type of game they prefer.

“It definitely was brutal. We were just talking about how many bruises we all have,” Aces guard Danielle Robinson said. “It’s still going to be physical because it’s the finals. But not so much of a bang game and definitely not the same kind of matchup.”

The Aces led the league in scoring and pace during the regular season. They , will likely use a small lineup at times to play fast and not allow the Seattle defense to get set.

Two of the keys in most playoff series are not turning the ball over and controlling the boards, especially earning second chances on the offensive end.

The Aces should have an edge on the boards. They were the league’s best in the regular season, grabbing 52.9 percent of all rebounds while Seattle was seventh at 49.4 percent.

They were also the league’s best at taking care of the ball, with 15.2 percent of their possessions ending with a turnover. The Storm were fourth with 17.3 percent.