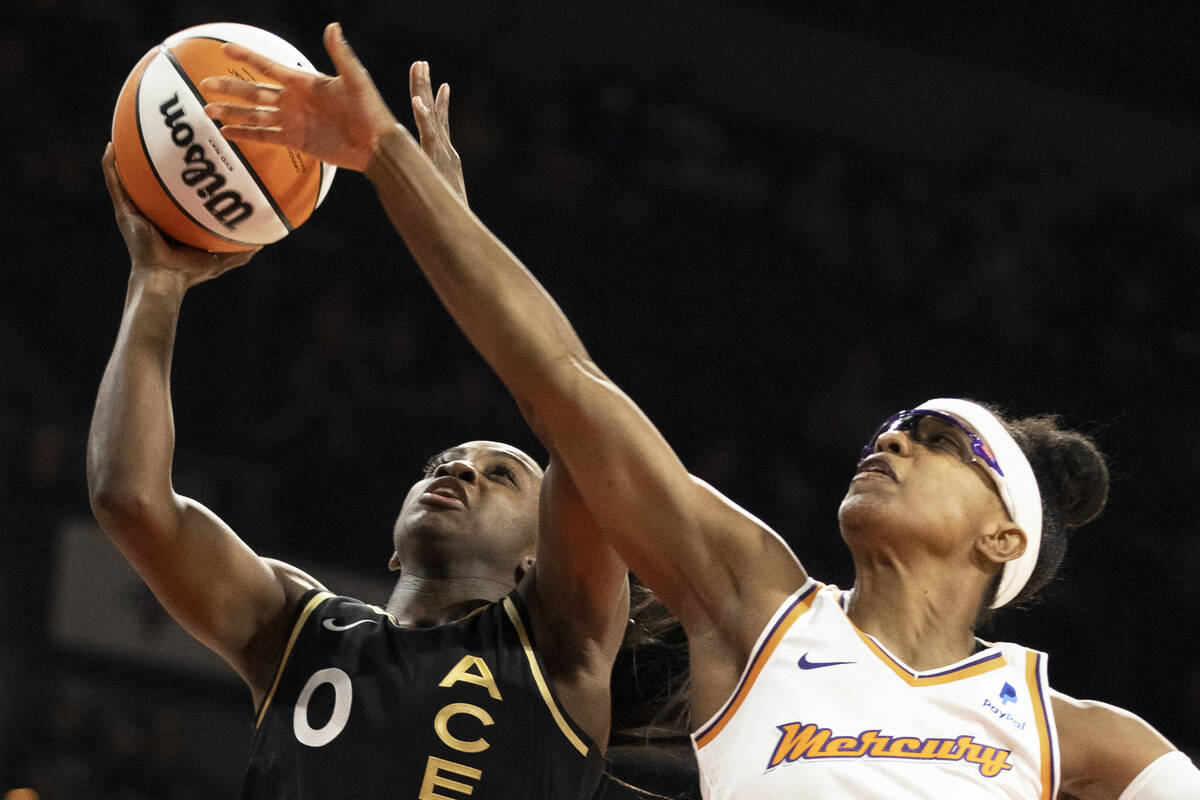 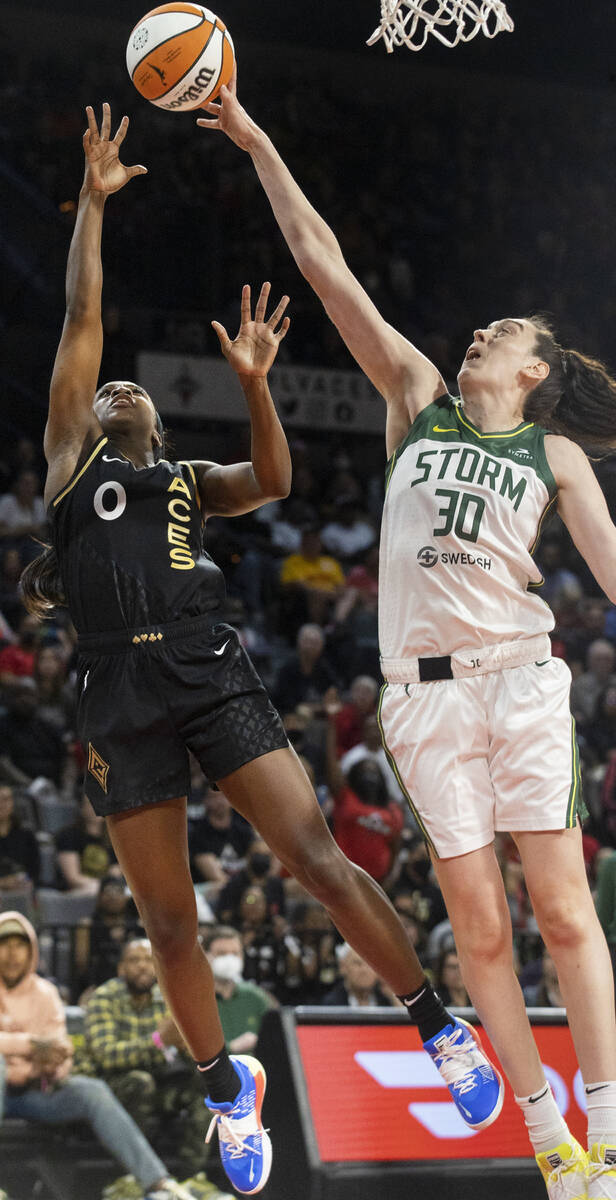 Aces guard Jackie Young (0) has her shot contested by Seattle Storm forward Breanna Stewart (30) in the first half of a WNBA basketball game on Sunday, May 8, 2022, at Michelob ULTRA Arena, in Las Vegas. (Benjamin Hager/Las Vegas Review-Journal) @benjaminhphoto

“I don’t think she has a ceiling right now,” said Hammon, the team’s first-year coach. “I think she’s going to be as good as she wants to be.”

Young, a 6-foot wing from Notre Dame, has always possessed the physical gifts, work ethic and basketball mind to be a star. Her talents convinced the Aces to make her the No. 1 overall pick in the 2019 WNBA draft.

Now, Young is starting to believe in herself, too.

“For me, it’s a mindset thing,” she said. “If I’m coming in feeling good, confident and aggressive, then it shows on the court.”

Young, 24, has been a revelation this season for the 4-1 Aces, who host the Minnesota Lynx on Thursday night at Michelob Ultra Arena. She’s averaging 18 points, tied for the team lead with guard Kelsey Plum, and shooting 55.2 percent from the field and 46.2 percent from 3-point range.

Her improvements are already being rewarded. Young agreed to a two-year contract extension Sunday that will keep her with the Aces until at least 2024.

Young credits her strong start this season to her time abroad and offseason preparation. She played in Australia’s Women’s National Basketball League for the Perth Lynx and helped the team to a second-place finish.

The Princeton, Indiana, native spent a lot of time in the weight room, refined her skills on the court and focused on her nutrition in Australia. Her training included boxing and a heat chamber.

Her teammates noticed a difference during training camp. Plum said she thought Young’s jump shot had improved, along with her defensive intensity.

But the biggest change the Aces noticed was Young’s confidence. Forward Dearica Hamby said the team had always seen flashes of Young’s ability, but her consistency this season has stood out.

Forward A’ja Wilson said she thinks Young struggled to understand her role as a rookie. Wilson added that Young can be a perfectionist, which causes her to hesitate.

This season, though, Young’s renewed confidence has allowed her to slot in seamlessly.

“If she doesn’t get in her way, she’s going to be on her way,” Wilson said.

The Aces have needed everything Young has to offer. Hammon’s smaller lineups require Wilson to anchor the defense, and with All-Star Liz Cambage leaving in free agency, they’ve needed consistent scoring from others. Hammon complimented Young’s ability to shoot and attack the rim, which helps open up the offense.

Young’s defense has been just as important. She’s been the Aces’ best perimeter defender and limited Phoenix Mercury star Diana Taurasi to eight points in the Aces’ win Tuesday.

“She’s a silent assassin out there, on both ends,” Hammon said.