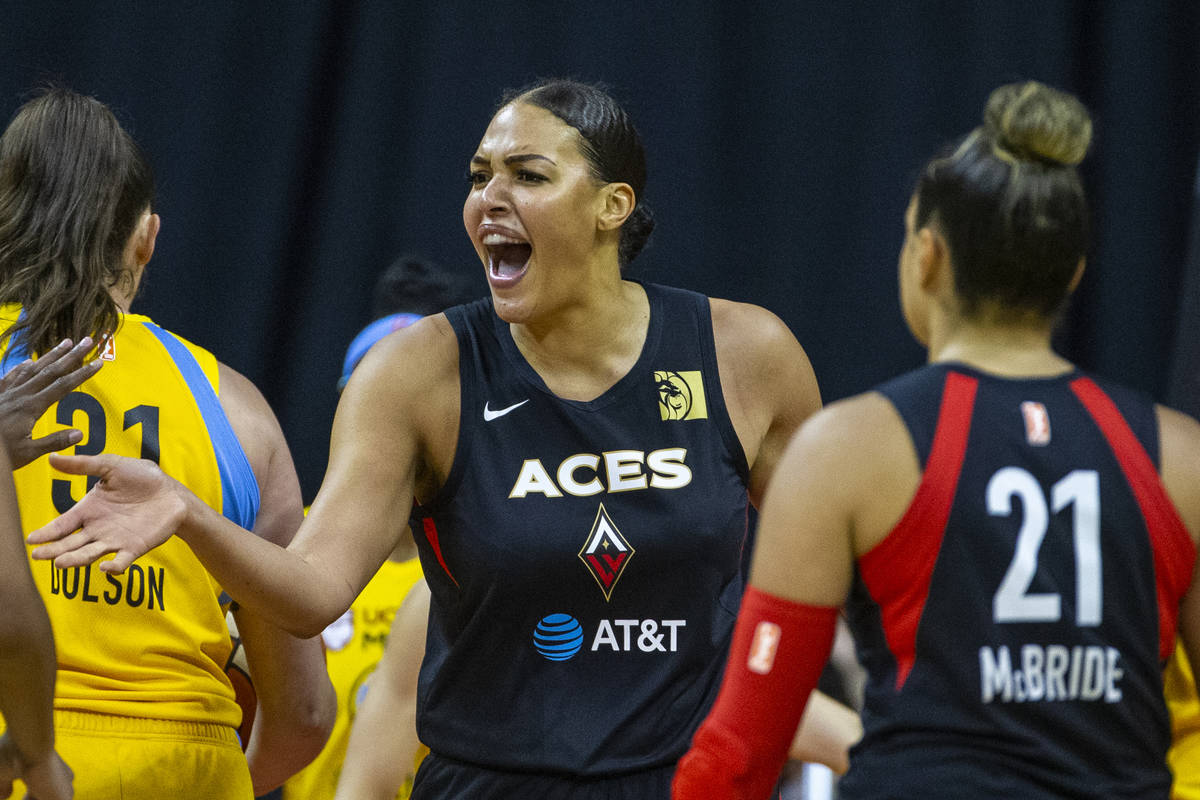 Las Vegas Aces center Liz Cambage (8) gets pumped after a basket over the Chicago Sky defenders during the first half of their WNBA playoff game at the Thomas & Mack Center on Sunday, Sept.15, 2019 in Las Vegas. (L.E. Baskow/Las Vegas Review-Journal) @Left_Eye_Images

Aces star Liz Cambage, who opted out of the WNBA season because of COVID-19 concerns, talked about her personal life in an interview with Playboy.

“I was actually having this conversation recently with one of my best friends, who I’ve known since I was 12 or 13. … Both being Black girls raised in Australia, we wore colored eye contacts, we bleached our hair, we straightened our hair. We wouldn’t tan. We would do everything to shrink ourselves and make us more white. It wasn’t until I moved to America that I started to really embrace my body and my skin color and who I really am.”

On her Playboy photo shoot:

“Me doing Playboy is me celebrating my sexuality like, ‘Yeah, I am a straight 6-foot-8 woman who likes to have sex.’ … Also being a female and in sports, I felt a lot of pressure on my (sexual identification) as well. I’ve spent a lot of years confused. Am I straight? Am I bi? Is there something wrong with me that I’m not attracted to girls? Everyone’s always expecting me to be gay. I’m like, ‘No, I love men.’”

On raising money for first responders who battled the Australian brush fires:

“I just can’t believe (how) this year has gone from my country on fire and people losing housing, losing entire cities — we lost firefighters, we lost wildlife — to being hit with this pandemic. It’s been such a hard year for Australia.”

On her support of Black Lives Matter:

“I’ve been going to protests. I’ve been out in these streets. I’ve been on TV. I’ve been in your newspapers. I’ve been talking about this for years in Australia, so I’m not new to this. I was born a fighter. … It was difficult for me to grow up. I’ve been bullied and teased ever since I can remember, and I’ve always been an easy target. So I’m resilient to it. Say what you want; it’s not going to affect me.”