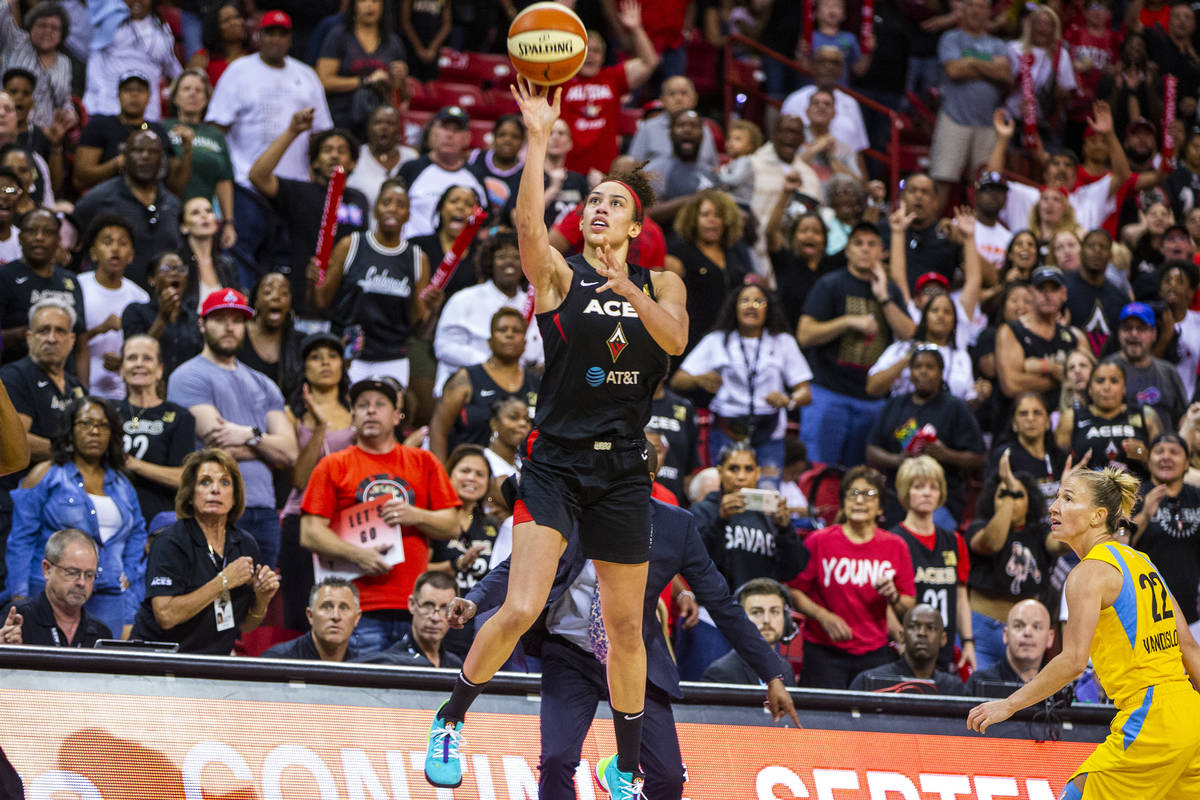 As Carolyn Swords looked on from the end of the bench, she thought her team’s season was over.

The Aces’ center admits players aren’t supposed to think that way, but the situation was dire. Chicago had a two-point lead and the ball in the one-game, second-round playoff at the Mandalay Bay Events Center.

What happened next is unlikely to ever be forgotten by any Aces fan. The Sky inbounded to Courtney Vandersloot, the league’s assist leader, who fired a pass up court near the sideline.

The pass never reached its intended target. Dearica Hamby lunged in, picked it off and started the other way. Thinking time was going to run out, Hamby threw up a shot from just inside the midcourt line with five seconds left, a running prayer that found the bottom of the net to give the Aces a shocking 93-92 victory.

“I’m not surprised Dearica was the one who made that play because she has such awesome in-game instincts and she’s always making things happen,” Swords said. “So to have the presence of mind to pressure and make the play, it was so incredible — obviously shocking, probably one of the most amazing basketball moments I’ve ever witnessed.”

The Aces will open their season against the Sky on Sunday, and it will be on a nationally televised stage on ABC.

The stunned Sky still had a chance to win the game, but Astou Ndour’s 3-pointer from the corner was off the mark.

“Everyone was just kind of in the moment and excited about what went down,” Aces forward A’ja Wilson said. “Those are things you see in March. The basketball gods were really on our side, but I always joke with Dearica that we didn’t win anything, so we still have a chip on our shoulder the same way they probably have a chip on theirs.”

Hamby had 17 points for the Aces, who watched a five-point lead with 3:32 left in the game disappear on Ndour’s 3-pointer with 24.4 seconds remaining.

This game could give both teams an early indication of where they stand. The Aces were picked to finish fourth and the Sky fifth in the Associated Press preseason WNBA power poll.

“I remember winning the game and advancing to the semifinals,” Hamby said. “Obviously, the shot gets replayed almost every day, so it’s not something you can really forget. But the emotions are coming back, and I’m really looking forward to the Chicago game.”