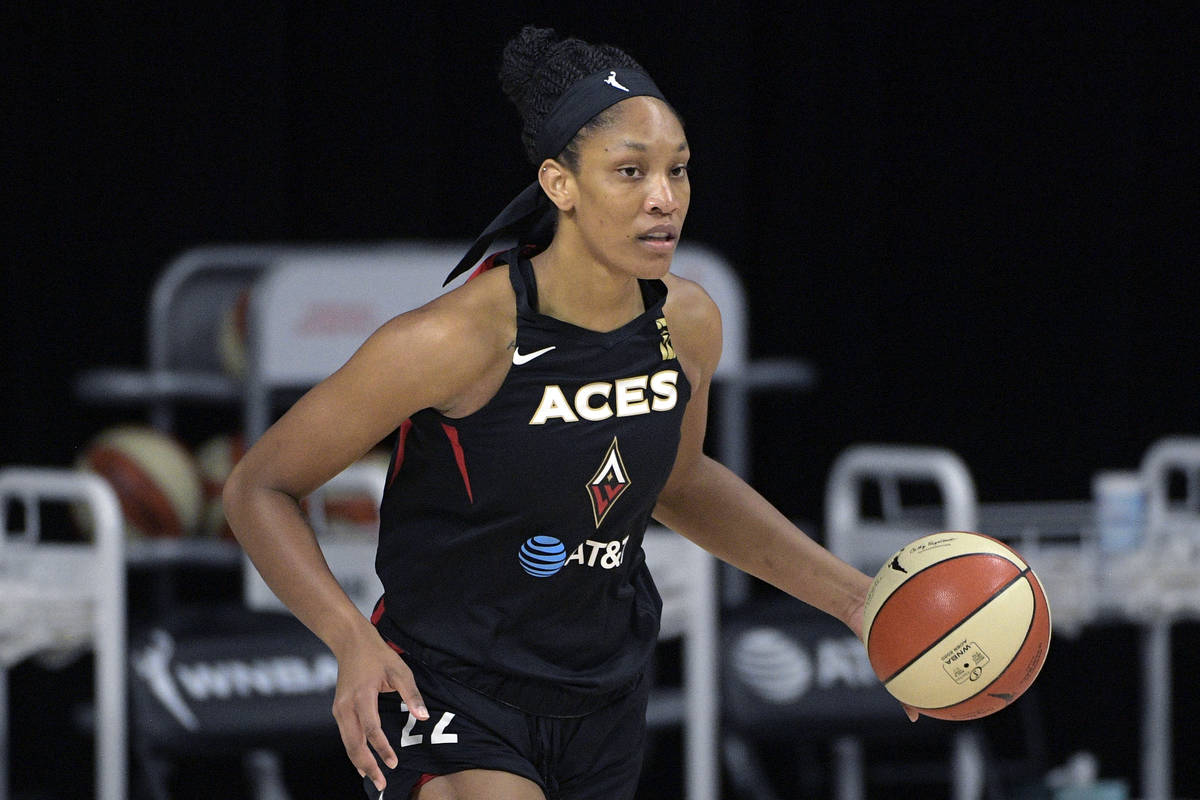 Las Vegas Aces center A'ja Wilson (22) brings the ball up the court during the first half of Game 1 of a WNBA basketball semifinal round playoff game against the Connecticut Sun, Sunday, Sept. 20, 2020, in Bradenton, Fla. (AP Photo/Phelan M. Ebenhack)

A 19-point lead dwindled to one on Thursday night at the Barclays Center in Brooklyn, New York, and Aces coach Bill Laimbeer finally had enough. Of the empty possessions. The errant jumpers.

Time for a timeout with 3:59 to play. Time for one simple instruction.

Get the ball to A’ja Wilson.

“I knew I had to do something for my team,” she said. “My only thought was to get a bucket.”

Wilson responded with a short jumper in the lane and two free throws on successive possessions to ignite a 14-3 run and propel the Aces to an 94-82 victory over the new and improved New York Liberty. The four-point spurt punctuated an MVP-caliber performance by the reigning WNBA MVP: a season-high 30 points, 13 rebounds, five assists and three blocks.

“I’m going to make sure that I can be a bucket for my team if they need me. Be the screamer and yeller if they need me on the court. Anything to get us going, I feel like it starts with me,” Wilson said.

“I can’t slack off at all. Bill is going to make that known. … At the end of the day, if it needs to be a bucket, I’m always down to get one.”

Or on Thursday, nine of them and an additional 12 free throws.

The Liberty did not have an answer for Wilson, who can drive to the rim at 6 feet 4 inches, shoot proficiently from the midrange area and score efficiently in the low post. She helped Las Vegas (6-3) secure a 40-21 lead midway through the second quarter, scoring 16 points in the first half.

But New York stayed within striking distance because reserve guard Rebecca Allen scored 14 consecutive points, helping the Liberty pull within eight at halftime. The Aces went away from Wilson and All-Star center Liz Cambage for long stretches in the second half, favoring long jumpers — especially early in the fourth quarter.

“We have to play smarter,” Laimbeer said. “We take shots out of character. I don’t know if it’s any part of me, me, me creeping in. Or whatever. But that really can’t continue.”

Wilson weathered the storm and Riquna Williams made two clutch 3-pointers to help the Aces pull away.

Jackie Young played all 40 minutes and scored 16 points for Las Vegas, helping limit Liberty (5-3) star point guard Sabrina Ionescu to 2-of-13 shooting. Dearica Hamby came off the bench to score 13 for the Aces and Chelsea Gray had 11 points and nine assists.

“We’re learning on the fly,” Gray said. “I think it’s going to take time. Our chemistry is going to come. … But imagine how we are now versus how we opened up versus Seattle. It’s improved each time, whether we win or lose.”

Kelsey Plum had four points, three rebounds and two assists for the Aces in her first game since May 18.