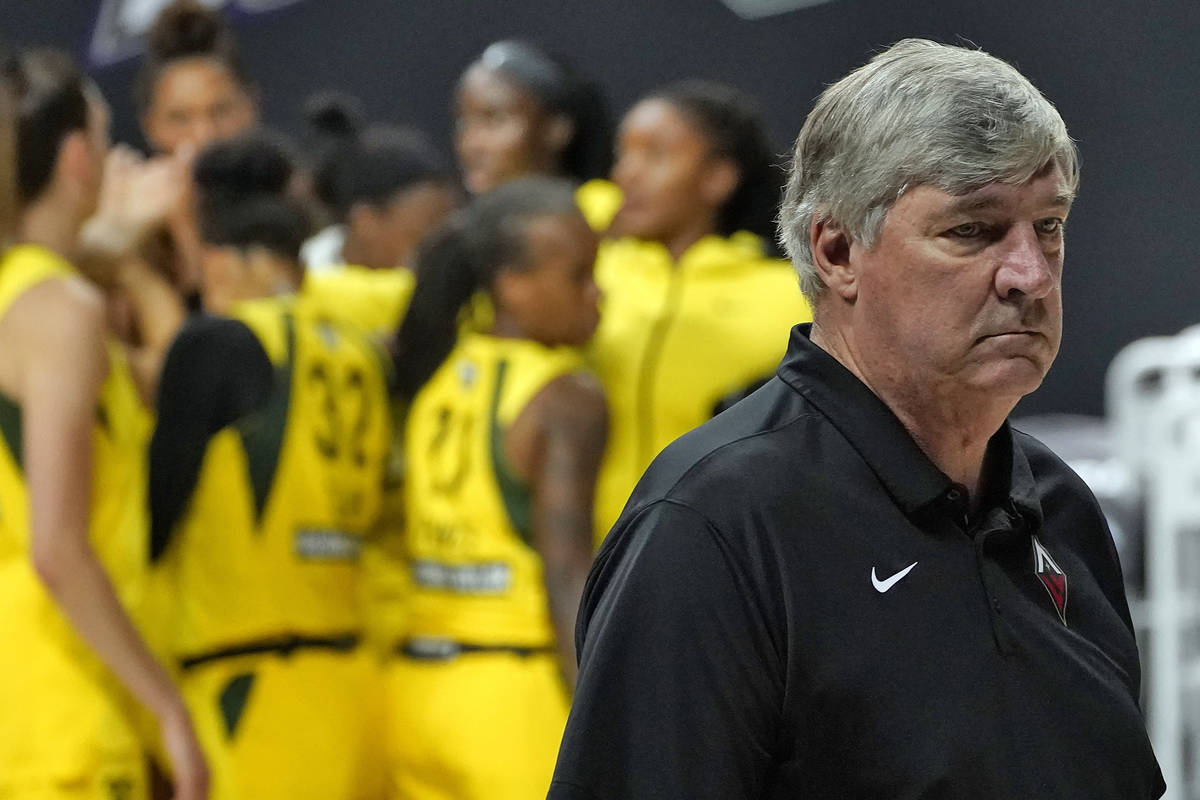 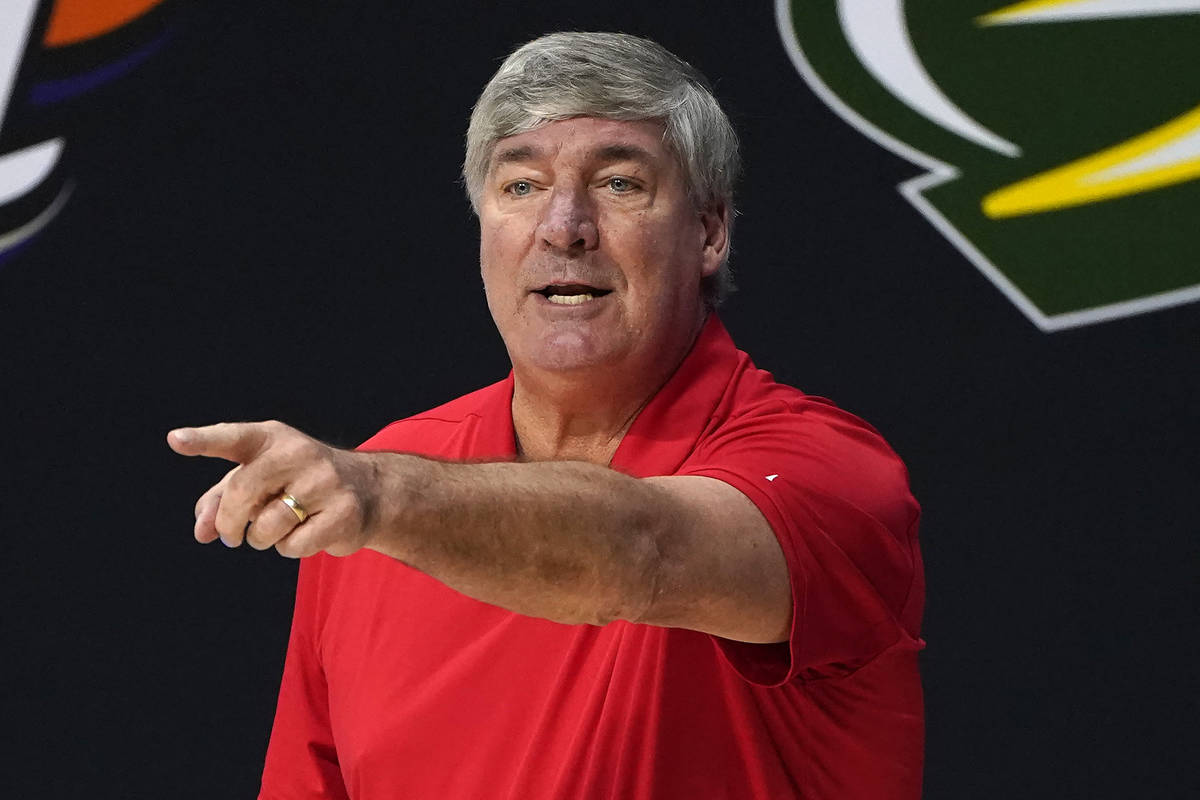 Las Vegas Aces head coach Bill Laimbeer points out a play against the Connecticut Sun during the first half of Game 4 of a WNBA basketball semifinal round playoff series Sunday, Sept. 27, 2020, in Bradenton, Fla. (AP Photo/Chris O'Meara)

As a teenager in Toledo, Ohio, Barbara Barker got a firsthand look at what it’s like to compete against Bill Laimbeer.

Barker was a friend of Laimbeer’s younger sister, Lee, and one day the three of them were playing a board game.

“I was spending the night, and Bill was pseudo-babysitting us,” said Barker, now a sports columnist at Newsday. “We’re playing Risk, and it’s like Monopoly. It can take forever. We’re tired. It’s like one in the morning, and he won’t quit. Finally, it’s clear he’s going to lose. He whips the board across the room and says, ‘I dropped the bomb,’ and walked off.”

Whether it’s a board game or on the hardwood floor of a basketball court, there’s no denying Laimbeer despises losing. Fortunately for him and the teams he’s played for and coached, he doesn’t do it often.

Laimbeer won two NBA championships with the Bad Boy Detroit Pistons in 1989 and 1990 and has won three championships as a WNBA coach with the Detroit Shock in 2003, 2006 and 2008. He’s been named WNBA Coach of the Year twice.

In his third year with the Aces, he has them in the WNBA Finals. They trail the Seattle Storm 2-0 in the best-of-five series, with Game 3 set for Tuesday.

No matter how the series turns out, Laimbeer’s three-year plan that he spoke about when he took the Aces job is complete. But he doesn’t plan for the Aces to be a one-year success story. He wants them to be competing for championships for the foreseeable future.

“The goal was to get into year three and be in a position to compete for a championship with a squad who is going to still be here,” Laimbeer said. “Our players, everybody loves Las Vegas. They love the atmosphere of the fans. They love the environment. They love how they’re being treated.”

The Aces expected to have a completely different team, but center Liz Cambage received a medical exemption for this season and guard Kelsey Plum tore an Achilles tendon in June and was lost for the season, which has taken place in the bubble at IMG Academy in Bradenton, Florida.

Things didn’t go smoothly for the Aces when they got to Florida. They never had a full contingent during training camp and had to conduct practices with as few as six players at times.

But they didn’t use that as an excuse. They shook off losing two of their first three games and went 17-2the rest of the way to clinch the No. 1 seed. Laimbeer was second in Coach of the Year voting behind Minnesota’s Cheryl Reeve.

“What Cheryl did was amazing without Sylvia Fowles, but we’re in the finals without two of our starters from last year,” Aces guard Kayla McBride said. “I think what he’s been able to do, the whole coaching staff with Tanisha Wright and Vickie Johnson, has been amazing. It would have been nice to see the entire staff recognized for that.”

In the semifinals, the Aces went down 2-1 to a red-hot Connecticut team but won two win-or-go-home games to reach the finals.

Now, in a similar situation against the Storm, the Aces know their coach won’t let them go down without a fight.

“You know he’s a competitor,” McBride said. “He is as a coach. He was as a player. He expects you to be a pro and show up and do your job. He’s his own individual. Everybody knows that, but he’s a player’s coach. He does everything he can do to make sure we have everything on and off the court.”

Some of the Aces have said Laimbeer has a calming influence over the team, especially those who are making their finals debut, because of his experience. But “calm” isn’t the word most would use to describe him.

As a player in Detroit, he was known for a physical style that won the hearts of the hometown fans while making him despised around the league. As a coach, he has built his teams with defense and rebounding as his top priorities, and they usually are at or near the top in those two categories.

“He’s a great women’s basketball coach,” said Barker, a veteran observer of the WNBA. “I think he does a great job of getting the most out of whatever talent he has, and that includes from himself. When he has a certain piece, he knows how to put pieces around that. Some people are wedded to their philosophy, but he’s willing to adjust to what he has.”

Laimbeer became interested in the women’s game by coaching his daughter Keri’s AAU team, the Michigan Monarchs, for five seasons. She went on to win three high school state championships at Country Day in Detroit before playing at Syracuse.

Laimbeer took the coaching job with the Shock in 2002 and won his first title in his second season. He left the WNBA for three years and was an assistant with the Minnesota Timberwolves in the NBA but returned with the New York Liberty in 2013.

He’s remained in the WNBA since then and has continued to be an ambassador for the growth of the women’s game.

His players know he cares about them. When Angel McCoughtry was a free agent, she said Laimbeer asked her what she planned to do after basketball. No coach had ever asked her that, and it was part of what let her know she wanted to play for the Aces.

“We know Kobe Bryant got a lot of recognition” for being an advocate for the women’s game, McCoughtry said. “But Bill’s been doing it so long. He’s just been great at it. I think he needs to get the recognition he deserves for helping the women and what he’s done fighting for us.”