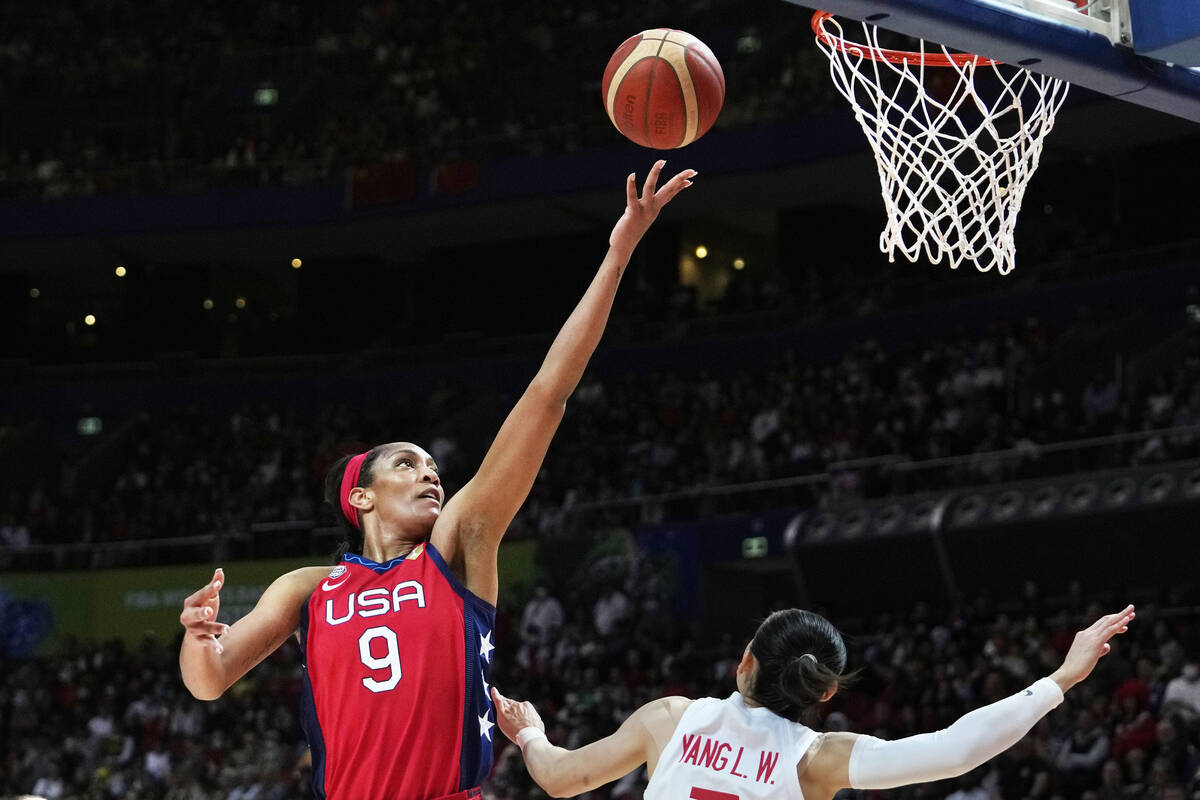 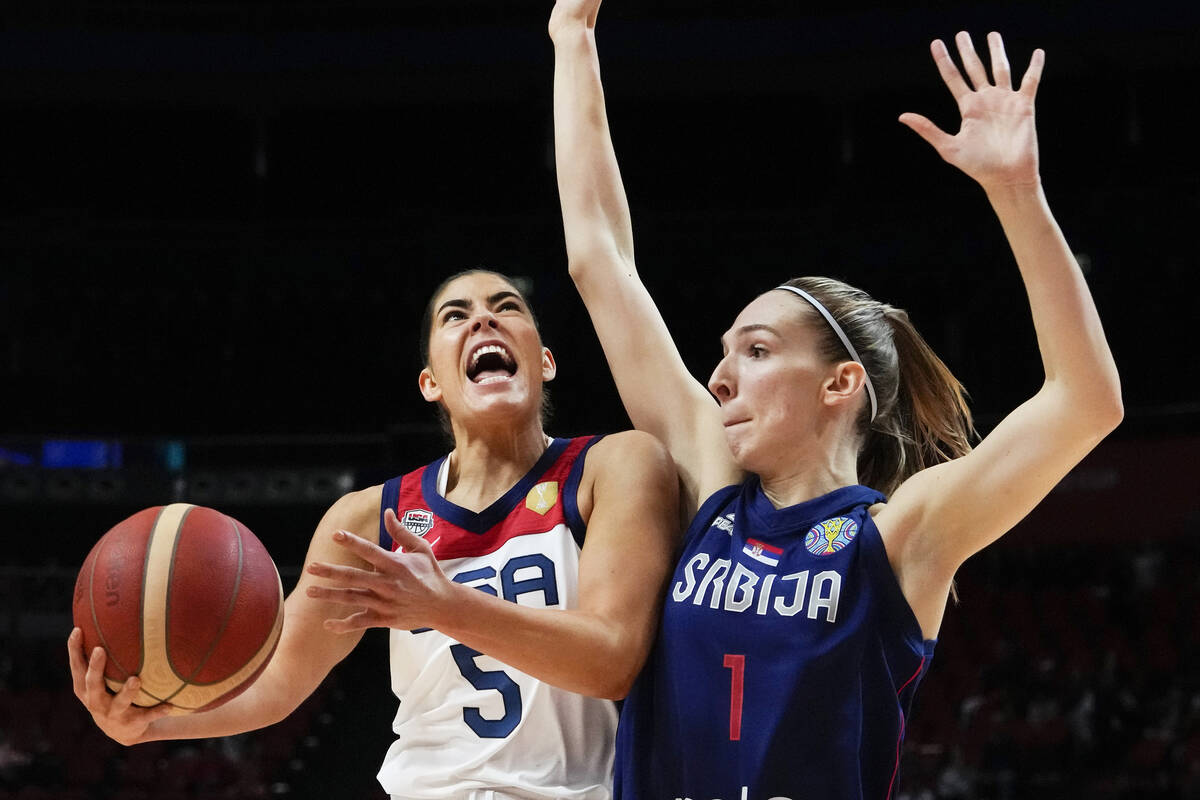 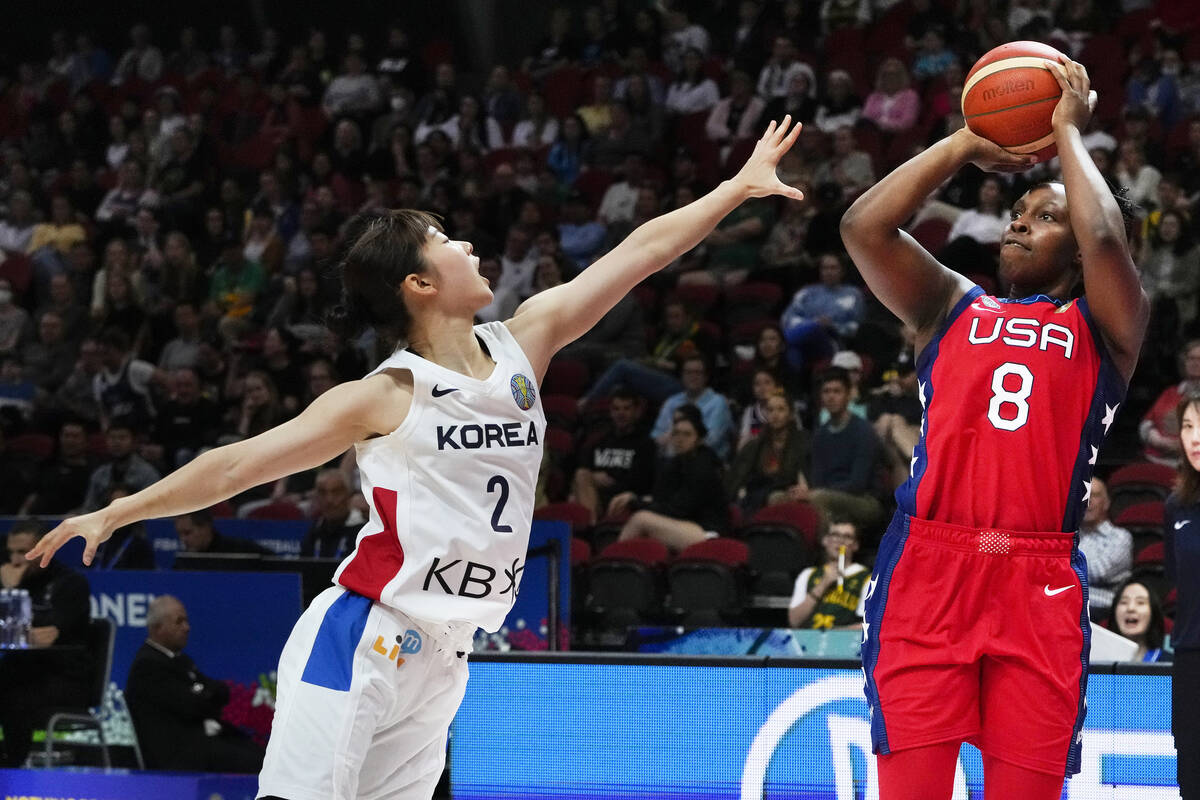 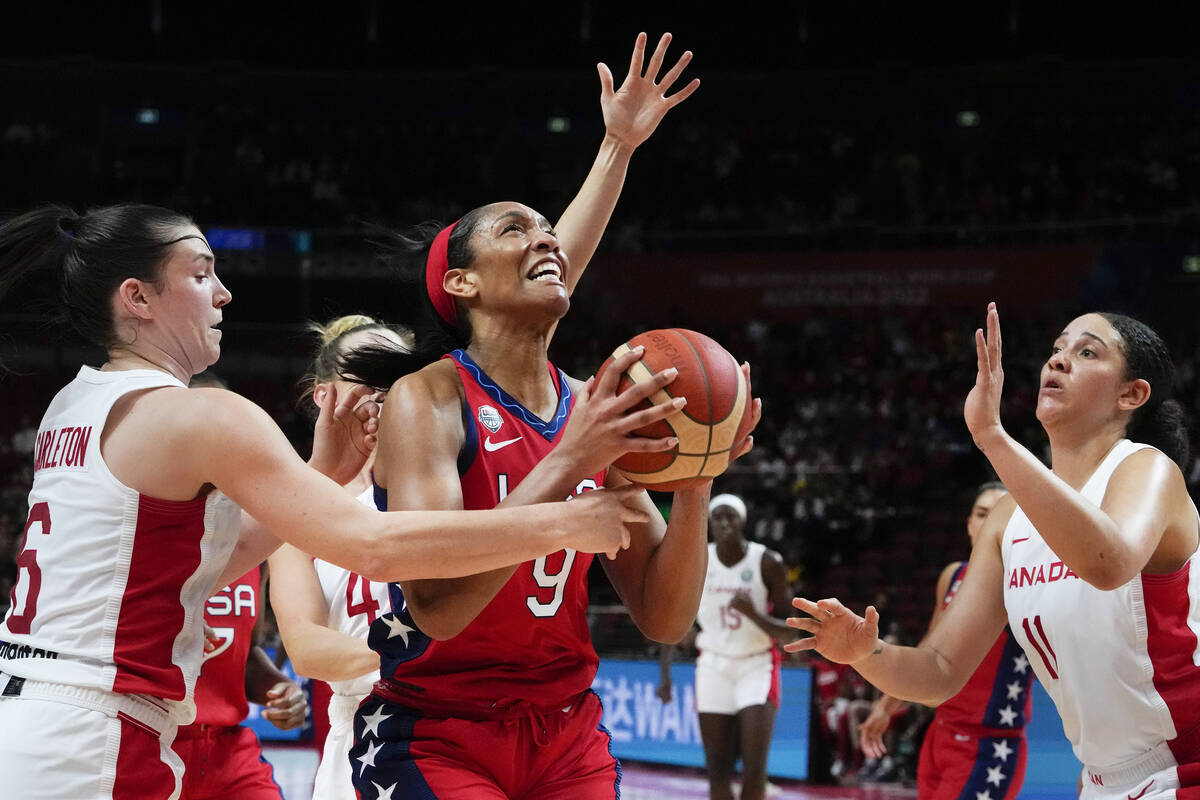 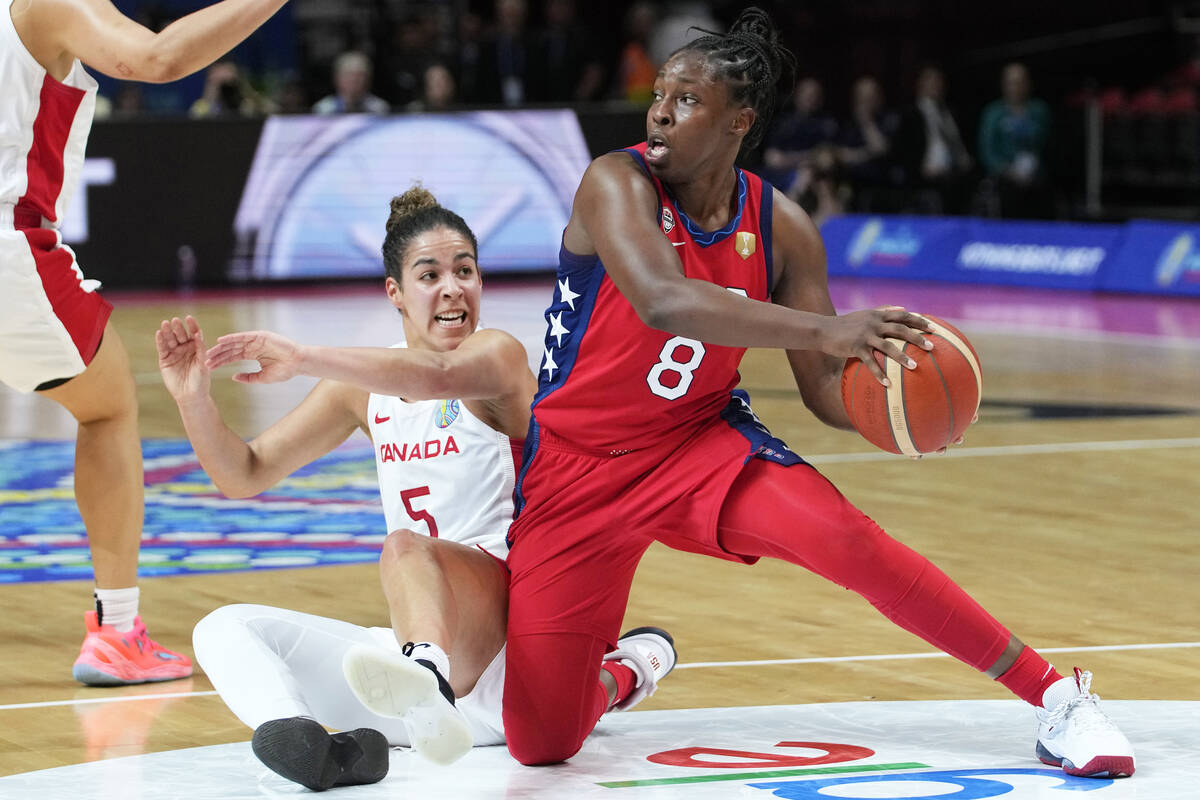 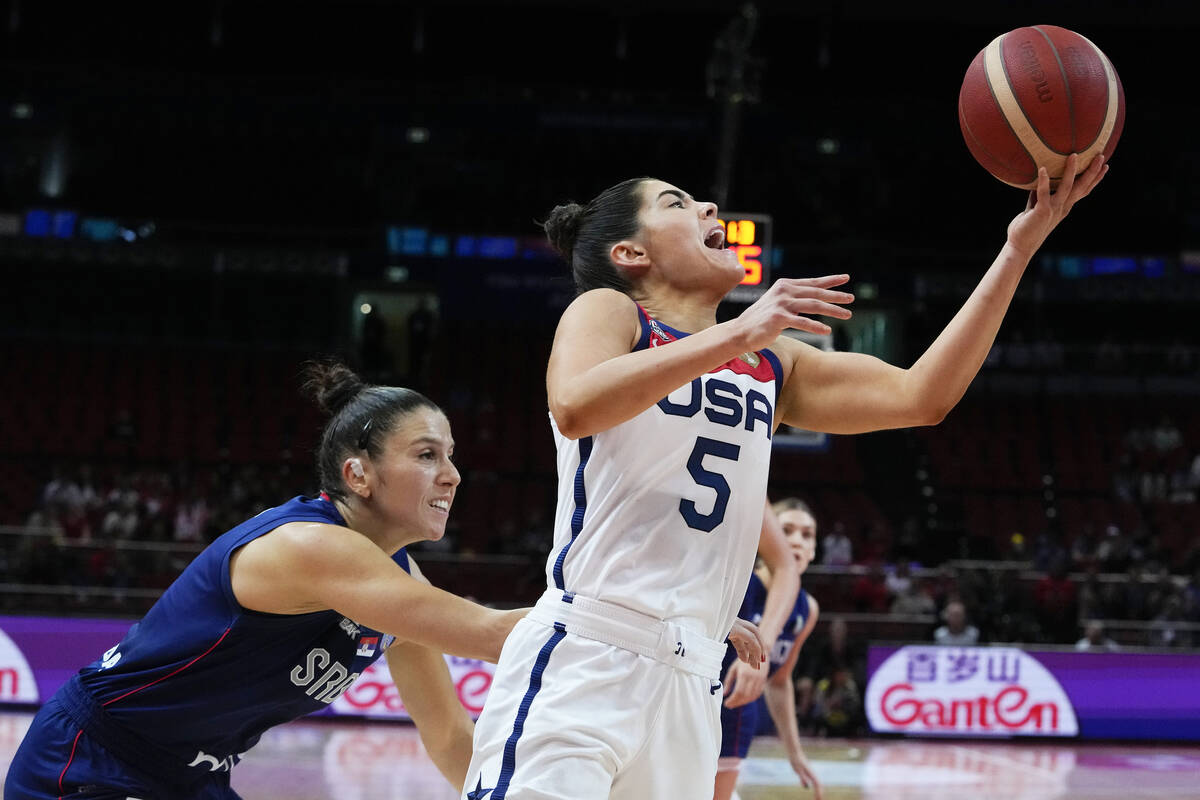 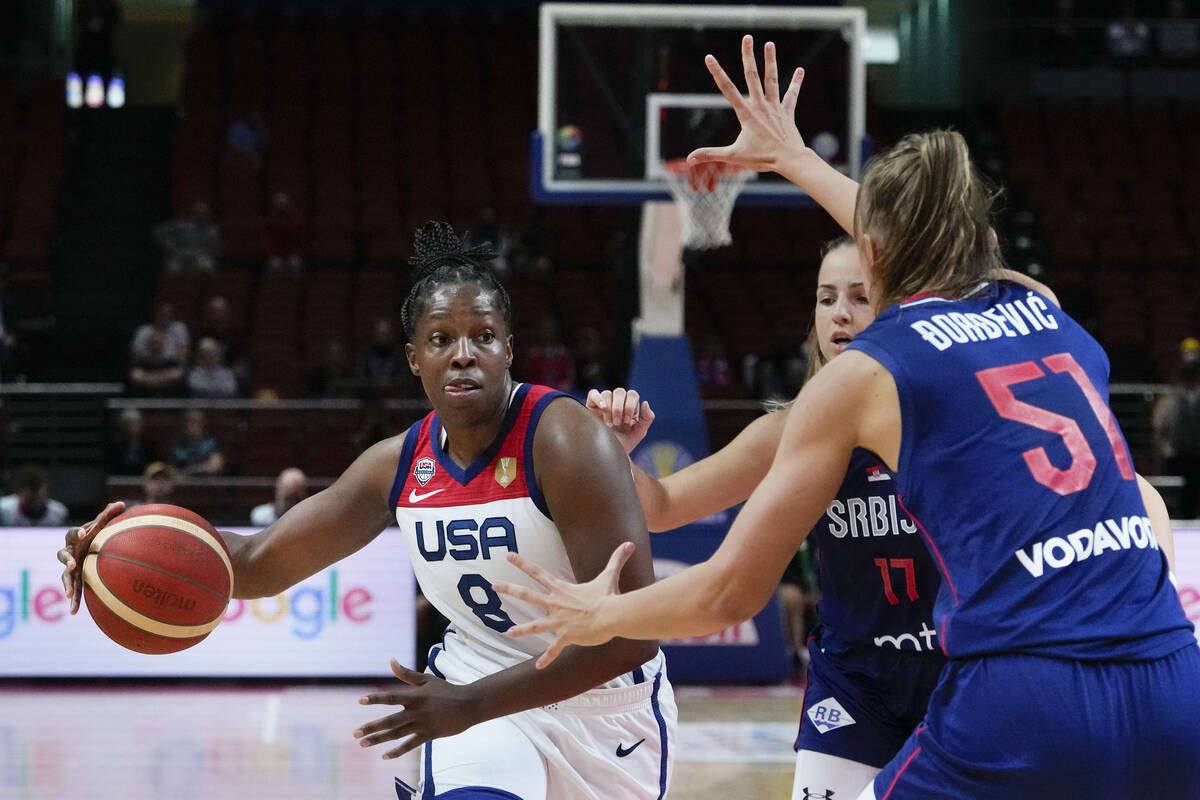 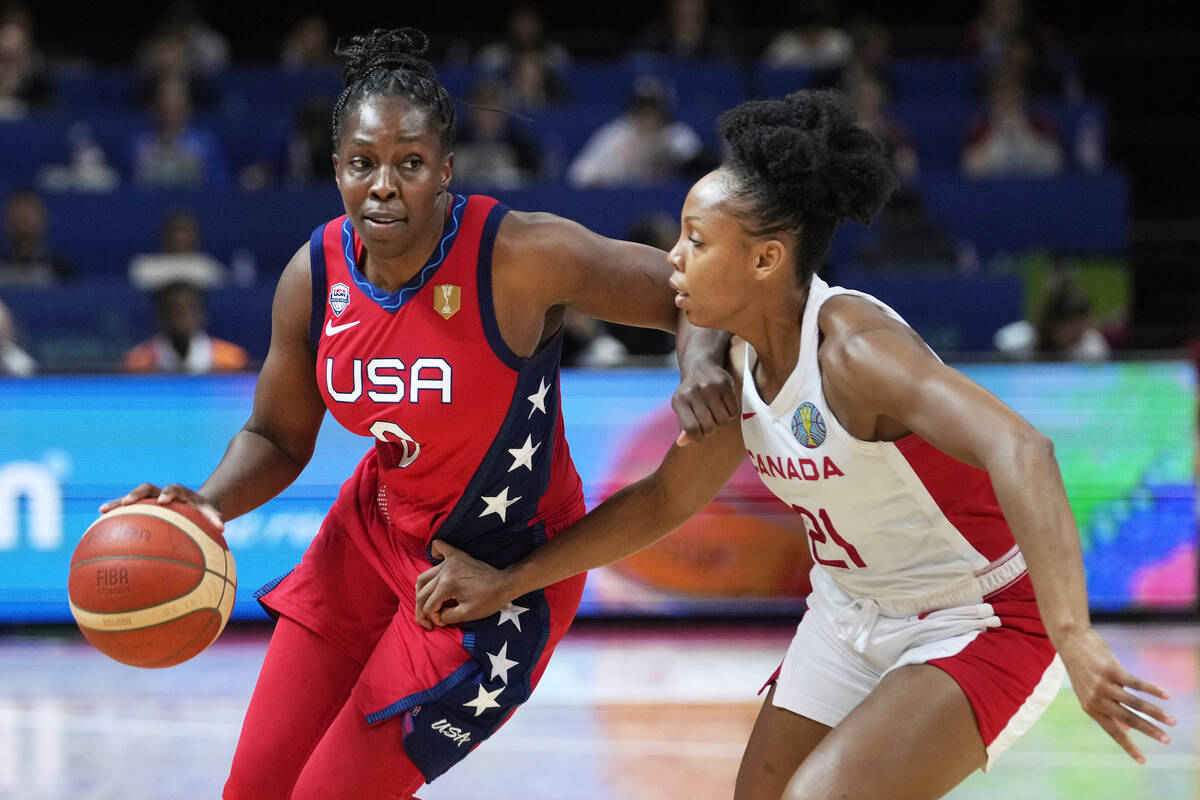 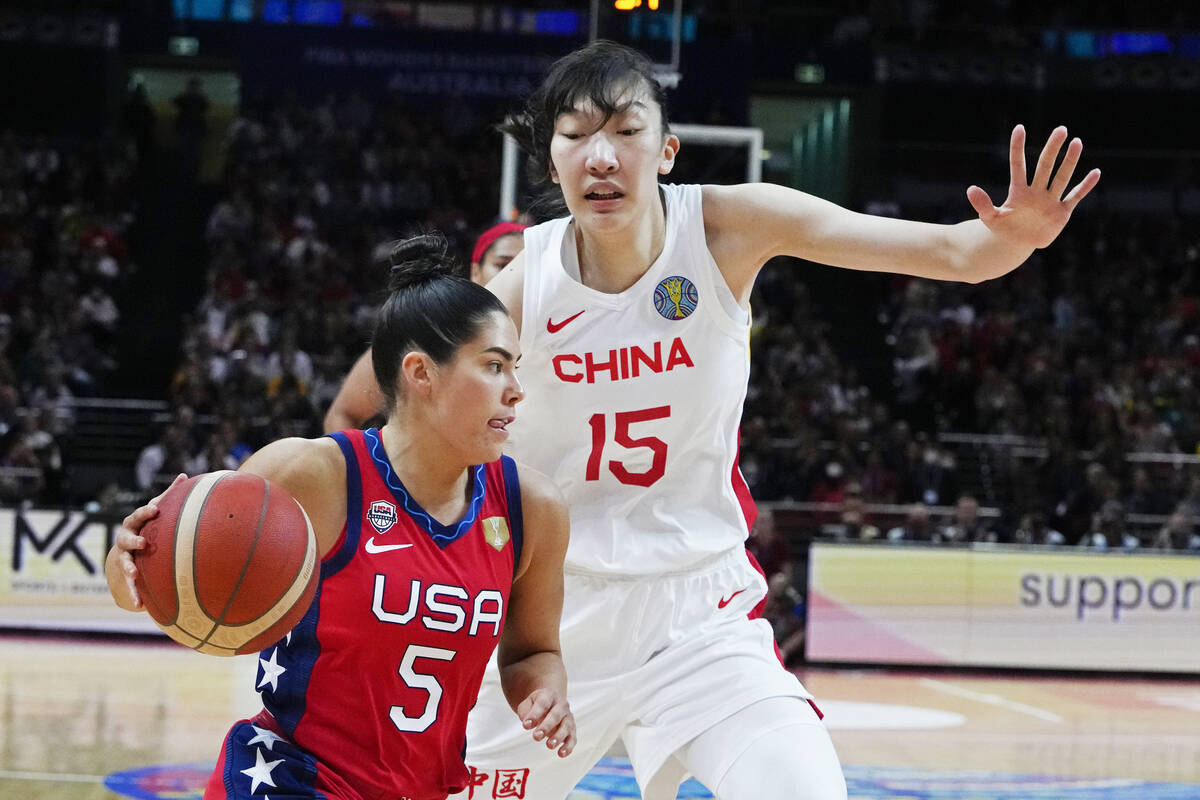 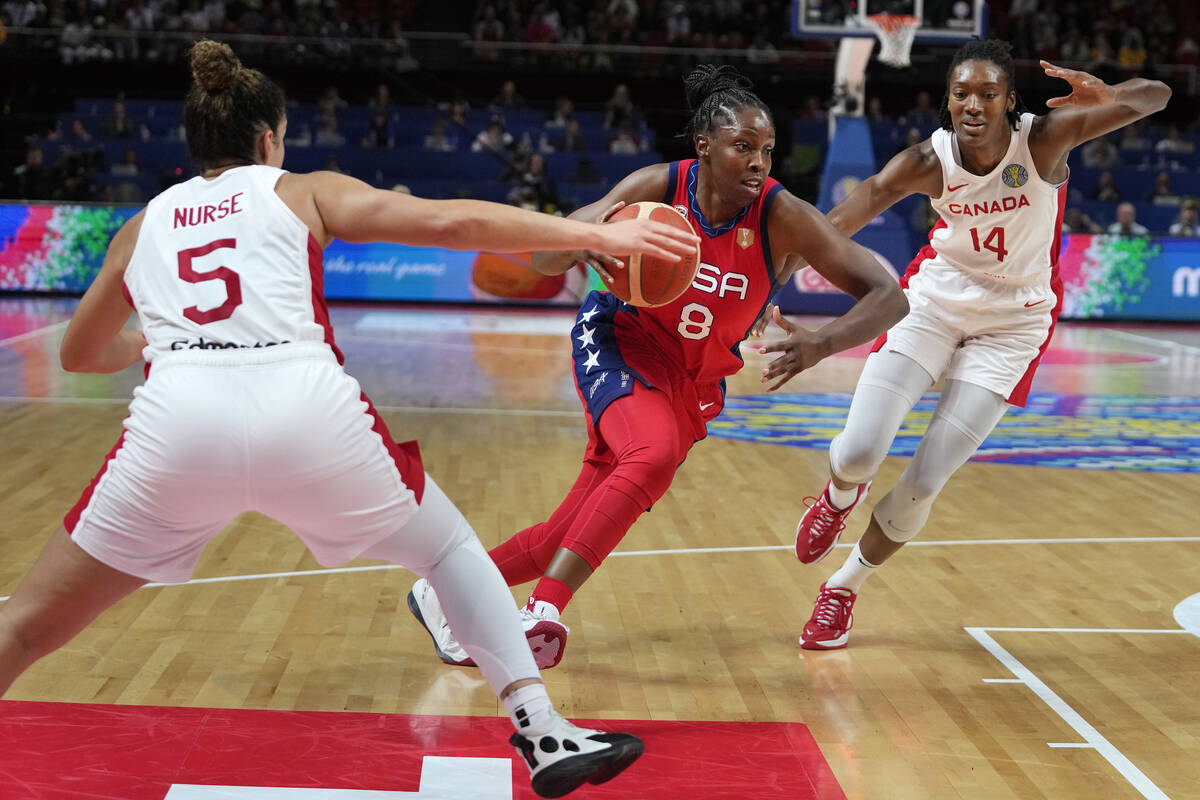 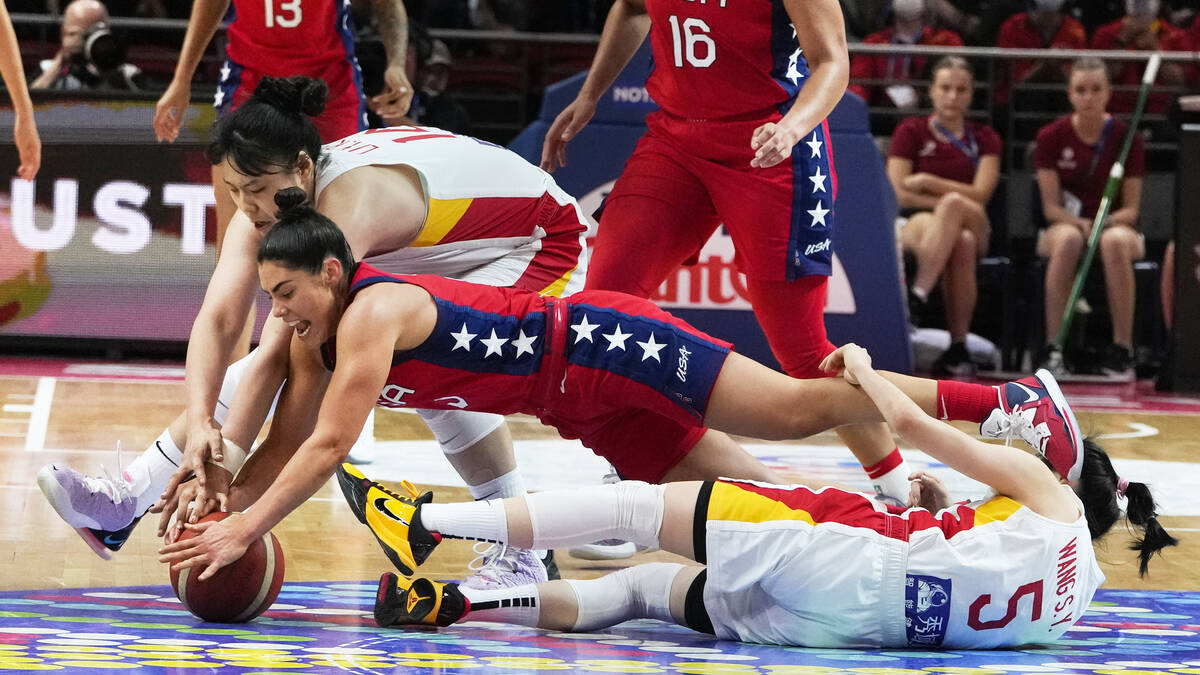 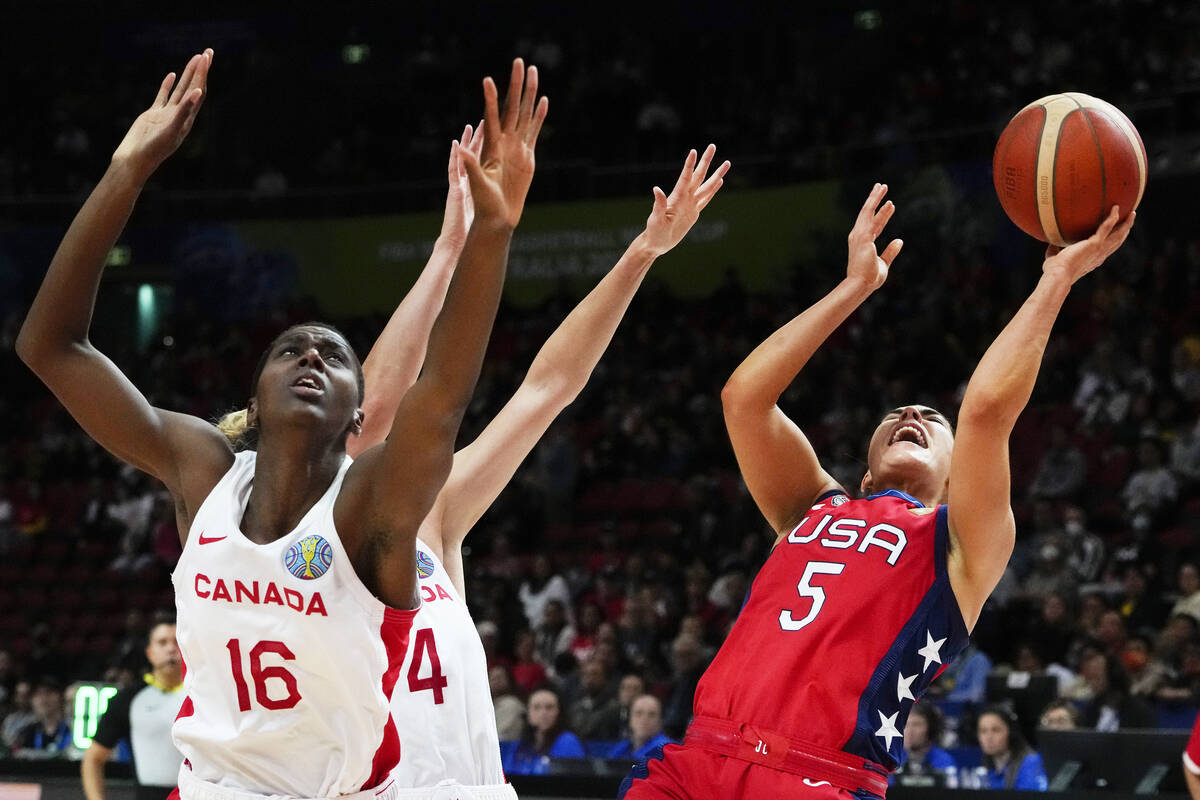 United States' Kelsey Plum reacts as she is fouled as she shoots for goal during a semifinal game at the women's Basketball World Cup against Canada in Sydney, Australia, Friday, Sept. 30, 2022. (AP Photo/Mark Baker) 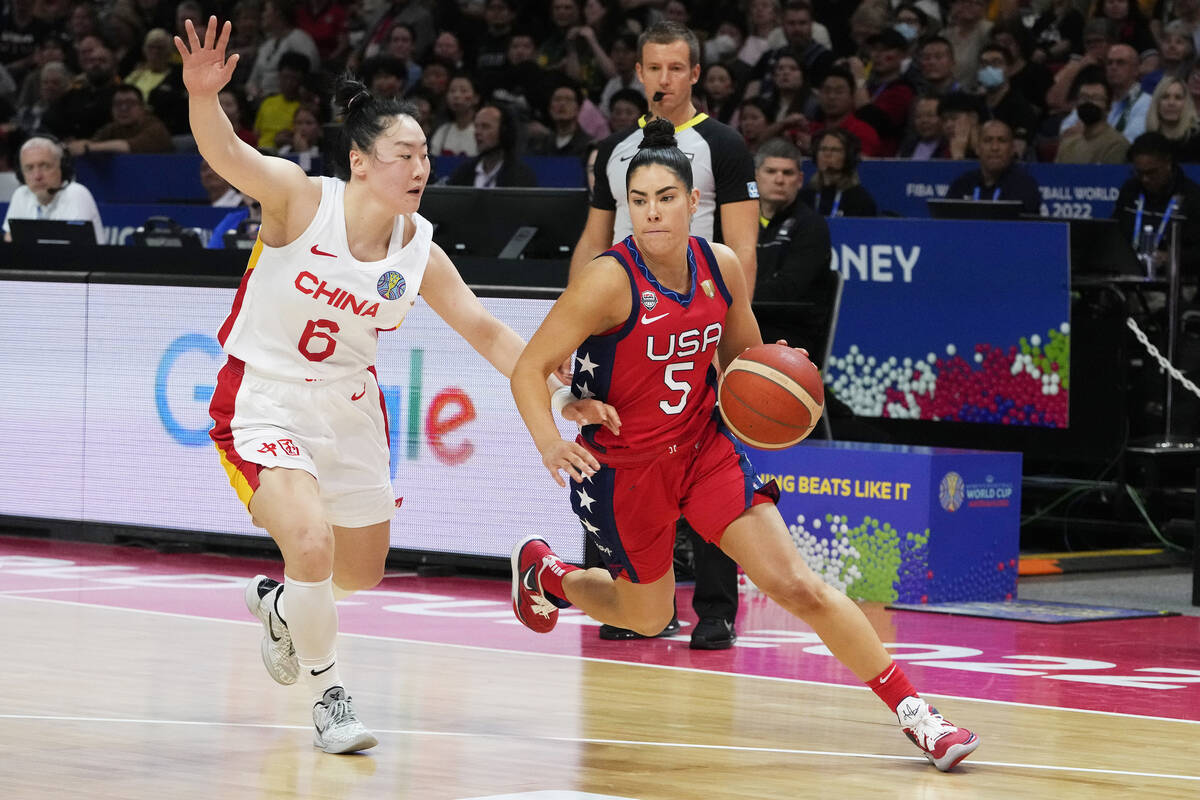 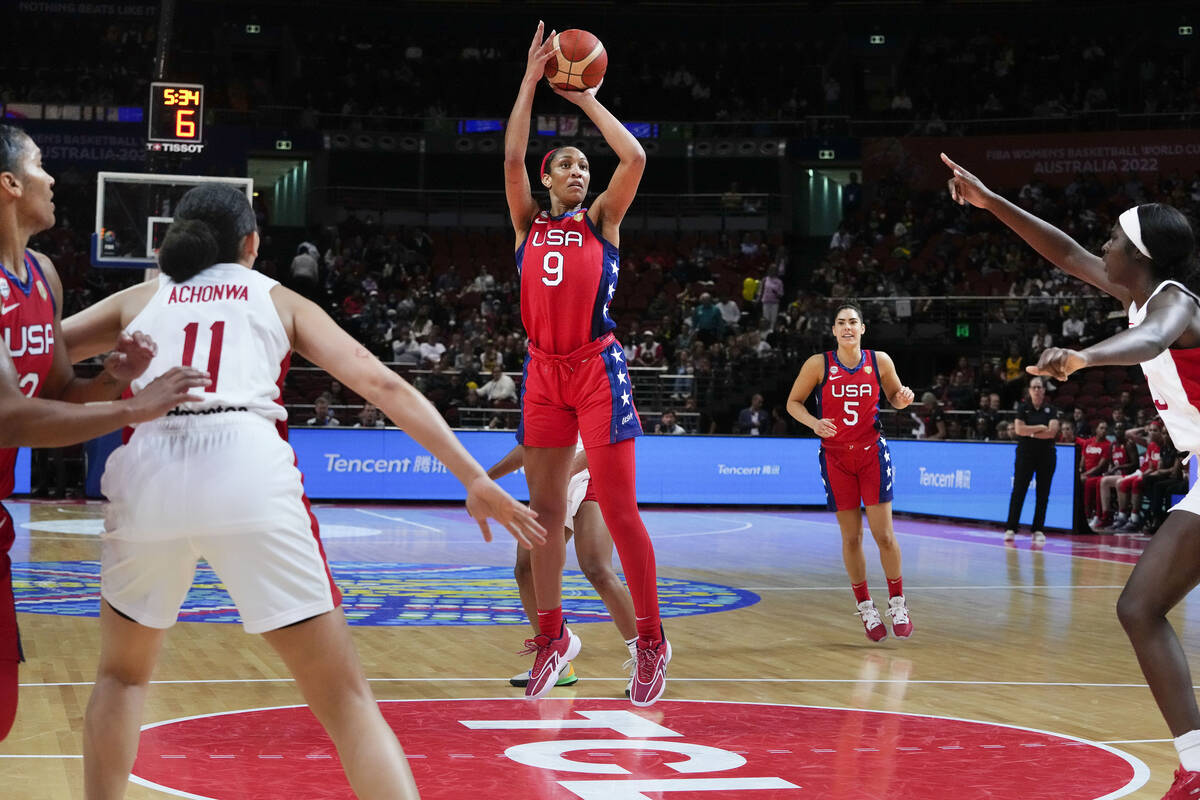 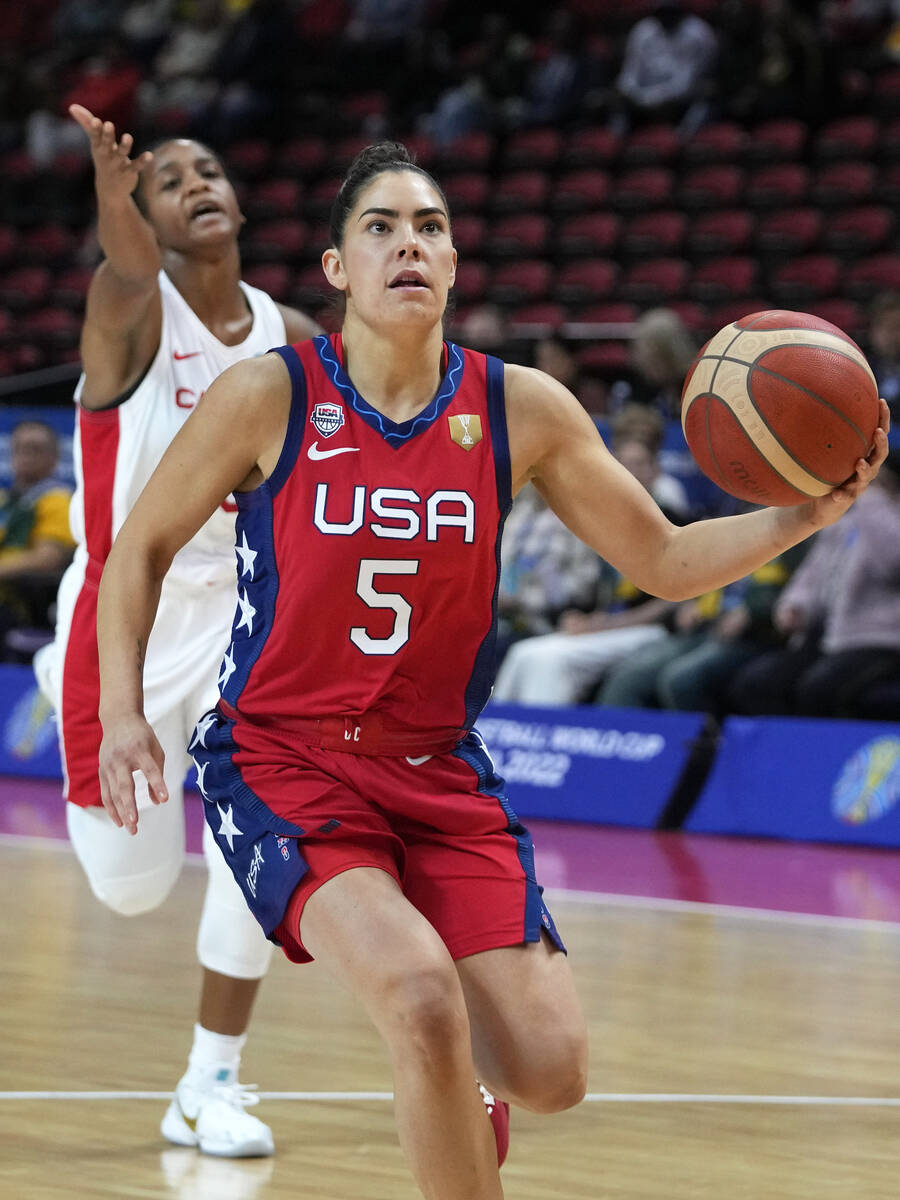 United States' Kelsey Plum, right, runs away from the Canadian defense for an easy lay up during their semifinal game at the women's Basketball World Cup in Sydney, Australia, Friday, Sept. 30, 2022. (AP Photo/Rick Rycroft) 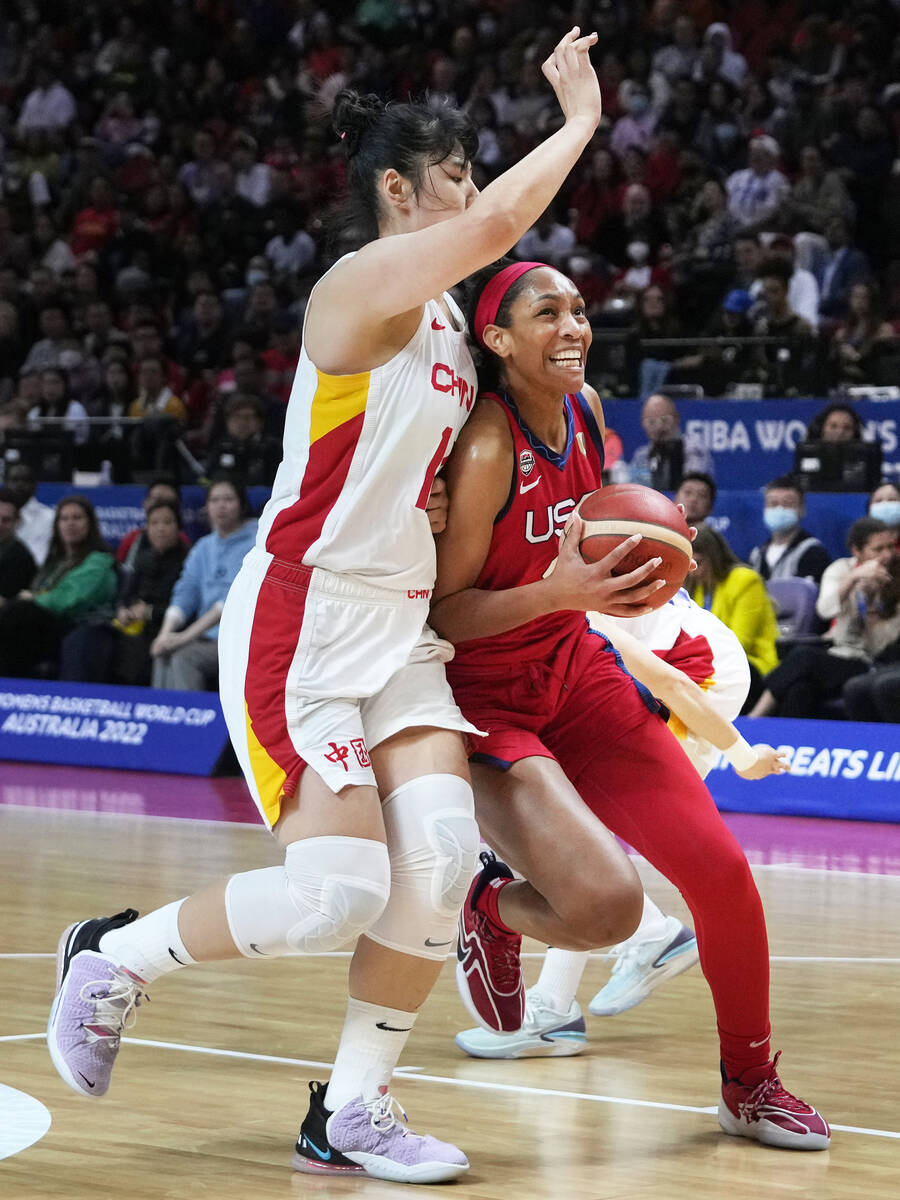 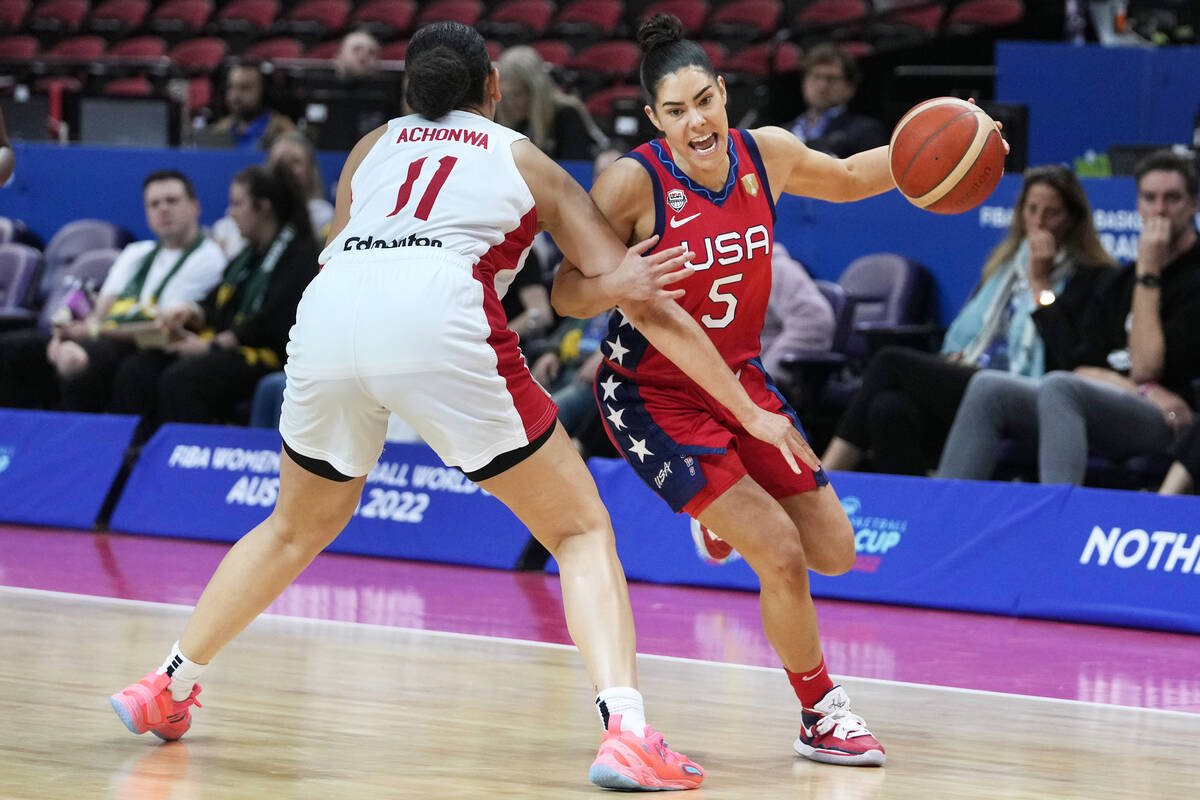 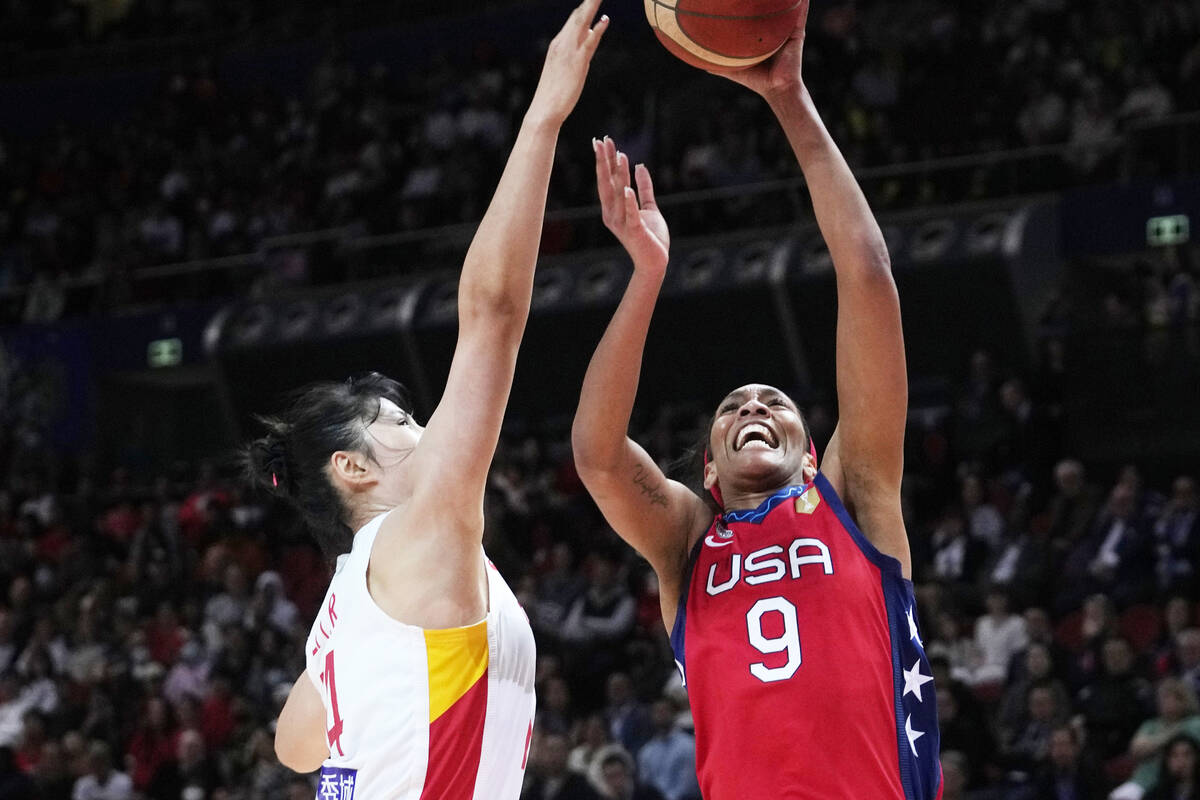 The bell has rung and students are pouring into Bishop Gorman’s cafeteria. Aces forward Theresa Plaisance was supposed to be gone long before the crowds of high schoolers arrived for lunch.

Plaisance, a 2022 WNBA champion with the Aces, had finished giving her talk about 20 minutes earlier. But after speaking to some of the Bishop Gorman student-athletes about work ethic, sacrifice and persistence, Plaisance was surrounded by a group of 10 girls who had more questions about her life, the path to the WNBA and being a professional athlete.

“It was a perfect opportunity,” Plaisance said.

This trip to Bishop Gorman is just part of a day in Plaisance’s offseason life. Now that the championship buzz and celebration hangovers are gone, the nine-year WNBA veteran is settling into her offseason regimen like the rest of the title-winning Aces.

Plaisance is one of three players spending a majority of her time in Las Vegas after the 2022 championship. Several members of the team are already playing for other club teams abroad, while others are recovering from national team duty or training across the country.

Communication between the team and its players all across the globe is just one of the unique challenges WNBA teams face. However, Plaisance assures the Aces group chat is still active.

“This is going to be a special group that’s going to keep in touch for our lifetimes,” she said.

The Aces’ forward wraps up answering questions from the high school students in the cafeteria. She’s already given this speech at least two times today to an earlier group of Gaels athletes and to students at Centennial, just an hour earlier. But Plaisance is happy to stick around and answer the final questions.

“For me,” Plaisance said, “to be out here to train, but also share my story and help display the Aces and who we are as a group, I think it’s really important.”

It took about a week and a half before the physical limitations of celebrating caught up to the Aces, depending on who’s asked.

“It was definitely tiring, but it was the kind of tiring you want to experience after something like that,” reserve point guard Sydney Colson said.

Added Plaisance: “We’re all kind of over the championship celebration. It’s kind of like, ‘Thank God we don’t have to celebrate anymore.’”

The players split up soon after the Aces’ championship parade down Las Vegas Boulevard. Some went on holiday, but several went immediately into more basketball.

Gray knew no one would have faulted the Aces for declining the invitation after a grueling playoff run and hard-fought WNBA Finals. However, she felt like it was too good of an opportunity to pass up.

“Putting on that jersey is always an honor,” she said. “When you’re one of 12 people that’s able to do that, you don’t take it lightly.”

The American trio came home with more hardware, winning the tournament. Wilson had a team-high 19 points, Plum scored 17 off the bench and Gray had eight assists during the championship game, as Team USA beat China 83-61. Wilson and Plum led the United States in scoring during the tournament, and Plum also led the team in minutes per game. The All-Star Game MVP said it was a great experience and treasured sharing the moment with her WNBA teammates.

“We just connect well, they’re great people, first and foremost,” Plum said. “Definitely built memories, and I’m looking forward to doing it again in the future with them.”

Other players also left to play abroad. All-Star wing Jackie Young, starting center Kiah Stokes and reserve guard Riquna Williams are all spending the offseason playing in Turkey, where they will be joined by Gray, who finally got some time off to rest and recover before heading overseas.

The point guard said she’s excited to see some of her Aces teammates in Turkey and said they usually try to meet up or get a meal together when they’re in the same city abroad.

The Aces rookies are also getting experience by playing overseas. Rupert is spending this season with Virtus Bologna in Italy, while rookie guard Aisha Sheppard is playing for CDB Clarinos in Tenerife, Spain, where Plaisance was during the past offseason.

Rookie wing Kierstan Bell is the lone Aces player in Australia this season. She’s playing for the Adelaide Lightning.

Plum, forward Dearica Hamby — pregnant with her second child — and Plaisance are all spending a majority of their time in the Las Vegas area. Wilson will alternate between Nevada and her home state of South Carolina while preparing for the upcoming season. Plum, who tore her labrum during the playoffs, had surgery during the offseason and has spent the past several weeks rehabbing at the UFC Performance Institute.

Wilson is in Columbia, South Carolina, hosting several basketball camps, refurbishing some local courts, donating supplies to help students with dyslexia and organizing a gala through her foundation.

Gray and Plum both have busy schedules for the offseason, but they’ve already seen the benefits of winning a championship.

Besides her rehab, Plum stayed in the United States because she had an opportunity to pursue some business ventures. She recently signed a four-year contract with sports outfitters Under Armour. Gray, meanwhile, said she’s been asked to bring the Finals MVP trophy everywhere she goes.

“We were able to be on the big stage for a long period of time, and viewers were able to see us,” Gray said. “I think that’s always important, to get into those rooms. And everyone loves to bring out and have a champion by their side.”

Colson is also staying stateside this season. She’s the chairperson of the Athletes Unlimited women’s basketball player executive committee. The organization will play its second season beginning in late February after its successful first edition was held in Las Vegas this past year.

“It’s pretty exciting this upcoming season,” she said. “I hope more people tune in and watch.”

This Athletes Unlimited season will be played in Dallas. Colson is excited to bring the event to her home state and hopes to see it grow. The veteran point guard said she’s also been encouraged by how many of the past season’s participants earned WNBA training camp invites.

In the meantime, Colson is going to resume taking acting classes, something she’s interested in pursuing after her playing career ends. She also officiated Indiana Fever wing Danielle Robinson’s wedding and plans on returning to Las Vegas for Hamby’s daughter’s birthday.

“I was (Hamby’s) teammate when she had Amaya,” Colson said. “So I definitely want to be around for it.”

The Aces players aren’t the only ones who enjoyed the 2022 championship win. The coaching staff also had a great time during the celebrations, and Plaisance named coach Becky Hammon as the individual with the most stories to tell about exactly what the team got up to after hoisting the WNBA Championship trophy. Additionally, assistant Tyler Marsh welcomed his first child, a baby boy, days after the Aces beat the Connecticut Sun in the WNBA Finals.

“It’s been a great offseason, so far,” Marsh said.

Now, they’re getting back down to business, though the staff is missing the physical presence of Hammon, who’s set to begin a new role as an NBA studio analyst for ESPN in December.

That means the rest of the staff — lead assistant Natalie Nakase, Marsh and longtime LSU assistant Charlene Thomas-Swinson — are taking active roles in monitoring their players both abroad and in the market. Nakase stressed the team staff is still in constant contact with Hammon about her expectations and goals for the Aces offseason.

It can be a delicate balancing act. Younger players like Sheppard and Bell simply need repetitions and experience, but veterans may be looking to improve a specific aspect of their game or managing their workload. What the Aces coaches want players to work on may also contradict what teams abroad need.

“We’re just trying to stay in contact with them, making sure they’re taking care of their bodies,” Thomas-Swinson said.

The Aces are also trying to take advantage of having so many players in the Las Vegas area this offseason. Nakase said it lets the coaching staff personalize workouts for each individual athlete’s specific needs. Marsh added that having so many Aces in the market helps streamline communication between the coaches, training staff and players.

So far, though, everything’s gone smoothly. The coaches try to check in with their players at least once a week, and they sense the group is just as driven as when they were playing in the Finals.

Nakase said she’d just received a message from Williams, in Turkey, saying she was excited to show the Aces just how good she can be when fully healthy next season, despite scoring 17 points off the bench in the Finals-clinching win against the Sun.