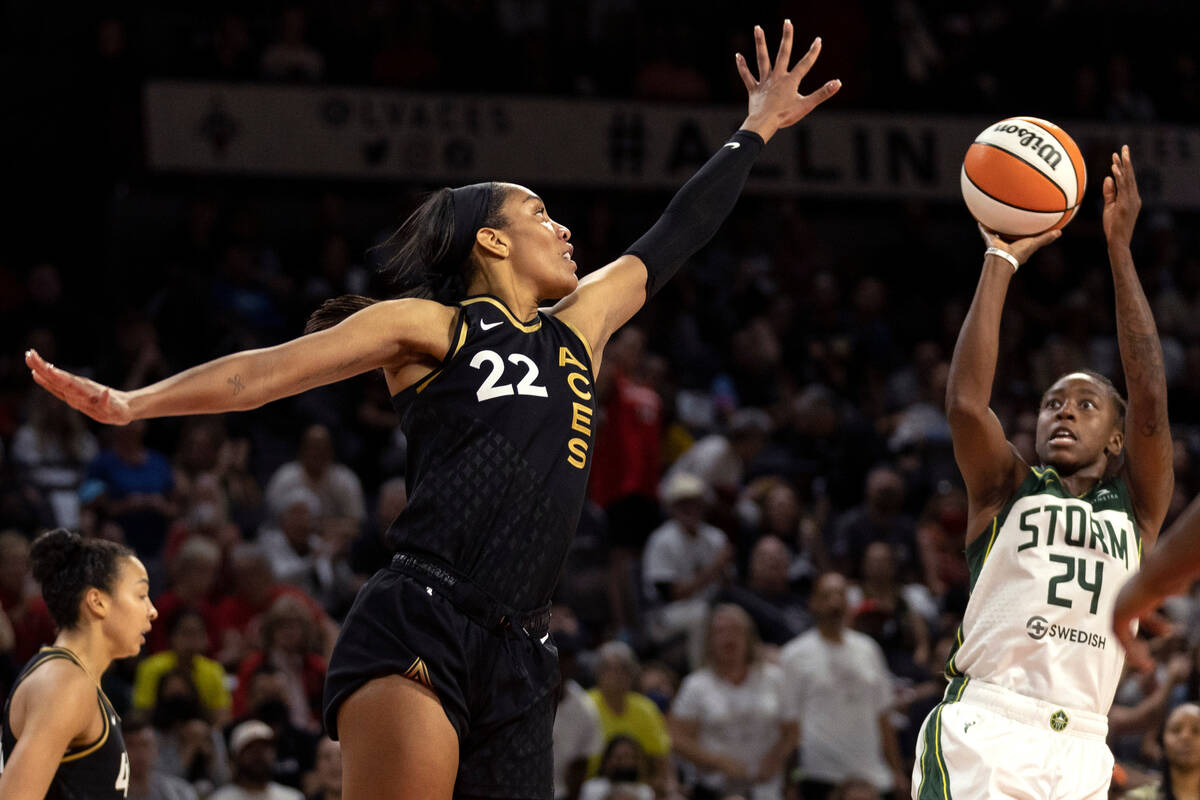 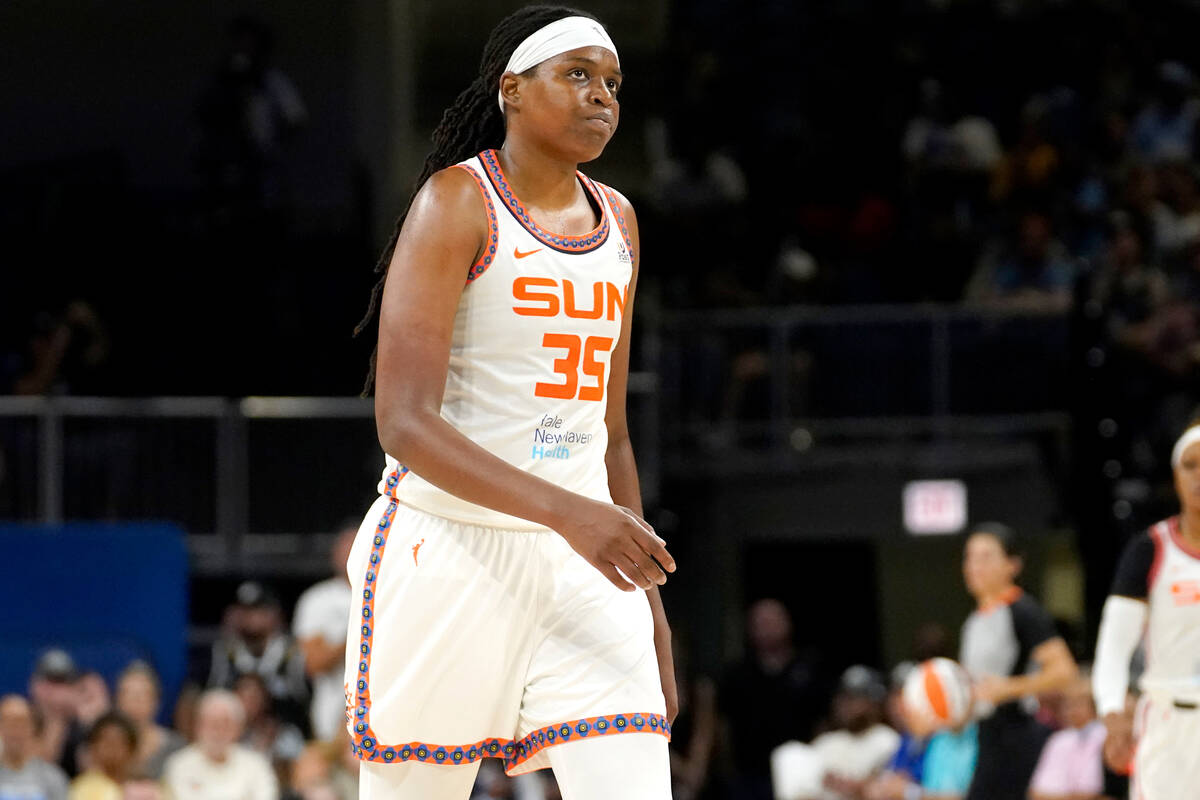 Connecticut Sun's Jonquel Jones walks down court during the second half of Game 5 in a WNBA basketball playoff semifinal against the Chicago Sky Friday, Sept. 9, 2022, in Chicago. The Sun won 72-63. (AP Photo/Charles Rex Arbogast) 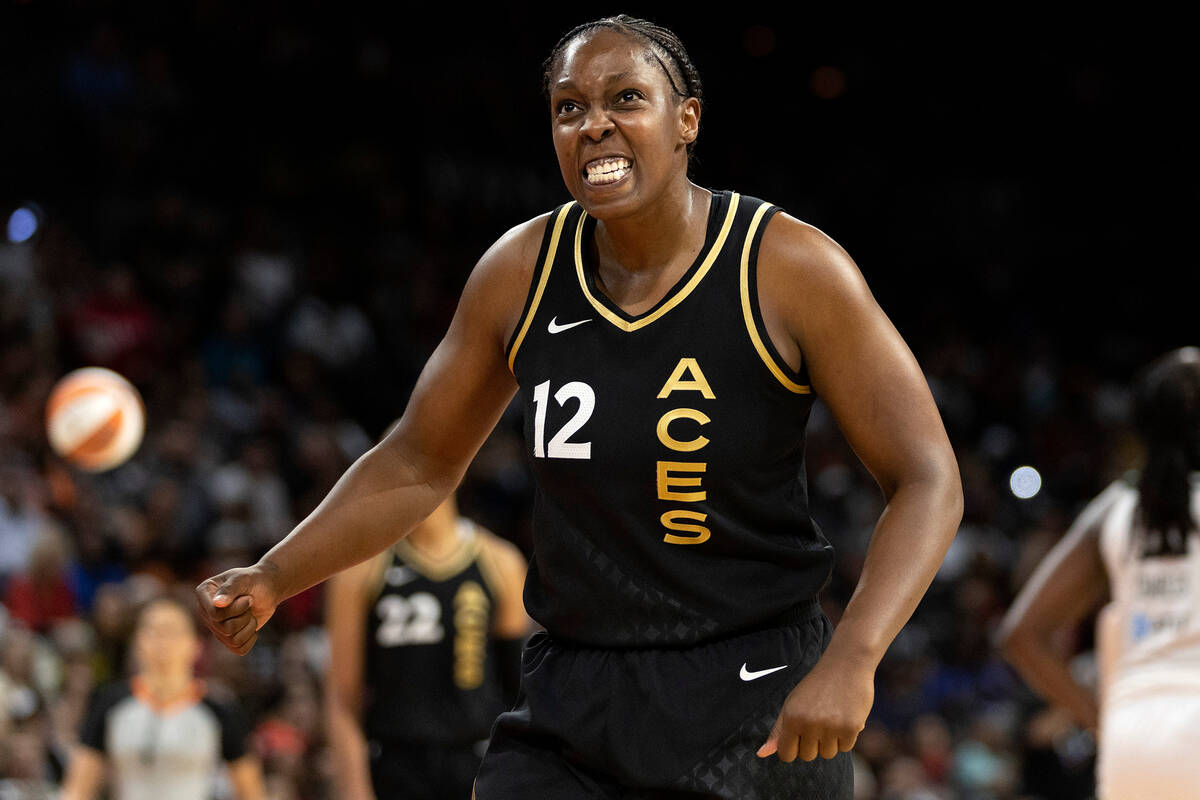 Las Vegas Aces guard Chelsea Gray (12) reacts after an offensive foul is called on the Seattle Storm during the second half in Game 2 of a WNBA basketball semifinal playoff series at Michelob ULTRA Arena on Wednesday, Aug. 31, 2022, in Las Vegas. (Ellen Schmidt/Las Vegas Review-Journal) @ellenschmidttt 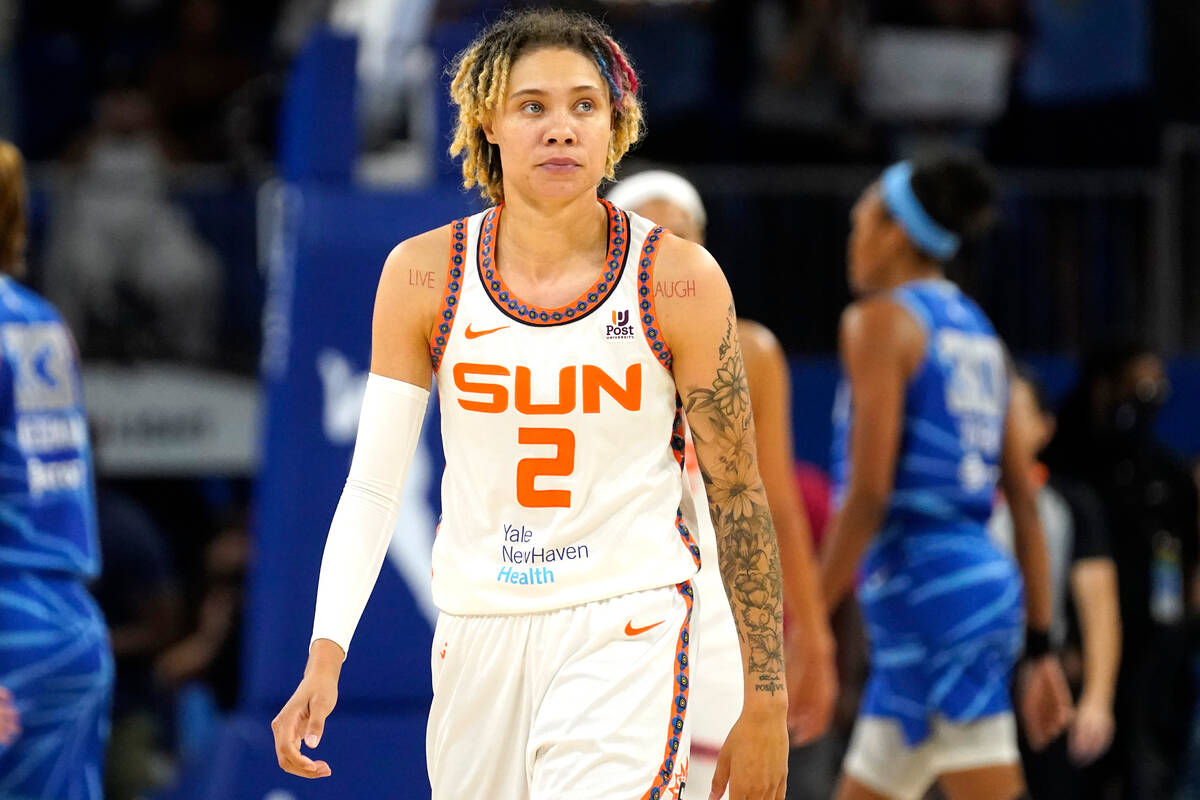 After five months, a 36-game sprint through the regular season and an exciting first two rounds of the playoffs with the WNBA’s new format, two teams remain: The top-seeded Aces and the No. 3 Connecticut Sun. Both hope to claim the first championship in franchise history.

Here’s how the teams match up:

Sun point guard Natisha Hiedeman is having a career season. Connecticut has needed everything she’s had to offer. Five games into the season, Connecticut’s starting point guard Jasmine Thomas tore her ACL, ending her season.

However, Aces point guard Chelsea Gray is possibly the standout player of these playoffs. She scored 60 points during the final two games of the semifinal series against the No. 4 Seattle Storm and is shooting a league-best 62.6 percent from the floor during the playoffs. Gray is also averaging 7.7 assists per game.

Hiedeman is a starting-caliber player, but Gray is playing at an otherworldly level.

The Sun’s Courtney Williams continues to be one of the most dynamic guards in the WNBA. She averaged 11.1 points per game and 3.3 assists for the Sun this season. She also scored 19 in Game 4 of Connecticut’s semifinal series with the No. 2 Chicago Sky to force Game 5.

Williams isn’t Kelsey Plum though. The former Washington guard, who averaged 20.2 points during the regular season, never found her rhythm from 3 during the semifinals. Instead, she turned her threat from deep into points around the rim and was a willing decoy. Plum is still averaging 18.8 points per game in the playoffs.

Williams is a very good player, but Plum finished third in MVP voting.

The 6-foot-4 DeWanna Bonner averaged 13.5 points per game this season while shooting 43.9 percent on field goal attempts. She also had 15 points and nine rebounds to help the Sun beat the Sky in Game 5 of the semifinals and continues to be one of the league’s best players in her 13th season.

After averaging a career high 15.9 points per game and winning the WNBA’s 2022 Most Improved Player award, Aces wing Jackie Young’s offense has taken a backseat to her defense in the playoffs. But she’s also hit some big shots for the Aces. Young is second in the WNBA in playoff 3-point percentage, shooting 68.8 percent, and made the buzzer-beating layup to force overtime during the Aces’ pivotal Game 3 win against Seattle.

Young and Bonner are comparable wings. It’s a tie, but this will be one of the most interesting battles of the series.

Coming off an Achilles injury which cost her the most of the 2021 season, Sun forward Alyssa Thomas was back to her best in 2022. She finished second in defensive player of the year voting and took on more playmaking responsibilities. Her 6.1 assists per game in the regular season are a career-best mark.

Thomas lost the defensive player of the year award to her Aces counterpart, forward A’ja Wilson, who collected it to go along with her 2022 WNBA MVP honors. The Aces’ All-Star forward has been even better during the playoffs, scoring 33 in Game 2 against the Storm and 34 points in Game 3. Wilson rested just four minutes during the semifinals.

Wilson is the MVP for a reason.

Jonquel Jones was the 2021 MVP and had another strong season. She’s averaging 14.4 points in the playoffs to lead the Sun and had 15 points and 10 rebounds in the closeout game against Chicago.

Aces coach Becky Hammon has continued to trust veteran Kiah Stokes at center. The Aces have only lost one game since she was added to the starting lineup. She brings defensive presence and rebounding.

Stokes is a solid role player. She’s just not Jones, a four-time All-Star and former MVP. The Sun are the stronger team at center.

During its Game 5 win against Chicago, Connecticut played an eight-player rotation. Odyssey Sims and DiJonai Carrington both add some grit and defense, but center Brionna Jones has the biggest role. The 2022 WNBA Sixth Player of the Year, Jones averaged 13.8 points and 5.1 rebounds for the Sun.

Hammon shortened her bench rotation again in the semifinals, exclusively running her starting five plus reserve guard Riquna Williams. The 10-year veteran has been invaluable to the Aces’ small-ball lineup. All-Star Dearica Hamby has returned from a right knee bone contusion, but played sparingly during the semifinals.

Williams has been more than solid for the Aces, but even without Jones, the Sun have more reliable depth.

In the first meeting between the Sun and Aces this season, there was a noticeable absence. Curt Miller, the Connecticut coach, missed the game due to COVID-19 health and safety protocols. The Aces won 89-81. The teams played again two days later, and the Sun won 97-90 with Miller on the sideline.

Aces coach Becky Hammon has grown a lot since those two games early in the season. She was at her best against the Storm, calling the right plays, making the correct personnel decisions and proving why she was the 2022 WNBA Coach of the Year.

Miller has more experience, but Hammon proved she is very much in her depth during the postseason.