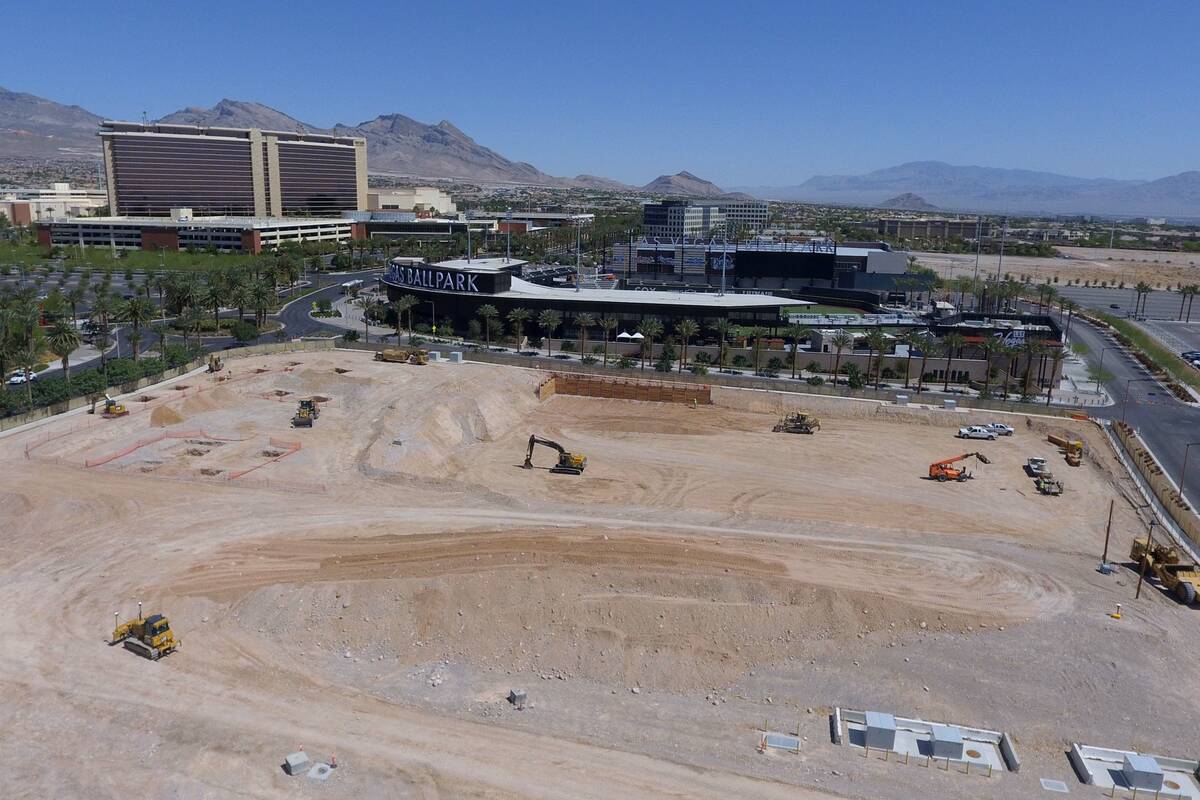 Construction work is now underway on a new office building next to Las Vegas Ballpark and on the second phase of an upscale apartment complex, on Thursday, June 10, 2021, in Las Vegas. Summerlin developer Howard Hughes Corp. says it is willing to provide land in Summerlin if the A’s choose to build a planned $1 billion facility there. (Bizuayehu Tesfaye/Las Vegas Review-Journal) @bizutesfaye 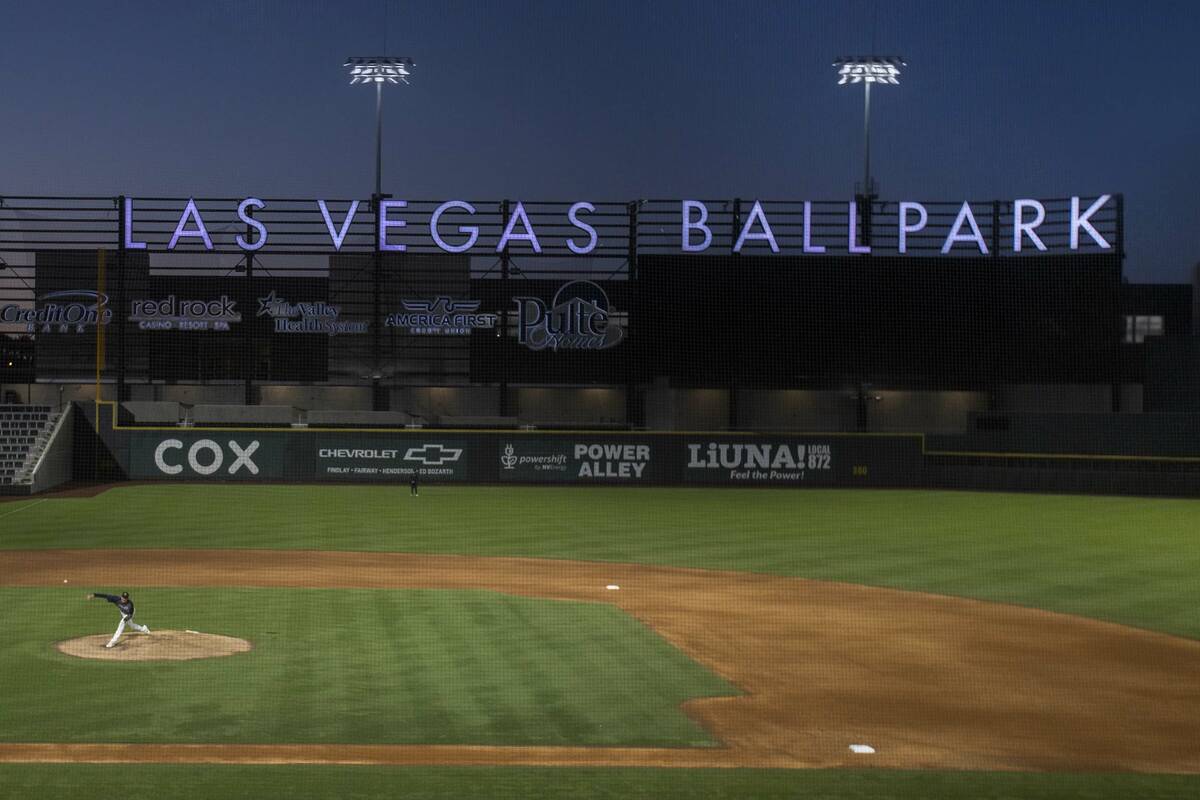 If the Oakland Athletics choose to relocate to the Las Vegas Valley, one familiar partner is ready to make an offer that could be hard to resist: free land.

The Howard Hughes Corp. — which owns the A’s Triple-A affiliate, the Las Vegas Aviators, and their home, Las Vegas Ballpark — says it is willing to provide the Major League Baseball team land in Summerlin if the A’s choose to build a planned $1 billion facility there.

“I know they’re getting a hard sell from different people on the Strip that own the land that they want the A’s to buy,” Peter Riley, senior vice president and general counsel for Hughes Corp., told the Review-Journal. “We can donate land. That would give us a big leg up, should they make the decision (to relocate).”

On Friday, A’s President Dave Kaval told the Review-Journal the team had its list of potential ballpark sites down to a final two or three and had made an offer on one of the properties. He didn’t identify that location.

The A’s met with Hughes Corp. officials this month about a plot of land the real estate development and management company owns just west of the 215 Beltway and Summerlin Parkway. Riley said the team has visited multiple sites owned by the corporation.

Riley described their meetings as informal and characterized them as company officials listening and trying to gauge what the A’s are looking for in a ballpark site.

No land deal yet

Riley emphasized that a land deal with the A’s is not underway. But he said if the A’s officially announce they intend to relocate to the area, the process could ramp up quickly.

“It’s like dominoes. Once the decision is made that they’re definitely going to come to Las Vegas, I think then you’ll see the dominoes start to fall,” Riley said. “Once they make the decision, and if they’re really interested in Summerlin, then we would sit down with them and see if there is a deal that could be had.”

Kaval has hinted that team officials are interested in what the Summerlin area has to offer, mentioning the community after almost all of their seven trips to Southern Nevada, which began in late May. Team officials are known to have also looked at properties in other parts of Las Vegas, Henderson and near the resort corridor.

“That’s one of the considerations when we talk to different (owners) of the final sites is land cost, partnering on ancillary development, understanding all the aspects of the different locations logistically, making sure that they work,” Kaval said. “So those negotiations are going on with a couple (of) different groups to see what’s possible.”

MLB gave the A’s permission to explore possible relocation to Las Vegas as the league deemed their current home in Oakland, RingCentral Coliseum, as inadequate for the team’s future. The team is also in the process of negotiating a separate ballpark deal in Oakland that would see a $12 billion project centered on a $1 billion, 35,000-seat waterfront ballpark at the Port of Oakland’s Howard Terminal.

A’s officials are waiting for the results from multiple surveys and a market feasibility study. Those will give the A’s a better idea of where a ballpark would work in the valley.

The results of the market feasibility study are expected back the week after Thanksgiving, Kaval said.

Riley said Summerlin would be a great fit for a team and stadium because the A’s wouldn’t have to rely on tourists to fill seats during an 81-game home season.

“I’ve told the A’s this, they’re much better served to be in a residential area, because they’ve gotta get (fans to) 81 games,” Riley said. “You’re not going to get that from tourists on the Strip.”

Riley noted the ease of access to the land near the Beltway and Summerlin Parkway.

“You could bet fans (on) from North Las Vegas, fans from Henderson and other areas that probably won’t want to go to the Strip,” Riley said. “Coming from the 215 allows easy access, as does the Summerlin Parkway. … Quite frankly, people on the Strip are probably not going to be your hometown fan base.”

With the A’s lease at their current ballpark expiring in 2024, they’ll likely need a temporary place to play before a new stadium is constructed. Riley said Las Vegas Ballpark could factor into that equation.

“The reality is they may have to play in our ballpark (Las Vegas Ballpark) for a couple years, temporarily, no matter what happens,” Riley said. “So we’ve just talked around the edges of that possibility as well. What that would mean for us, the Aviators and our operation? That’s really been the majority of our talks.

The $150 million, 10,000-seat stadium opened in 2019. The facility features 22 suites, party decks, a center field pool and a grass berm next to that, among its amenities.

Skye Bolt, a player in the A’s organization that spent time both in Oakland and Las Vegas during the 2021 season, said in July he thinks players would be OK with playing at the ballpark on a temporary basis. He noted the park has routinely drawn capacity crowds, and he believes that support would extend to the A’s if they played there.

“The Summerlin community is more than capable of supporting us,” Bolt said. “I think temporarily, and I say temporarily, I think that place would be fantastic. … While in transition, I think that is something that should sustain (us) until we get moving into a more permanent location.”