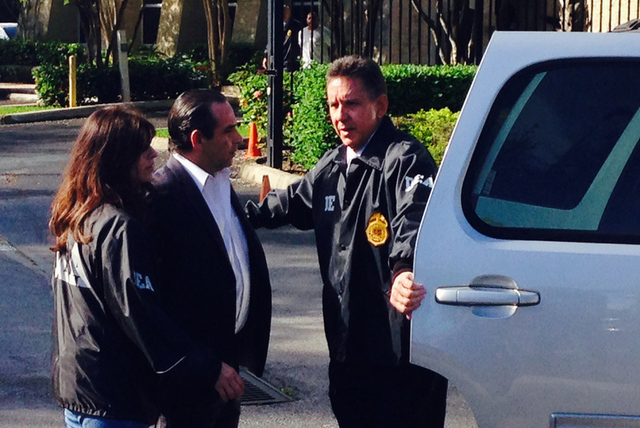 In this photo provided by ESPN, Anthony Bosch, center, is escorted by Drug Enforcement Administration officials in Weston, Fla., Tuesday, Aug. 5, 2014. The owner of a now-defunct Florida clinic was charged Tuesday with conspiracy to distribute steroids, more than a year after he was accused of providing performance-enhancing drugs to New York Yankees star Alex Rodriguez and other players. Federal court records show Bosch is charged with one count of conspiracy to distribute testosterone. (AP Photo/ESPN Outside the Lines, Andrew Lockett) MANDATORY CREDIT 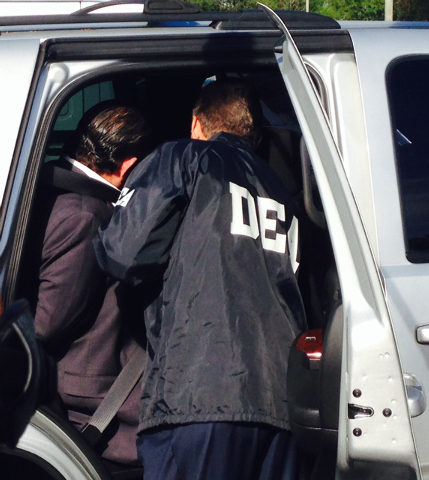 In this photo provided by ESPN, Anthony Bosch is shown in a car, next to a Drug Enforcement Administration official in Weston, Fla., Tuesday, Aug. 5, 2014. The owner of a now-defunct Florida clinic was charged Tuesday with conspiracy to distribute steroids, more than a year after he was accused of providing performance-enhancing drugs to New York Yankees star Alex Rodriguez and other players. Federal court records show Bosch is charged with one count of conspiracy to distribute testosterone. (AP Photo/ESPN Outside the Lines, Andrew Lockett) 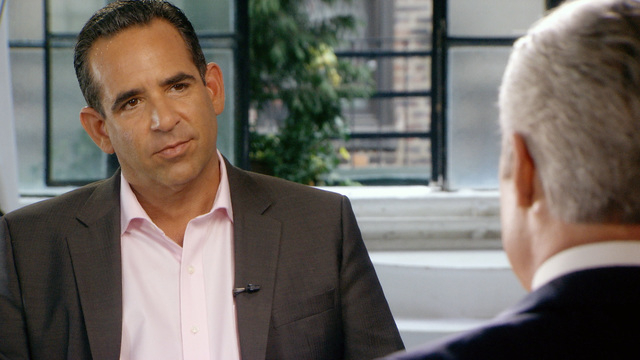 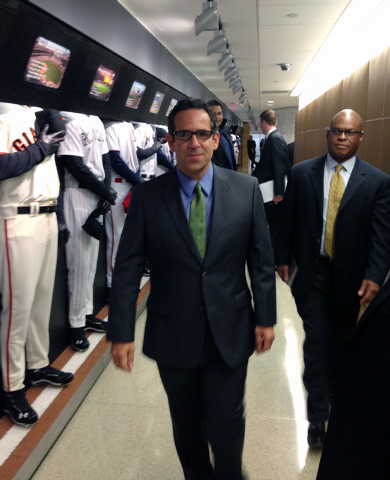 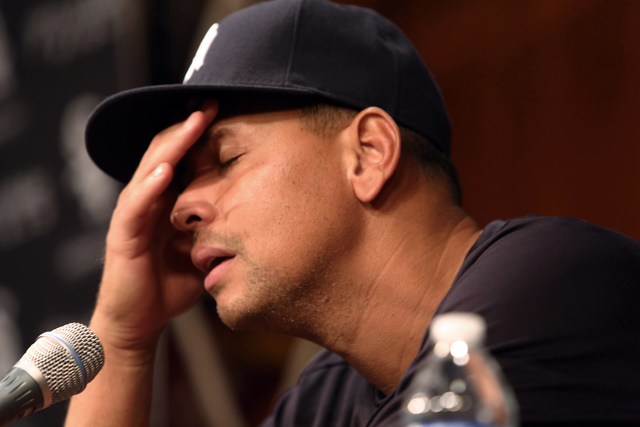 FILE - In this Aug. 5, 2013 file photo, New York Yankees' Alex Rodriguez, with his hand to his head, talks during a news conference before the Yankees played the Chicago White Sox in a baseball game at US Cellular Field in Chicago. The owner of a now-defunct Florida clinic was charged Tuesday, Aug. 5, 2014, with conspiracy to distribute steroids, more than a year after he was accused of providing performance-enhancing drugs to Yankees star Alex Rodriguez and other players. Federal court records show Anthony Bosch is charged with one count of conspiracy to distribute testosterone. (AP Photo/Charles Cherney, File) 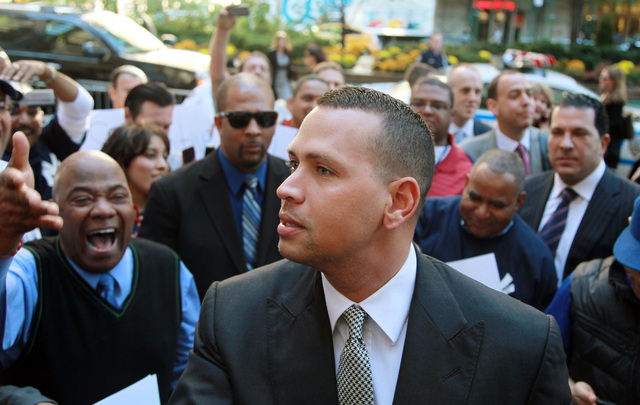 FILE - In this Oct. 1, 2013, file photo, New York Yankees' Alex Rodriguez arrives at the offices of Major League Baseball in New York. The owner of a now-defunct Florida clinic was charged Tuesday, Aug. 5, 2014, with conspiracy to distribute steroids, more than a year after he was accused of providing performance-enhancing drugs to New York Yankees star Alex Rodriguez and other players. Federal court records show Anthony Bosch is charged with one count of conspiracy to distribute testosterone. (AP Photo/David Karp, File)

MIAMI — The former clinic owner accused of selling performance-enhancing drugs to Alex Rodriguez has agreed to plead guilty in what prosecutors called a wide-ranging conspiracy to distribute steroids to both major league ballplayers and high school athletes.

The charges filed Tuesday against former Biogenesis of America owner Anthony Bosch and six others marked one of the biggest salvos yet in a case that has dragged on for nearly two years. The case has sparked lawsuits, mudslinging and suspensions against numerous major leaguers, including Rodriguez.

Also charged was Yuri Sucart, 52, a cousin of Rodriguez who the New York Yankees third baseman has said provided him with steroids from 2000 to 2003 when he played for the Texas Rangers.

Sucart and the others are accused of acting as recruiters, setting up meetings between the athletes and Bosch, who introduced himself as “Dr. T,” authorities said. Professional athletes paid up to $12,000 a month for the drugs provided by Biogenesis, while high schoolers paid up to $600 a month. All the clients were promised that the substances would not be found through drug testing, prosecutors said.

“He is not a doctor,” Mark R. Trouville, chief of the Miami Drug Enforcement Administration office, said of Bosch. “He is a drug dealer.”

U.S. Attorney Wifredo A. Ferrer said Bosch did not have a medical license, making what happened all the more dangerous.

“As with many drug cases, these defendants were motivated by one thing — by money,” Ferrer said.

Major League Baseball was not part of the criminal investigation and declined comment. No athletes were charged nor named in court documents, and it is unclear how many may have been involved. However, authorities said Bosch admitted to providing performance-enhancing drugs to 18 high schoolers.

“In terms of an agreement to cooperate and plead guilty, Bosch has agreed to do that,” Ferrer said.

Michael McCann, director of the sports and entertainment law center at the University of New Hampshire School of Law, said it’s unlikely that the players involved in this scandal will face criminal charges, unless there’s any evidence that a player went beyond using drugs and into distributing them.

“They could lose an endorsement contract because of a morals clause in their contract, but if that were to happen I think it would have already happened,” McCann said. “In terms of punishment from baseball, baseball has punished them.”

The prosecution may have taken so long because investigators might have wanted to confirm the information they were getting from Bosch, even if he was cooperating, McCann said.

“He’s not somebody with a great track record, there are reasons to doubt him in terms of his credibility,” he said.

Joe Tacopina, a lawyer for Rodriguez, said the arrests Tuesday represent a degree of closure for Rodriguez and will enable him to focus on an eventual return to baseball.

“It sort of reinforces the notion that Alex committed no crime, number one,” Tacopina said. “And number two, quite frankly, this really signified the beginning of the end of the whole Biogenesis saga and allows Alex to focus on the future going forward.”

Rodriguez is currently serving a season-long suspension, the longest penalty in the sport’s history related to performance-enhancing drugs. He was the only one 14 players involved in the scandal to contest his penalty.

However, since the investigation is ongoing, it remains possible that more players could eventually face sanctions as a result of the Biogenesis probe.

Prosecutors also announced the arrest of three others in a drug ring discovered during the course of the investigation into Biogenesis. However, that case, which centered around the stimulant known as “molly,” was not directly connected to Bosch.

A Miami New Times report from January 2013, which sparked MLB’s investigation, said Rodriguez had bought human growth hormone and other substances from 2009 to 2012 from Bosch’s clinic. The newspaper said it had obtained records detailing the purchases by Rodriguez and other ballplayers.

MLB had sued Bosch and his clinic but withdrew the lawsuit in February. The lawsuit had accused them of conspiring with players to violate their contracts by providing them with banned substances.

Associated Press reporters Eric Tucker in Washington and Laura Wides-Munoz in Miami contributed to this report.