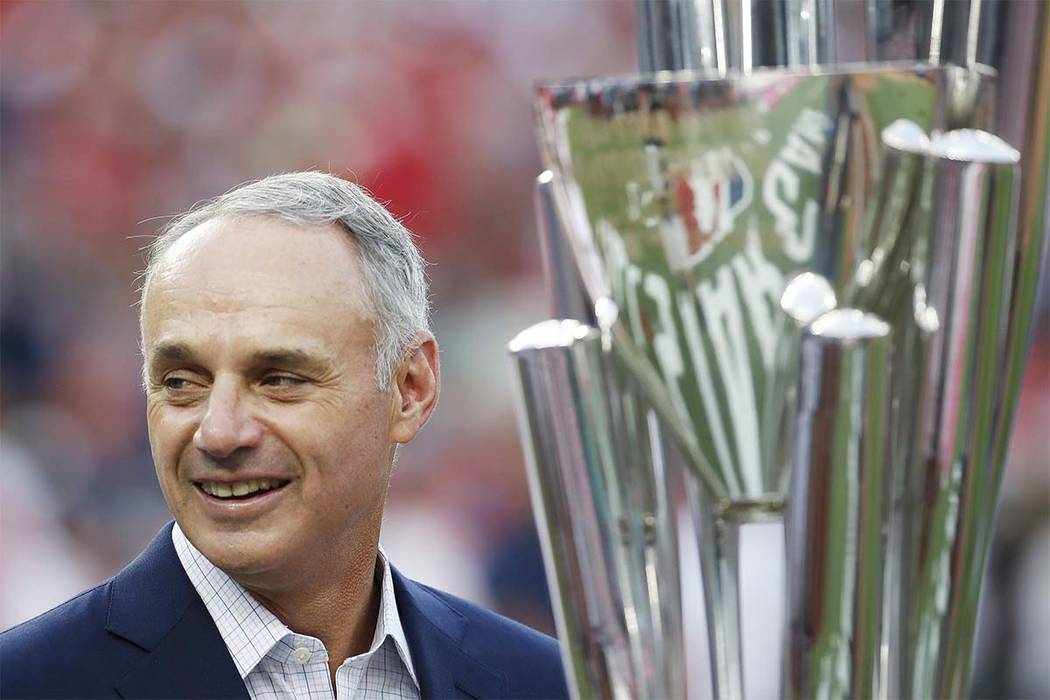 Las Vegas has been mentioned in the past few years as a possibility for Major League Baseball expansion. And MLB commissioner Rob Manfred had some of his strongest words Tuesday about the city’s hopes for a franchise.

Las Vegas has been on MLB’s radar since the NHL expanded into the market in 2016 with the Golden Knights, who advanced to the Stanley Cup Final last season, and the NFL’s Raiders announced their move from Oakland to Las Vegas beginning in 2020.

However, Manfred said before MLB expands from its current 30 franchises, stadium issues need to be settled in Oakland and Tampa Bay.

The Athletics have had a number of stadium proposals fail while trying to leave outdated Oakland Coliseum. The Rays have played almost two decades in a stadium that is inadequate for baseball and prohibits their ability to draw fans.

”Oakland and Tampa (stadium issues) have to get done before anything else happens,” Manfred said. “I would like to get to 32 (teams).”

Manfred said getting to 32 teams would help MLB move to either four divisions of eight teams or eight divisions of four teams. Baseball currently has six divisions of five teams, 15 in each league.

”It gives us schedule flexibility because fours work better than fives in the schedule,” he said. “It creates the possibility of some realignment that could help in terms of travel.

Manfred reiterated that Las Vegas is on MLB’s expansion list. But the Southern Nevada market is not alone.

“It is an embarrassment of riches,” Manfred said of expansion options. “When you talk about cities, if you leave one off or mention one, that gets that city one direction or the other.

“In the U.S., you could get Vegas, Portland (Oregon), Nashville, Charlotte, all viable alternatives for us. Montreal certainly. Maybe someplace else in Canada. I think Mexico, depending on how far down the road we are, could be another possibility for us.”

Manfred also said MLB is looking at ways to be prepared for the betting impact on the league. The U.S. Supreme Court recently ruled to allow states to decide if they wanted to allow sports betting.

“It’s a challenge and an opportunity,” he said. “On the challenge side, there’s been a lot written about us lobbying, but the fact of the matter is we talked to sports (leagues) in Europe when we realized this was coming. They said the single biggest mistake you can make is not being active in trying to determine what the legal framework’s going to look like from an integrity perspective. …

“On the other hand, it’s an opportunity. We know … there is research (that) fan engagement can be improved through gaming. People are more interested in the sport. They consume more of the sport. You want to take advantage of that opportunity without letting gaming become too intrusive.”

Yet sports betting won’t change MLB’s rule that players and coaches are not allowed to gamble on the game.

“There will always be a rule that players, coaches, front-office personnel (that keeps them) from betting on the sport,” he said.

Bill Bradley is sports editor of the Review-Journal. He can be reached at bbradley@reviewjournal.com and 702-387-2909. Follow on Twitter @billbradleyLV.