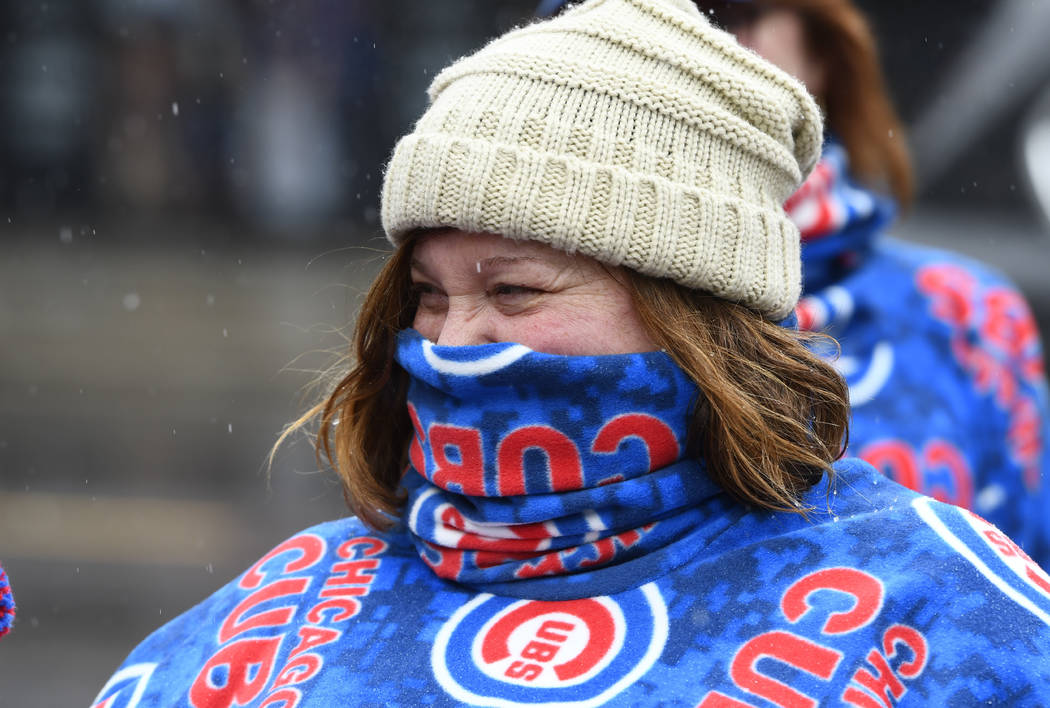 Barb Brauer keeps herself warm outside Wrigley Field after a baseball game between the Atlanta Braves and the Chicago Cubs was postponed on Sunday, April 15, 2018, in Chicago. The game is rescheduled for Monday, May 14, 2018. (AP Photo/Matt Marton)

Ice forms on the railing above the fountains before a baseball game between the Kansas City Royals and Los Angeles Angels on Sunday, April 15, 2018, at Kauffman Stadium in Kansas City, Mo. (John Sleezer/The Kansas City Star via AP) 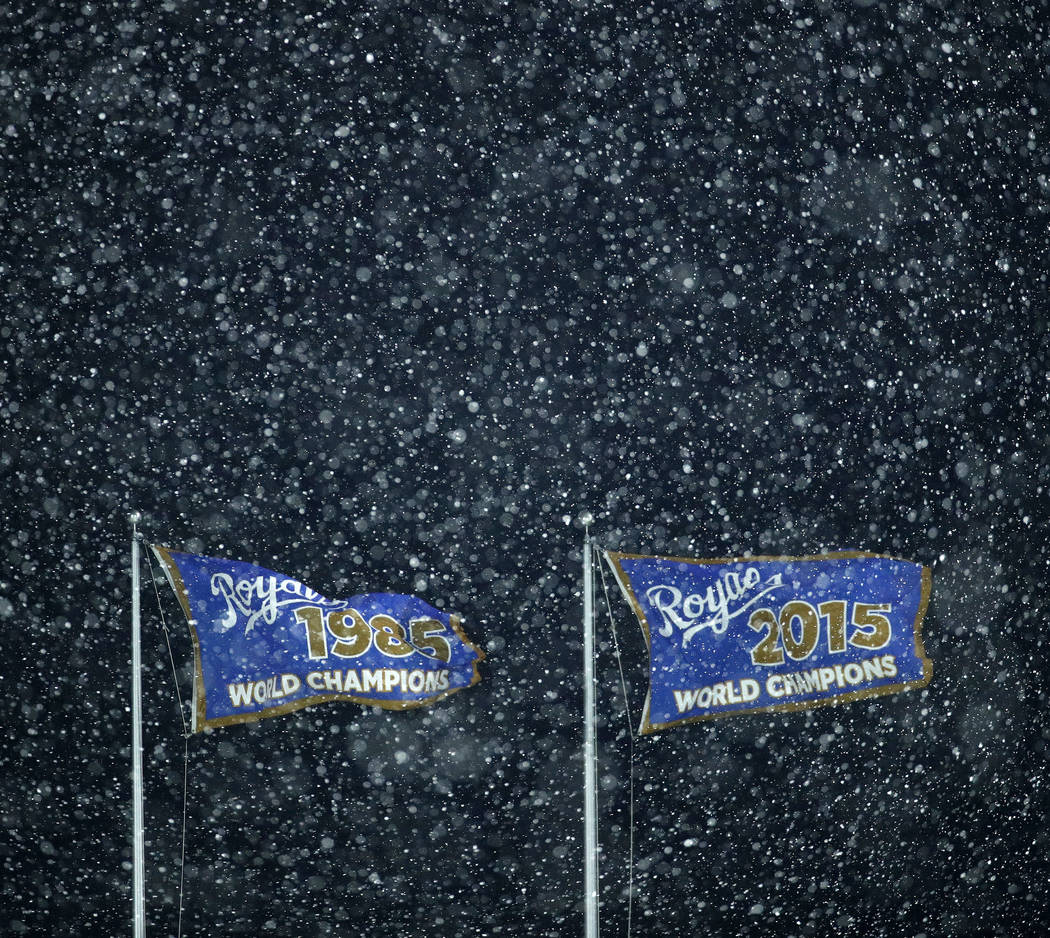 Flags fly as snow falls during the eighth inning of a baseball game between the Kansas City Royals and the Los Angeles Angels, Saturday, April 14, 2018, in Kansas City, Mo. (AP Photo/Charlie Riedel) 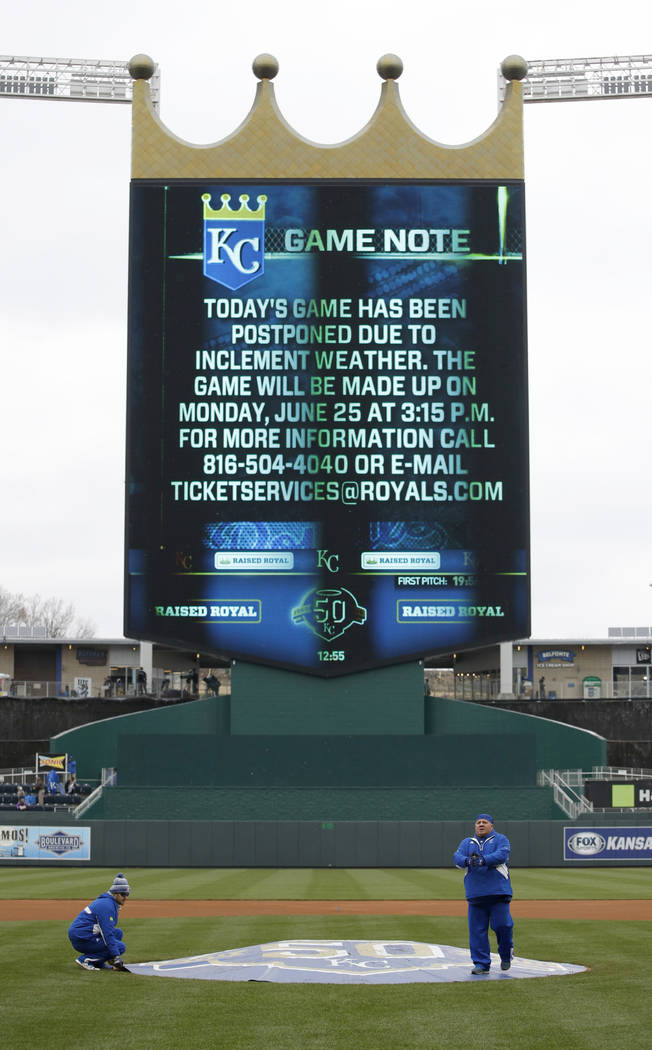 Grounds crew workers cover the pitcher's mound after a baseball game between the Kansas City Royals and the Los Angeles Angels was postponed due to inclement weather Sunday, April 15, 2018, in Kansas City, Mo. (AP Photo/Charlie Riedel) 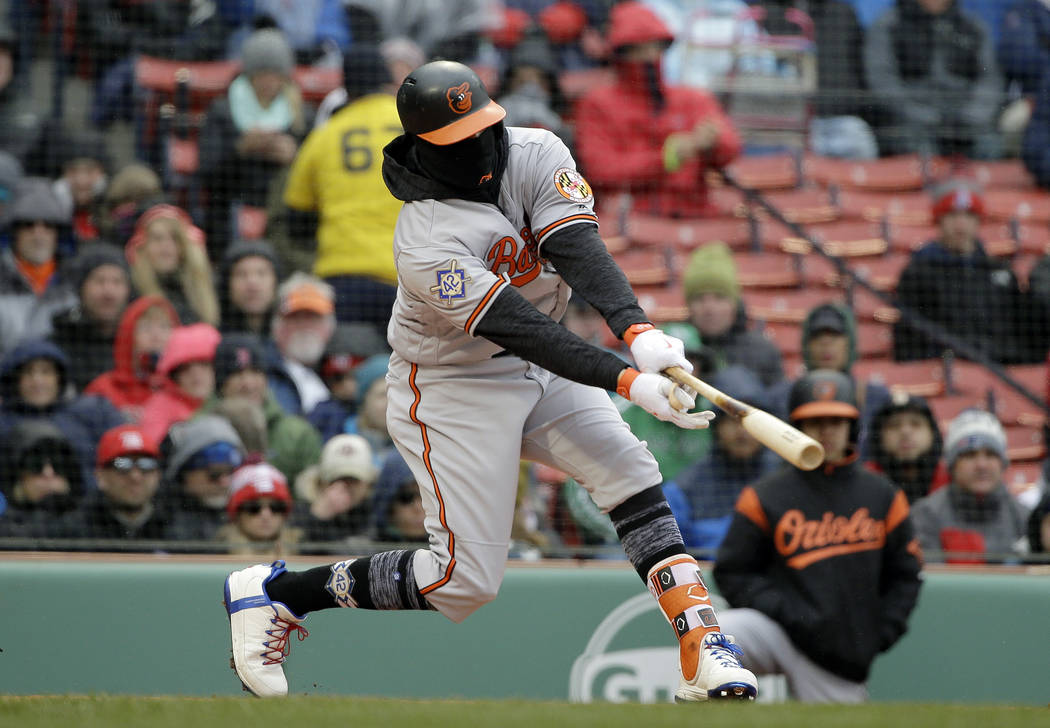 No Ohtani in Kansas City. No Judge in Detroit. One less off day for a couple more teams this summer.

Six more games were wiped out Sunday, running baseball’s total number of postponements to 21 just 2 1/2 weeks into the season. It’s baseball’s highest number through the end of April since it had 26 in 2007, and there are still a couple weeks to go this month.

The last time six games were wiped out in a single day was Sept. 12, 2008, and that situation was partly caused by Hurricane Ike battering the Gulf Coast. There was more dicey weather in the forecast for Monday, and Boston postponed its annual Patriots’ Day game for the first time since 1984.

“If it was up to me, no one would play north of Atlanta or east of Colorado in the first few weeks, but that’s not going to happen,” Braves reliever Peter Moylan said.

Today’s game has been postponed due to the weather. The game will be made up Monday, June 25. #RoyalsWeather pic.twitter.com/uLv2UmC7jo

Angels sensation Shohei Ohtani was slated to pitch for the third time before their game against the Royals was called off because of subfreezing temperatures. Aaron Judge and the Yankees were set to play a doubleheader against the Tigers after a rainout on Saturday, but the twinbill was pulled, too, with icicles all over Comerica Park. The last three games of Minnesota’s series at Target Field against the Chicago White Sox were lost to rain, then a blizzard.

Also postponed were Blue Jays at Indians, and Braves at Cubs one day after the teams played through miserable conditions at Wrigley Field.

“Driving out again, it was remarkably bad,” Cubs manager Joe Maddon said. “It’s just the right thing to do. It’s not about just getting games in. You want to be able to play the game on a major league-caliber, championship-caliber level.”

Tough to do on Sunday. The start of St. Louis’ game at Cincinnati was delayed for more than 2 hours because of the weather. Fans and players wore ski masks at Citi Field, and there was free hot chocolate at the concession stands at Fenway Park.

“I was miserable, nothing short of miserable,” Boston ace Chris Sale said after the Red Sox beat Baltimore 3-1. “I said it when I came out of the game: ‘This is the most miserable I’ve ever been on a baseball field, by far, not even close.’”

The rain continues to move slowly east. We remain delayed and will update again at approximately 3:00 p.m. #Reds pic.twitter.com/l6cczn0J4D

It was 31 degrees in Kansas City with an 18 mph wind, making it feel like 20 degrees. A night earlier, the Angels and Royals finished up in snow.

“Just the simple fact that I was going to be pitching in cold weather, that was a little worrisome for me,” Ohtani said through a translator.

In St. Petersburg, Florida, the Philadelphia Phillies beat Tampa Bay 10-4 inside the domed Tropicana Field. Outside, severe weather prompted a tornado warning for the ballpark area during the middle innings. An announcement made at the stadium said police and fire officials were monitoring the situation.

No such worries in San Diego. With temperatures in the 70s, the Padres playfully tweeted: “Attention: Due to weather, today’s game will be … played as scheduled.”

Attention: Due to weather, today’s game will be…

The Padres included a bright picture of Petco Park, along with an emoji of a smiley face with sunglasses, as they hosted the Giants.

This major league season began on March 29 for its earliest start ever, excluding special openers in international sites such as Japan and Australia. It also spans 187 days, instead of 183, as part of the labor agreement between players and owners, but that extra room to maneuver is taking a hit.

Chicago’s game against Atlanta was rescheduled for May 14, creating a stretch of 11 games in 10 days for the Cubs and 16 straight games for the Braves without an off day. Cleveland plays 18 games in three cities over 17 days after its weekend against Toronto was rescheduled for a traditional doubleheader on May 3.

The Angels get to return to Kansas City on June 25, between a home series against Toronto and a visit to Boston. The Yankees had a nine-game, three-city trip turn into 11 games and four cities when they were rescheduled for a doubleheader June 4 in Detroit, but at least that stretch concludes back in New York at the crosstown Mets.

“Sometimes we talk about our game — only the strong survive,” Minnesota manager Paul Molitor said. “It’s mental toughness, and this has required a little more than normal.”

Molitor and the Twins were set to escape chilly Minnesota for the warmth of Puerto Rico and a two-game series against Cleveland beginning on Tuesday night. Molitor planned to hold an optional workout Monday in Puerto Rico after the lost weekend against the White Sox.

“Baseball’s all about a routine, developing a routine and going about yourself every day at the park, knowing when you’re going to play and all that stuff,” Twins second baseman Brian Dozier said. “It does throw you for a loop, I guess, in that sense. At the same time, we make a living ad-libbing. You got to ad-lib in this game and you got to take it in stride.”