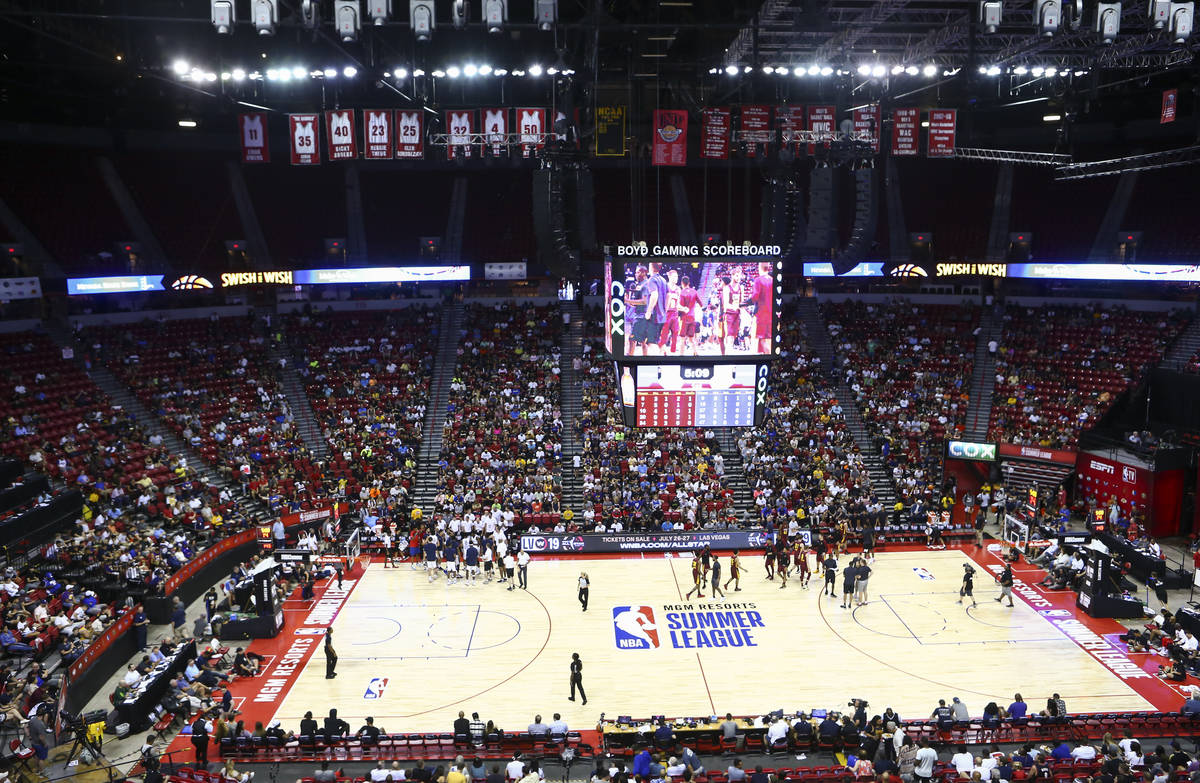 Basketball fans look on during a timeout in a game between the Cleveland Cavaliers and the New Orleans Pelicans at the Vegas Summer League in the Thomas & Mack Center in Las Vegas on Wednesday, July 10, 2019. (Chase Stevens/Las Vegas Review-Journal) @csstevensphoto 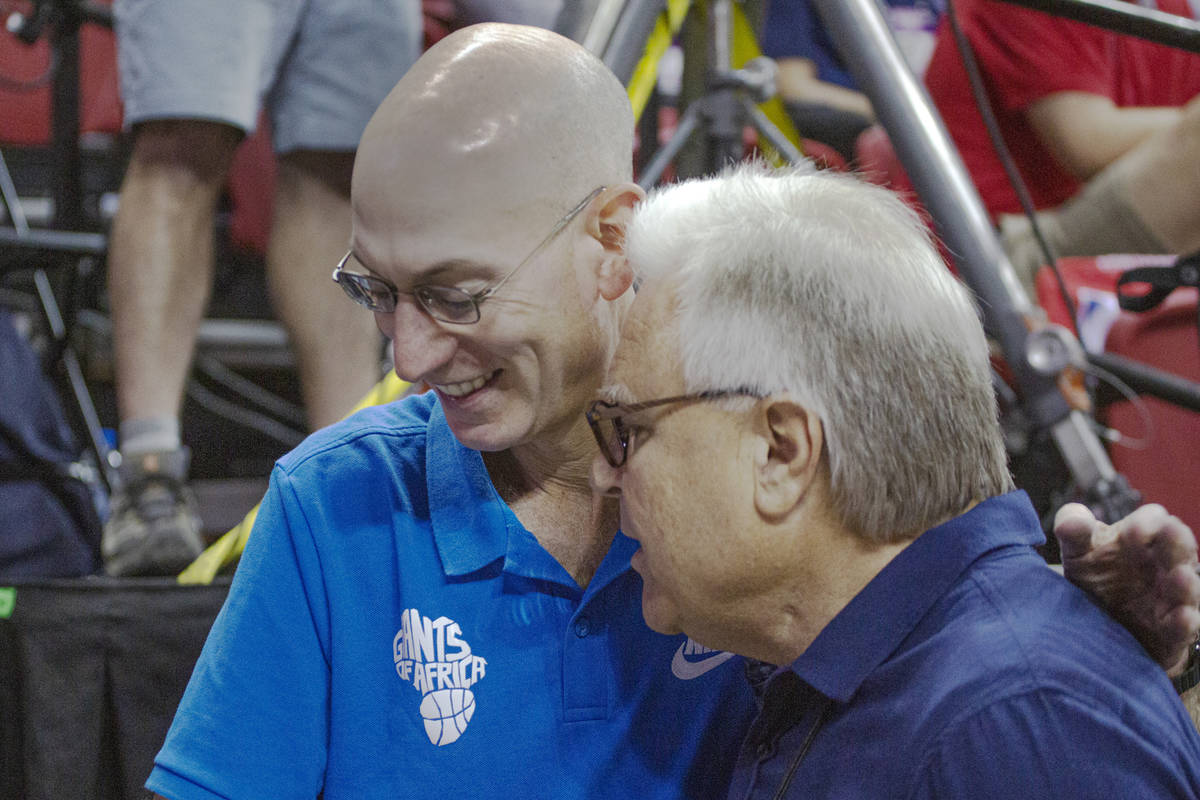 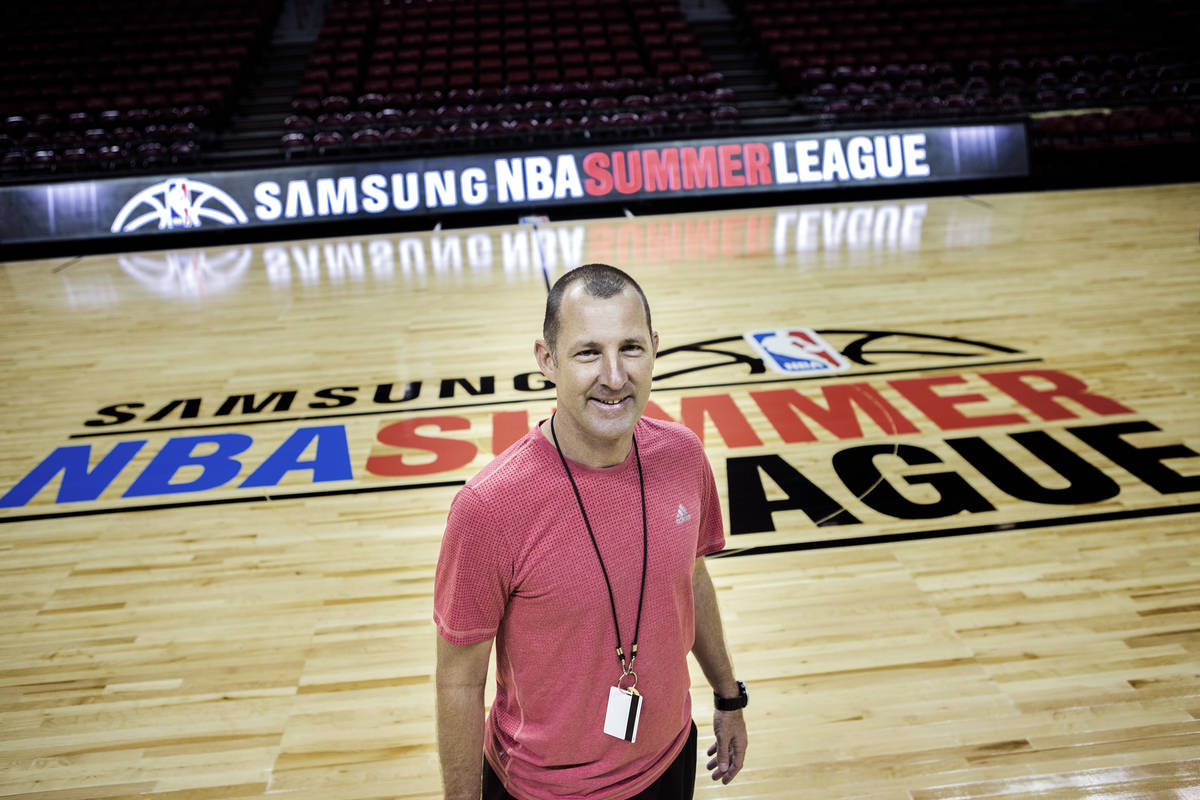 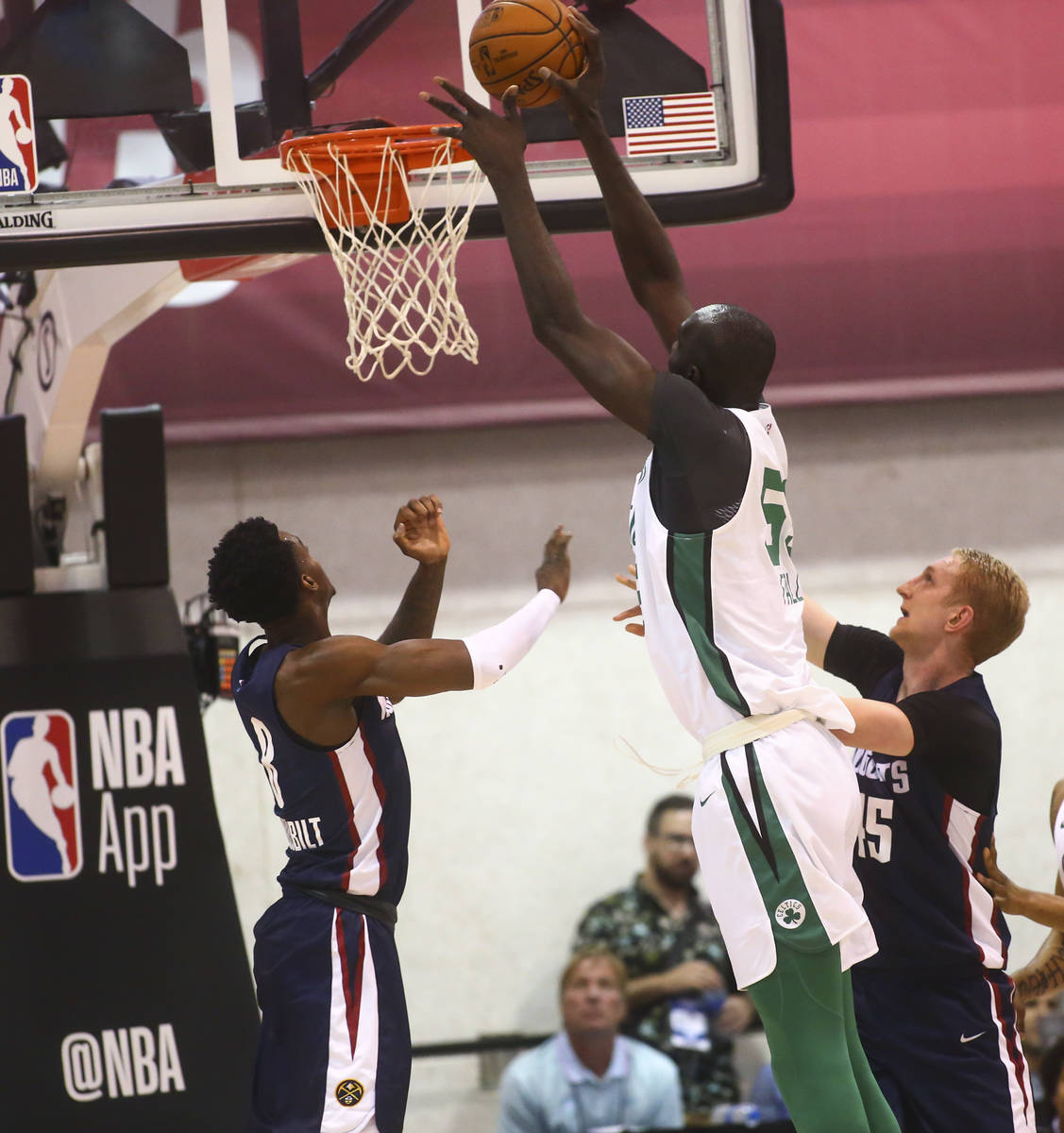 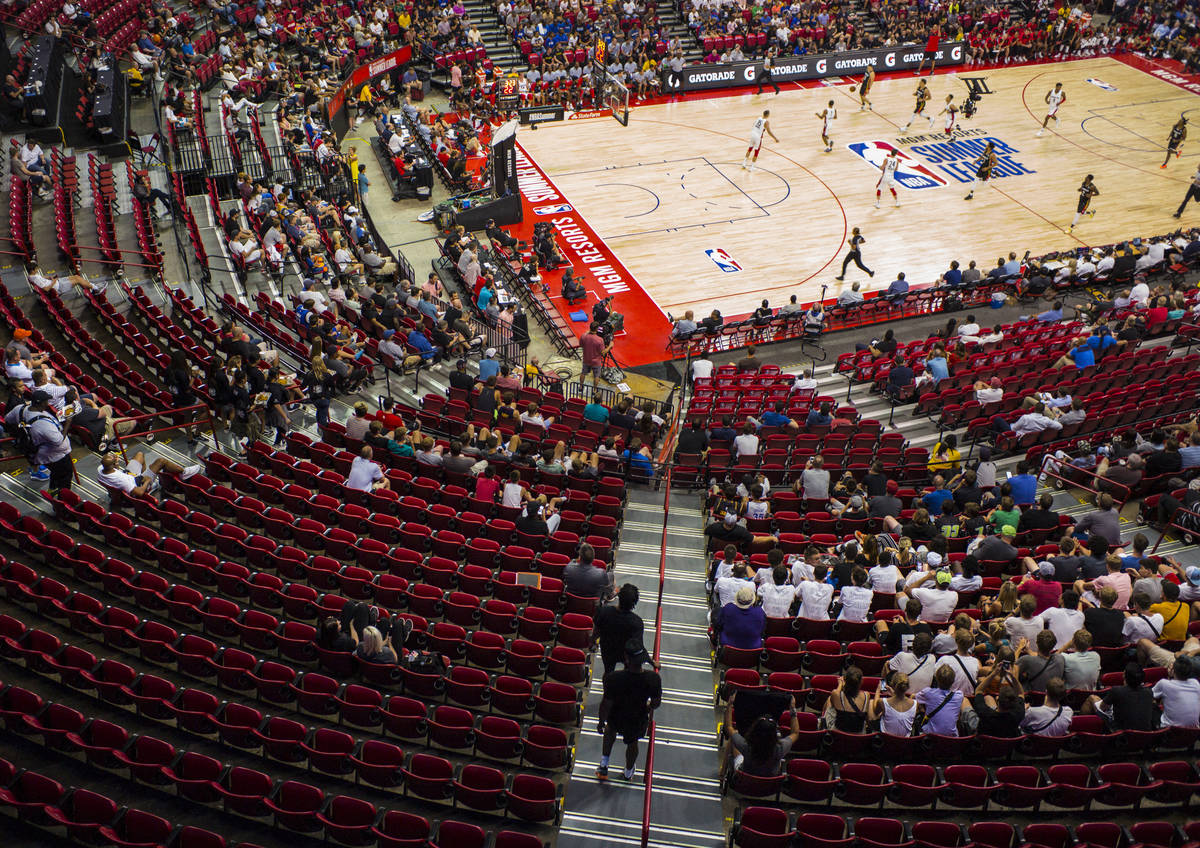 Basketball fans watch the first half of a basketball game between the Atlanta Hawks and the Washington Wizards at the Thomas & Mack Center at the Vegas Summer League in Las Vegas on Thursday, July 11, 2019. (Chase Stevens/Las Vegas Review-Journal) @csstevensphoto 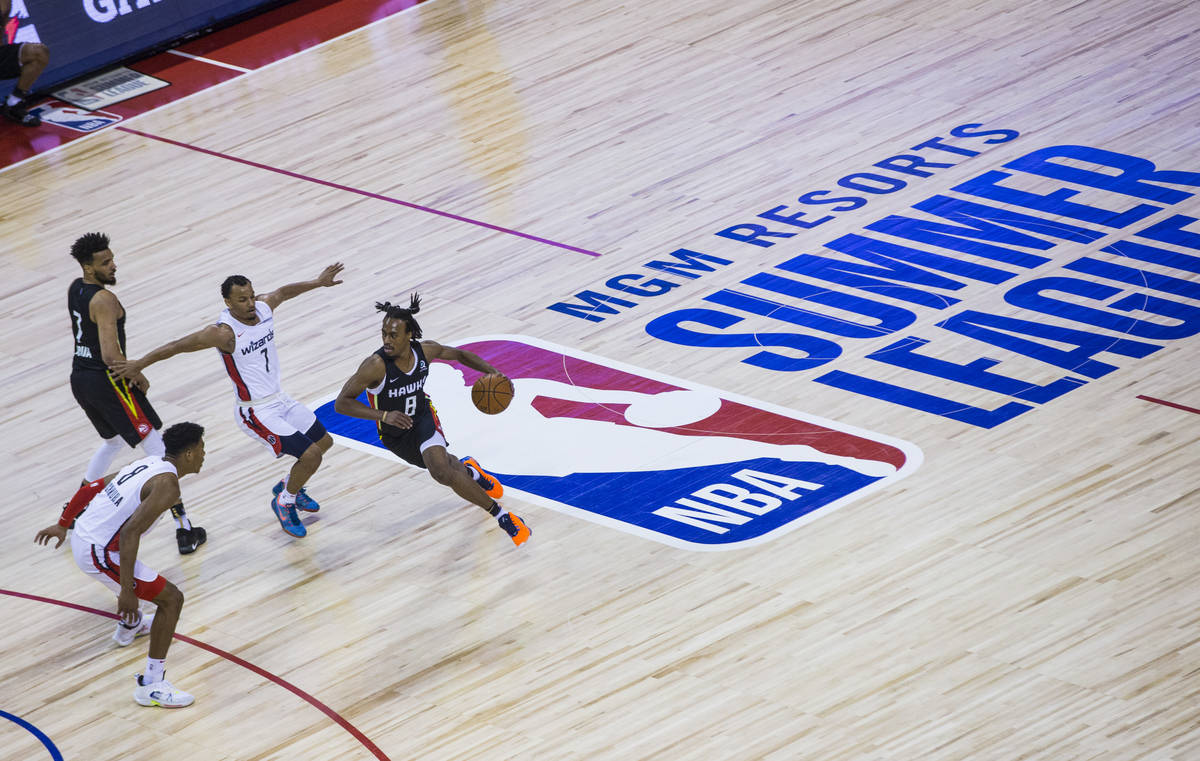 Atlanta Hawks' Tahjre McCall (8) brings the ball up court past Washington Wizards' Justin Robinson (7) during the first half of a basketball game at the Thomas & Mack Center at the Vegas Summer League in Las Vegas on Thursday, July 11, 2019. (Chase Stevens/Las Vegas Review-Journal) @csstevensphoto 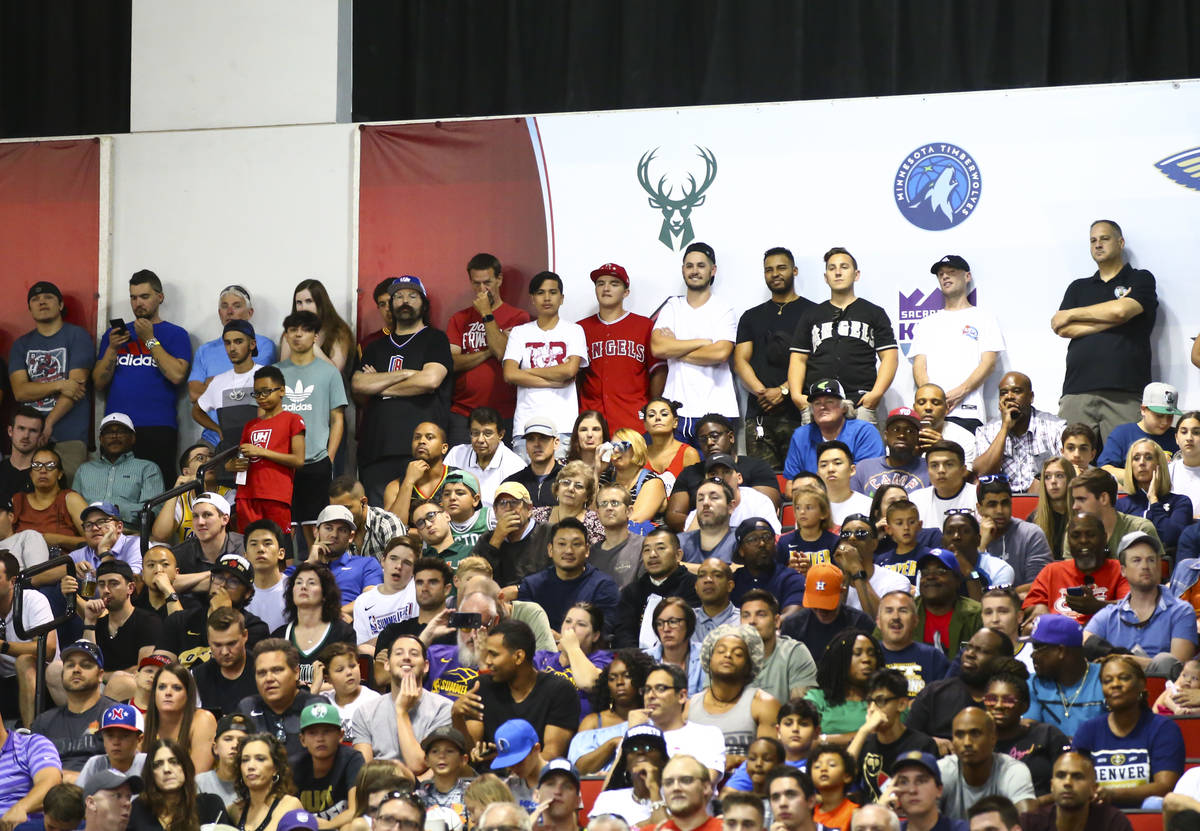 Basketball fans watch the first half a basketball game between the Boston Celtics and the Denver Nuggets at the Vegas Summer League in the Cox Pavilion in Las Vegas on Tuesday, July 9, 2019. (Chase Stevens/Las Vegas Review-Journal) @csstevensphoto 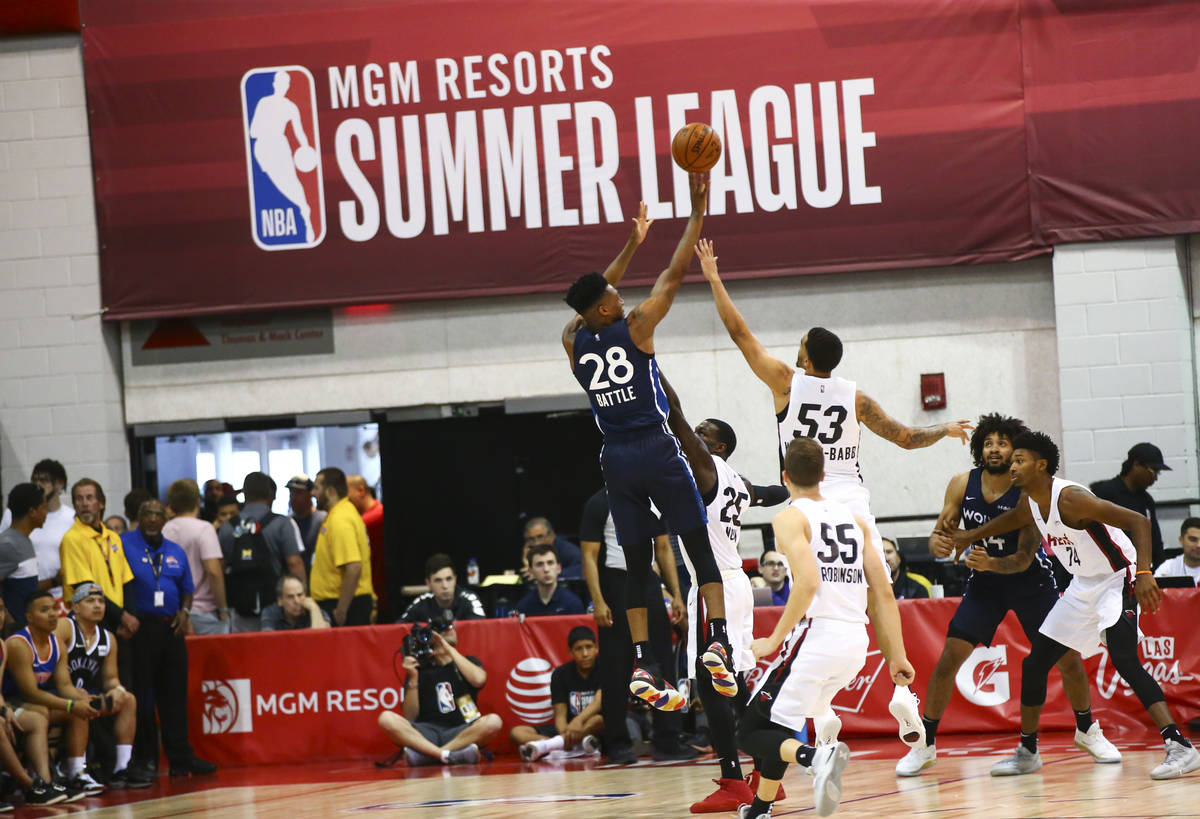 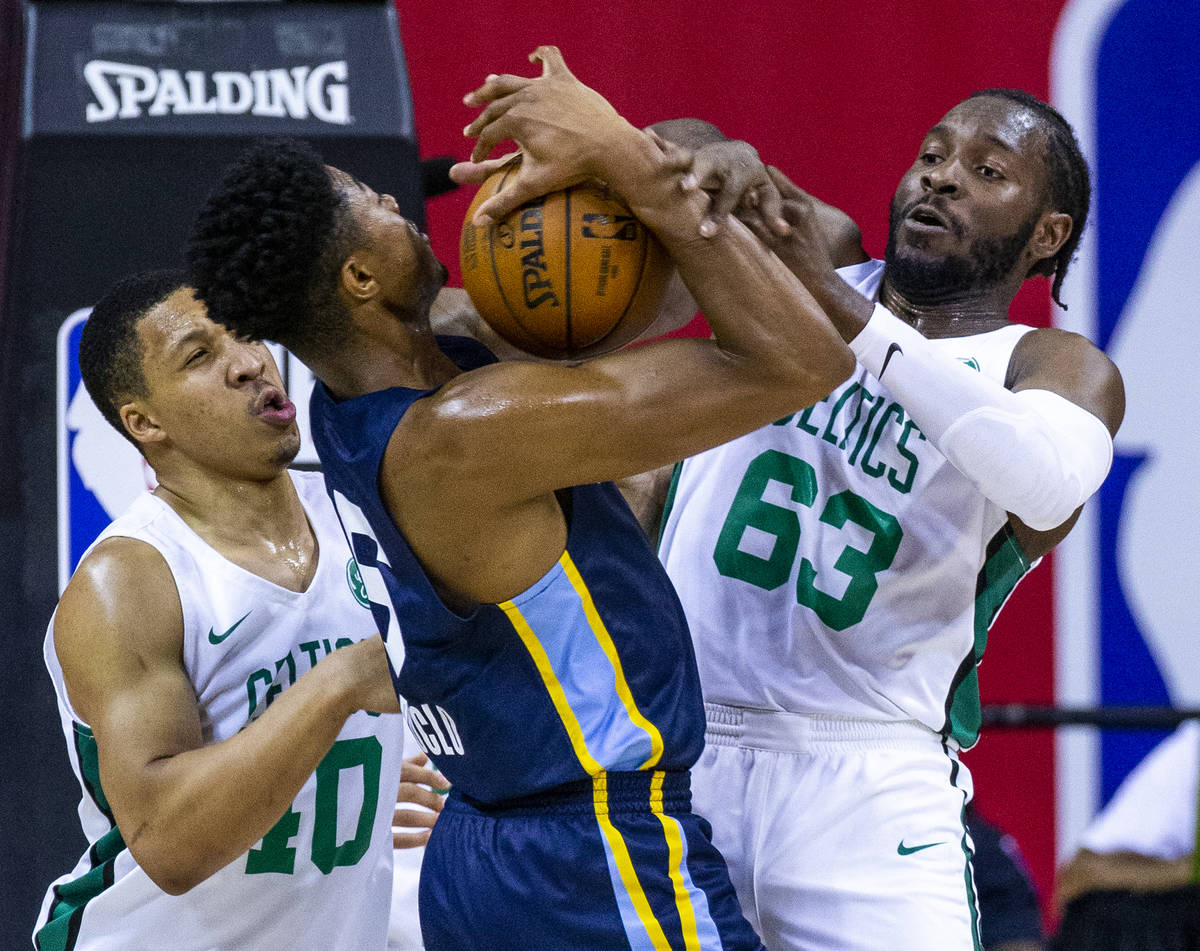 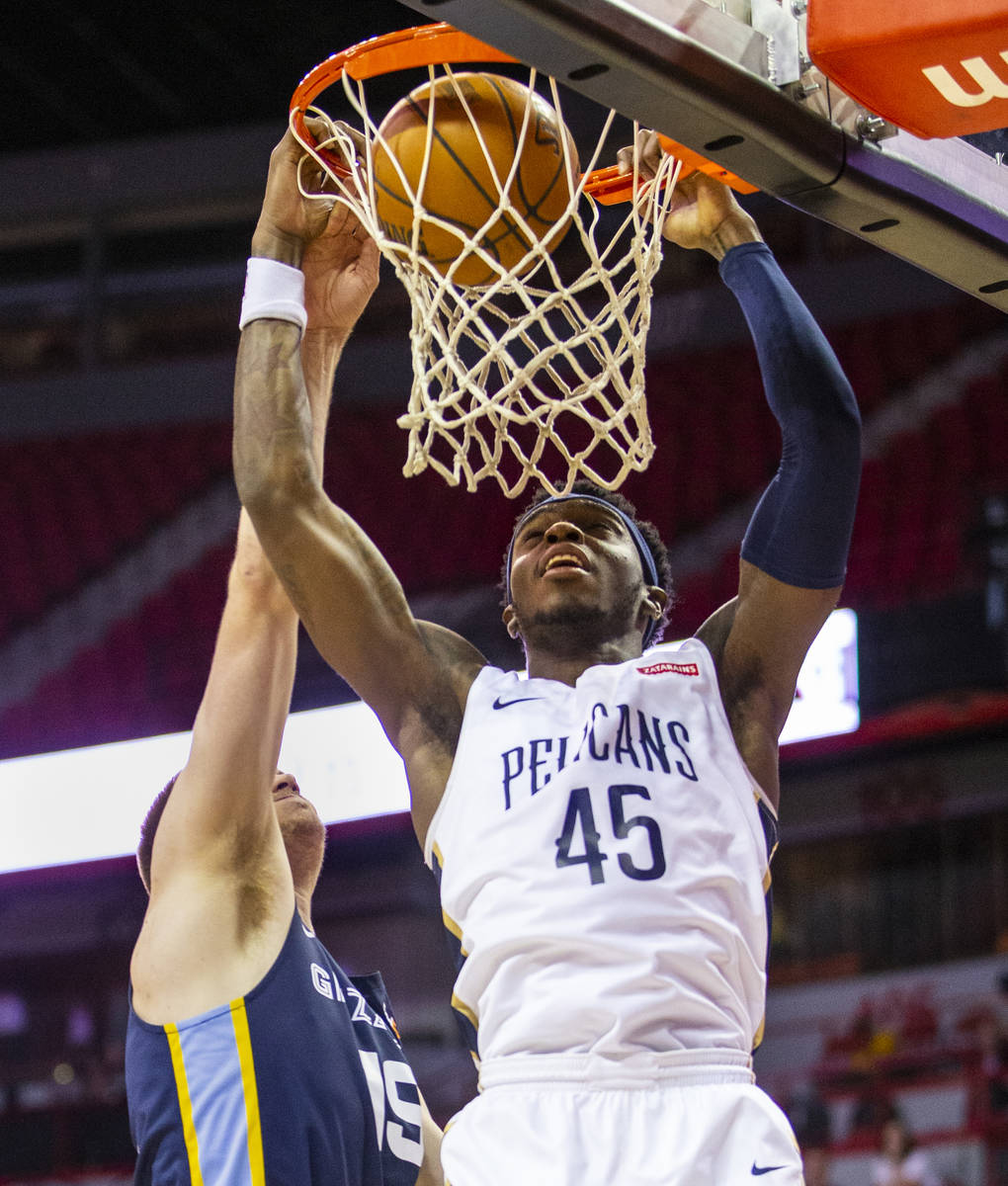 New Orleans Pelicans forward Zylan Cheatham, right, gets inside for a shot inside of Memphis Grizzlies forward Peyton Aldridge, left, during the first half of their Vegas Summer League semifinals game at the Thomas & Mack Center on Sunday, July 14, 2019, in Las Vegas. (L.E. Baskow/Las Vegas Review-Journal) @Left_Eye_Images 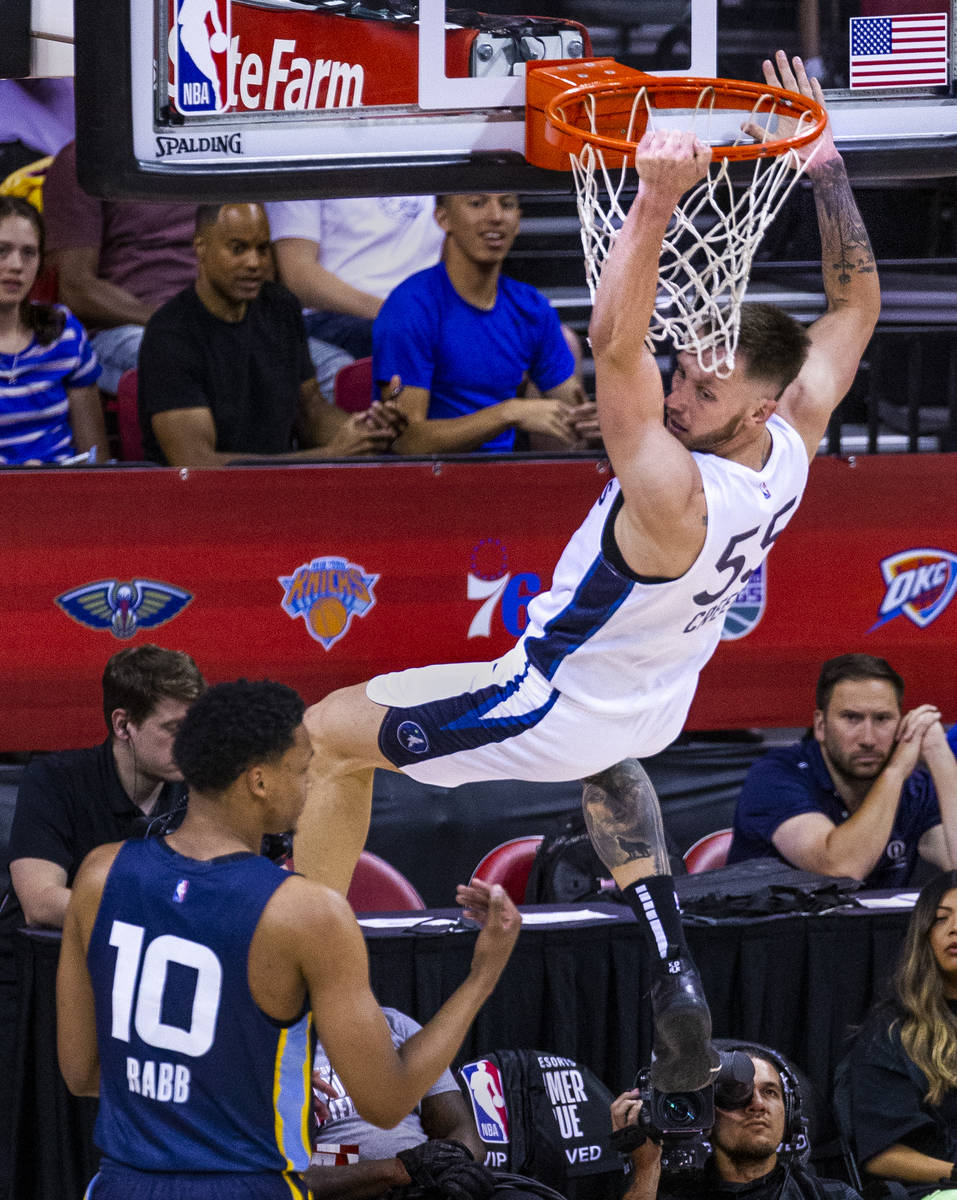 Minnesota Timberwolves forward Mitch Creek, above, looks back after a big dunk over Memphis Grizzlies forward Ivan Rabb during the second half of their Vegas Summer League finals game at the Thomas & Mack Center on Monday, July 15, 2019, in Las Vegas. (L.E. Baskow/Las Vegas Review-Journal) @Left_Eye_Images 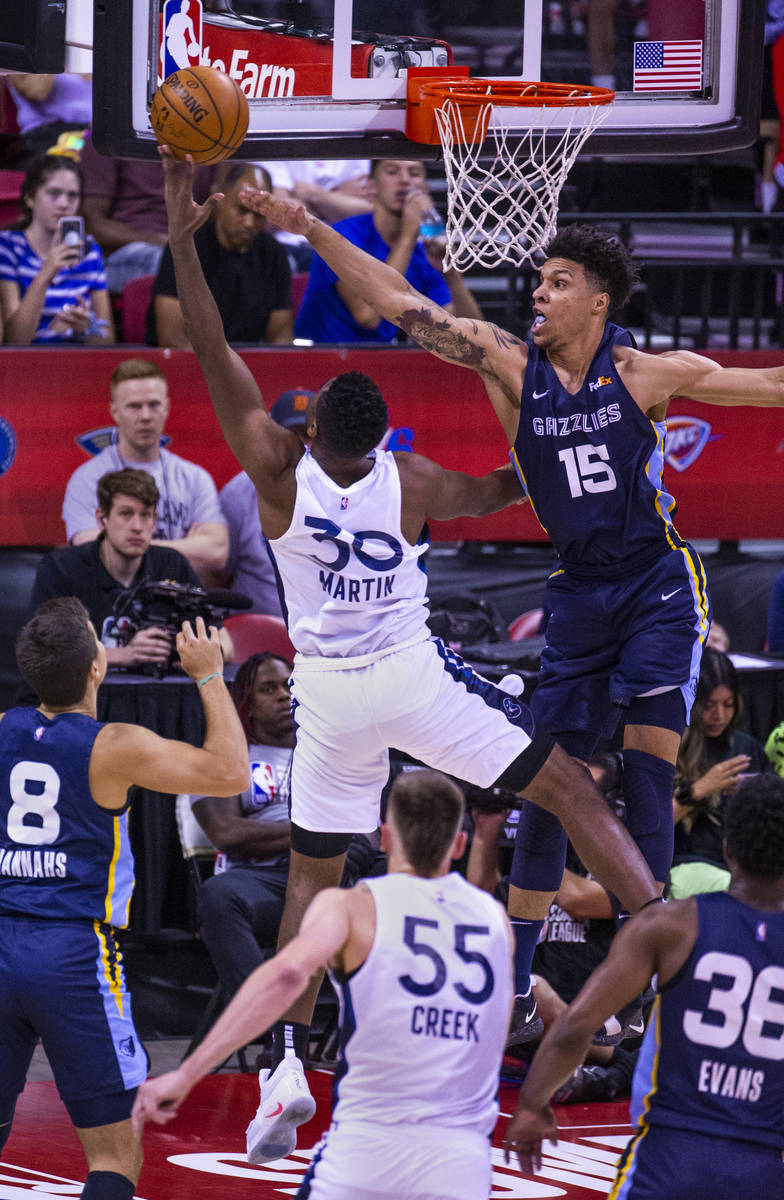 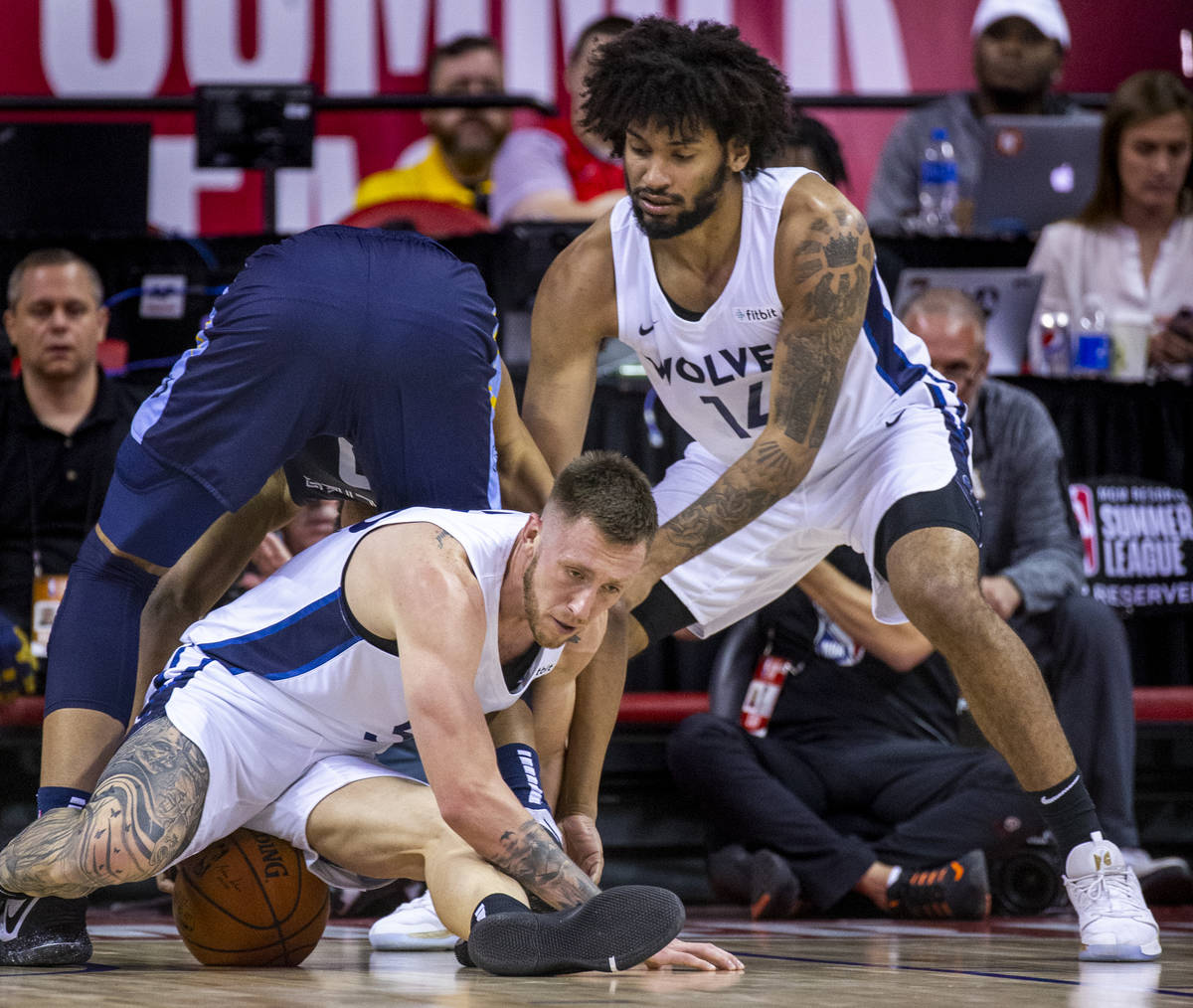 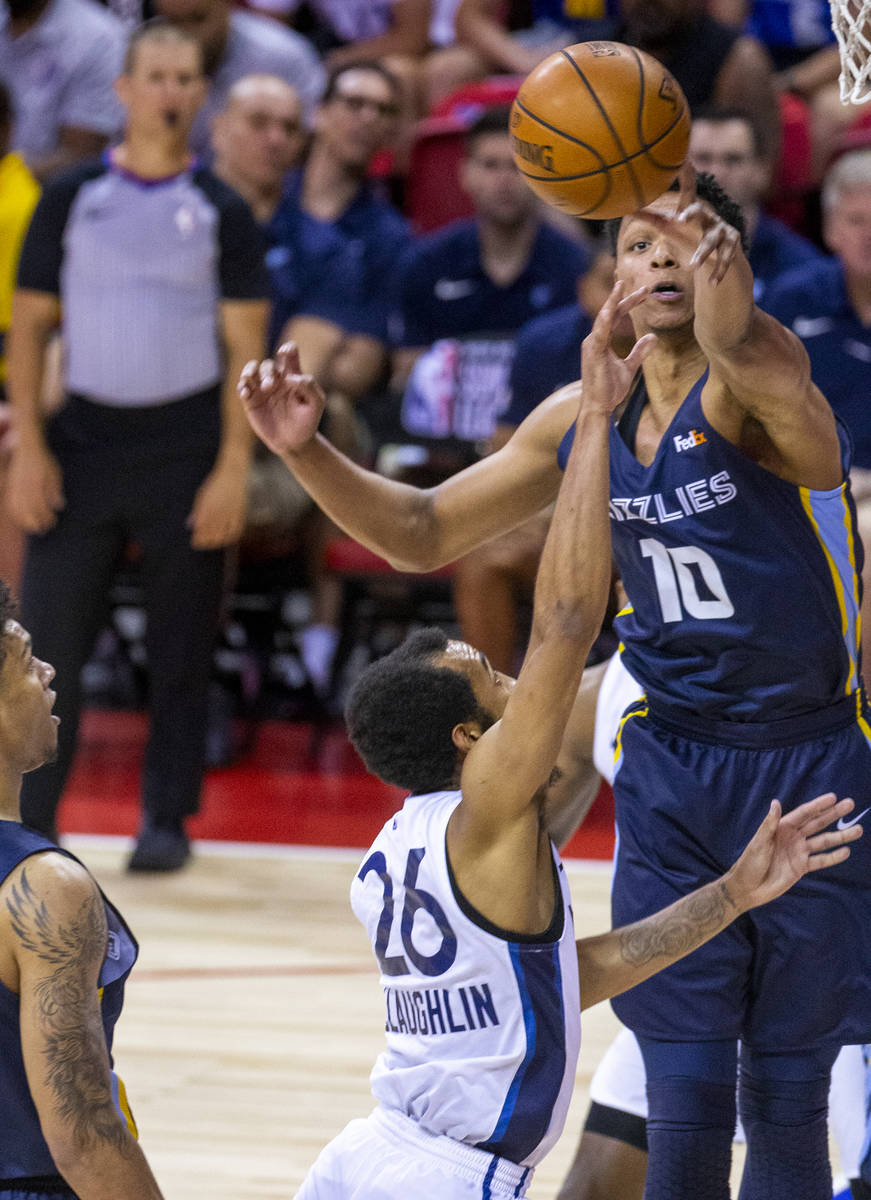 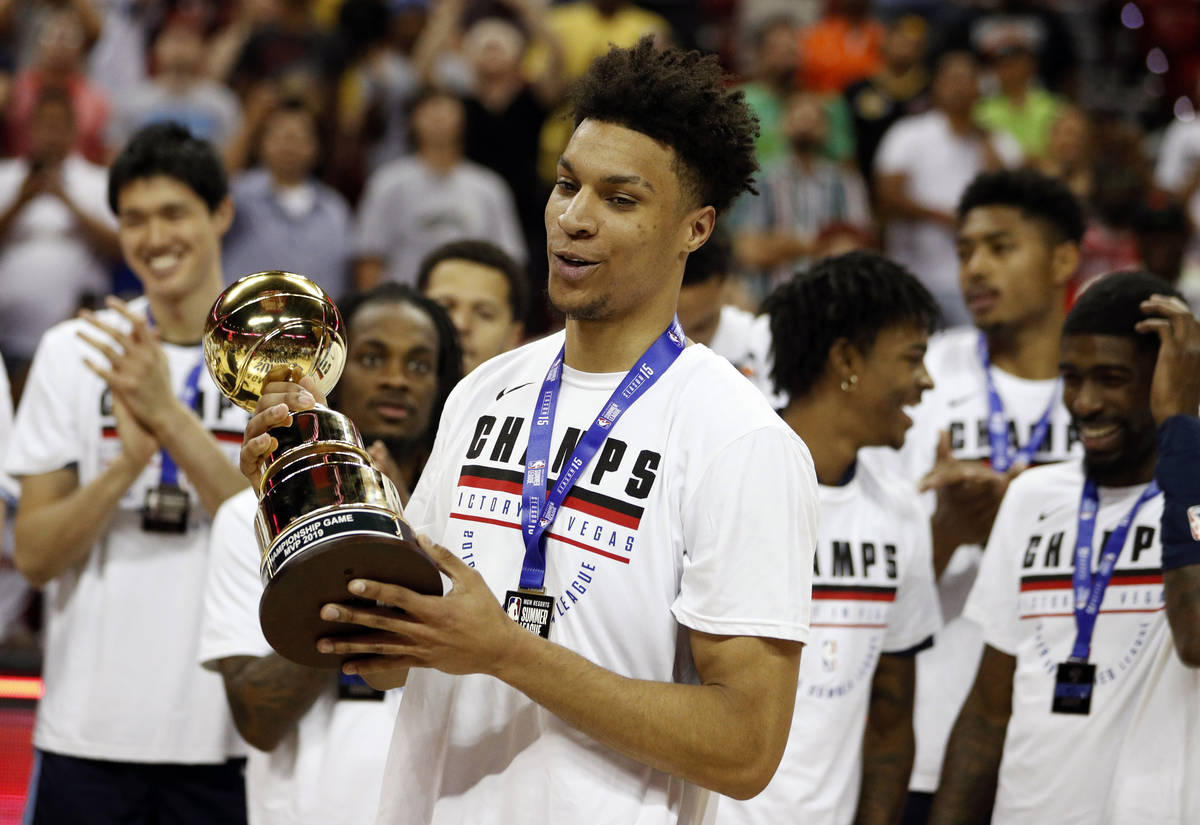 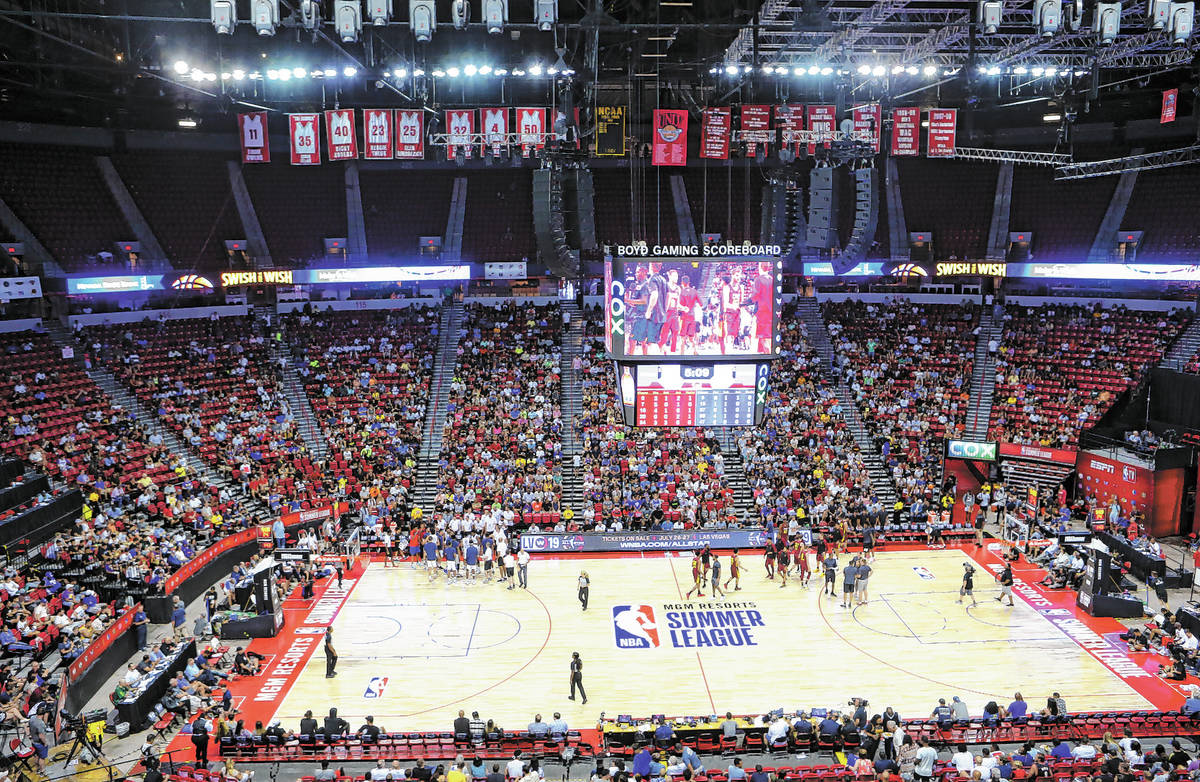 Basketball fans look on during a timeout in a game between the Cleveland Cavaliers and the New Orleans Pelicans at the Vegas Summer League in the Thomas & Mack Center in Las Vegas on Wednesday, July 10, 2019. (Chase Stevens/Las Vegas Review-Journal) @csstevensphoto

Editor’s note: The NBA planted its seeds in Las Vegas during the 1983-84 season and still has a growing relationship with the city. This is the final installment of a five-part series detailing the league’s history in Las Vegas.

Warren LeGarie figured it out.

In a couple of months during the spring of 2004, the veteran coaching agent received approval from the NBA to conduct a summer basketball league in Las Vegas, secured a venue and convinced six teams to play. The Vegas Summer League was ready to launch at Cox Pavilion — save for one problem.

“We had racks of basketballs for one side. We didn’t have them for the other,” LeGarie said with a laugh. “We quickly remedied that by finding a sporting goods store nearby. … It was a little bit of a blur.”

The Vegas Summer League has transformed from a six-team enterprise without enough balls for warmups into a full-on basketball convention, complete with all 30 NBA teams and two packed arenas with as many as 10 games a day.

The event provides showcase opportunities for draft picks and free agents vying for professional contracts, but perhaps more important, it provides a place where top executives, agents and players can convene to conduct business beyond the basketball court.

All the while, LeGarie and co-founder Albert Hall have stayed loyal to the community that first provided them their platform, generating a significant economic impact and creating a firm foothold for the NBA in the city.

“While we, of course, don’t have an NBA team in Las Vegas, this seems like the next best thing,” NBA Commissioner Adam Silver said last summer. “For roughly two weeks of the calendar in July, enormous attention is on the NBA. … Everybody is seemingly in town both to enjoy the basketball and to enjoy the city.”

Summer leagues weren’t exactly new by the time LeGarie devised his idea. In fact, he broke into the business during the 1980s in part by attending the Summer Pro League at Loyola Marymount in Southern California.

That event wasn’t sponsored by the NBA, but still featured plenty of first- and second-round draft picks — along with other undrafted players and free agents. LeGarie began building connections there and eventually moved to Europe, where he represented more than 100 players and met coaches who helped him develop contacts in the NBA.

He ventured stateside during the summer and noticed the market had become saturated with too many summer leagues. Basketball, he thought, needed one centralized summer location.

“(The other leagues) were all really good, but there wasn’t that galvanizing place,” said Hall, who met LeGarie while working in basketball operations for the Seattle SuperSonics. “We always thought we could do a little bit better and make it more attractive by bringing teams to Vegas.”

LeGarie pitched Las Vegas to the NBA in 1999 and had hoped to hold games at the MGM Grand. But the league did not want any direct affiliation with a casino, forcing him to examine other venues. He recalled the setup at Loyola Marymount and thought UNLV could provide a similar environment. The school emerged as a willing partner, though Boston had become the premier summer league site after hosting a phenom named LeBron James in 2003.

But luck was on LeGarie’s side, as the Democratic National Convention descended upon Boston in 2004 and occupied too much hotel space that July for its summer league to comfortably operate.

“We were told to start something from scratch and make it work in a very, very short time,” LeGarie said.

The Vegas Summer League has since grown so much it has essentially forced other summer leagues to cease operations. The league expanded to 16 teams in 2005 and 22 in 2007, using Cox Pavilion and the Thomas & Mack Center for the first time in a seminal development for the event.

Point guards Jeremy Lin and John Wall dueled in 2010, captivating the city and a national audience in what LeGarie called another seminal moment for the league’s popularity. It debuted its tournament format in 2013 and welcomed all 30 NBA teams in 2018.

“I never thought it was going to get to where it is today. No one thought it would,” Las Vegas Events president Pat Christenson said. “Every year, what we would do is work with (LeGarie and Hall). Let’s sharpen this, and let’s see what could happen. … Then every year after that, they would do something that was more fan friendly. So it grew and it grew.”

There’s something for everybody at the Vegas Summer League: The players. The executives. The agents. The fans.

LeGarie said he’s most satisfied with the way his league brings people together. The fun it provides is what he finds most fulfilling.

The NBA also expanded its presence in Las Vegas in 2018 by bringing its annual G League Winter Showcase to the Mandalay Bay Convention Center. The four-day showcase is similar to the Summer League in offering players a platform to display their skill to top executives.

“The opportunity is here. The space is here. It’s a location where folks want to come. I think the town gets it,” G League president Shareef Abdur-Rahim said in 2018. “Las Vegas gets the ability of sports to energize folks and get folks together. A partner like that, it’s easy for us to come and make that work here.”

Because in the past four decades, Las Vegas has proven to be a market capable of supporting the league in a variety of ways. It was a home away from home for one of its franchises. A place of refuge during a time of crisis. It hosted one of the NBA’s most iconic moments and one of its most popular events.

Is an NBA franchise next?

All that is missing now is a permanent residence in the city.

MGM Resorts International purchased the WNBA’s San Antonio Stars in 2017 and moved them to Las Vegas as the Aces. MGM executives have spoken about a desire to acquire an NBA team, which would play at T-Mobile Arena. The company co-owns the arena, which houses the NHL’s Golden Knights.

There also has been speculation that the NBA, whose season has been suspended because of the coronavirus pandemic, could finish the year in Las Vegas. The MGM has been in talks with various sports leagues about hosting games without fans at their facilities, and even sent the NBA a proposal outlining its plan.

“You already have a venue that can house it. You’ve got the market. You’ve got the city,” Christenson said. “You’ve proven in terms of the destination, the fans will travel here for the games, too. Vegas is definitely a professional sports city, and I can’t imagine why this wouldn’t be their top targeted market either for growth or relocation.”