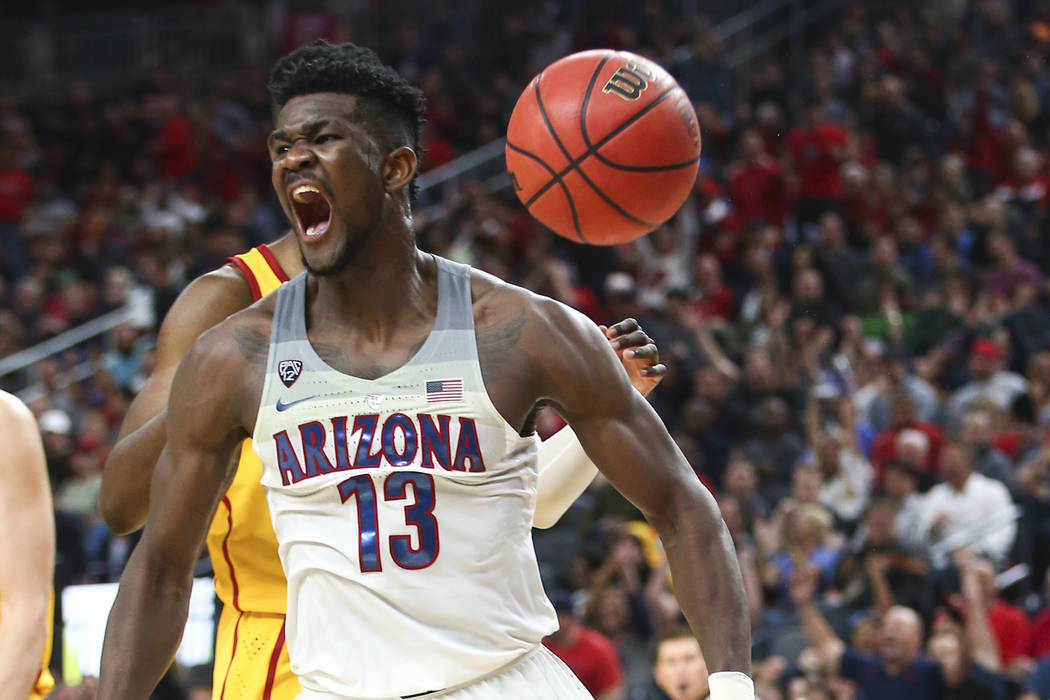 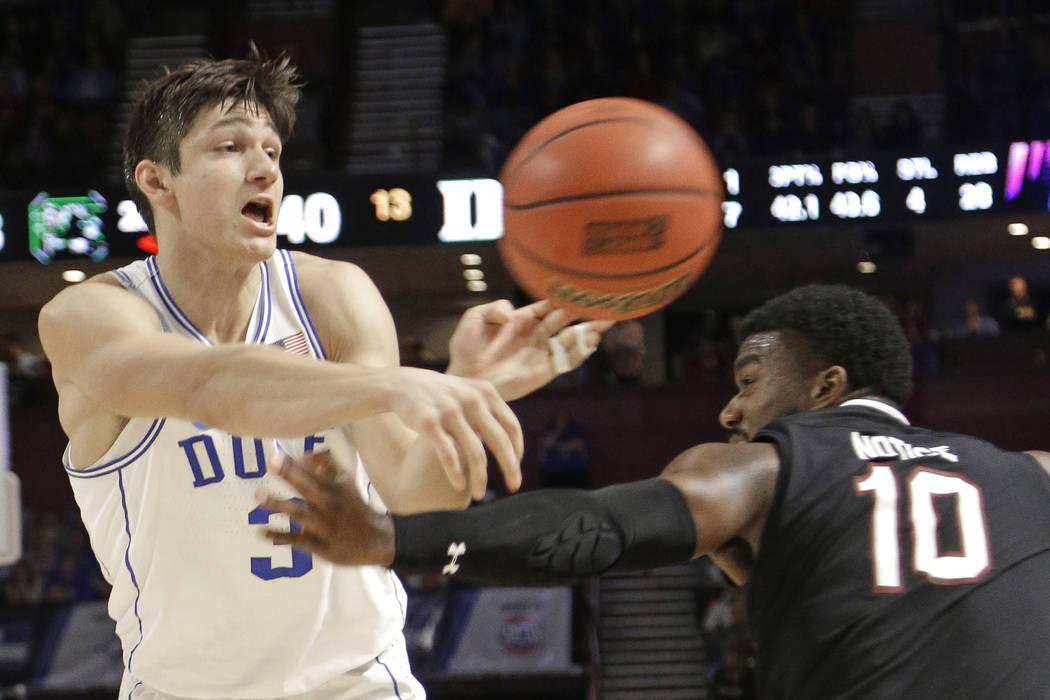 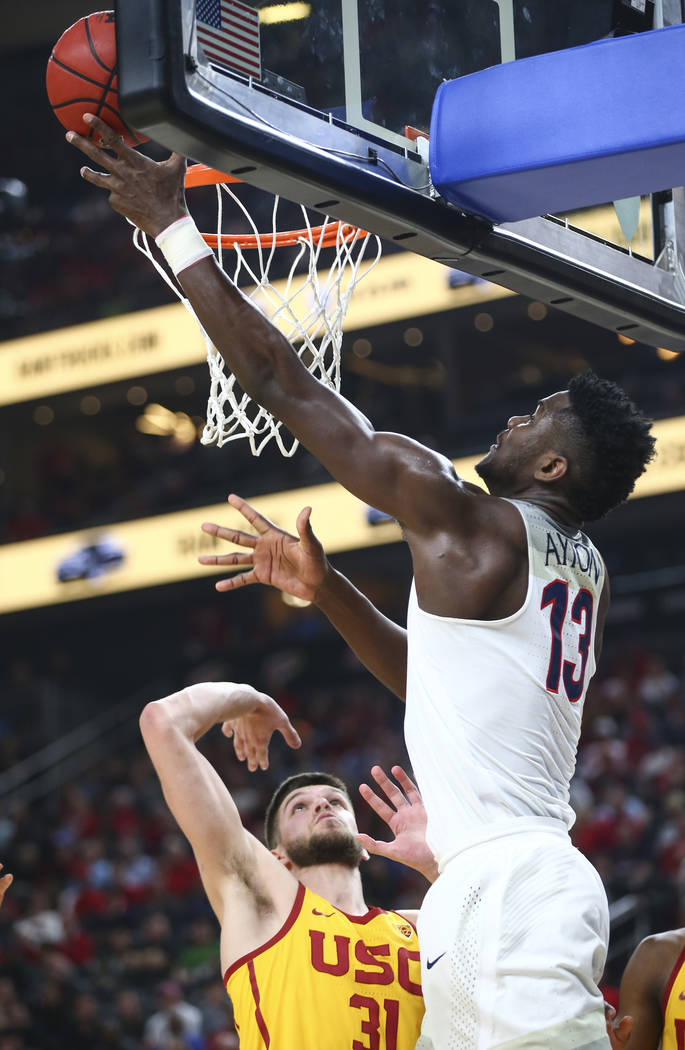 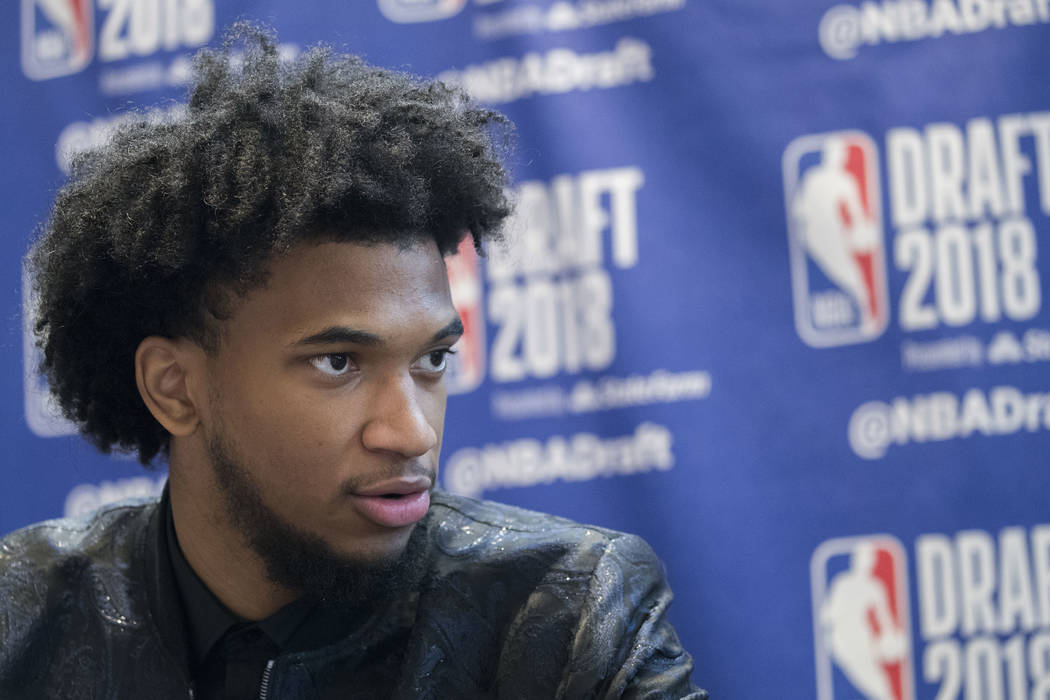 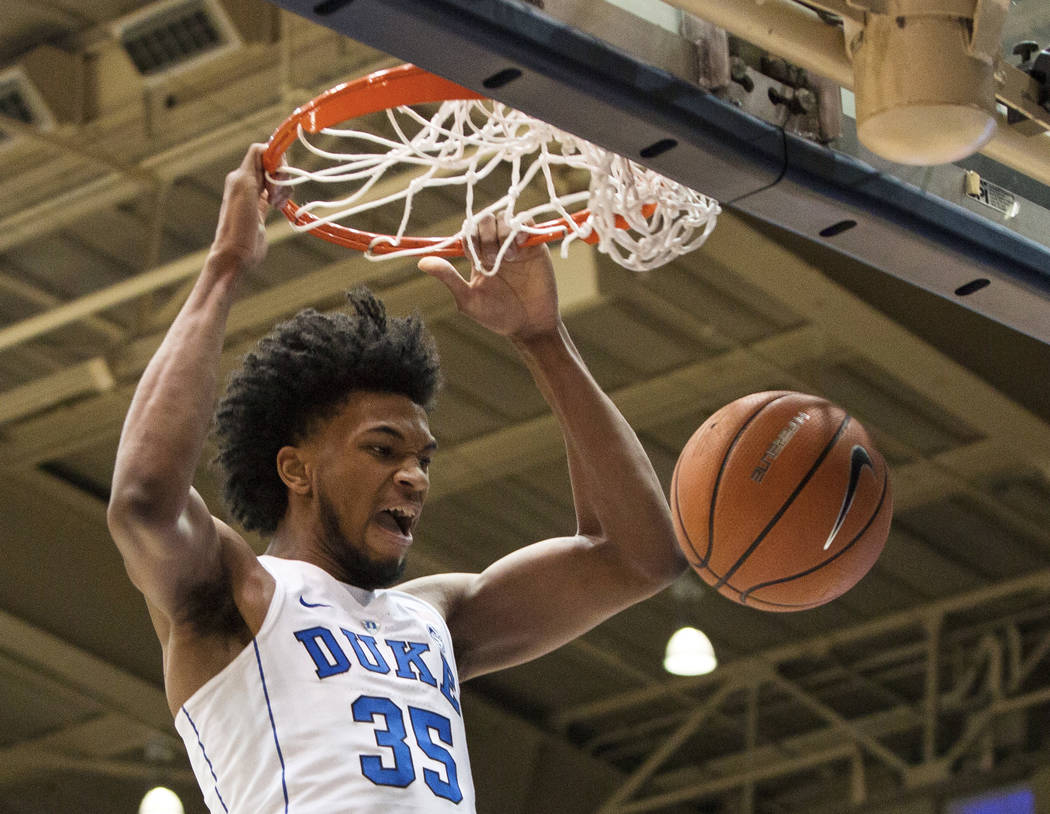 FILE - In this Jan. 27, 2018, file photo, Duke's Marvin Bagley III (35) dunks the ball during the first half of an NCAA college basketball game against Virginia in Durham, N.C. Marvin Bagley III dominated at Duke, while fellow freshman Michael Porter Jr. barely saw action at Missouri due to injury. Yet they’ll likely be the first forwards to hear their names called during Thursday’s draft. Bagley is a possible No. 1 overall pick and double-double machine with a long frame. (AP Photo/Ben McKeown, File) 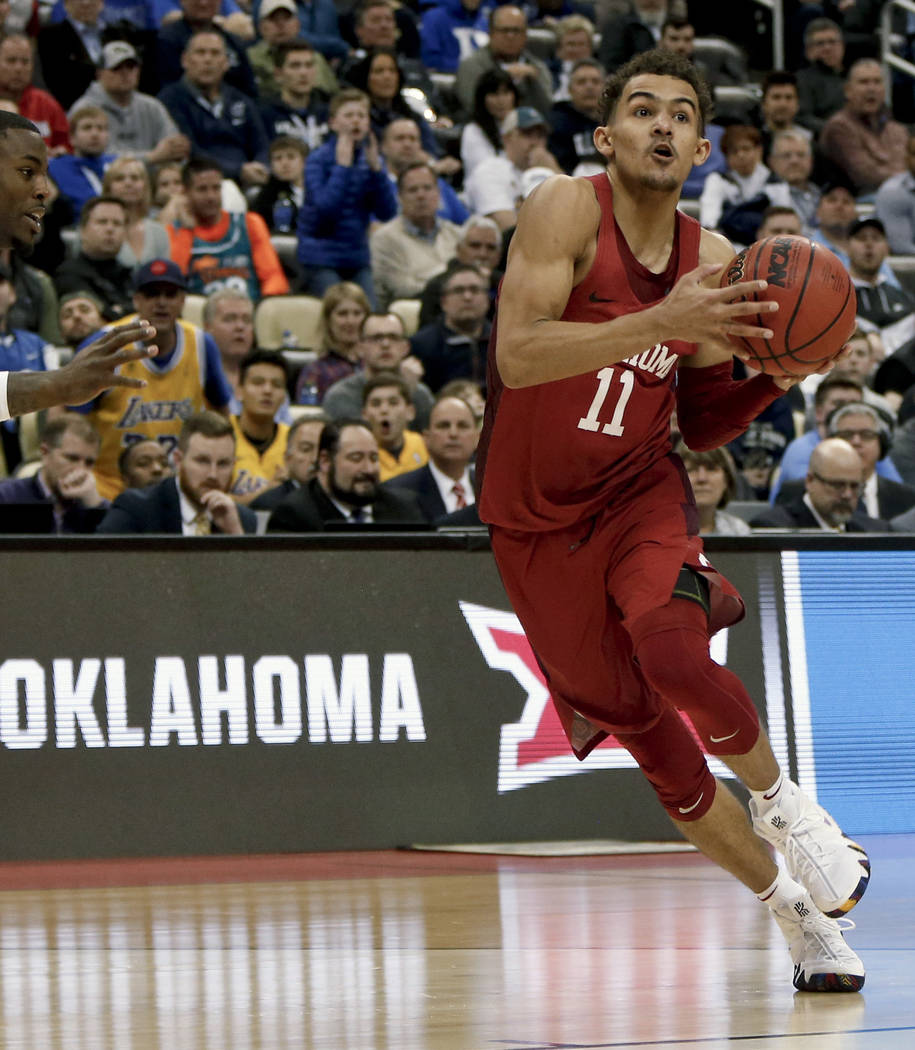 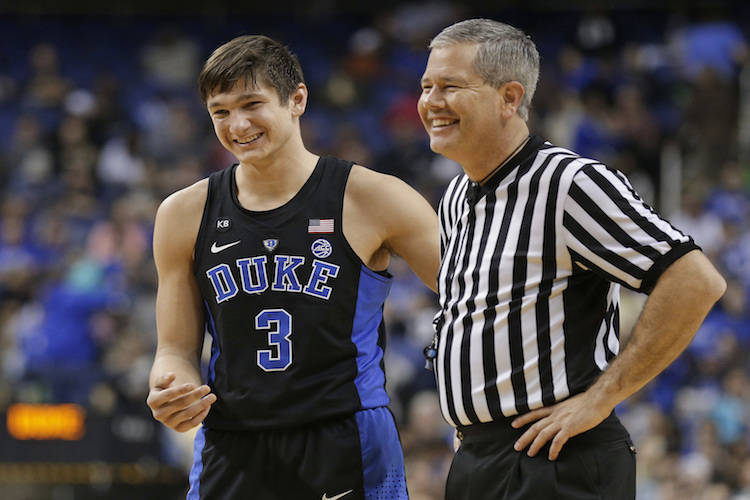 Duke's Grayson Allen (3) shares a laugh with an official in the second half of an NCAA college basketball game against Elon in Greensboro, N.C., Wednesday, Dec. 21, 2016. Duke won 72-61. (Chuck Burton/AP) 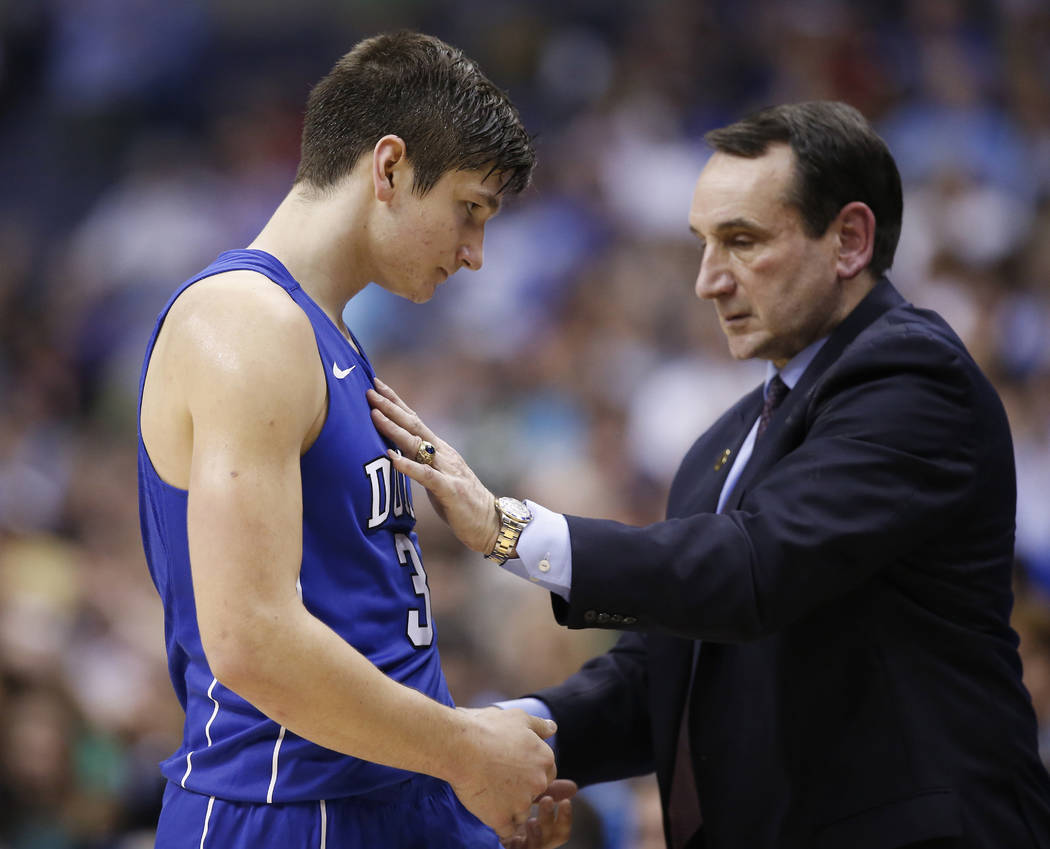 In this Thursday, March 10, 2016, photo, Duke guard Grayson Allen (3) and Duke head coach Mike Krzyzewski talk during the second half of an NCAA college basketball game in the Atlantic Coast Conference tournament against Notre Dame in Washington. Another stellar recruiting class by Coach K has the Blue Devils primed for a second title run in three years. (AP Photo/Alex Brandon)

An announced record 127,843 fans showed up for the 11-day event, and a question was how the Summer League would follow such an act.

But with another strong set of recognizable names — and, for the first time, the presence of all 30 teams — ticket sales are up as much as 8 percent.

Just about every first-round draft pick will make an appearance in the event, which is Friday through July 17 at the Thomas & Mack Center and Cox Pavilion. The Dallas Mavericks’ Luka Doncic is an exception after a long EuroLeague, and the Denver Nuggets’ Michael Porter Jr. might not play because of a bad back.

Here are the 10 most intriguing players who are expected to compete:

He was the No. 1 overall draft pick, meaning all eyes will be on Ayton. Given the Suns also traded for Mikal Bridges and selected point guard Elie Okobo at the top of the second round, this also is the team to watch over the 12-day event. At 7 feet, Ayton will be a physical presence inside.

Sacramento had the second choice in the draft, and took Bagley over Doncic. The verdict won’t be in during the Summer League whether that was the correct decision, but it will be the first hint. Bagley’s matchup with Ayton on the event’s second day will be worth arriving early to see.

He was drafted at No. 5 by the Dallas Mavericks and sent to Atlanta for Doncic. Young was well on his way to college player of the year last season, but went into a terrible slump down the stretch. His job is to revive NBA interest in a city that barely knows it has a team.

He has lottery-pick talent, but uncertainty over a possible knee injury and questions about his attitude dropped him to the Celtics at 27th. This could work out quite well for both sides, with Williams joining a team that should contend to make the NBA Finals.

He’s the rare top modern player who stayed four years in college, the face (for good reasons and bad) at Duke over that time. The NBA made him wait for a reason, and now it’s up to Allen to prove that his game translates to the next level. His willingness to play the villain made him a lightning rod, but it’s that determination that may give Allen a shot to succeed.

After going undrafted, UNLV’s one-and-done big man who was the Mountain West Freshman of the Year looks like he’s headed to the G League. He’s out to prove doubters wrong.

With LeBron James now a free agent, Sexton could become the face of the franchise sooner rather than later. He was selected at No. 8, a pick Cleveland acquired when it traded Kyrie Irving to the Celtics last summer.

The Magic took the talented 7-footer at No. 6, which given their history with big men, means Bamba will be playing for the Lakers in a few years.

Brown starred at Centennial High School before heading to Oregon for one season.

His ability to play multiple positions made him attractive to the Wizards at No. 15.

He shot Villanova to the national championship, and it’s that ability to carry a team offensively that excites the Bucks excited. They took him with the 17th pick.