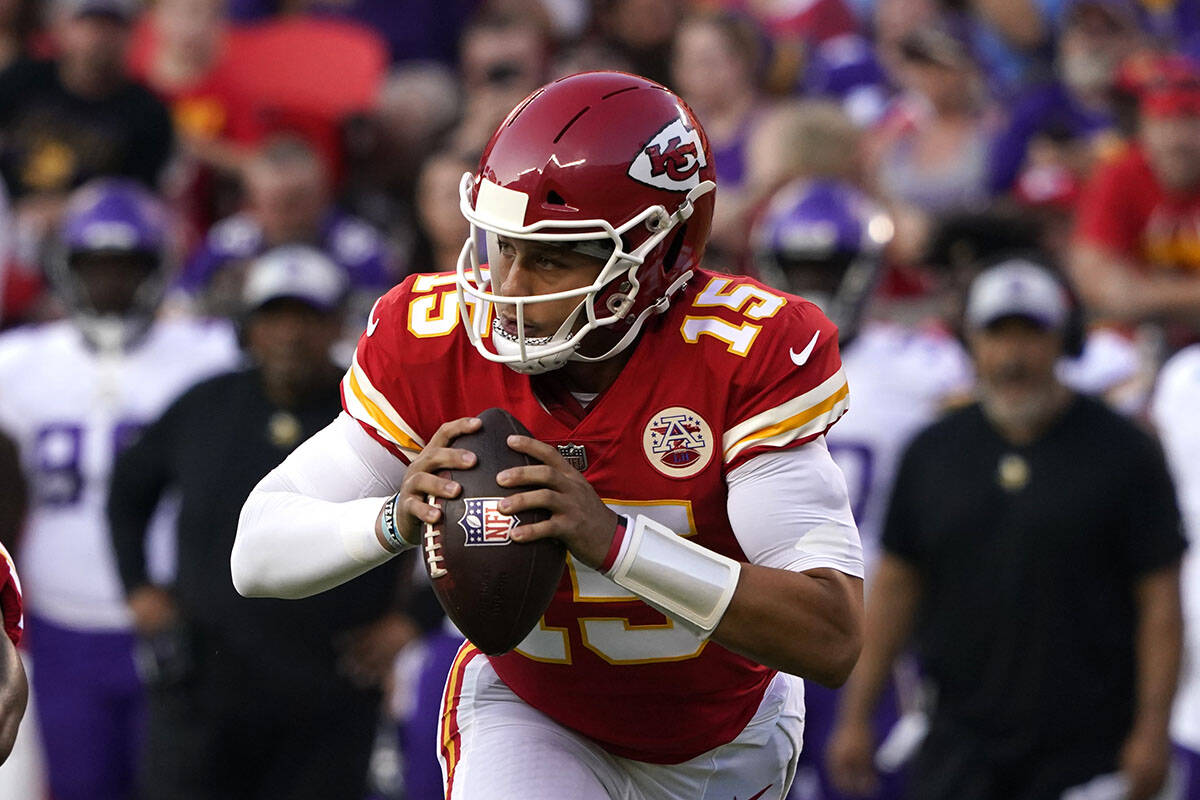 Michael “The Wizard” Kipness has been a professional handicapper since 1987. “Dr. Alan” Dumond is a two-time top-five finisher in the Westgate SuperContest.

The duo from wizardraceandsports.com analyzes all 16 AFC teams, designating each squad as a contender or a pretender.

Kansas City Chiefs: As defending Super Bowl champions in 2020, the Chiefs finished with a stellar 14-2 record and won the AFC Championship Game before losing to Tampa Bay in the Super Bowl. Quarterback Patrick Mahomes was running for his life in the Super Bowl loss to the Bucs. This spurred Kansas City to remake its entire offensive line during the offseason. The Chiefs think they have solved that problem, but they have another problem facing them this year — namely, that they’re Super Bowl losers. Since the 1993 season, there has been only one Super Bowl losing team (2018 Patriots) that has made its way back to the big game the following year. History is against them. But as long as they have coach Andy Reid and Mahomes, the Chiefs are a contender.

Los Angeles Chargers: A 7-9 record in 2020 wasn’t enough to save coach Anthony Lynn’s job. In steps new coach Brandon Staley, who was the Rams’ defensive coordinator last season. The Chargers have found their new franchise QB in Justin Herbert, who was the 2020 Offensive Rookie of the Year. They lost six games by seven points or fewer last season. Better coaching should improve that stat. I like the Chargers to improve. Contender.

Denver Broncos: Coach Vic Fangio is on the hot seat after two losing seasons. Last season the Broncos finished last in the division at 5-11 and a big part of that was their NFL-worst turnover differential of -16. QB Drew Lock was a big contributor to that stat, throwing 15 interceptions. The good news is that Lock won’t be behind center in Week 1. It will be QB Teddy Bridgewater, who takes care of the football. For that reason alone, the Broncos should improve. Also, the defense gets a big boost with stud linebacker Von Miller coming back. Contender.

Las Vegas Raiders: In 2020, coach Jon Gruden turned in an 8-8 record in the Raiders’ first season in Sin City. An 8-8 record was a pretty amazing accomplishment when you consider how bad the defense was in surrendering 30 or more points in 10 of 16 games. The Raiders also were -11 in turnover margin. New defensive coordinator Gus Bradley should help improve the defense. QB Derek Carr had his best year in 2020, and the Raiders have some good offensive weapons. But until the Raiders fix that atrocious defense, they will remain a pretender.

Tennessee Titans: The Titans finished 2020 with an 11-5 record and won their division, but they suffered an early exit from the playoffs at the hands of the Ravens. The Titans have found a great combination with QB Ryan Tannehill and stud running back Derrick Henry, who was the NFL’s 2020 rushing leader and Offensive Player of the Year. The Titans were an NFL-best +11 in turnover differential last year, so expect some regression. On defense, they signed free agent stud LB Bud Dupree, who should have an immediate impact. Coach Mike Vrabel has the arrow pointing up in Music City. Contender.

Indianapolis Colts: The Colts are coming off an 11-5 record and a wild-card playoff berth, but they suffered an early exit with a loss to the Bills. Indianapolis was +10 in turnover differential last year, so expect a bit of regression. QB Philip Rivers is retired. The Colts are pinning their hopes on resurrecting the career of QB Carson Wentz. But it’s unclear when Wentz will see the field after his latest injury. The Colts have a really good young RB in Jonathan Taylor and a very good defense led by LB Darius Leonard. Indy is a very talented, deep team that’s well coached by Frank Reich. Despite the uncertainty of who will be behind center, the Colts are a contender.

Jacksonville Jaguars: When is a 1-15 record considered a success? When you can select a QB that many are calling a generational talent with the No. 1 pick in the draft in former Clemson QB Trevor Lawrence, who has been compared to Peyton Manning. The Jags’ arrow is now pointing up for that reason alone. As an added bonus, coach Doug Marrone was given his walking papers and he was replaced by Urban Meyer, who won three college football national titles before making the jump to the NFL. The Jags will show improvement, but this team is rebuilding. Pretender.

Houston Texans: Coach Bill O’Brien was fired last season after an 0-4 start, and the Texans ended up with an ugly 4-12 record. New coach David Culley inherits a team in complete rebuilding mode. Franchise QB Deshaun Watson is unlikely to see the field this season as a member of the Texans due to his mounting legal problems and his request to be traded. Some have predicted Houston will be the first 0-17 team in NFL history. Las Vegas oddsmakers think that’s possible, as the Texans have the dubious honor of being the only NFL team to be made an underdog in all 17 of their games. Pretender.

Buffalo Bills: The Bills turned in a stellar 13-3 record and reached the AFC Championship Game before losing to the Chiefs. Buffalo put up a franchise-record 501 points and appears poised to put up big offensive numbers again this year. Coach Sean McDermott has guided the Bills to the playoffs in three of his four years in Buffalo. Hopes are high that the Bills are ready to take the next step and get to the Super Bowl for the first time since the 1993 season. The Bills are favored in 15 games. Contender.

New England Patriots: Year 1 in New England after the departure of QB Tom Brady produced a result that coach Bill Belichick and Patriots fans aren’t used to — a losing record (7-9). Last year was a transition year, and many Patriots players opted out due to COVID-19. QB Cam Newton didn’t have a very good 2020 season and was recently cut, paving the way for first-round draft pick Mac Jones to take over the QB reins. The Patriots should be slightly improved. Pretender.

Miami Dolphins: The Dolphins doubled their win total in 2020, going 10-6 after finishing 5-11 in 2019. Coach Brian Flores has Miami moving in the right direction. The Dolphins were +9 in turnover differential, so expect some regression. The big question mark going into 2021 is QB Tua Tagovailoa, who has had his fair share of struggles. QB Ryan Fitzpatrick is no longer around to come off the bench when Tua struggles, and the second-year player will be working with two new offensive coordinators in George Godsey and Eric Studesville. The uncertainty around Tua makes the Dolphins a pretender.

New York Jets: When is a 2-14 record considered a success? When you can kill two birds with one stone. The Jets were able to send Adam Gase, probably their worst coach in franchise history, and turnover-prone QB Sam Darnold packing out of the Big Apple in one fell swoop. In steps new Jets coach Robert Saleh, who was the 49ers’ defensive coordinator for the last four years, and a new coaching staff. New York selected QB Zach Wilson out of Brigham Young with the No. 2 overall draft pick. The Jets are in rebuilding mode. Pretender.

Baltimore Ravens: The Ravens went 11-5 to earn a wild-card playoff berth and QB Lamar Jackson notched his first playoff win by beating the Titans on the road before falling to the Bills in the divisional round. Jackson became the only NFL QB to rush for more than 1,000 yards in two straight seasons. The loss of RB J.K. Dobbins to a season-ending injury will hurt. But the offense will keep humming, the defense is solid and coach John Harbaugh is simply one of the best. Contender.

Pittsburgh Steelers: The Steelers started 2020 on fire, winning their first 11 games before going 1-4 down the stretch to finish 12-4. They still won the AFC North but were quickly bounced from the playoffs in a turnover-plagued loss to the Browns. Based upon what we saw down the stretch, the Steelers seem to be on everyone’s fade list. But the reports of Pittsburgh’s demise may be premature. Coach Mike Tomlin has never had a losing season. The Steelers made a shrewd move in drafting stud RB Najee Harris with their first-round draft pick. He should be an immediate impact player. The defense, led by LB T.J. Watt and defensive end Cameron Heyward, should remain solid. This is most likely QB Ben Roethlisberger’s final season. He and his teammates should be very motivated to make it a successful one. Contender.

Cincinnati Bengals: When is doubling your win total from the prior year not considered a success? When you have doubled your total from two wins to four wins. That’s only six wins in 32 games for Bengals coach Zac Taylor, who suddenly finds himself on the hot seat entering his third season in the Queen City. One piece of good news is that QB Joe Burrow had a stellar rookie year before suffering a season-ending injury in Week 11 and he’s expected back under center. If things start out bad, it wouldn’t surprise me if Taylor is the first coach fired in 2021. Pretender.

Cleveland Browns: The Browns went 11-5 in 2020 to earn a wild-card playoff spot. NFL Coach of the Year Kevin Stefanski then did what no Cleveland coach had done in 25 years — win a playoff game. I like the RB duo of Nick Chubb and Kareem Hunt, but QB Baker Mayfield is still a question mark. Can he take the next step? On defense, stud DE Myles Garrett returns, but there will be new starters on that side of the ball so we’ll have to see how well they’ll play together. The turnaround on the shores of Lake Erie is real. But I’m not ready to put the Brownies in the big game just yet. Contender. 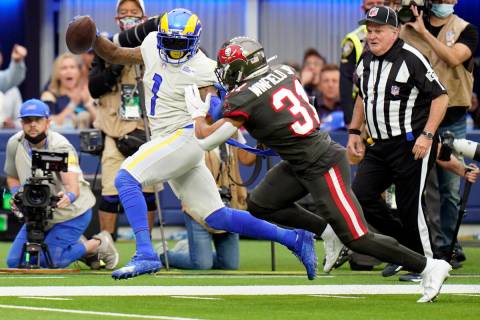 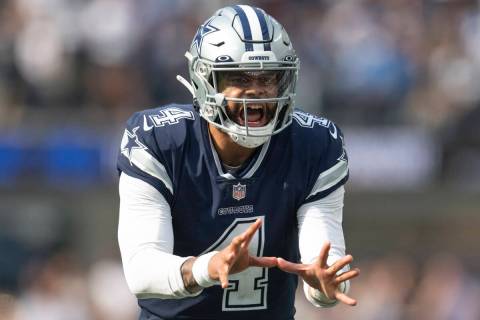