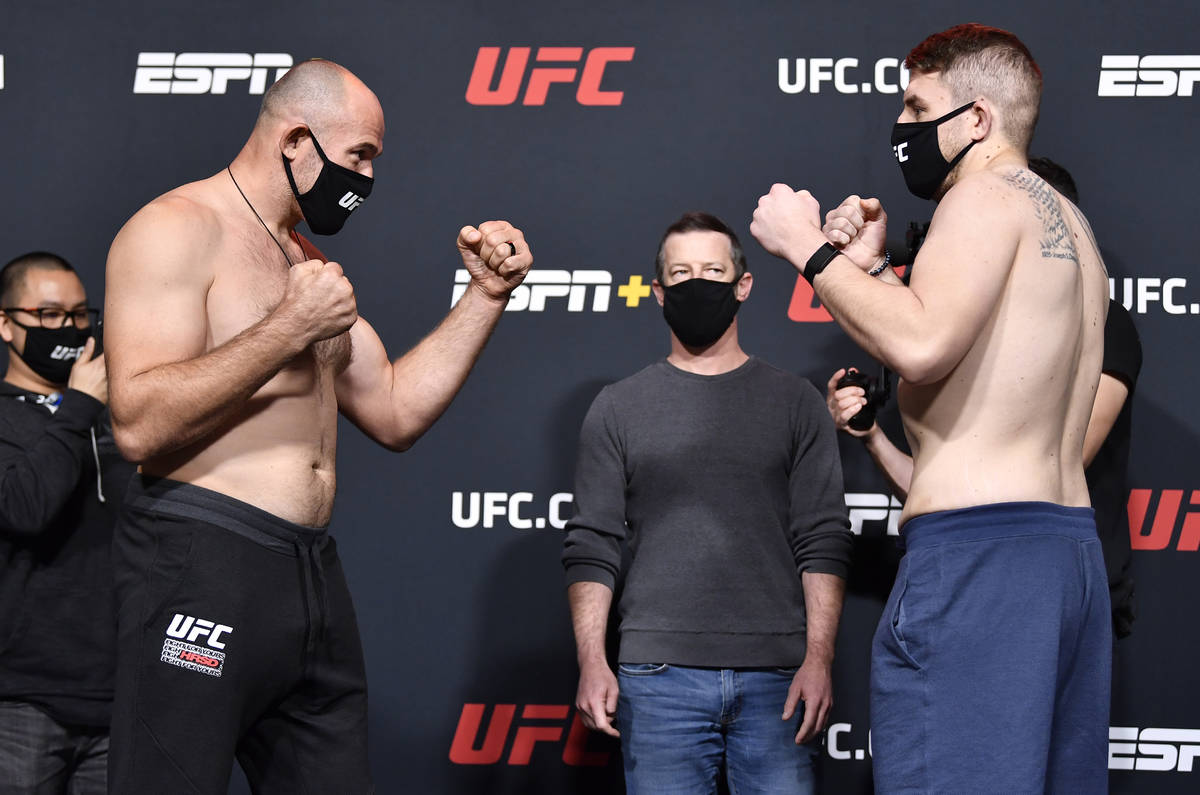 (L-R) Opponents Aleksei Oleinik of Russia and Chris Daukaus face off during the UFC weigh-in at UFC APEX on February 19, 2021 in Las Vegas, Nevada. (Photo by Chris Unger/Zuffa LLC)

Handicapper Lou Finocchiaro expects the 43-year-old Russian to notch career win No. 60 in UFC Fight Night 185 on Saturday at the UFC Apex facility in Las Vegas.

“What’s unusual is that normally Oleinik is the much smaller man,” said Finocchiaro (@GambLou). “He’s larger than Daukas, and because he has to engage, he’s further aided by the small cage they use at the Apex. Getting someone his own size is a really nice underdog position for Oleinik.

“On one hand, you’ve got a young fighter in Daukas who never has been subbed, but he’s taking a huge step up in class against a wily, beguiling, crafty veteran.”

In a featherweight fight on the main card, Finocchiaro likes Darrick Minner to upset Charles Rosa.

“Rosa has had a relatively uneven career and enters off a really emotional fight. I have a hard time figuring out why this is not a pick’em. For that reason, give me Minner (+160) all day.”

In a bantamweight bout in the prelims, Finocchiaro likes John Castaneda to defeat Eddie Wineland.

“He’s powerful, explosive, has good wrestling, and he’s hungry,” Finocchiaro said. “He lost his debut fight to a talented fighter. I really like the spot this kid comes into the fight with.

“Not only is Wineland 7 years older than him, but he still keeps a firefighter job. He had a full camp, but that’s a distraction there. Wineland has faced better fighters and has the experience advantage. But the speed, athleticism and power all go to Castaneda.”

Lewis (+400) inside the distance over Blaydes

In the main event, Finocchiaro said Curtis Blaydes (-435) will beat Derrick Lewis nine out of 10 times, but he’s not betting on him at that prohibitive price. Instead, he recommends wagering one-third of a unit on knockout artist Lewis to win inside the distance at +400 at Circa.

“The only way to bet it is recreationally,” Finocchiaro said. “Hopefully we’ll gain a little profit on these first few fights and then throw a long bomb.”