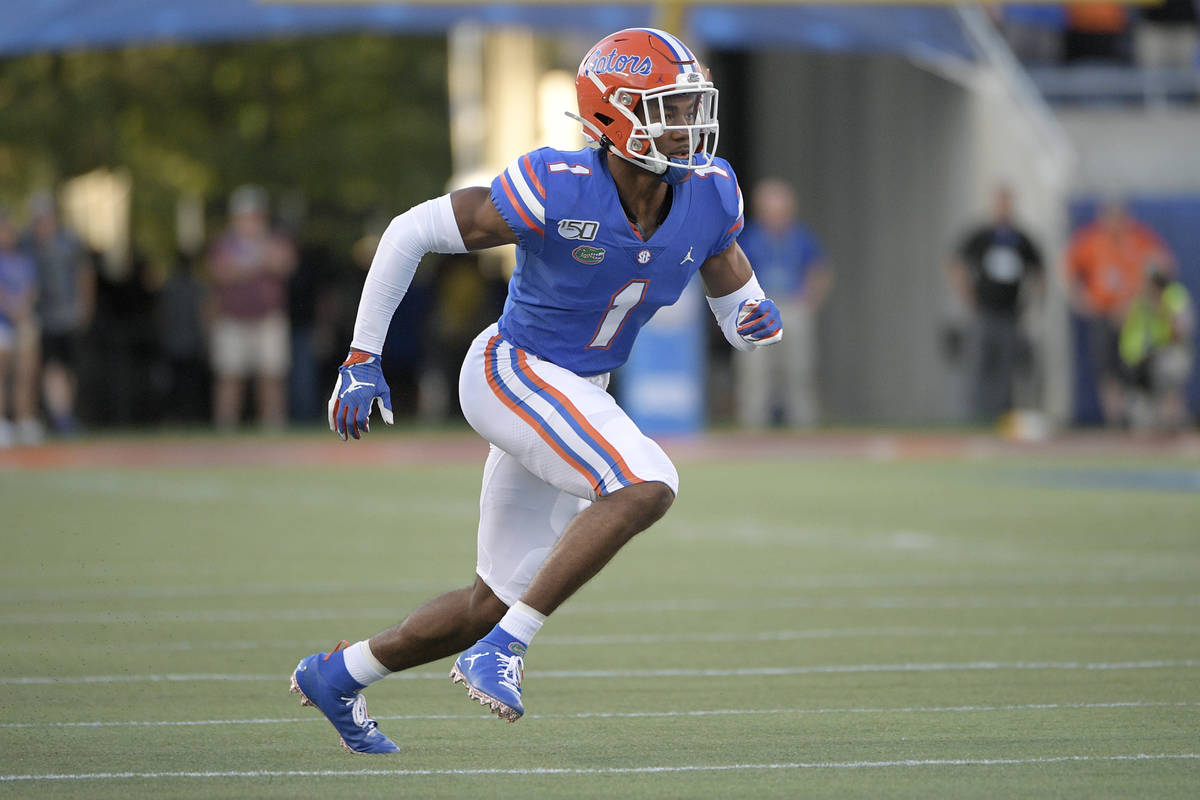 Florida defensive back CJ Henderson (1) rushes the line of scrimmage during the first half of an NCAA college football game against Miami Saturday, Aug. 24, 2019, in Orlando, Fla. (AP Photo/Phelan M. Ebenhack) 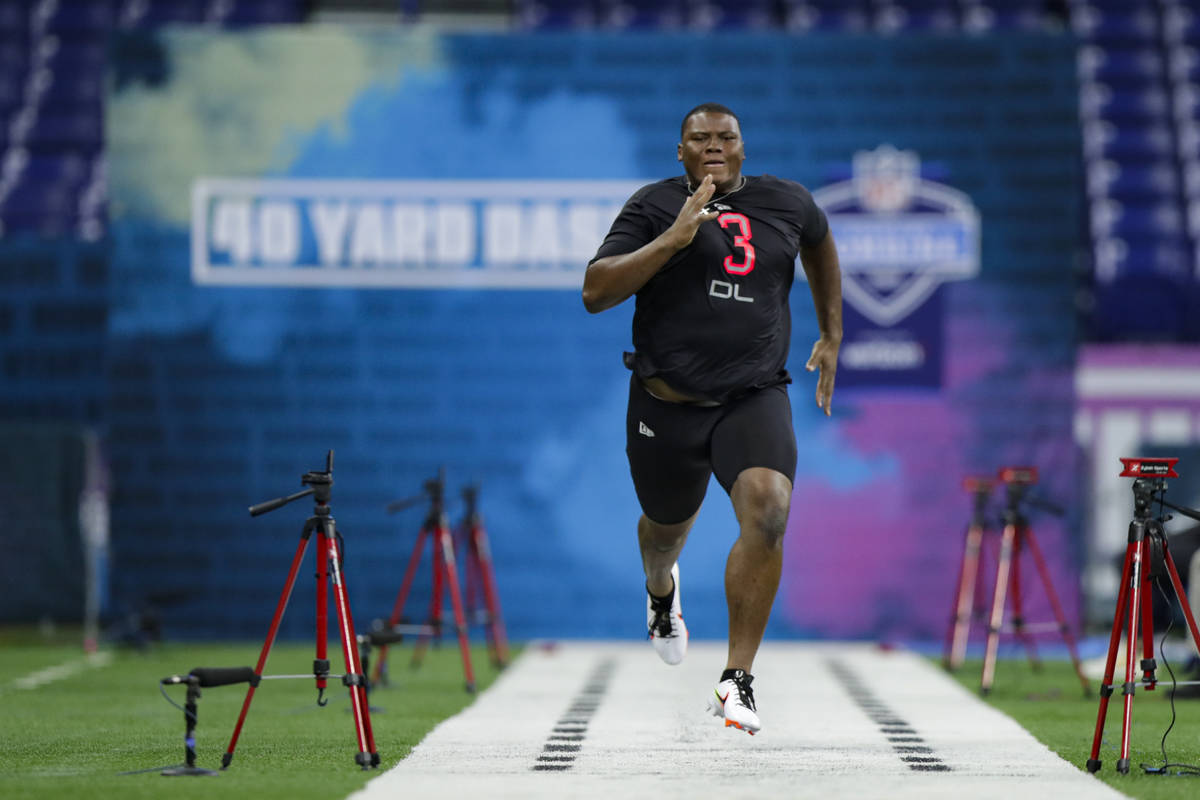 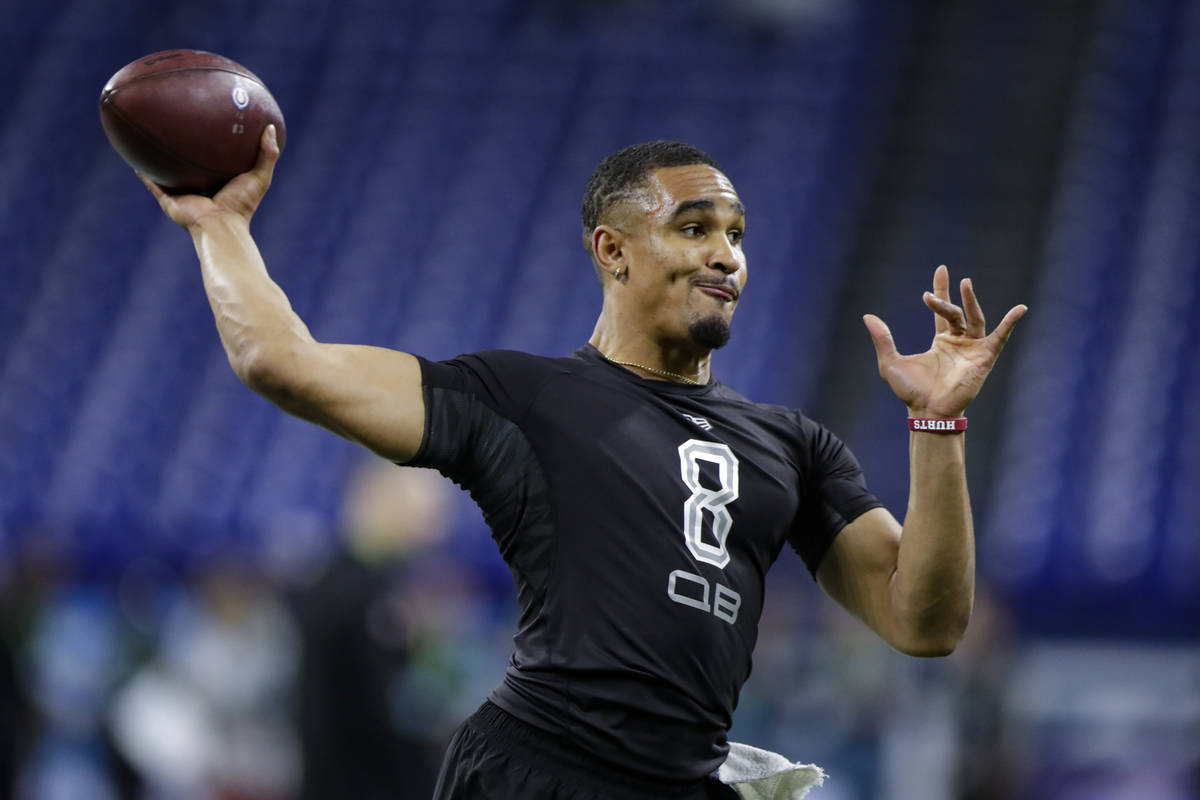 FILE - In this Feb. 27, 2020, file photo, Oklahoma quarterback Jalen Hurts runs a drill at the NFL football scouting combine in Indianapolis. Barring a move, Pittsburgh will have to wait until the middle of the second round to be on the clock at the NFL Draft. (AP Photo/Michael Conroy, File) 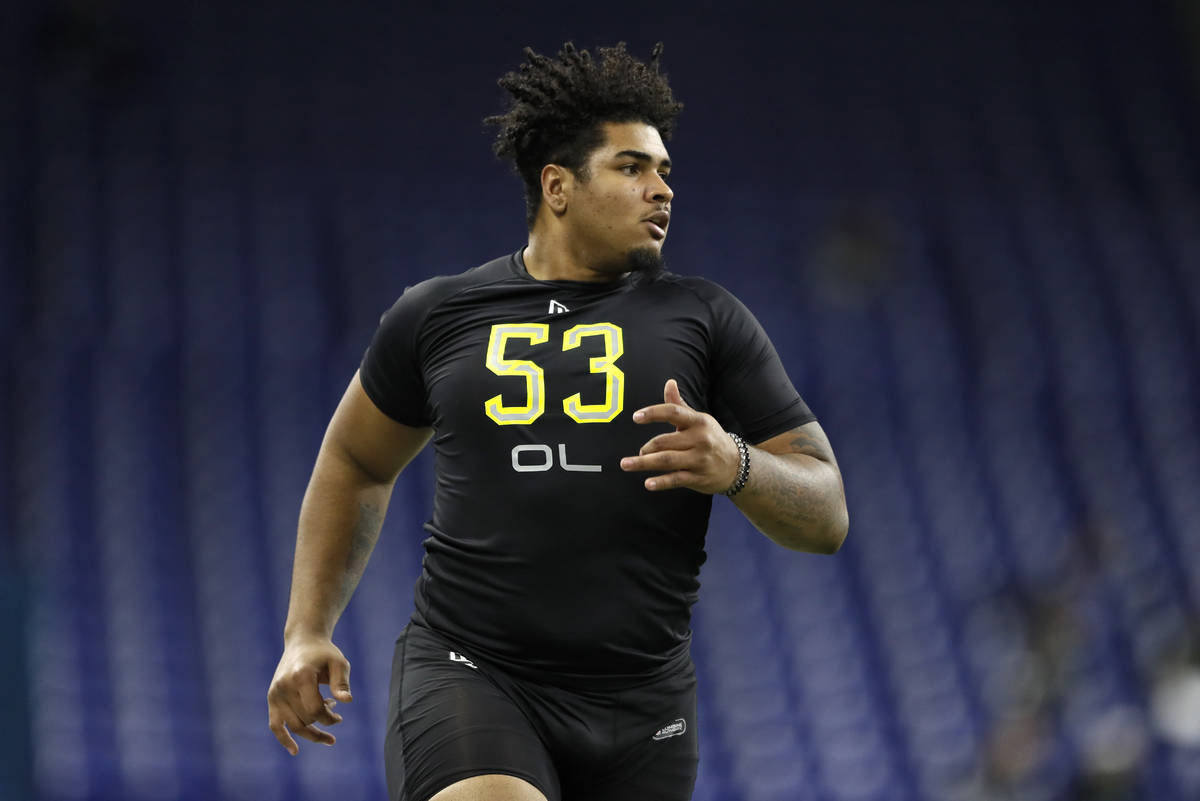 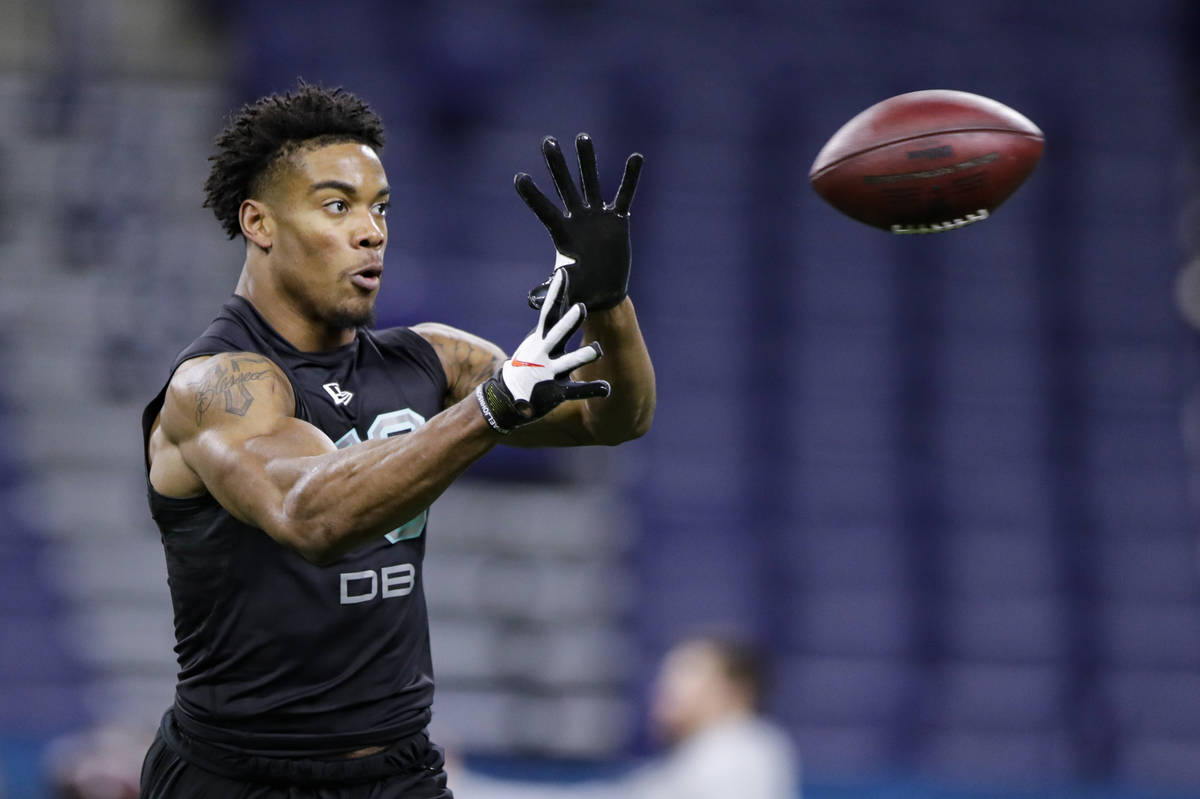 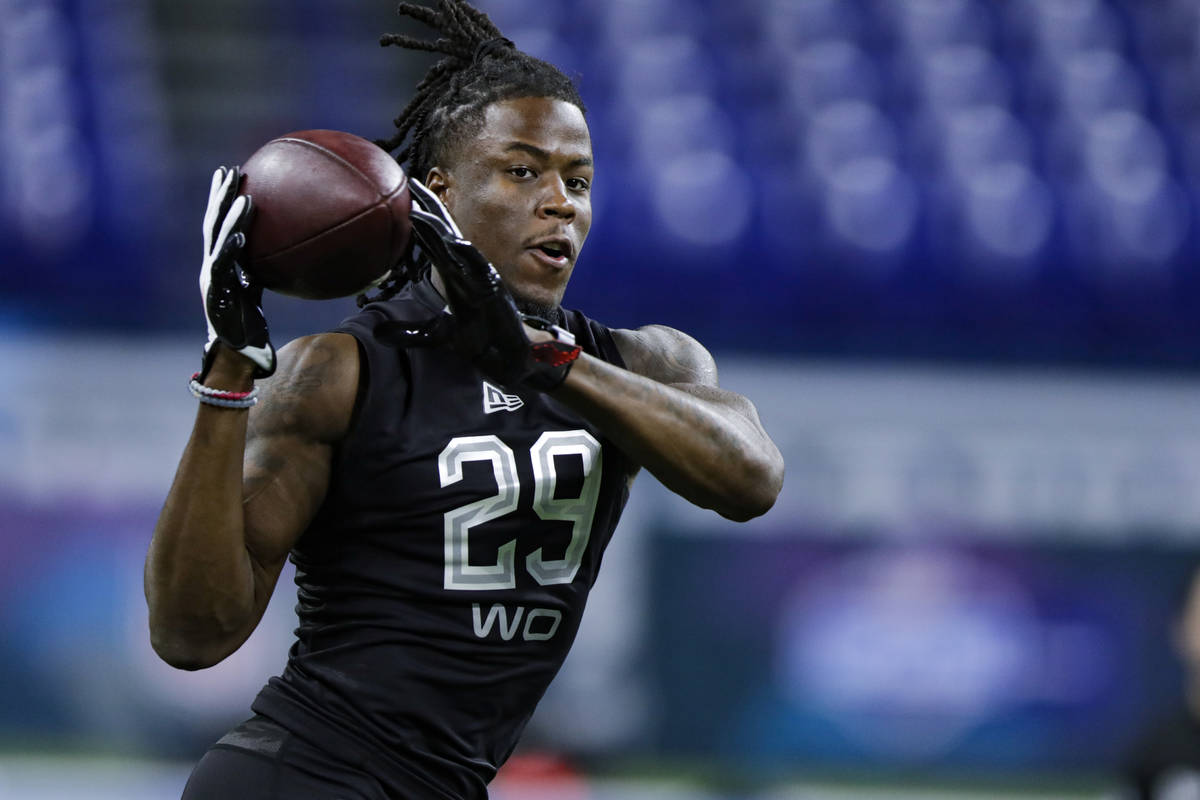 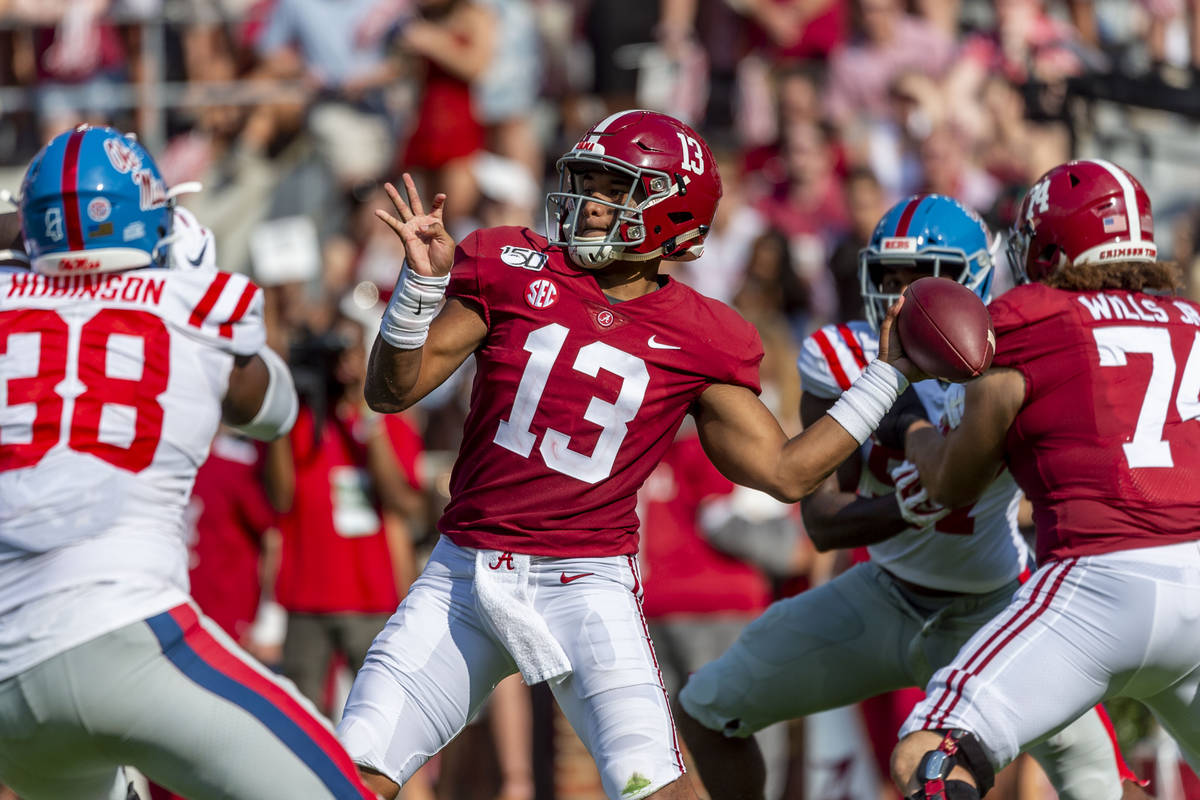 FILE - In this Sept. 28, 2019, file photo, Alabama quarterback Tua Tagovailoa (13) throws a pass during the first half of the team's NCAA college football game against Mississippi in Tuscaloosa, Ala. Tagovailoa’s agent says the quarterback is healthy and will be ready for training camp. Tagovailoa held a virtual pro day with former NFL quarterback Trent Dilfer on Thursday, April 9, after the former Alabama star’s personal pro day was canceled because of the coronavirus outbreak. Tagovailoa injured his hip on Nov. 15 and had season-ending surgery two days later. He is expected to be among the top five picks in the NFL draft later this month. (AP Photo/Vasha Hunt, File)

With the NFL draft taking center stage Thursday on an otherwise barren sports landscape, Las Vegas sportsbooks have posted a record number of props on the event.

To help bettors sort through the hundreds of wagering options, the Review-Journal asked a handful of professional sports bettors and handicappers for their best bets.

Florida cornerback C.J. Henderson has been one of the biggest climbers on draft boards. His draft position has dropped from 17½ to 14½ at William Hill, where the under has drawn 97 percent of the total money wagered.

VSiN host Mitch Moss and handicapper Ian Cameron like Henderson to go under 14½, meaning he must be drafted with one of the first 14 picks.

“There are rumblings Henderson could crack the top 12 in this draft as his stock rises over some other cornerbacks due to his tremendous athletic ability,” said Cameron (@bobano). “Good value for him to go under 14½.”

Said Moss: “Some steam on Henderson as his prop has moved to 12½ (at some books). Some reports suggest certain teams are higher on him than (Ohio State cornerback Jeff) Okudah.”

Here are Moss’ other picks:

Moss took the Auburn defensive tackle under 8½ before his number dropped to 7½ on Tuesday.

“Brown could go as high as 3 to the Lions; 8½ is now either heavily juiced to the under or it has moved to 7½. Good number,” he said.

“Looks like Diggs is a late first rounder, which means ’Bama should have at least six players drafted in the first 32 picks,” Moss said.

Here are Cameron’s other picks:

“The former Alabama and Oklahoma quarterback is being undervalued here in a sport where having mobile QBs matters more and more,” he said. “He will be a project QB, but to me, there is a good chance at least one team will look at Hurts in the early-to-middle portion of the second round.”

“This prop should be priced closer to even money than it is,” he said. “The only RB that I see going in the late first round, perhaps to a team like Miami at No. 26, is D’Andre Swift from Georgia. I think it is worth a shot to bet the (under) here at a very attractive plus price.”

“Wirfs has size, strength, quick feet and explosive speed,” said White (KennyWhiteSports.com). “But most importantly, he learned the art of being a great offensive lineman under the tutelage of (Iowa coach) Kirk Ferentz.”

“Jeremy Chinn’s combine numbers were off the charts,” White said.

“Swift is the best running back in the draft, and everything I’m reading, teams that need a running back seem to favor Dobbins more than Helaire,” Whitelaw said.

“Jeudy’s the best receiver, and either the Jets or Raiders will take him at 11 or 12,” he said.

Will Tua Tagovailoa be drafted in first six picks? Yes (-230)

“Tua’s really special. I know he has some injuries, but I just think somebody will either take him or trade up to get him if he’s available,” Whitelaw said.

“There were six (first-round trades) last year,” Whitelaw said. “That’s a lot of trades to begin with. I think there will be less just because it’s a little more complicated with the technology and everything. And teams won’t absolutely have to get a certain guy. In years past, they’d work these guys out and trade up and make sure they got their guy. But they’re not 100 percent sure now.”