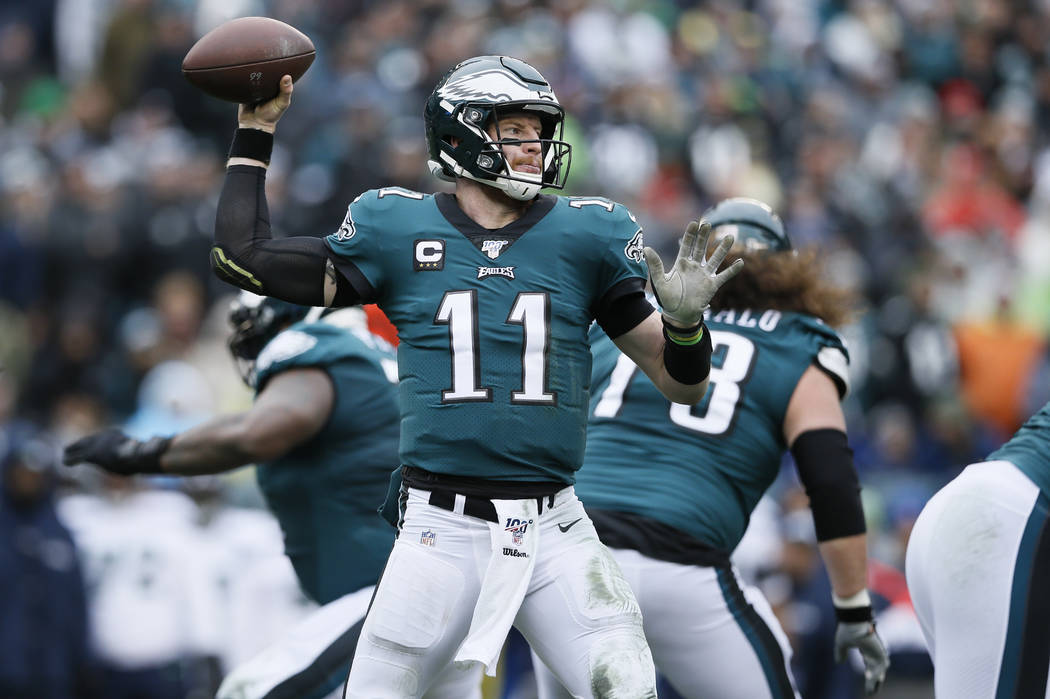 Philadelphia Eagles' Carson Wentz passes during the first half of an NFL football game against the Seattle Seahawks, Sunday, Nov. 24, 2019, in Philadelphia. (AP Photo/Michael Perez)

The NFC East is the NFL’s only division in which all four teams have won the Super Bowl.

That’s good news for Philadelphia in the sense that, despite a 5-7 record and three-game losing streak, it still has a solid shot to win the NFC East.

The Eagles can tie the Cowboys with a win over the Giants on “Monday Night Football” and host Dallas on Dec. 22. Philadelphia’s other two games are at Washington in Week 15 and at New York in Week 17.

The Eagles are consensus 9½-point home favorites over the Giants and there are multiple 9s at Las Vegas sportsbooks.

The line opened at 8 and moved when Eli Manning was named New York’s starting quarterback in place of Daniel Jones, who’s out with a sprained ankle.

The betting public has slight leans to the Eagles and under the total, with is at 45 after opening at 47, according to Jeff Davis, Caesars Entertainment director of trading.

“The best result for us is the Eagles win but don’t cover,” Davis said.

Philadelphia has won nine of the last 10 meetings (5-5 ATS) and “Monday Night Football” favorites are 13-1 straight up this season and 10-4 ATS.

The under is 26-16 in prime-time games this season.