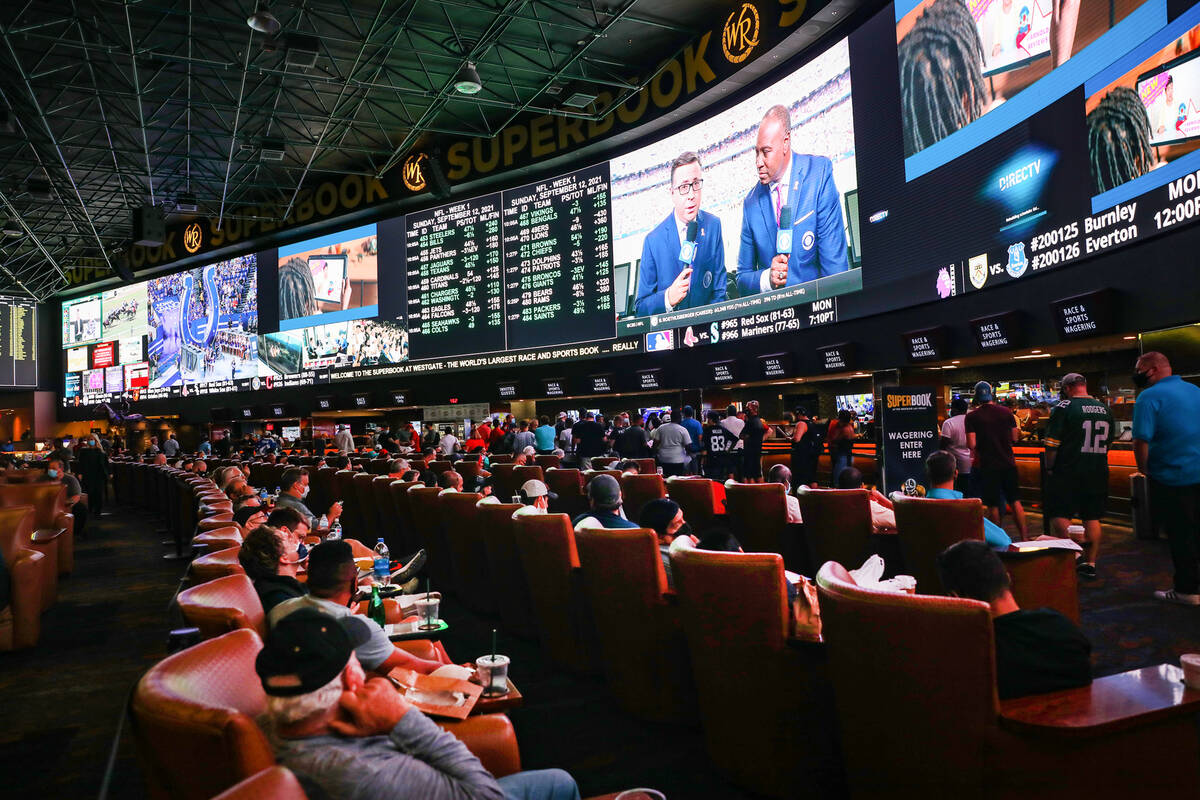 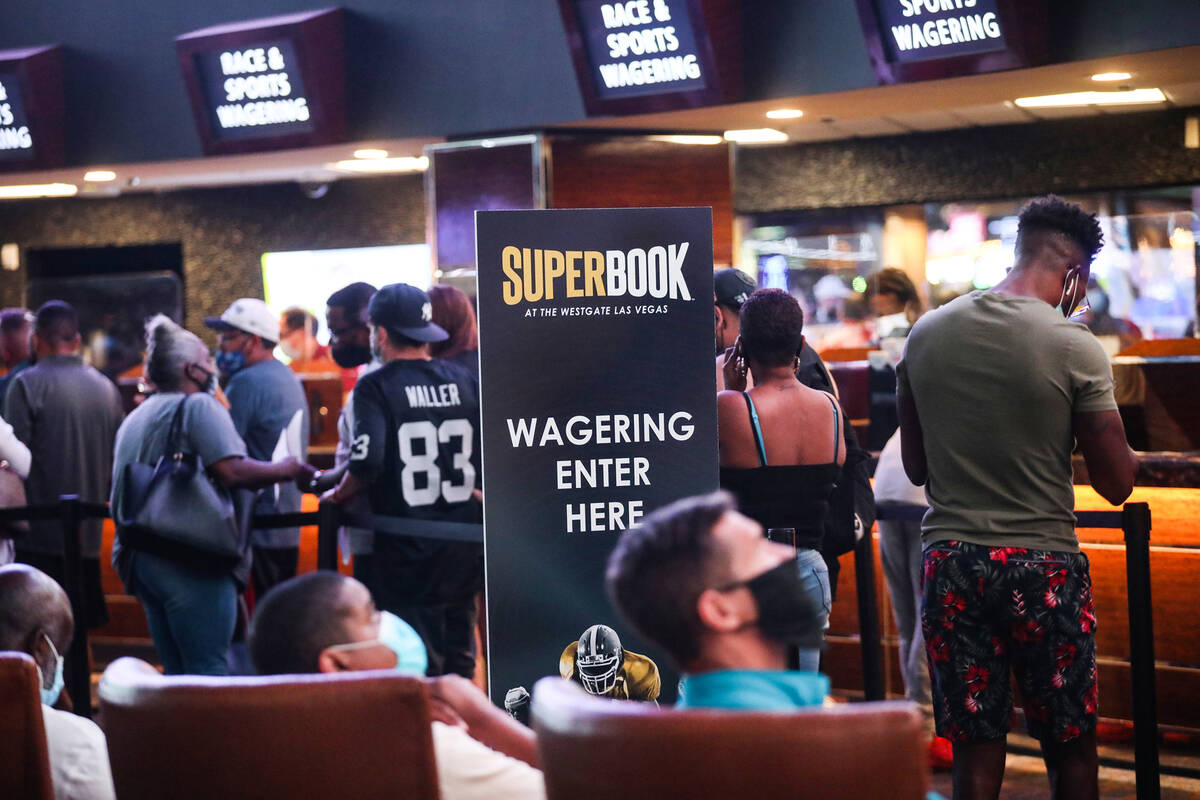 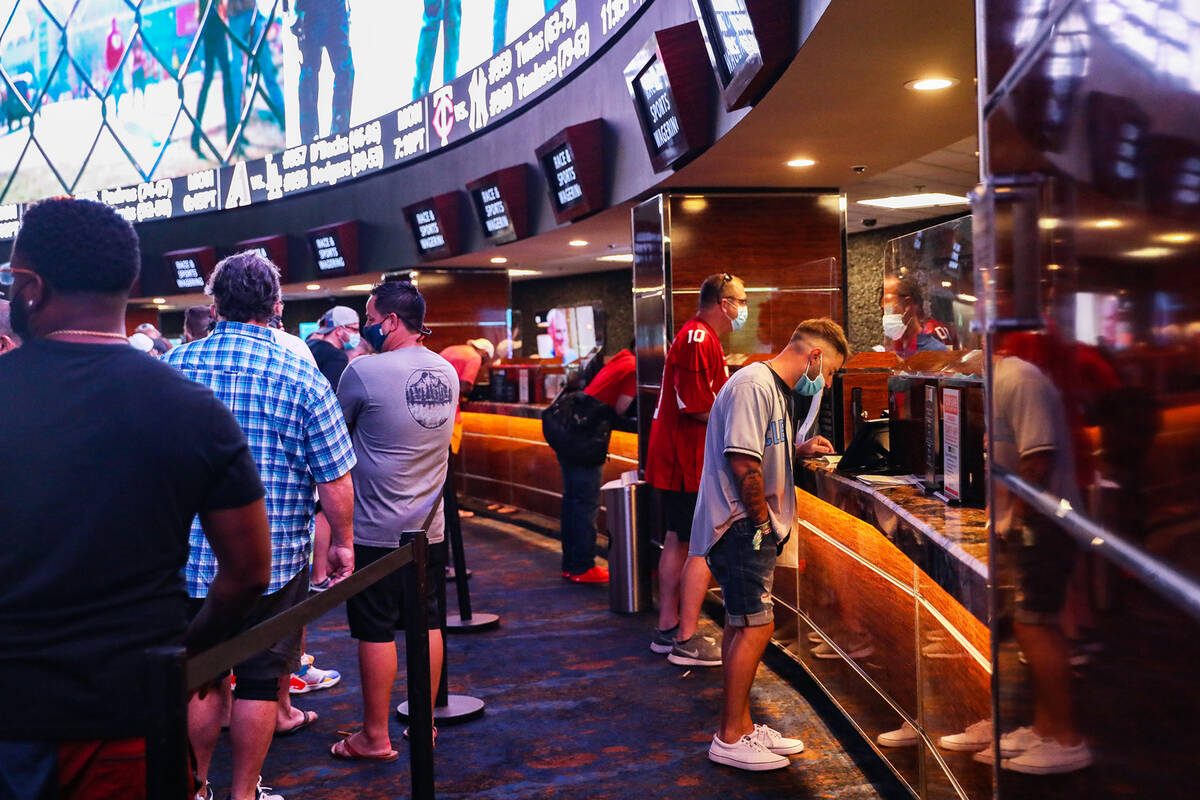 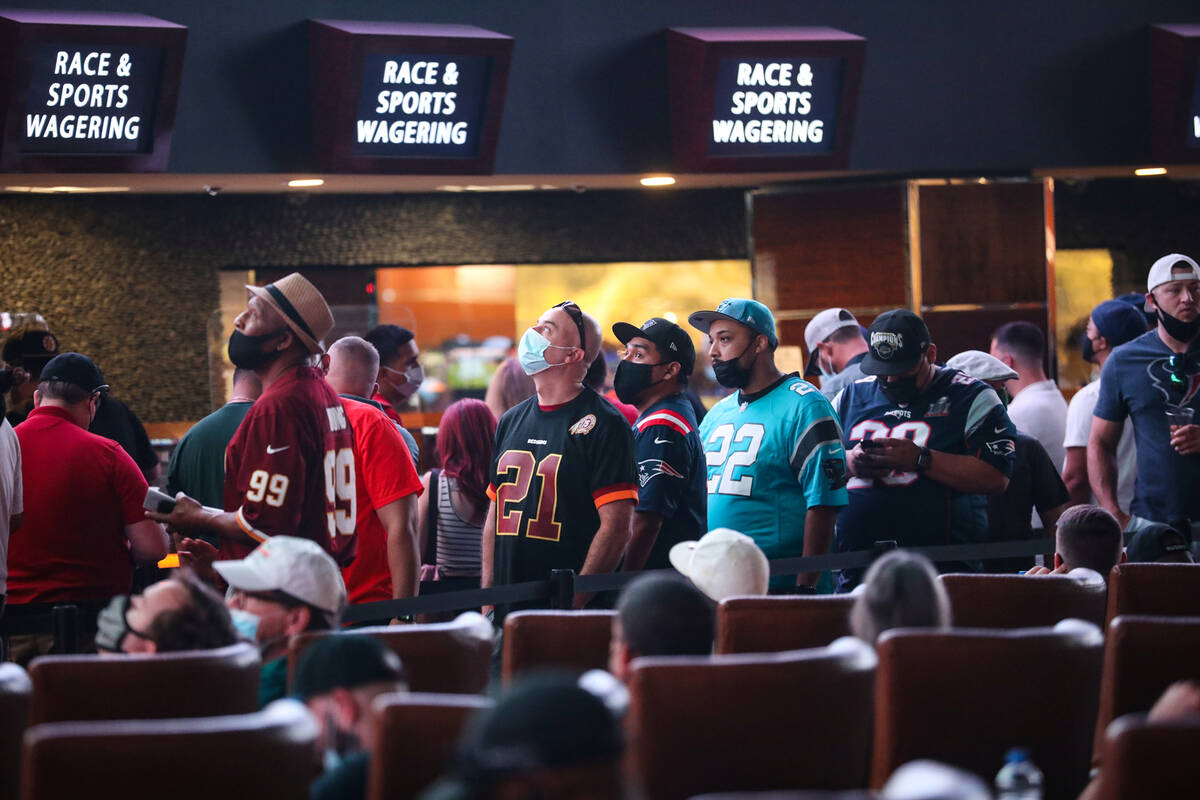 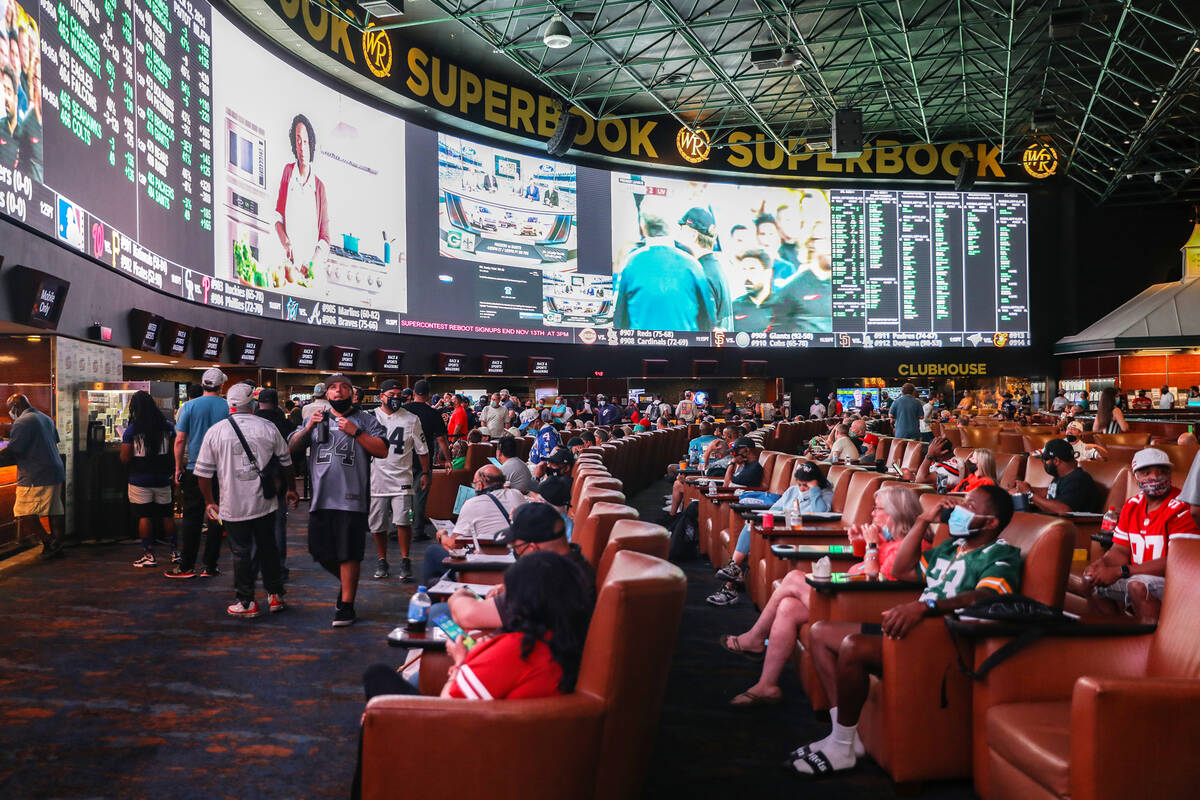 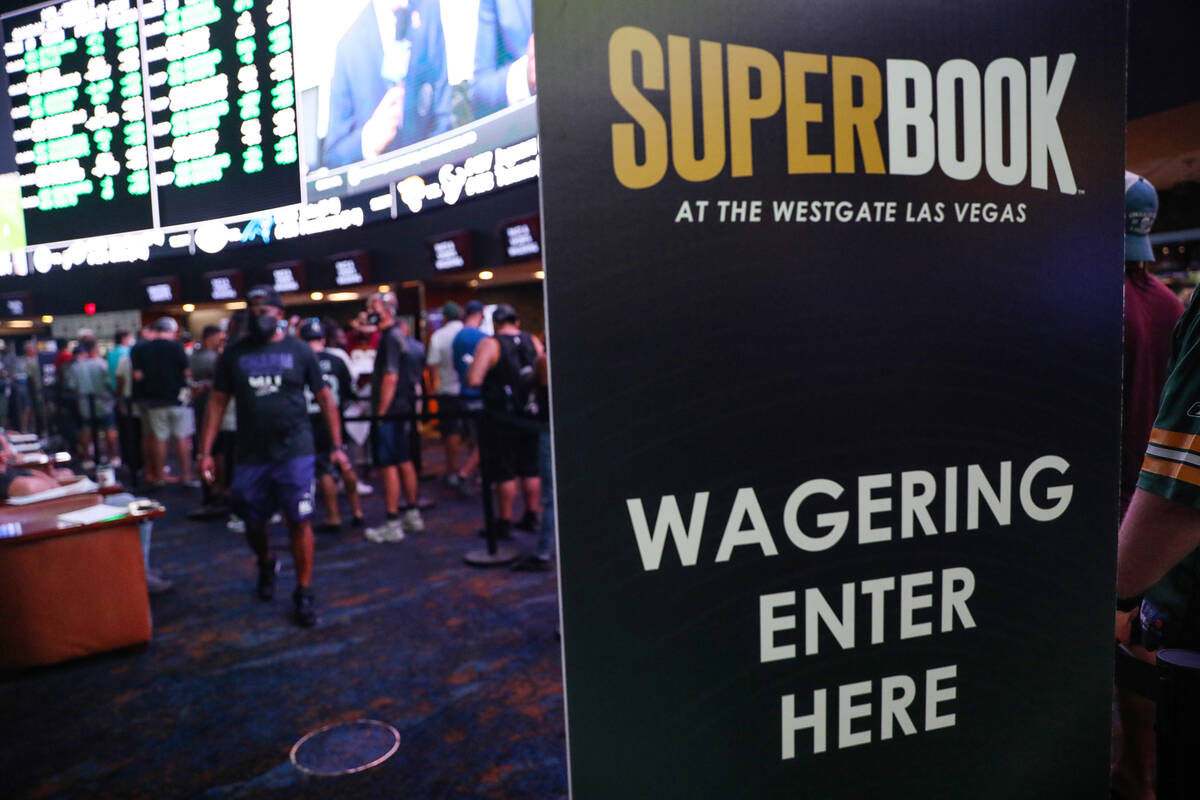 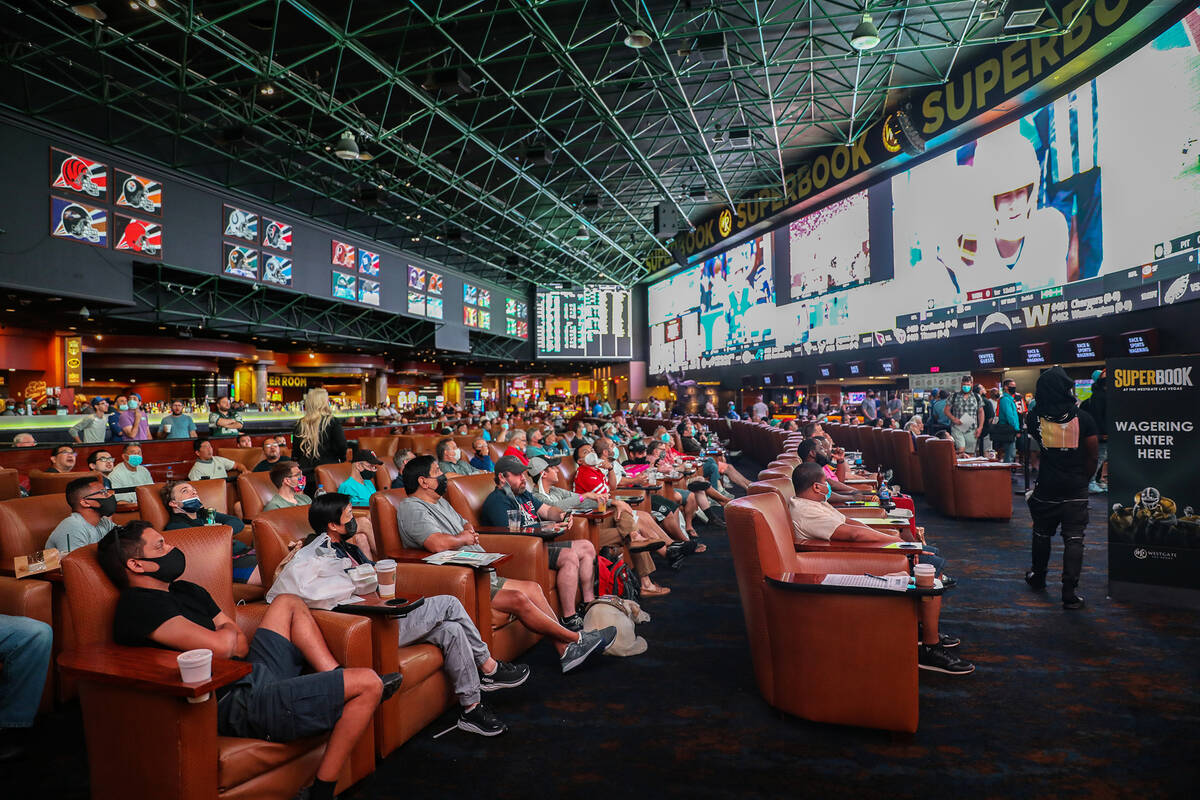 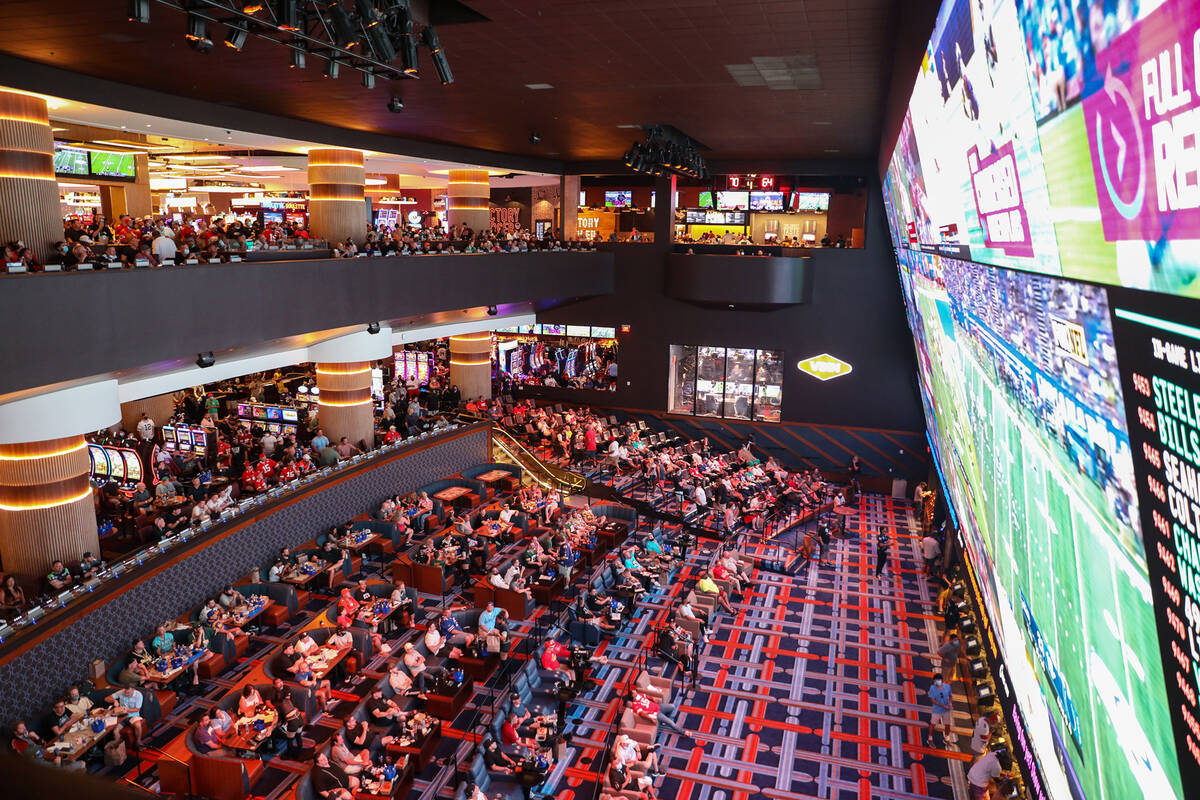 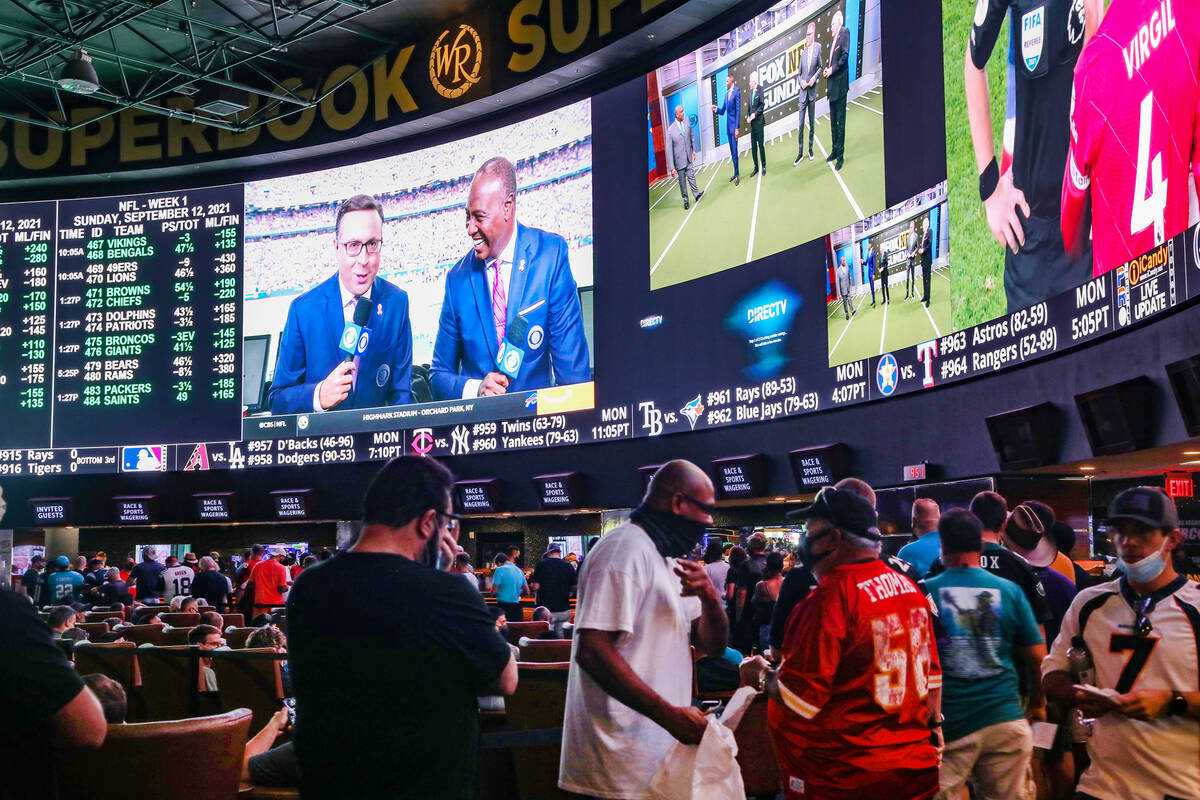 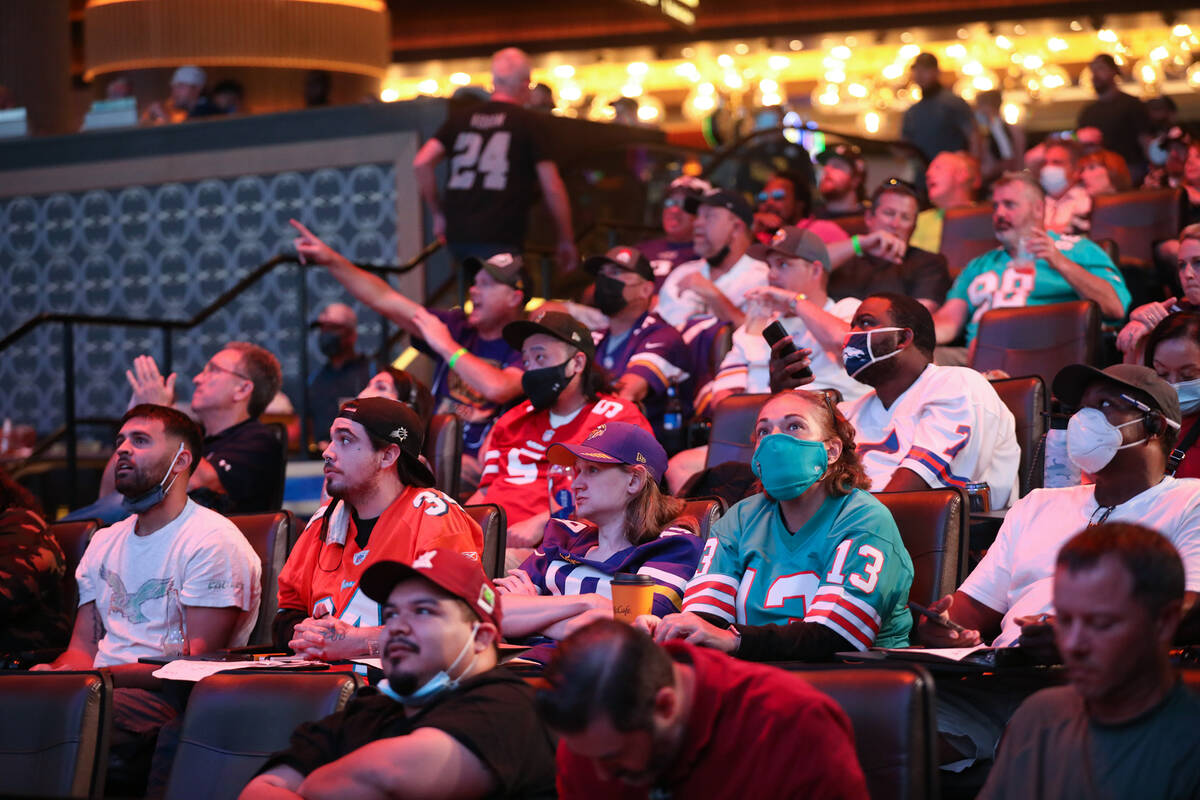 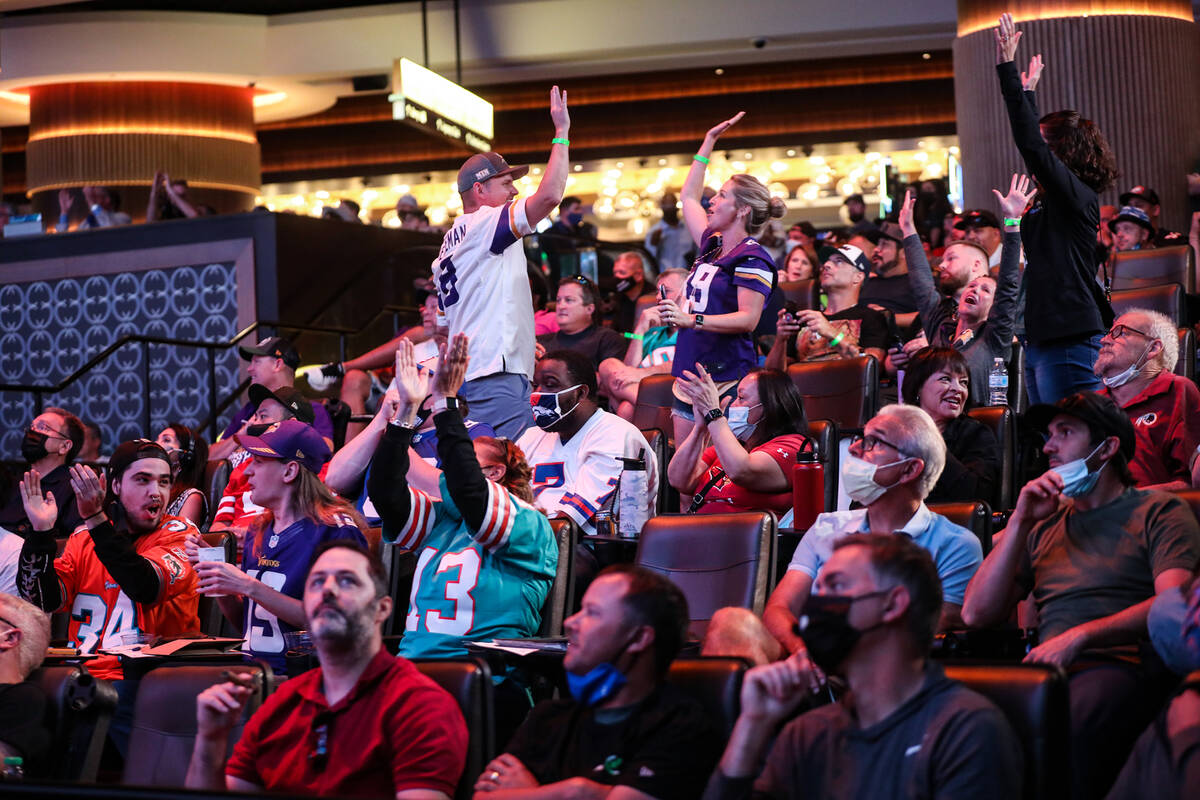 Guests react to a play while watching the Pittsburgh Steelers against the Buffalo Bills at the Sportsbook at Circa in Las Vegas, Sunday, Sept. 12, 2021. (Rachel Aston/Las Vegas Review-Journal) @rookie__rae 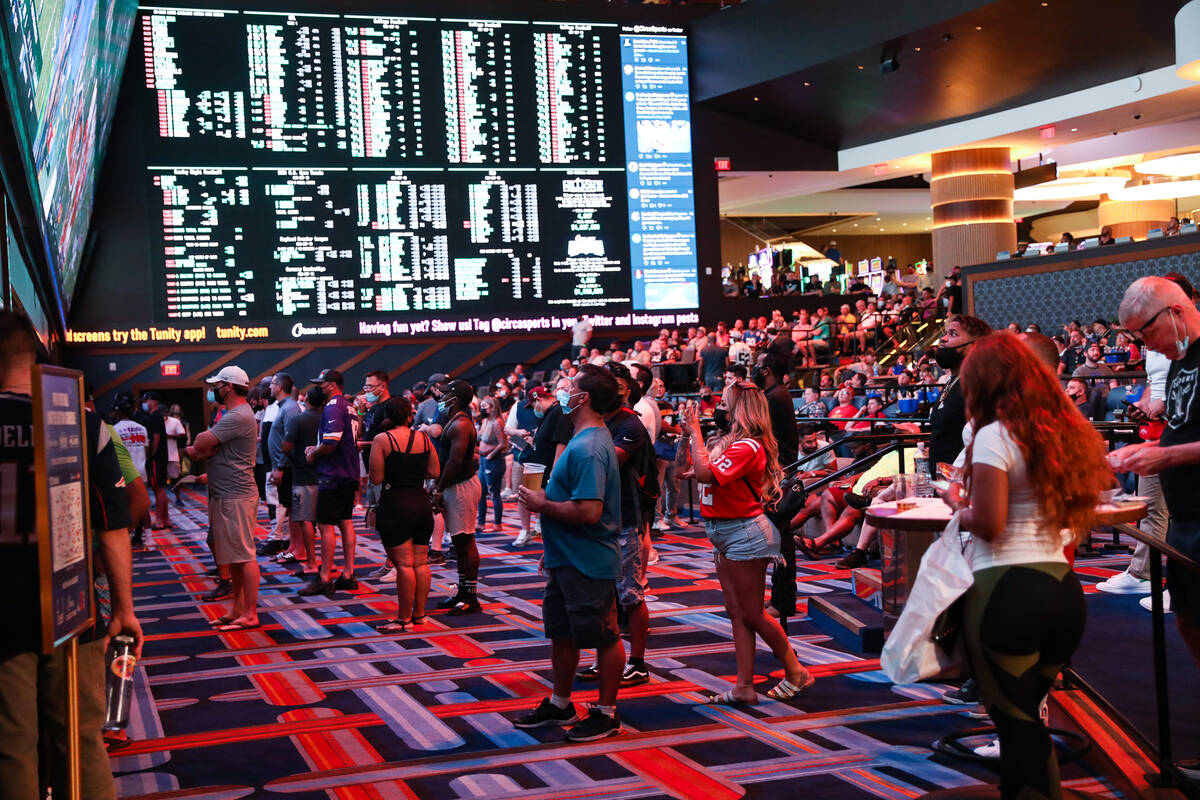 Guests watch the game as they wait to place their bets at the Sportsbook at Circa in Las Vegas, Sunday, Sept. 12, 2021. (Rachel Aston/Las Vegas Review-Journal) @rookie__rae 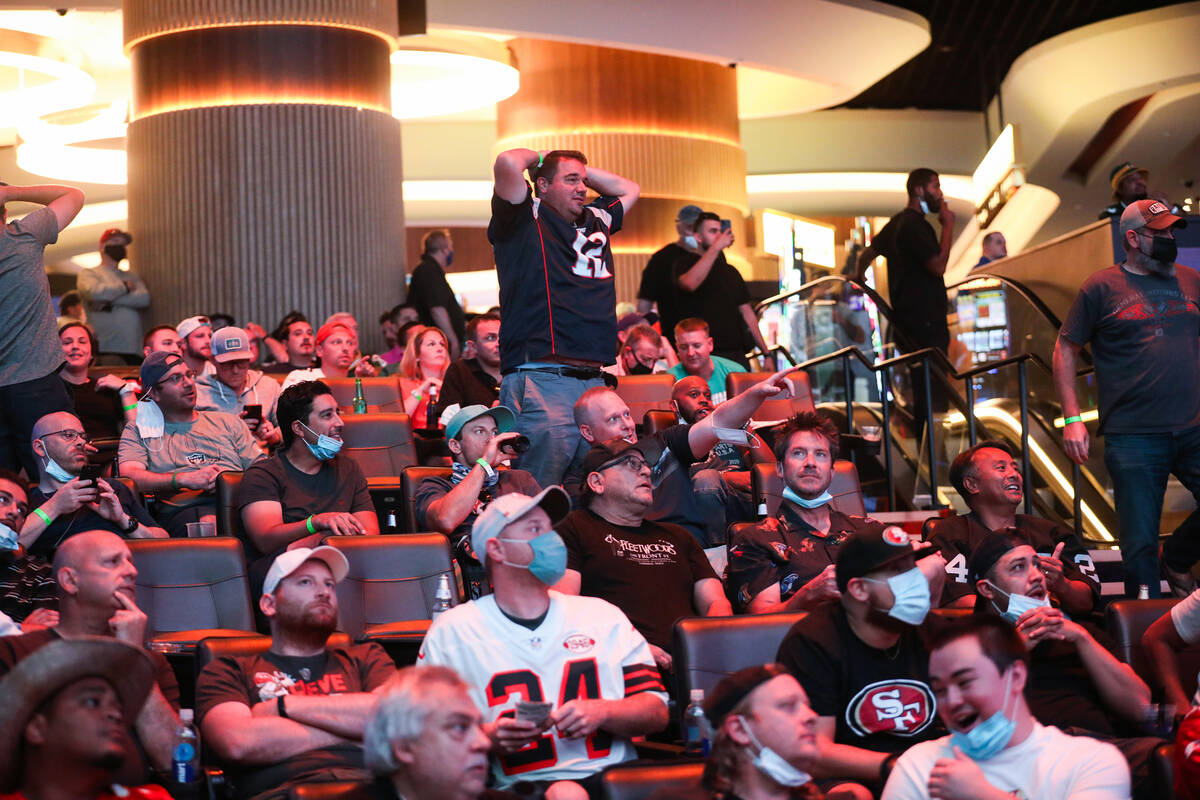 A year after the coronavirus pandemic restricted the capacity and curbed the enthusiasm at Las Vegas sportsbooks, bettors returned en masse on the opening Sunday of the 2021 NFL regular season.

Long lines of gamblers clad in colorful NFL gear stretched from the books to the casino floors in the hour before the 10 a.m. kickoff.

“At 9 a.m., the levee broke and the book was slammed and remained that way all day,” Westgate SuperBook vice president Jay Kornegay said. “There was no doubt the numbers and energy easily surpassed last year.

“Americans love watching football and they certainly enjoy wagering on it. Final grade: A+.”

Before the games began on the day after the 20th anniversary of 9-11, tears flowed in the books during an emotional national anthem sung by Juliette Candela from the site of the 9/11 memorial.

“Even the sportsbook erupted in cheers after that anthem,” South Point sportsbook director Chris Andrews posted on Twitter.

The tears quickly turned to cheers as the crowd at Red Rock Resort roared when Bills receiver Isaiah McKenzie returned the opening kickoff 75 yards against the Steelers.

The roars grew louder as Pittsburgh erased a 10-0 deficit en route to a 23-16 upset win over Buffalo as a 6½-point underdog.

“One of the louder opening days in pro football that I can remember,” Red Rock Resort sportsbook director Chuck Esposito said. “Great energy and atmosphere. Everyone was super excited that football is back.”

Houston resident John McCord traveled to Las Vegas to bet on football at the SuperBook.

“I’ve been coming here steady for 15 years,” he said. “I think it’s back to normal, like it was before the pandemic. It’s pretty exciting.

“People are energized, and it looks like people are having a good time and not worrying too much about the pandemic.”

Bob Porreca, 67, drove from Huntington Beach, California, to Las Vegas to attend the Raiders-Ravens game with his son-in-law Monday night at Allegiant Stadium. He spent Sunday at Red Rock Resort, where he takes several trips during the NFL season to bet on games.

“It’s not anything like last year. They were taking your temperature, and I think a lot of people were more frightened about COVID,” he said. “People have kind of gotten used to it now. They do have safeguards in place. They make you wear a mask whether you’re vaccinated or not.

“I feel pretty comfortable, even gaming at the tables (Saturday) night, that Vegas will remain open. It’s pretty normal.”

Ron Russeau, 40, moved to Las Vegas from the Detroit area three years ago and was one of the few patrons at Red Rock rooting for the Lions, who covered as 9½-point underdogs to the 49ers after rallying from a 38-10 deficit in a 41-33 loss.

“Finally, football’s back,” he said. “It feels more alive than last year. Everyone just wants to come out and enjoy their lives again and check out all the games.”