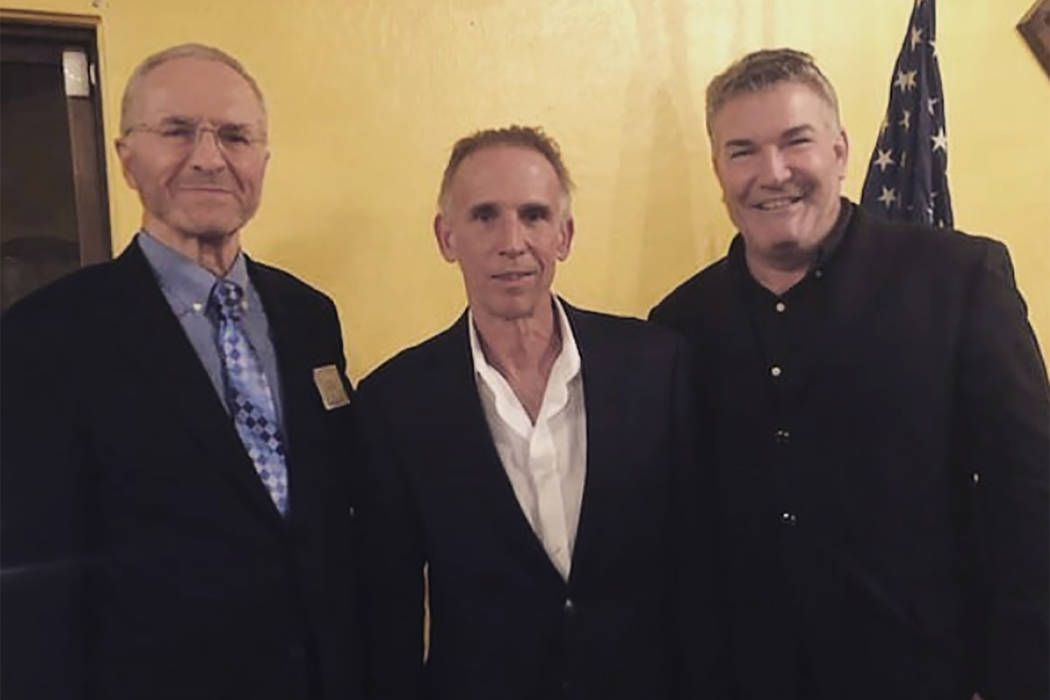 From left to right, Ed Thorp, Anthony Curtis and Don Johnson are shown recently at the 24th annual Blackjack Ball on the Strip. (Anthony Curtis)

At a secure location in the shadow of the Strip that’s a closely guarded secret, more than 100 of the world’s greatest gamblers gathered recently for Max Rubin’s 24th annual Blackjack Ball.

A handful of billionaires were among the invited guests at the exclusive event who socialized, voted for the Blackjack Hall of Fame and competed for the title of “World’s Greatest Blackjack Player.”

The competition, preceded by a charitable Calcutta auction of contestants, commenced with a complex quiz of 21 gambling-related questions.

The after-party took place at Rubin’s home, where some of the most successful gamblers of all time swapped stories until the wee hours and planned their next blackjack attack on a casino.

Here’s a look at some of the prominent players who attended the event.

The philanthropist is one of the wealthiest gamblers ever, along with fellow guest Zeljko Ranogajec from Australia.

Benter, 62, won almost $1 billion betting on horse racing in Hong Kong, where he developed a wildly successful algorithm that essentially cracked the code of the sport of kings.

But, like most of the guests, the Pittsburgh native got his start as a card counter and professional blackjack player. Benter left college and his physics studies behind in 1979 and boarded a bus for Las Vegas, where he played low stakes at the El Cortez and other downtown casinos before eventually joining a card counting team and turning pro.

Benter and countless others were inspired to pursue careers as pro gamblers by Thorp, a former Massachusetts Institute of Technology math professor who wrote the book on card counting in 1962’s “Beat The Dealer.”

Thorp’s best seller mathematically proved that the house advantage in blackjack could be overcome by card counting, which, simply put, is keeping a running tally of the number of high cards and low cards that have been played. When the deck is filled with big cards, the player has the edge and bets accordingly.

“After his book came out, blackjack exploded across Las Vegas because people thought they could win. But it’s not that easy,” said Rubin, originator of the Blackjack Hall of Fame and Blackjack Ball and an exclusive game protection consultant for Barona Casino in San Diego.

“Card counting is not a simple thing. Casinos aren’t just handing out money. They’re not banks. But the smartest of the smart can do it. That’s the beauty of the game.”

Thorp, 87, has a Ph.D in math and created the first wearable computer. He’s also a legendary investor who made his fortune — estimated at $800 million — on Wall Street. Thorp’s investments averaged 20 percent annual return over 30 years, according to Forbes.

Chang was the inspiration for Kevin Spacey’s character in the movie “21.” The film was based on the book “Bringing Down the House,” which chronicled the true story of the MIT Blackjack Team — of which Chang was a player and manager in the 1980s and 1990s.

“The book got about half of it right, and the movie got rid of that half,” Chang said with a chuckle. “It’s pretty funny that it’s become a part of American culture.”

Johnson beat Atlantic City casinos out of $15 million during a six-month stretch at the blackjack tables in 2011.

In the wake of the financial crisis of 2008, casinos were looking for high rollers and invited Johnson to play blackjack for up to $100,000 a hand. He negotiated several changes to gain a mathematical edge, including a 20 percent rebate from casinos on losses exceeding $500,000.

“Nobody really lets me play anymore,” Johnson said with a smile. “I stick with the horse racing industry.”

The winner of the Blackjack Ball competition is presented a massive bottle of champagne, aka a Methuselah, dubbed the Grosjean Cup.

The award is named in honor of the man considered by his peers to be the world’s best blackjack player.

“James Grosjean is the greatest player in the history of blackjack,” said Rubin, 72. “He’s so far beyond anybody else. He just knows more about cards than anyone who’s ever lived.”

After the Harvard graduate and computer programmer won the competition three times, Rubin told him he could no longer compete and put his name on the trophy.

“Finally I had to tell him, like the casinos tell us, ‘Sir, your game’s too good. You have to leave,’” he said.

Grosjean, 50, wrote a highly regarded and sought-after book, “Beyond Counting,” that details advantage play in blackjack and other casino games such as three-card poker and Caribbean stud.

“If it’s dealt with cards, there’s a way to beat it,” Grosjean said.

He estimates there are fewer than 50 people in the world who make a living the way he does — by beating casino table games.

“If you qualify it by doing it for more than 10 years and in more than a handful of casinos, there are far fewer than 50,” Chang said.

Grosjean has successfully sued casinos for illegal detention and defamation of character for being wrongly accused of cheating.

For the record, card counting isn’t cheating. It’s a legal strategy in Nevada and the rest of the country. But it’s also legal for casinos to ban card counters from playing blackjack on their tables.

Grosjean still contributes questions to the Blackjack Ball quiz and looks forward to attending the event every year.

“I only come to Vegas twice a year, and this is one of the two times,” he said.

Curtis, 62, was voted in as the 25th member of the Blackjack Hall of Fame, located at Barona.

The casino awards each member lifetime comps for room, food and beverage in exchange for them agreeing never to play there.

Curtis was a pro blackjack player before he started the Las Vegas Advisor newsletter and website and Huntington Press, which publishes books about gambling.

The Michigan native has published books by nine Blackjack Hall of Famers, including himself.

“It’s kind of a confirmation of what I decided to do,” Curtis said. “My father was a university professor, and I dropped out of college to come to Vegas and play blackjack.”

A former wrestler at Duke and UCLA, Curtis moved to Las Vegas in 1979 and played for a parallel group to the MIT team.

“I never did get a degree. I turned 21 and came here,” he said. “I wanted to get on the streets and play because I’d been studying gambling more than my college courses.

“I worked it until I was able to count through a deck in 11 seconds.”

Snyder, aka “The Bishop,” won the Grosjean Cup to claim the title of “World’s Greatest Blackjack Player.” He has authored about a dozen books on blackjack and is the longtime editor of Blackjack Forum.

“I’ve been coming to these things for more than 20 years, and it’s the first time I’ve won,” he said. “This is one of the highlights of the year. There’s a real camaraderie with the people here.”

Snyder lives in Las Vegas but no longer plays professionally.

“A lot of people here probably don’t play blackjack much in Las Vegas because you get known here,” he said. “Vegas becomes a small town pretty quick, especially when you’re playing at high stakes.”