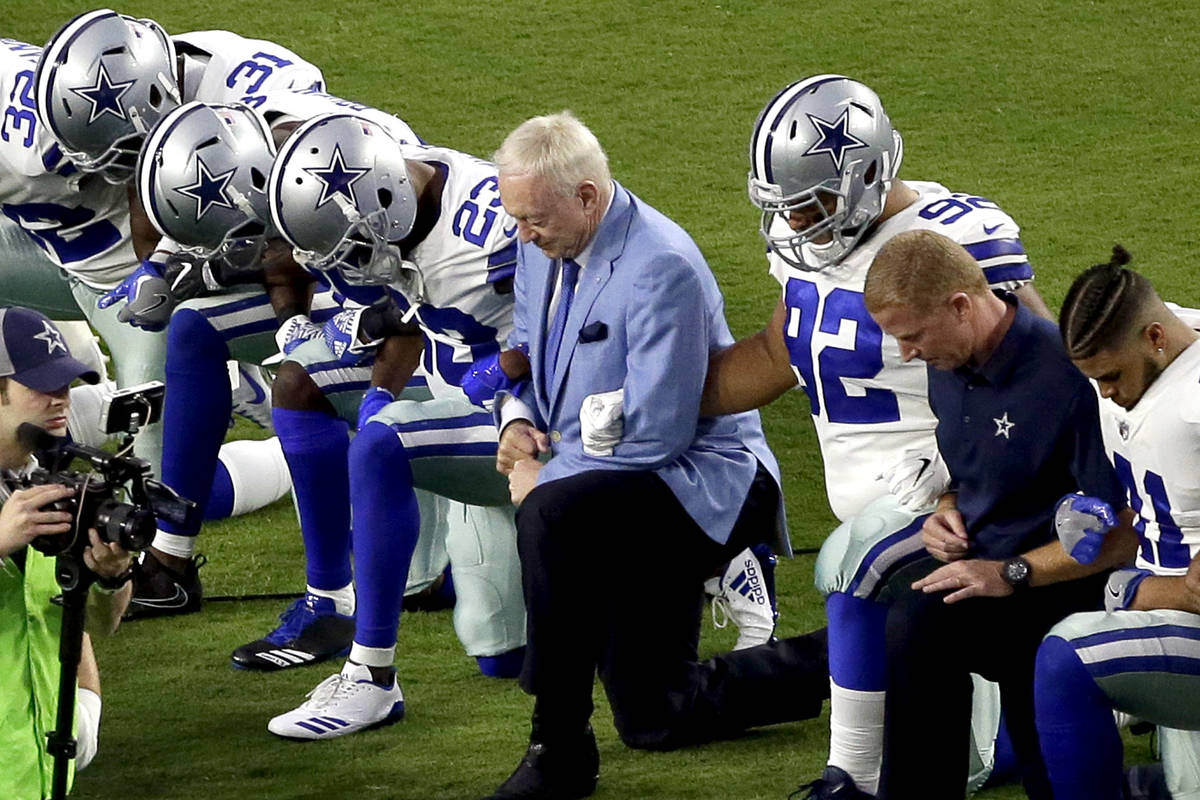 In this Monday, Sept. 25, 2017, file photo, the Dallas Cowboys, led by owner Jerry Jones, center, take a knee prior to the national anthem before an NFL football game against the Arizona Cardinals in Glendale, Ariz. (AP Photo/Matt York, File)

Fewer American adults say they’ll bet on the NFL this year, with 42 percent of those surveyed in a recent report claiming they’re less excited about the upcoming season, which kicks off Thursday afternoon.

About 33.2 million people — 13 percent of total American adults — are expected to bet on this year’s season, according to an August survey from the American Gaming Association, the national trade group representing the $261 billion U.S. casino industry. Last year, the trade group found that nearly 40 million Americans, or 15 percent of adults, wagered on the 2019-20 season.

The decline in bettors fits within the survey’s margin of error, but it comes as 29 million more American adults have access to legal sports betting in their home state. That’s 54 percent more than at the start of last season.

Respondents said their excitement over the NFL season has dimmed for various reasons, including increased political activism around the league and the inability to attend games.

Despite the survey results, industry watchers say they expect strong betting numbers from the league this year.

“I’m skeptical that NFL betting volumes will actually decrease to any meaningful degree,” said Eilers & Krejcik analyst Chris Grove. “Consumers are notoriously bad at predicting their own behavior. I suspect these survey results are more reflective of consumers blowing off steam versus presaging some sort of mass abandonment of the NFL.”

Backing up talk with action

The AGA’s online survey was conducted August 24-27 among a national sample of 2,200 American adults.

Roughly 36 percent of respondents who said they are less enthused over this year’s season cited increased political activism around the league. Nineteen percent said it is due to the absence of fans in stadiums, and another 17 percent blame the inability to gather with friends to watch games.

Brendan Bussmann, director of government affairs for Las Vegas-based Global Market Advisors LLC, expects these factors to lead to a down tick in wagers.

But others say it’s unlikely that these survey responses will translate to any meaningful declines in the NFL’s betting volumes.

Grove cited previous NFL seasons’ betting volumes, which didn’t appear to suffer despite also operating under a more politicized climate. One example of political activism during games — kneeling during national anthems — started back in 2016.

Additionally, Grove said betting volumes at the NBA have been “impressive” so far, even with players sporting gear emblazoned with social messages like Black Lives Matter and boycotting games to bring attention to racial injustice and police brutality.

With the NBA and MLB resuming play July 30 and July 23, respectively, total sports betting gross gaming revenues in July were up 67 percent year-over-year, according to estimates from a Truist report published Tuesday.

“We don’t have a lot of credible reference points that support the idea that consumers are going to back up this talk with action,” Grove said. “Assuming we get a full season, you should see growth year-over-year in terms of NFL betting at legal sports books in the U.S.”

But the NFL’s season does come with a fresh set of challenges this year.

Grove said it’s unclear how the current state of the U.S. economy will impact betting volumes. More than 10 percent of the U.S. population was unemployed in July.

Sports betting consultant Sara Slane, a former senior vice president of public affairs for the AGA, said less foot traffic in Las Vegas could hurt this year’s betting volumes. Limited brick-and-mortar sportsbooks across the country could also impact bets; according to the AGA’s website, 97 of 991 U.S. commercial and tribal casino properties remained closed as of Thursday.

“Operators are banking on this being a big football season. There’s going to be a lot of advertising, marketing push behind that,” Slane said. “Hopefully that translates into real money.”

Grove said sports betting will continue to see momentum as legalization continues to spread across the country.

As of Wednesday, 18 states — plus Washington, D.C. — offer legal, regulated sports betting. Another four states are not yet operational, and seven states are considering legalization.

“If you’re thinking about revenue numbers, 2020 might feel like a slower year than 2019 in absolute terms,” he said, pointing to the impacts of COVID-19, which halted many professional leagues. “But in terms of the overall momentum, (sports betting) is on a pretty aggressive growth trajectory.”

Shifting away from casual bets

The AGA’s survey also found more Americans are shifting away from casual bets on the NFL and opting to place bets online or at physical sportsbooks.

Of those betting on the NFL this year, 11.3 million, or 34 percent, are expected to place bets online, either through legal or illegal platforms. Last year, 29 percent fell in this category.

Bettors already are picking favorites to win this season’s Super Bowl. Thirteen percent plan to wager on the Kansas City Chiefs and 9 percent on the Dallas Cowboys. The Baltimore Ravens, Cincinnati Bengals, Miami Dolphins, New England Patriots and San Francisco 49ers each are receiving wagers from 5 percent of bettors.