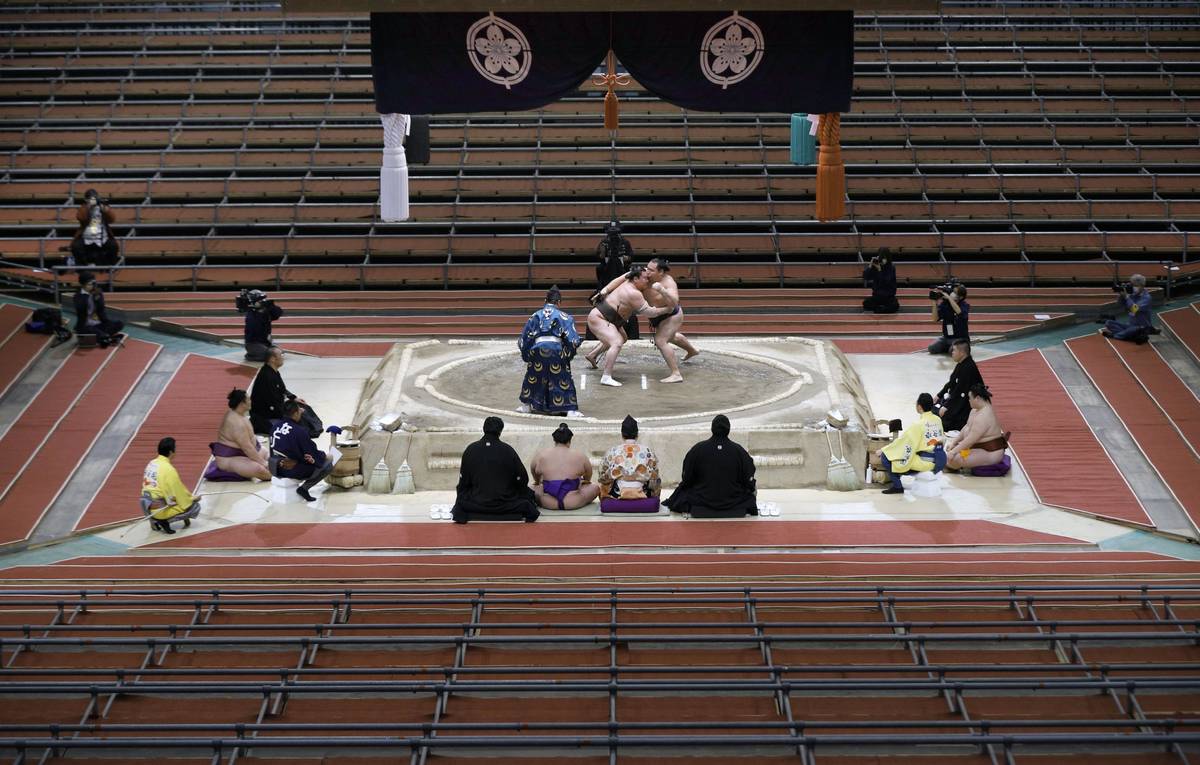 Hakuho (L) takes on fellow grand champion Kakuryu on the 15th day of the Spring Grand Sumo Tournament at an empty Edion Arena Osaka on March 22, 2020. Hakuho won, seizing a record-extending 44th top-level championship at the tournament, which was held behind closed doors due to the outbreak of the new coronavirus. (Kyodo via AP Images) ==Kyodo 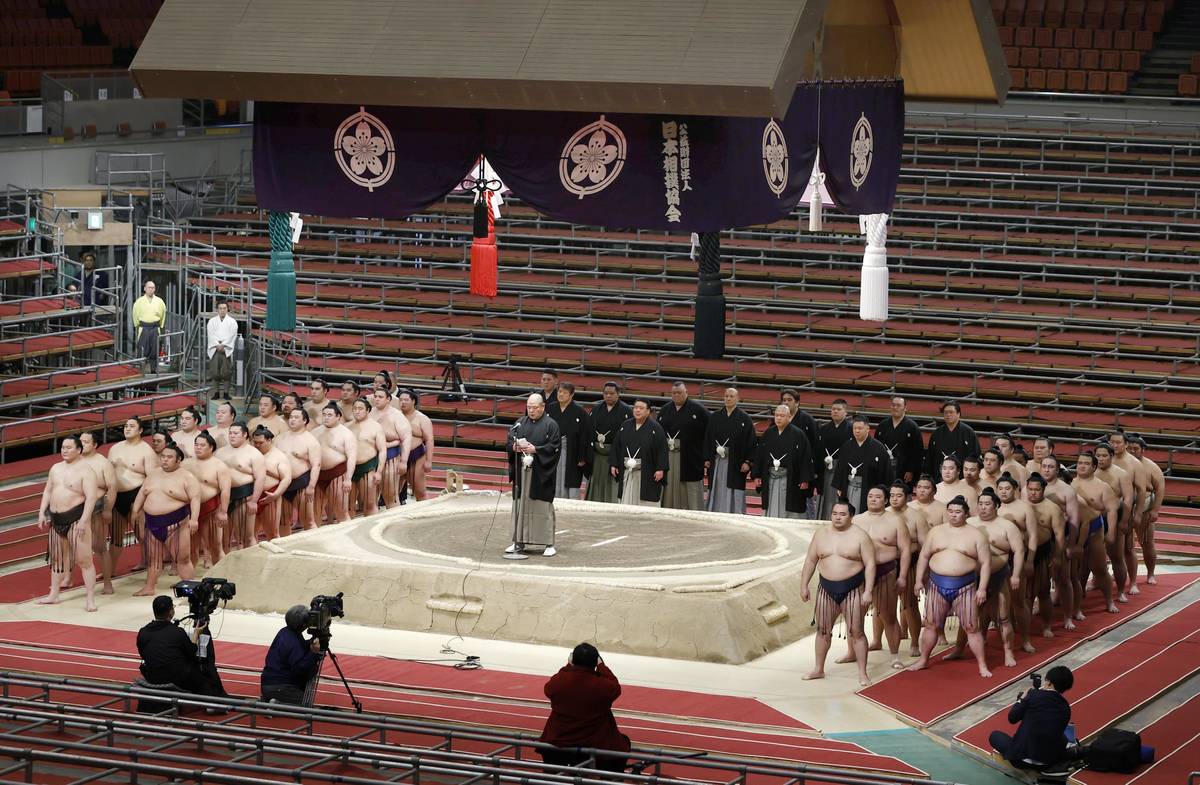 Japan Sumo Association Chairman Hakkaku (on the raised ring) delivers a speech in closing the Spring Grand Sumo Tournament at an empty Edion Arena Osaka on March 22, 2020. The tournament was held behind closed doors due to the outbreak of the new coronavirus. (Kyodo via AP Images) ==Kyodo 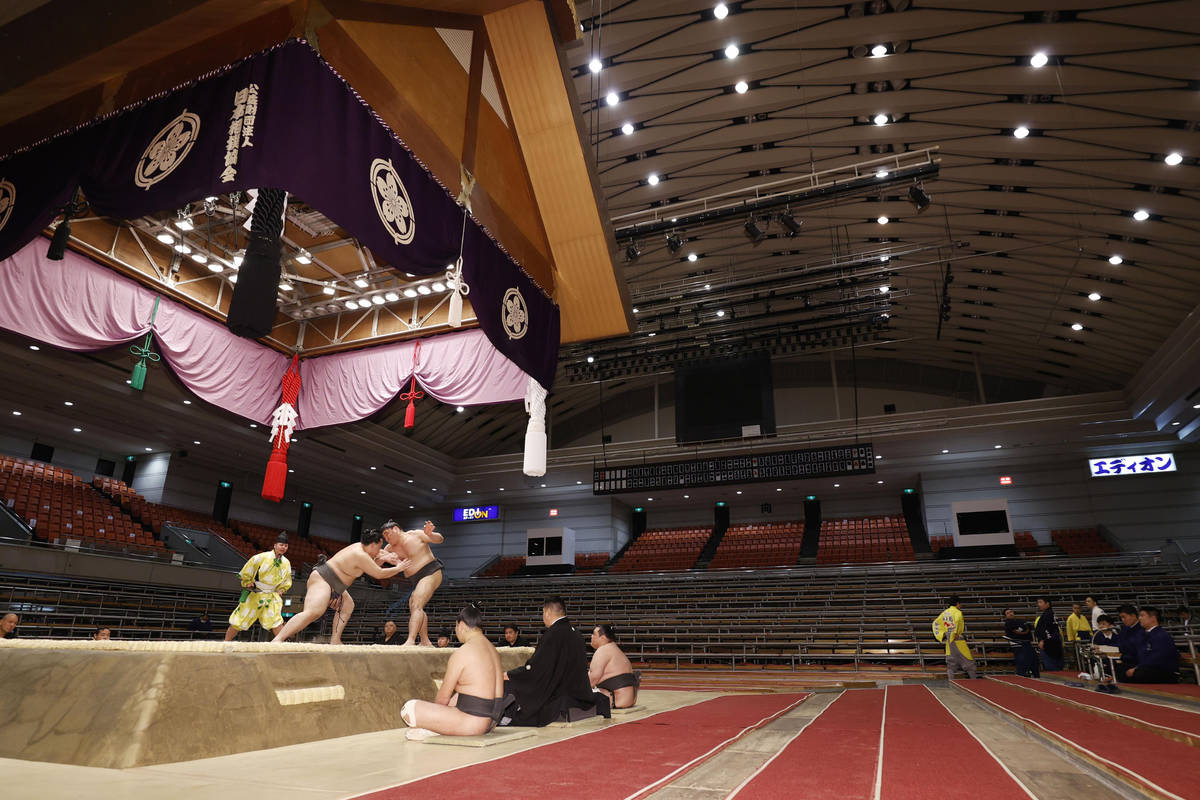 Sumo wrestlers fight on the ring as spectators' seats are empty during the Spring Grand Sumo Tournament in Osaka, western Japan, Sunday, March 8, 2020. The 15-day sumo tournament started on Sunday with no spectators, affected by fears of the new coronavirus outbreak. (Kyodo News via AP) 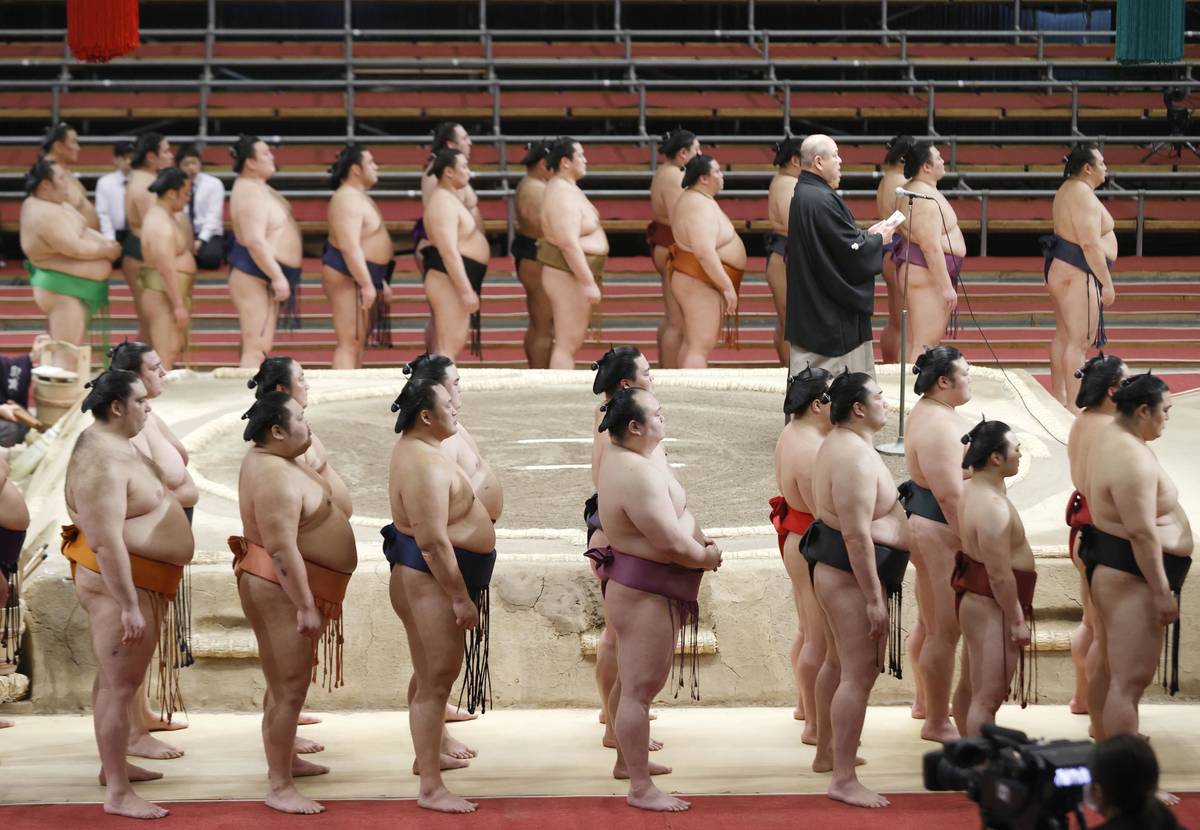 Japan Sumo Association Chairman Hakkaku (on the raised ring) delivers a speech in closing the Spring Grand Sumo Tournament at an empty Edion Arena Osaka on March 22, 2020. The tournament was held behind closed doors due to the outbreak of the new coronavirus. (Kyodo via AP Images) ==Kyodo

The book took more than 1,000 bets on its Nevada mobile app on the final three days of matches at SUMO Haru Basho 2020, a professional sumo wrestling tournament that ended Sunday in Osaka.

“We won a peanut to it. We wrote a few bets. So I guess, all in all, I’d have to give it a passing grade,” William Hill sportsbook director Nick Bogdanovich said.

William Hill is based in London, where wagering on sumo wrestling also proved popular after the vast majority of the world’s sporting events were canceled or suspended because of the coronavirus pandemic.

“We’re talking with them all the time. They said they were getting a little action on sumo, so we figured we’d give it a shot here,” Bogdanovich said. “That’s where we got our prices, from our big brother across the pond.”

Sumo wrestling has been a staple as a Japanese spectator sport for several centuries. Haru Basho is one of six annual events on the Grand Tournament Schedule. Each event features 15 consecutive days of matches between the world’s best sumo wrestlers.

Hakuho won Haru Basho with a 13-2 record, beating fellow grand champion, or yokozuna, Kakuryu (12-3) in Sunday’s final match. The next tournament is scheduled from May 10 to 24.

Wagering on Australian rules football was promising for bookmakers and bettors alike with its games televised on FS1, which aired a live game Saturday night. But the season was suspended Sunday until May 31 in the wake of a government crackdown on nonessential travel because of the coronavirus.

“We had always booked that, so it was something people were used to. That was pretty popular. That was rough that they canceled that,” Boganovich said. “We were looking forward to doing a little business, because you could watch it on TV.”

Bogdanovich said William Hill has been writing “decent business” to Turkish and Belarusian soccer. But the only live soccer action on Sunday’s betting card was in Nicaragua.

“Soccer’s the go-to sport, but we’re down to slim pickings (Sunday). We’re booking Nicaraguan soccer,” he said. “Anyone who’s open for business, we’re trying to see if anyone wants to bet that.”