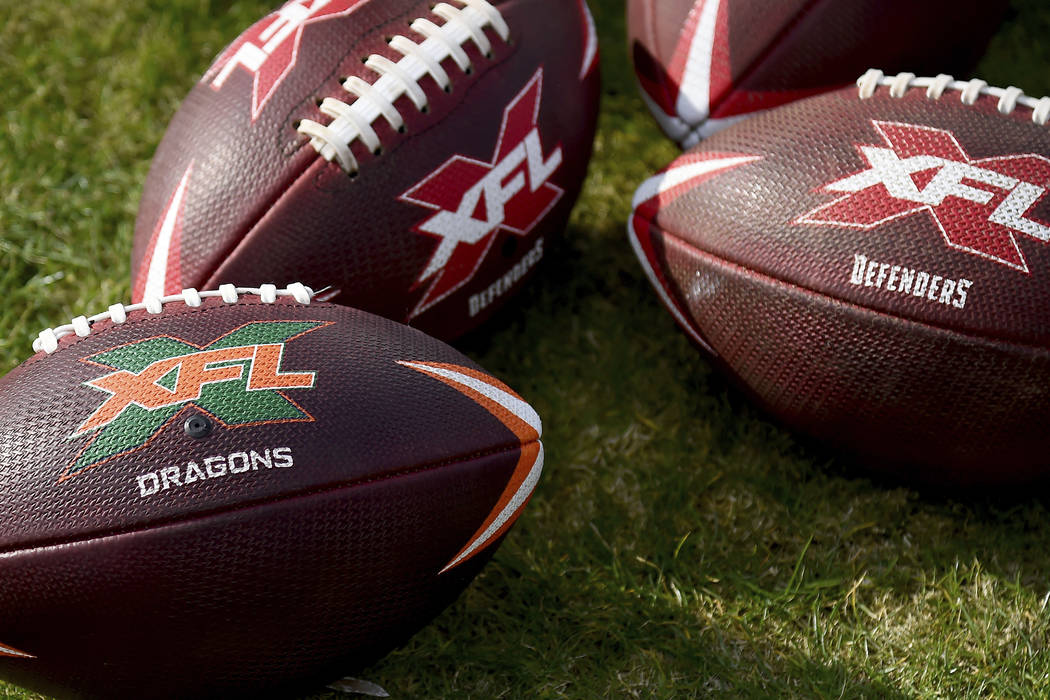 A detailed view of official XFL footballs during the first half of an XFL football game between the DC Defenders and the Seattle Dragons, Saturday, Feb. 8, 2020, in Washington. (AP Photo/Will Newton)

Circa Sports stuck its neck out on totals for Week 1 of the XFL, but got away without a scrape.

The sportsbook was the first in Las Vegas to post totals for the debut of the new football league, and over bettors pounced immediately on the opener of 40½.

“We went to 44 quickly, which would be a massive move on totals in the NFL,” sportsbook manager Chris Bennett said. “We just kept taking more over money.”

The totals all eventually closed at 51 or higher. But in the end, none of the games had more than 50 points scored, and two games went under the 40½ opener.

“We managed to come out ahead on the four games, which I consider a minor miracle,” Bennett said.

Betting handle on each game was similar to a major conference college basketball game, he said.

Favorites went 2-2 in Week 1. On Saturday, the D.C. Defenders covered as 9½-point favorites in a 31-19 win over the Seattle Dragons, and the Houston Roughnecks romped past the Los Angeles Wildcats 37-17 as 7½-point favorites.

On Sunday, the New York Guardians earned a 23-3 victory over the Tampa Bay Vipers as 3½-point home underdogs, and in the biggest upset of the weekend, the preseason title favorite Dallas Renegades lost 15-9 to the St. Louis Battlehawks, who were 9-point road underdogs. Dallas was without injured starting quarterback Landry Jones.

Much of the interest in the league has focused on the rule changes, including those that encourage kickoff returns and those that eliminate extra-point kicks in favor of allowing teams to go for 1, 2 or 3 points by running a play from the 2-, 5- or 10-yard line, respectively.

Bennett said he watched a fair amount of each game to get a better feel for the league. He said he largely supported the rule changes, but nothing could change that it was “practice squad-level NFL.”

“I just don’t see how it’s going to be real popular,” he said.

Bennett said he was encouraged to see that all the money bet on the over in the games didn’t represent sharp knowledge of the individual teams.

“It told me they didn’t know more than we did,” he said. “It was all based on (their interpretation of) the rules.”

Betting was a big part of the XFL’s broadcasts. Lines and totals were posted on the screen and acknowledged by the broadcasters, and VSiN partnered with iHeartRadio for live “betcasts” during the games.

Jimmy Vaccaro, a longtime bookmaker who is now an oddsmaker at the South Point, said betting was finally being embraced after years of a “hypocritical” stance by sports leagues who benefited from the interest from bettors while shunning betting itself.

With no high-impact deals completed at the trade deadline, the NBA shapes up as a three-team race.

The Los Angeles Lakers were the +225 favorites at the Westgate on Monday, followed by the Milwaukee Bucks (+275) and Los Angeles Clippers (+300).

The Houston Rockets fully embraced a “small ball” style at the deadline by trading for forward Robert Covington and trading away center Clint Capela, leaving them with a starting lineup without a player taller than 6 feet 7 inches.