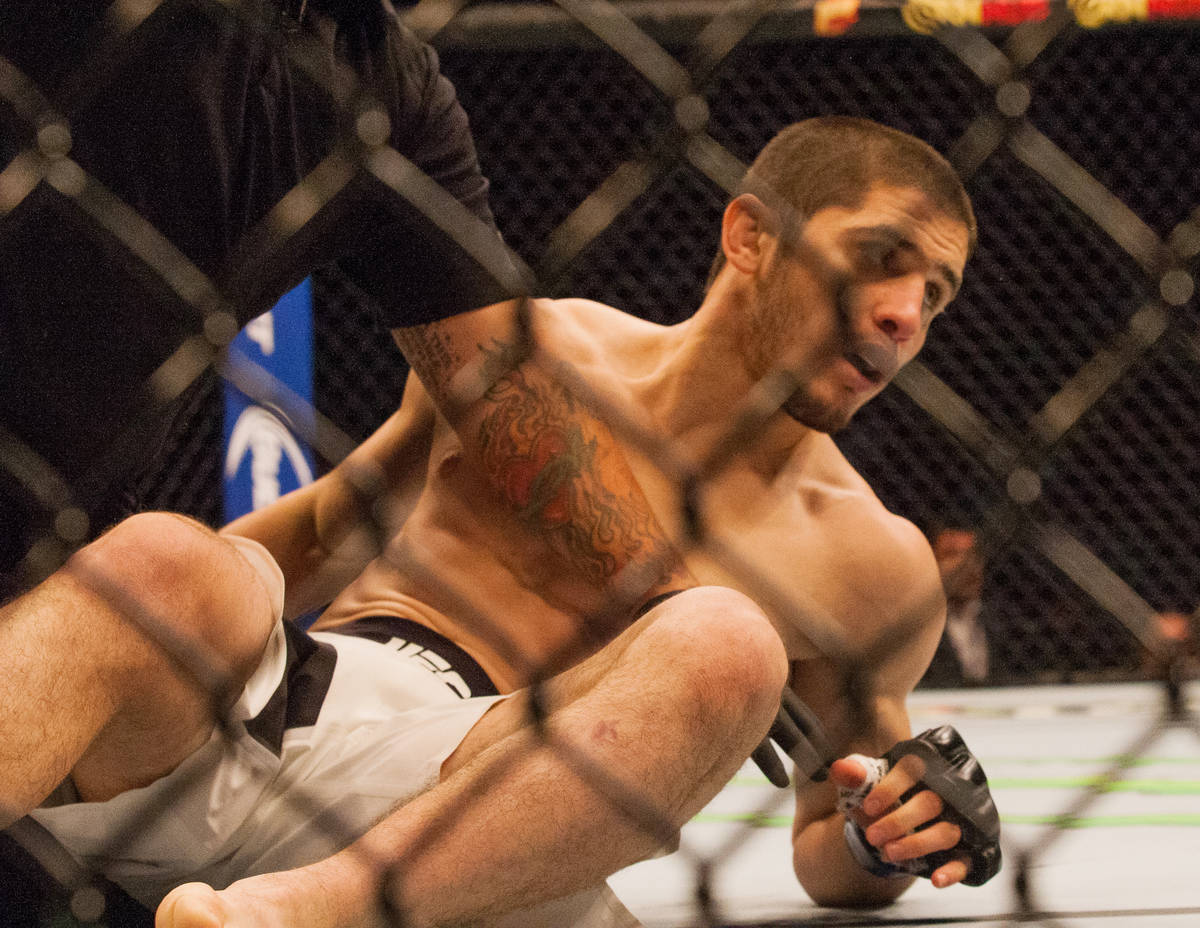 UFC fighter Islam Makhachev, is being help by the UFC medical staff in round-1 during the UFC 192 mixed material arts bout at MMA UFC 192, Saturday, October 3, 2015 in Houston, Texas. Andriano Martins defeated Islam Makhachev in round 1. (AP Photo/Juan DeLeon)

Favorites went 11-1 at UFC 264, where Dustin Poirier (-130) beat Conor McGregor via first-round TKO in the main event after McGregor suffered a broken leg.

Islam Makhachev is a heavy -605 favorite over Thiago Moises in the main event of UFC on ESPN 26 on Saturday at the Apex.

Rather than lay the prohibitive price, which is the largest on the card, MMA handicapper Lou Finocchiaro recommends a play on Makhachev to win inside the distance, which pays +145 at Circa Sports.

“I base that on two things,” said Finocchiaro (@GambLou). “Makhachev’s striking is superior to Moises and I’ve been taught that (Makhachev’s) world-class wrestling Sambo is kryptonite to (Moises’) Brazilian Jiu-Jitsu.

“So if these guys do spend time on the floor, it’s Makhachev on top and Moises on the bottom and I just don’t think that’s a positive prescription for Moises.”

In the co-main event, Finocchiaro is backing former women’s bantamweight champion Miesha Tate over Marion Reneau, who plans to retire after the bout.

The fight is Tate’s first since she walked away from the sport in 2016 following losses to Amanda Nunes and Raquel Pennington and some personal turmoil that included a bad breakup with her longtime boyfriend Bryan Caraway, a fellow UFC fighter.

“Tate was in a terrible dark spot and her five-year retirement was exactly what she needed,” Finocchiaro said. “She has a strong wrestling base and has been in with the elite fighters of the women’s bantamweight division. She’s going to enter this fight refreshed, focused and ready to fire.”

Rodolfo Vieira will try to bounce back from a stunning upset loss in February to Anthony Hernandez when he squares off against Dustin Stoltzfus.

Rather than lay -220 with Vieira, Finocchiaro recommends a play on the fight to go over 1½ rounds.

“Vieira is an absolute Brazilian Jiu-Jitsu savant,” he said. “However, he’s learning how to be a mixed martial artist and in his first fight, he was a -450 favorite and he got subbed by the opponent.

“He looked dominant but he ran out of gas. Stoltzfus has never been subbed in his career but he’s nowhere near the class of athlete that Vieira is. I’m going to take it for granted that Stoltzfus knows he needs to do everything he can to push Vieira to the second and third round to have a chance in this fight.”

In the prelims, Finocchiaro is banking on Sergey Morozov to upset Khalid Taha.

“Taha has faced a higher level of competition,” he said. “But Morosov gets this fight because he’s got a little more power on his feet and has a little more complete standup game than Taha. And he definitely has some Sambo wrestling.”

“Though he lost, that fight prepared him well for Taha,” Finocchiaro said.