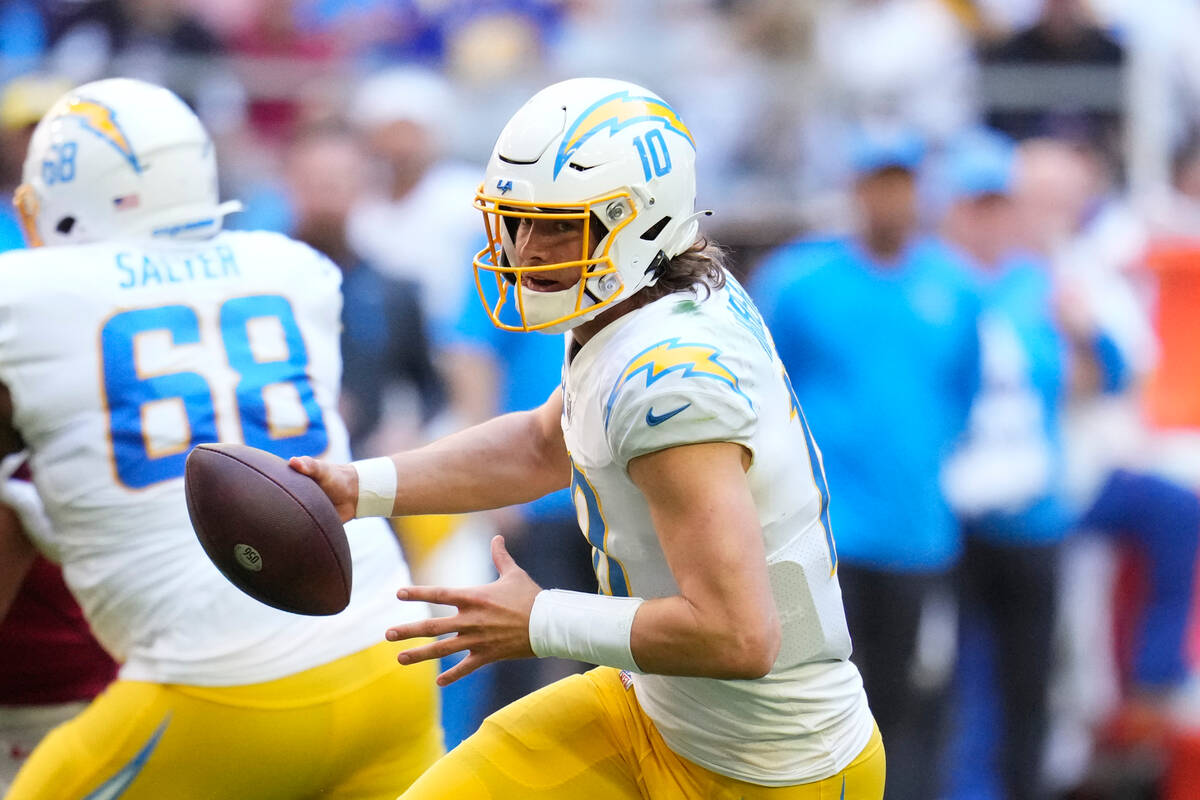 Los Angeles Chargers quarterback Justin Herbert rolls out against the Arizona Cardinals during the first half of an NFL football game in Glendale, Ariz., Sunday, Nov. 27, 2022. The Chargers won 25-24. (AP Photo/Ross D. Franklin)

Analysis: The Raiders have won two straight road games. Maybe now the pressure of being back home is a negative. But they’re 2-2 straight-up and against the spread this season at Allegiant Stadium, where they outlasted the Chargers 35-32 in a wild overtime win in last season’s finale. I think the Raiders have enough positive momentum to win this very important AFC West division matchup.

By the numbers: The Chargers are 5-1 ATS on the road. … Los Angeles averages only 85.8 rushing yards per game, while its defense allows 151.5 rushing ypg. NFL rushing leader Josh Jacobs should have a big game for the Raiders.

Analysis: New York QB Mike White appears to be a significant upgrade over Zach Wilson. The Jets are in playoff contention despite Wilson’s ineptitude, mainly due to their No. 4-ranked defense (308.8 ypg), which keeps them competitive. The Jets need this game more than the Vikings, who have a five-game lead in the NFC North.

By the numbers: In White’s debut last week as a starter, he completed 22 of 28 passes for 315 yards and three touchdowns. … Minnesota’s defense allows 276.1 yards passing per game, which ranks last in the league.

Analysis: On the surface, it looks like the Ravens should win easily. However, Baltimore has blown four fourth-quarter leads and is only 4-6-1 ATS as a result. This is too many points to lay with a team that can’t close out its opponents against a Denver squad that ranks third in total defense (306.4 ypg).

By the numbers: The Ravens have surrendered 108 fourth-quarter points, the most in the league. … The Broncos are last in the league in scoring (14.3 points per game) and rank 24th in total offense (319.1 ypg).

Analysis: This is a tough call. Atlanta has flipped from a small favorite to a slight underdog at some sportsbooks. Neither team has a very good defense, so a high-scoring game is very possible.

Analysis: After a very hot start, the Eagles have shown expected regression during a 1-3 ATS skid. Philadelphia will win if QB Jalen Hurts continues to outperform the defenses he’s facing. But this will be a close game, as the Titans control the clock by mainly running Derrick Henry, who’s second in the league in rushing with 1,048 yards.

By the numbers: The Eagles are 6-5 ATS, while the Titans are 8-3 ATS. … The Eagles average 162.5 rushing ypg, largely due to Hurts’ mobility. … Tennessee coach Mike Vrabel is 21-7 ATS as an underdog of three points or more.

Analysis: Detroit has flipped the switch and has been surprisingly competitive in its last four games when it looked like this season was turning into the same old story for the long-suffering Lions. Don’t let the comeback against the Ravens fool you; the Jaguars are still a bad team with lots of problems.

Analysis: Washington QB Taylor Heinicke has been the biggest difference in the Commanders’ recent turnaround, as he has shown superior leadership and composure over the highly overrated Carson Wentz. The Giants started the season 6-1 but have since gone 1-3.

By the numbers: Washington has won three straight and six of seven while going 6-0-1 ATS. … The Commanders have allowed an average of only 15.4 ppg in their last seven games. … Washington is 7-4-1 ATS this season, The Giants are 8-3 ATS.

Analysis: This game all depends on Cleveland QB Deshaun Watson, who hasn’t played in nearly two years. Houston is by far the worst team in the league, and coach Lovie Smith looks as clueless as he did when he coached the Bears. I’ll pass with too many unknowns. But with Cleveland’s excellent rushing tandem of Nick Chubb and Kareem Hunt, Houston could be in trouble early, as I assume the Browns will play it safe and conservative on Watson’s passing and rely heavily on running the ball.

Analysis: It appears Chicago QB Justin Fields will start, but the Bears have significant injuries, with WR Darnell Mooney out for the season. Mooney was the Bears’ most productive receiver. Aaron Rodgers has owned the Bears to the tune of 24-5 in his career.

By the numbers: The Packers are 4-8 ATS. The Bears are 4-7-1 ATS. … Chicago averages 192.1 rushing ypg, which is mainly due to Fields’ ability to run out of the pocket. But his mobility is in question due to his shoulder injury.

Analysis: The Rams are a train wreck, and to make things worse, QB Matthew Stafford, WR Cooper Kupp and DT Aaron Donald are all out. Despite that, I think the number is a bit too high. Seattle is getting too much respect to be a touchdown road favorite. The line value points to the Rams.

Analysis: Bengals RB Joe Mixon is not likely to play, but WR Ja’Marr Chase appears likely to return from injury. The Chiefs have the league’s best offense. This could likely be a shootout. I don’t see an advantage to either side, so I’ll pass.

By the numbers: Kansas City QB Patrick Mahomes leads the league in passing yards and touchdowns. … Chiefs TE Travis Kelce leads the league in TD receptions with 12. … The Bengals have won four of their last five games straight-up and ATS and are 8-3 ATS overall.

Analysis: Dallas is obviously the much superior team, but the high point spread causes me to pass. I never recommend laying double digits in any NFL game. In fact, double-digit underdogs are 11-6 ATS this season for a win rate of 64.7 percent.

By the numbers: The Colts are 5-7 ATS. Dallas is 7-4 ATS but failed to cover against the Giants on Thanksgiving in its only double-digit favorite role. … The Cowboys rush for 139.2 ypg, and the Colts give up 118.3 rushing ypg. … The most glaring stat is the Colts are -10 in turnover ratio compared to Dallas at +5.

Analysis: I have two systems that apply to the Saints and one system that favors the over. I like the Saints in a hopefully high-scoring game. The low total helps the possibility of the game going over.