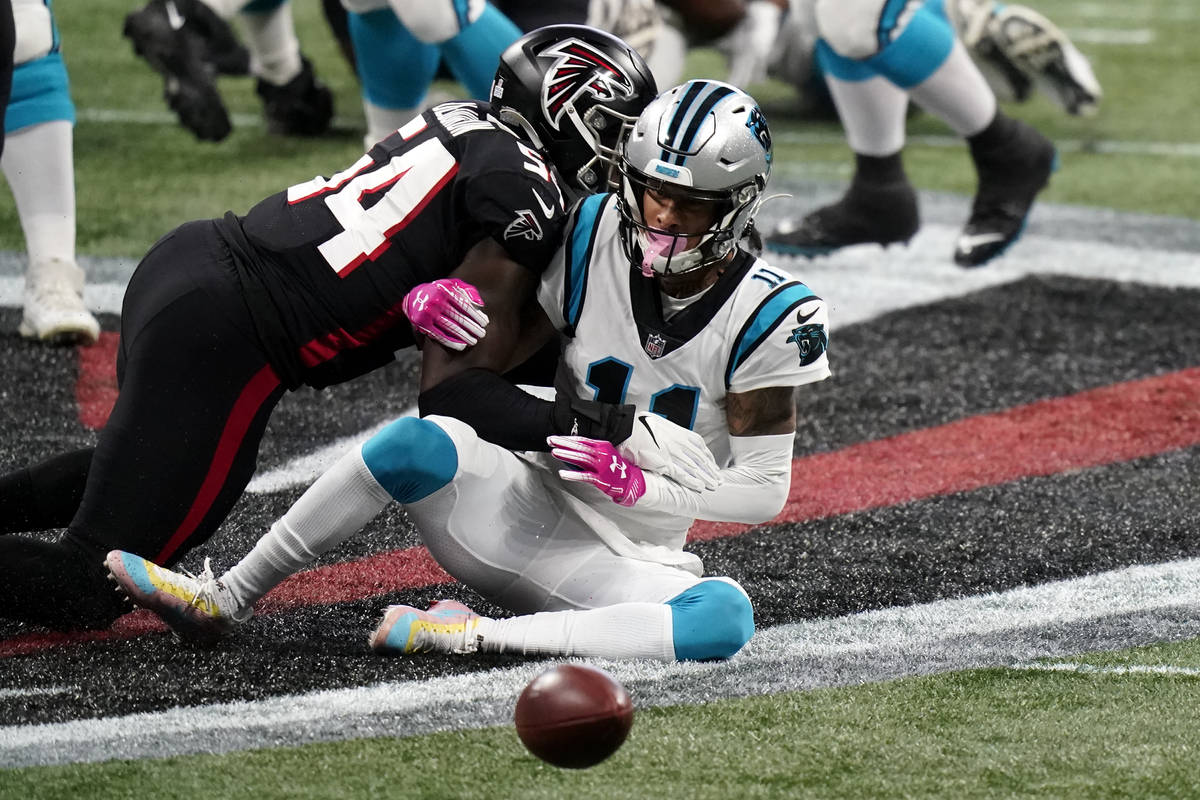 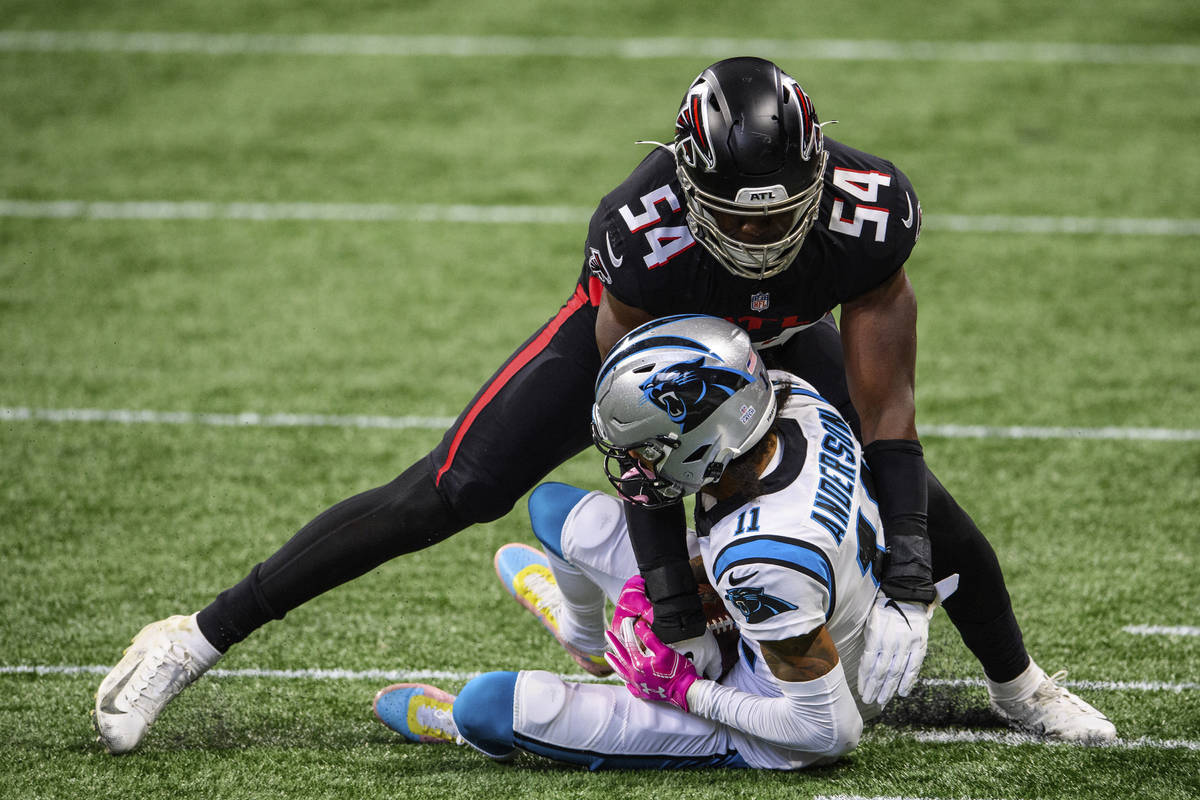 Analysis: The Bears opened with three wins before splitting their last two games and getting outgained in both. Rookie coach Matt Rhule has guided the Panthers to three straight outright wins as underdogs. Carolina quarterback Teddy Bridgewater has been a great surprise, completing 73 percent of his passes while helping the Panthers average 399.6 yards per game, which ranks sixth in the NFL.

Analysis: I’m not a Matt fan, Patricia or Stafford. I’m fading Stafford, who is one of the NFL’s biggest imposters. The quarterback is in his 12th season, and we are still waiting for him to “arrive.” The Lions have lost 12 of their last 13 games, with their only win by three points, and now they’re favored by 3. Jaguars QB Gardner Minshew will shine here.

Analysis: These two are a combined 1-9, but that doesn’t mean we can’t find a winner here. The Falcons start a new regime under Raheem Morris, Atlanta’s defensive coordinator, after coach Dan Quinn was fired. The Falcons are 31st in total defense and scoring defense under Morris. His reward for such ineptitude is to be promoted to head coach. But Minnesota will be without NFL leading rusher Dalvin Cook, and QB Kirk Cousins can’t pick up the slack.

Analysis: The Titans responded to 23 positive COVID-19 tests and only one practice in 12 days by crushing the Bills in a 42-16 win Tuesday. Houston posted its first win without Bill O’Brien, as it can be nothing but better without him as coach. Now the Texans must find a way to contain QB Ryan Tannehill, who is 13-4 in 17 starts with the Titans. Tennessee should have a bit of a letdown here.

Analysis: Here’s another combined 1-9 matchup. Isn’t there a quality control thing somewhere? The Football Team was bogged down with 38 yards rushing in last week’s 30-10 loss to the Rams, and New York is eighth in total defense, allowing 343 yards per game. I always laugh when a winless team is favored, and here are the Giants in that role, though New York is on a 5-0 ATS run against teams with a losing record.

Analysis: Maybe the Browns are for real after their dominant win over the Colts put them in a different light. Big Ben and the Steelers are back in top form, and the 38-year-old quarterback doesn’t have time to play around after returning from an injury that cost him most of last season. This must be a different Browns team, as the trends in this rivalry have them buried again.

Analysis: Baltimore has a habit of beating up on the little guys, as it did in last week’s 27-3 win over the Bengals. Philadelphia is riddled with injuries and leads the league in giveaways with 11. The Ravens have the NFL’s No. 1 scoring defense, allowing 15.2 points per game, and the Eagles can’t run. But I expect something unexplainable to happen.

Analysis: After Indianapolis QB Philip Rivers threw a pick-six and took an intentional grounding penalty in the end zone for a safety in last week’s loss to Cleveland, Colts coach Frank Reich had to reassert that ‘Philip is our quarterback.’ At $25 million, I hope so. Cincinnati is 3-2 ATS, and there is promise in Joe Burrow. This is a tough call, as the Bengals should show up after getting beat up on the road by the Ravens. But they’ll struggle to run the ball, as the Colts get back on track at home.

Analysis: Too many questions about practices and schedule changes in this once iconic AFC matchup. Even having played the Jets, Denver’s offense is ranked 29th. The Patriots have had extended time to prepare and are looking to grind it out to bounce back from their loss at Kansas City.

Analysis: A year ago this week, Miami reportedly moved on from Ryan Fitzpatrick and started Josh Rosen. Now Rosen isn’t on an NFL roster and “Fitzmagic” is again the starter, with rookie Tua Tagovailoa on the sideline. The veteran quarterback will face one of his seven former teams in the Jets, who might go winless. New York ranks 31st in total offense (279.4 ypg) and last in scoring offense (15 ppg). The Jets are 30th in scoring defense, allowing 32.2 ppg.

Analysis: A quarterback matchup for the ages. It’s been said that 43-year-old Tampa Bay QB Tom Brady is lacking the zip on the ball he once possessed. There’s no such storyline for Green Bay QB Aaron Rodgers, who leads the NFL’s No. 1 scoring offense (38 ppg) and No. 2 total offense (445.5 ypg). But the Buccaneers have the league’s No. 2 total defense (298.2 ypga). We will learn more about Brady — if he remembers where he is, what quarter it is and what down it is.

Analysis: San Francisco QB Jimmy Garoppolo has yet to play at the level that was expected of him when he was traded from the Patriots. The Niners’ two wins are against the Jets and Giants, who are a combined 0-10, and it’s unknown if they can beat any team that isn’t from New York. Injuries have hurt San Francisco, but if it can get ready for anyone, it would be a favorite from Los Angeles. The Rams have played well, with their loss at Buffalo, where they erased a 28-3 deficit before losing in the final seconds.

Analysis: The gambling world realized Tuesday that the Bills are not infallible after they were beaten by the Titans, and the Chiefs also joined the mortals after the Raiders upset them in Kansas City. It’s difficult to read the schedule changes and missed practices, but I think Buffalo gained more in its loss than Kansas City did. With home cardboard cutouts for support, the edge goes to Buffalo.

Analysis: The Andy Dalton era as Cowboys quarterback begins. The Cowboys are No. 1 in total offense, averaging 488 yards per game. But that won’t matter if Dallas’ defense continues to struggle. The Cowboys are 27th in total defense, allowing 404.4 yards per game, and last in scoring defense, allowing 36 ppg. Look for running back Ezekiel Elliott to be the focus of the refreshed Dallas offense.

By the numbers: Arizona is 8-2-2 ATS in its last 12 road games but 2-5 ATS as a favorite. … The Cardinals have gone under in all five games this season. … Dallas is on a 4-0 over streak. … The Cowboys are 4-0 ATS in their last four games as home underdogs, but are on an 8-20 ATS slide vs. teams with a winning record. … Dallas and the Jets are the only two teams with an 0-5 ATS record.