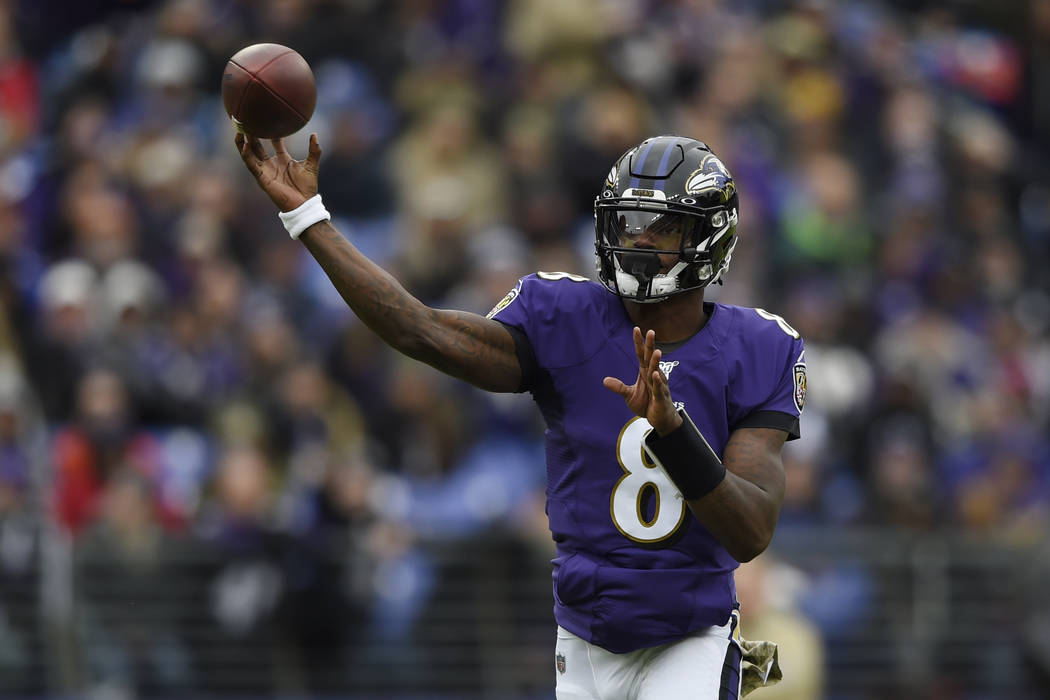 Baltimore Ravens quarterback Lamar Jackson throws a pass against the Houston Texans during the first half of an NFL football game, Sunday, Nov. 17, 2019, in Baltimore. (AP Photo/Gail Burton)

With each Lamar Jackson performance, the gap between the Super Bowl favorite New England Patriots and upstart Baltimore Ravens appears to narrow.

Jackson, the sensational second-year quarterback, has led the Ravens to six straight wins and an 8-2 record. The past four wins have included double-digit victories over likely playoff teams in Seattle (30-16), Houston (41-7) and, yes, New England (37-20).

The Patriots still hold the No. 1 seed in the AFC at 9-1, but two sportsbook directors said that’s the only thing keeping New England favored over Baltimore in the conference.

“All it is is home field,” William Hill sportsbook director Nick Bogdanovich said.

Esposito said the AFC had become a two-team race, with even Kansas City ranking “far below” the Patriots and Ravens at this point.

However, with their championship pedigree and their current edge for home-field advantage in the playoffs, the Patriots remain the favorites to win the AFC at various sportsbooks.

The prices were even closer at some other books. Circa Sports has the Patriots at plus 132 to win the AFC and plus 325 to win the Super Bowl, while the Ravens were at plus 175 and plus 400, respectively.

Sunday’s marquee game has the Dallas Cowboys traveling to New England. The Patriots were installed as consensus 6½-point favorites with a total of 46, and the line hit 6 at a couple of books Monday afternoon.

Bogdanovich and Esposito said the line would likely trend lower and was extremely unlikely to get to 7, where sharps would see a clear “buy” sign on Dallas.