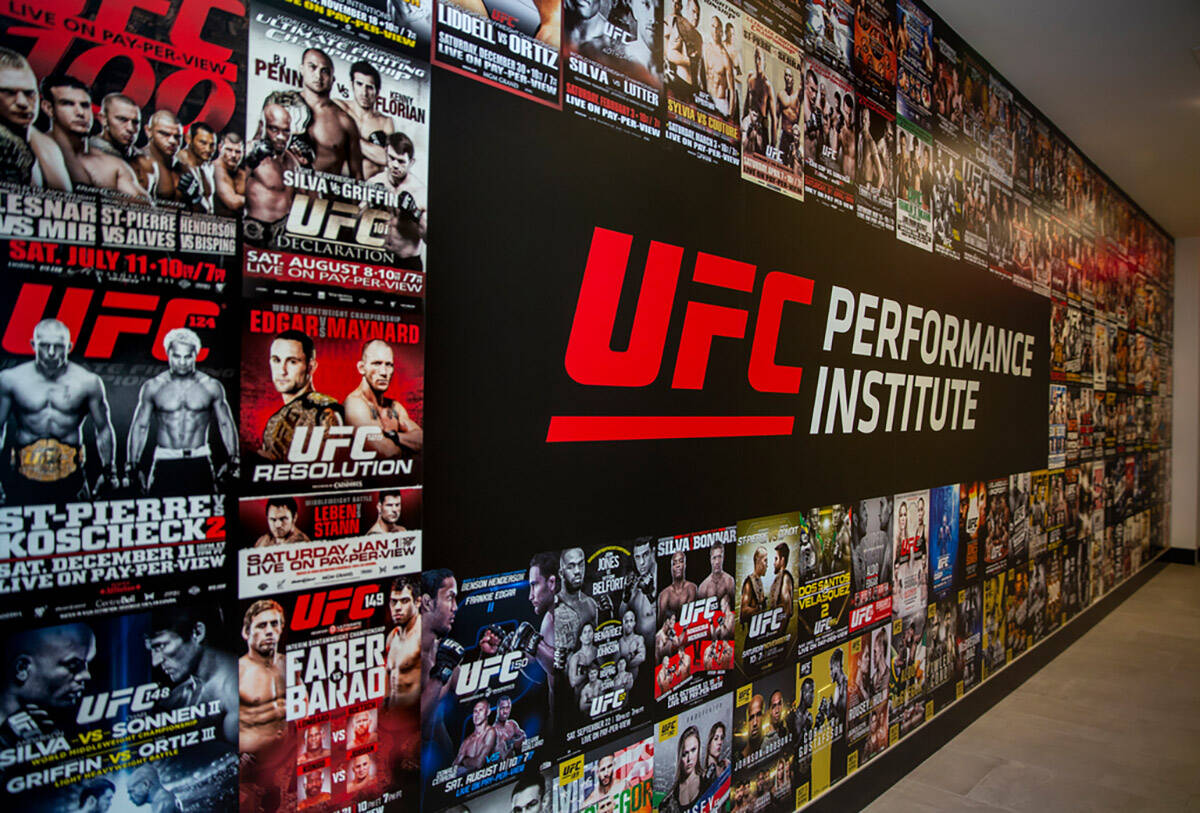 Past fighting events are displayed on a wall within the UFC Performance Institute located at their headquarters on Wednesday, Aug. 14, 2019 in Las Vegas. (L.E. Baskow/Las Vegas Review-Journal) @Left_Eye_Images

The regulatory agency that oversees the gaming industry in Ontario has banned sportsbooks from offering and taking bets on Ultimate Fighting Championship events because of integrity concerns.

The Alcohol and Gaming Commission of Ontario (AGCO) said in a statement the Las Vegas-based UFC does not prohibit insiders from wagering on its events, which is in violation of the betting integrity standards in the Canadian province.

“The Standards exist to protect the betting public and to provide the necessary safeguards against odds manipulation, match-fixing and other integrity issues,” AGCO Registrar and CEO Tom Mungham said in a statement. “This is not a decision we take lightly, knowing the popularity of UFC events in Ontario’s sports books. However, the risks of insider betting on event and wagering integrity should be highly concerning to all. It certainly is to us.

“We will continue to work with gaming operators, the OLG, iGaming Ontario and UFC to ensure that wagering on UFC events meets the AGCO’s Standards.”

On Friday, Alberta became the second province to put a stop to UFC wagering, according to TSN.

The move by the AGCO to halt wagering on UFC events comes in response to reports of alleged betting by UFC insiders and suspicious betting patterns on a fight last month in Las Vegas.

U.S. Integrity, a Las Vegas-based firm that monitors the betting market, launched an investigation after it received reports of suspicious wagering on the Nov. 5 bout between Shayilan Nuerdanbieke and Darrick Minner. Hours prior to the fight, odds soared on Nuerdanbieke to win by first-round knockout and the bout to go under the total of 2½ rounds.

Nuerdanbieke won by technical knockout at 1:07 of the first round. It is believed that information about Minner’s left knee being injured leaked out and caused the lines to move.

“Our Enforcement Division is aware of the information and reports pertaining to the reported suspicious betting on last month’s UFC fight between Darrick Minner and Shayilan Nuerdanbieke. However, at this time the Nevada Gaming Control Board has no further comment,” it said in a statement.

Minner’s coach for the fight was James Krause, who offers his mixed martial arts betting tips on a podcast and Discord channel.

The UFC said in a statement Friday that the Nevada State Athletic Commission suspended Krause’s license Nov. 18 pending an investigation into the Nuerdanbieke-Minner fight.

Fighters who continue to be coached by Krause or train at his gym will not participate in UFC events until the investigations are completed, the UFC said.

Minner also has been released from the organization.

“Along with the safety and health of its fighters, UFC believes there is no more important component of professional mixed martial arts than the integrity of the sport,” UFC said in a statement Friday. “UFC will continue to take all necessary and appropriate steps to ensure compliance with and enforcement of its policies and those of the jurisdictions in which it operates.”

The AGCO statement said “the UFC does not prohibit all insiders from betting on UFC events, which could include an athlete’s coaches, managers, handlers, athletic trainers, medical professionals, or other persons with access to non-public information.”

In a formal memo to fighters and managers sent in October, the UFC announced changes to its fighter code of conduct policy to prohibit fighters and defined “insiders” from wagering on UFC fights.

The next UFC event is scheduled for Saturday at Amway Center in Orlando, Florida, and features a main event between welterweights Kevin Holland and Stephen Thompson.

Westgate SuperBook continues to list odds for the card, as does Circa Sports, Station Casinos and other Las Vegas sportsbooks.

“We’re moving forward, business as usual, but we’re certainly keeping an eye on the fights maybe a little closer than we have in the past,” SuperBook vice president Jay Kornegay said. “We haven’t seen any red flags that would indicate it’s a widespread problem.

“UFC is the fastest-growing betting sport we have. Certainly, we want to keep it on the board. But more importantly, we’ve got to make sure everything is true and fair.”