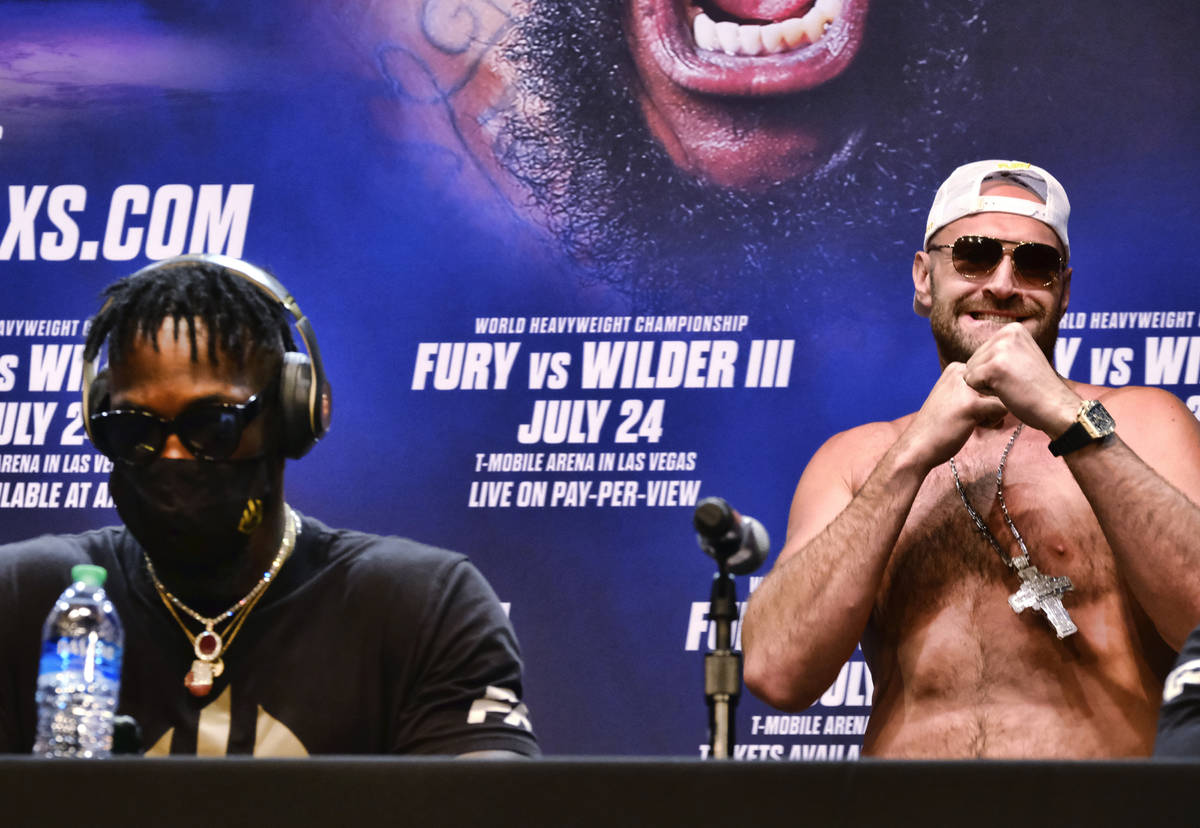 WBC heavyweight champion Tyson Fury, right, raises his fists as he walks near Deontay Wilder at the start of a news conference in Los Angeles on Tuesday, June 15, 2021, for the scheduled July 24 boxing bout in Las Vegas. (AP Photo/Richard Vogel)

The trilogy fight between WBC heavyweight champion Tyson Fury and Deontay Wilder scheduled for July 24 at T-Mobile Arena is being postponed amid a COVID-19 breakout at Fury’s camp, multiple people with knowledge of the situation confirmed to the Review-Journal.

Fury had been training in Las Vegas and is among those who tested positive. Veteran boxing journalist Dan Rafael first reported the postponement.

An October date is likely, though nothing has been finalized. Possible September weekends conflict with other major events in combat sports, such as unified heavyweight champion Anthony Joshua’s title fight against Alexander Usyk on Sept. 25 in London. T-Mobile Arena is also hosting multiple concerts in September, along with an Alanis Morrissette show Oct. 2.

Fury (30-0-1, 21 knockouts) and Wilder (42-1-1, 41 KOs) first fought to a controversial draw in December 2018 in Los Angeles. Wilder knocked Fury down twice, including once in the 12th round. Fury outboxed Wilder for most of the fight, though, earning points by winning several rounds.

The February 2020 rematch in Las Vegas wasn’t controversial, as Fury seized control with two knockdowns — one in the third round and one in the fifth — at the MGM Grand Garden. Wilder’s corner stopped the fight midway through the seventh round amid an onslaught from Fury.

The fight’s contract featured a rematch clause, which Wilder exercised after the loss. But the pandemic prevented it from happening, and Fury’s team pursued a unification bout with Joshua, the WBA, WBO and IBF champion. A fight was announced in May for Aug. 14 in Saudi Arabia.

But an independent arbitrator ruled that Wilder was due his rematch.

Neither Wilder nor Fury has fought since their February 2020 bout.