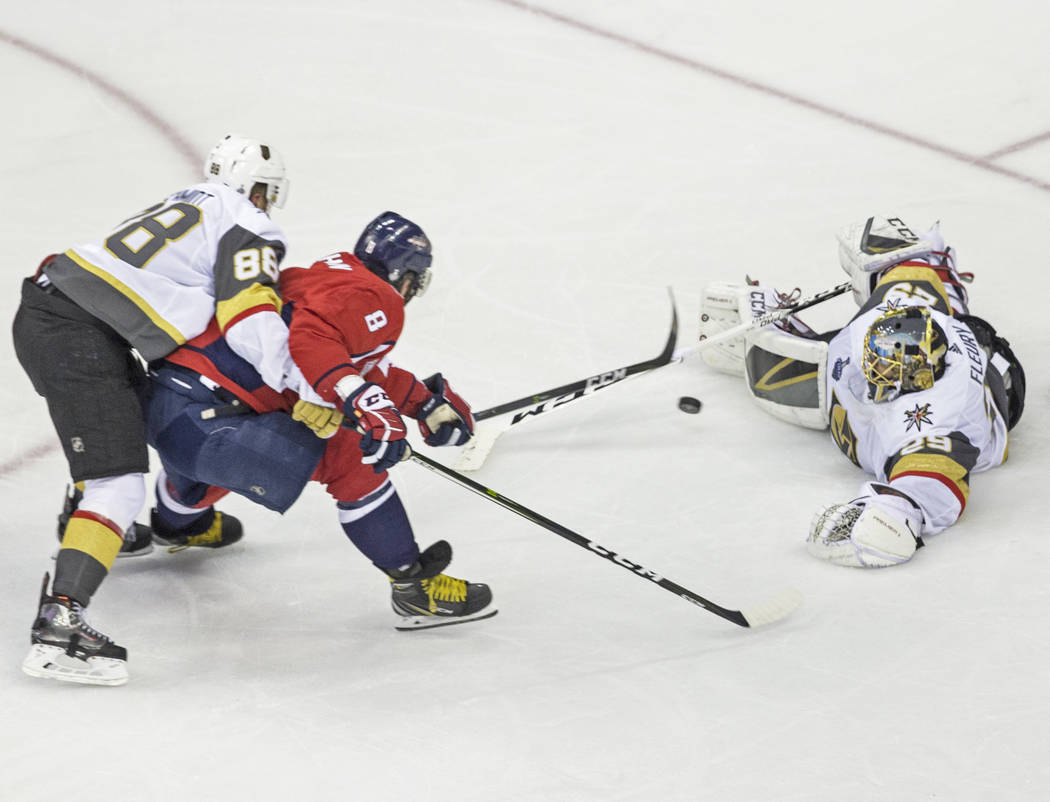 The Washington Capitals have seen to that. Whether its pouncing on mistakes and creating odd-man opportunities or dominating on special teams, the Capitals have pounded the Golden Knights’ goaltender.

Washington has averaged four goals against Fleury in the Stanley Cup Final and put a half-dozen behind him in Game 4 Monday in a 6-2 win at Capital One Arena. In the 15 previous playoff games, Fleury allowed 27 goals, less than two per game.

The Capitals are seeking their first championship and can win the Cup on Thursday at T-Mobile Arena after taking a 3-1 lead in the best-of-seven series.

“Obviously as a goalie you don’t want to get scored on,” Fleury said. “It’s never a good feeling. But it’s a team game. I know the guys are trying hard out there to help me out. We have to find a way to make it work.”

Fleury, who said he is not tired, has held up well for stretches while playing every second during the series. But after the Knights failed to convert early and the Capitals scored on a power play midway through the first period, things quickly turned sour for the goaltender and his team.

“I thought we had a good start, put some pressure, hit the post a couple of times,” Fleury said. “They came back and they got that power-play goal and some quick goals in the first.”

Two goals in a 3:13 span late in the period put the Capitals up 3-0. They finished with only 23 shots on goal but made the most of those chances as six different players solved Fleury in Game 4.

However, Washington’s top players, Evgeny Kuznetsov, Nicklas Backstrom and Alex Ovechkin, had a hand in all six goals despite not scoring. Kuznetsov had four assists and Backstrom had three. Ovechkin added an assist.

“They’re playing better defensively,” Fleury said of the Capitals. “They feed their offense through it. When they get the puck, they have a quick transition, getting some odd-man rushes and good offense that way.

“We had a few chances, but if you’re giving up six, it’s hard to win.”

“No. I think at least five of the six goals were wide-open nets,” Gallant said. “There was nothing he could have done.”

The Knights said they can’t continue to take penalties, fail to pick up Washington’s forwards skating free deep in the offensive end and keep hanging Fleury out to dry.

“Obviously, we have the best goalie in the league,” center Pierre-Edouard Bellemare said. “He’s been carrying us all year long and we feel like the goals he’s letting in, there’s not much he can do on those. So we have to assess what we did wrong. We have to be better.”

Fleury said the message will be clear heading into Game 5 on Thursday.

“We’re going home,” he said. “We’ve had success there. We just have to focus on one period at a time, play our game and see where it takes us.”

“We’re not where we want to be, that’s for sure. But we have a good bunch of guys, a lot of character in the room and nobody’s quitting.”