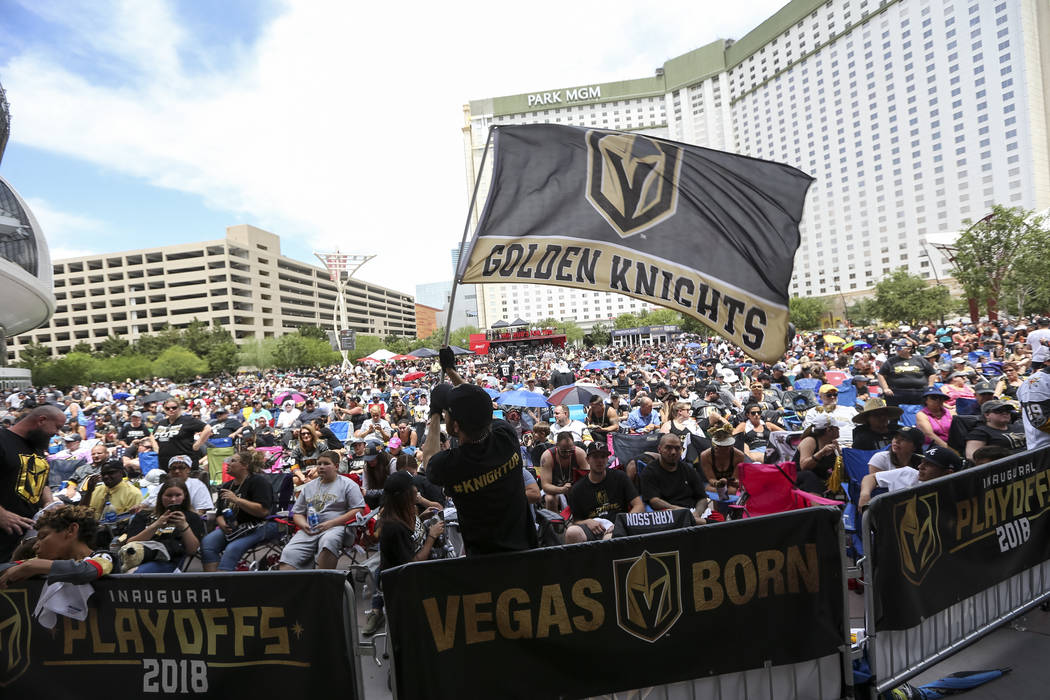 Golden Knights fans during a watch party for Game 5 of the Western Conference Finals between the Golden Knights and the Winnipeg Jets at Toshiba Plaza in Las Vegas on Sunday, May 20, 2018. Richard Brian Las Vegas Review-Journal @vegasphotograph

Whether they win or lose the Stanley Cup Final, the Golden Knights can expect a hero’s welcome at the end of their first season.

Clark County Commission Chairman Steve Sisolak said he’s been in talks with the hockey team’s marketing department since last week to coordinate “some type of appropriate celebration” for the Knights. The Knights host the Washington Capitals on Monday to kick off the best-of-seven series that will crown the NHL champion.

“We just need to determine what it will be,” Sisolak said. “Hopefully they win the Stanley Cup and we close the Strip to parade them up and down.”

Sisolak and Las Vegas Mayor Carolyn Goodman agree that a parade should be held if the Knights clinch the cup. However, details are scant right now.

When a parade would be held depends on how many games the Stanley Cup Final series goes. A potential parade route is also in question.

Goodman said she envisions the parade starting inside city limits before heading south on Las Vegas Boulevard toward the Strip.

“The right place for it to begin is in the downtown corridor somewhere,” she said. “It would seem to me where it would end up would be T-Mobile (Arena).”

Goodman said she has reached out to downtown casino owner Derek Stevens, whose Downtown Las Vegas Events Center has hosted massive away game watch parties during the playoffs, to talk possible victory celebrations. She could see a number of agencies and resorts involved in planning a potential victory parade, including the Las Vegas Convention and Visitors Authority and the casinos that line the Strip.

“My hope would be — and there will be so many festivities — we all work together, the entire Southern Nevada area, led by the wishes of the Golden Knights,” Goodman said. “There may be several parades. We each want to do something and it should be top quality.”

Whatever is decided on to cap this unprecedented success, Metropolitan Police Department spokesman Larry Hatfield said police will have no problem keeping the celebrations safe.

“The planning phase has begun, and we’re excited to see the Golden Knights in the Stanley Cup,” Hatfield said. “The LVMPD has experience in planning events like this and will be prepared.”