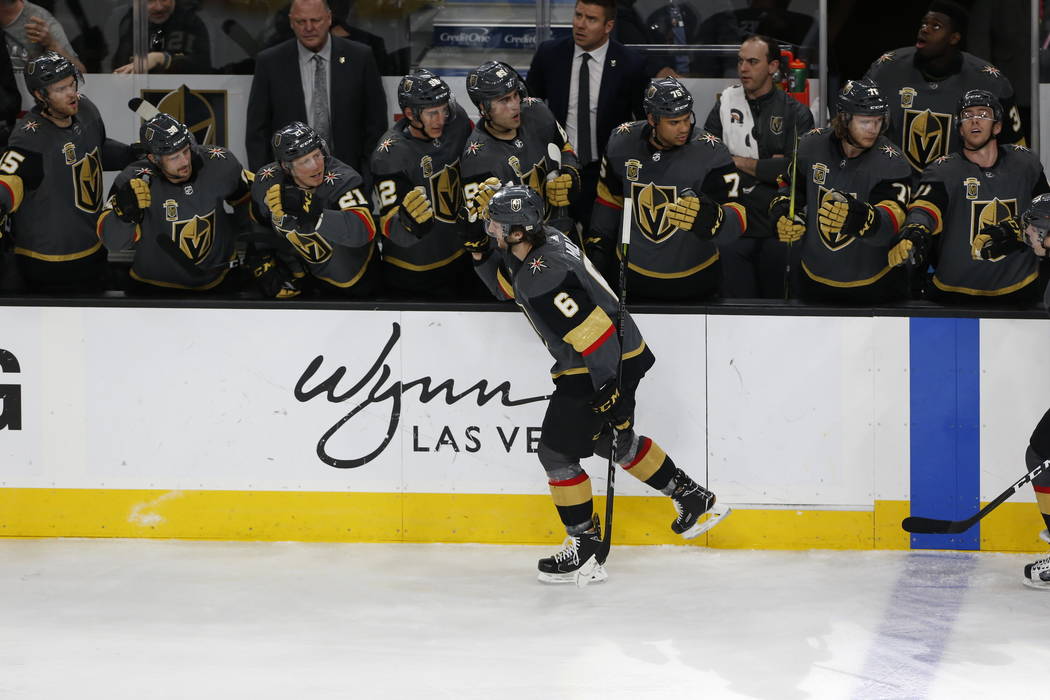 Miller, who leads the team’s defensemen in scoring and possesses a lethal point shot, has been encouraged to shoot more by coach Gerard Gallant. His second-period power-play goal broke a scoreless tie against the Calgary Flames and ignited the Knights on Sunday at T-Mobile Arena.

William Karlsson took it from there, recording a natural hat trick as the Knights went on to defeat the Flames 4-0.

“I think that’s something we’re always working for,” said Miller, who got his 10th goal when he took David Perron’s pass at the center point and unleashed a slap shot 5:33 into the period while Calgary’s Dougie Hamilton was off for tripping. “I was lucky to get one to go in (Sunday).”

Miller has been used in different areas on the power play but seems to prefer being at the blue line rather than the faceoff circles.

“I’ve played there more,” Miller said of being at the point. “But I don’t think it really matters. It’s kinda good to have a mix of the guys. It keeps the opposition guessing.”

Gallant was obviously happy to see Miller heed his advice.

“We like it when he’s shooting the puck, and that goal was the result of a simple play,” Gallant said of the passes between Miller and Perron. “It’s basic hockey that was executed well.”

Old gang is back

Gallant decided to return James Neal to his old line with Erik Haula and Perron after Neal started the game skating on the first line with Karlsson and Jonathan Marchessault.

Neal assisted on Karlsson’s first goal after making a good defensive play in the neutral zone, finding some room in the Calgary end, then dishing it to Karlsson.

Tomas Tatar, who started the game with Haula and Perron, was moved up to play with Karlsson and Marchessault.

“When things aren’t going well, sometimes you need to change things up,” Gallant said. “Obviously, Neal has played with those guys, so it was an easy switch to make and it worked out fine.”

Ryan Reaves’ second-period hit on the Flames’ TJ Brodie swung the momentum in the Knights’ favor. The Calgary defenseman did not return after the big hit, which came 2:59 into the period.

Center Pierre-Edouard Bellemare played in his 300th career NHL game Sunday. The 33-year-old from France has five goals and 14 points in 63 games.