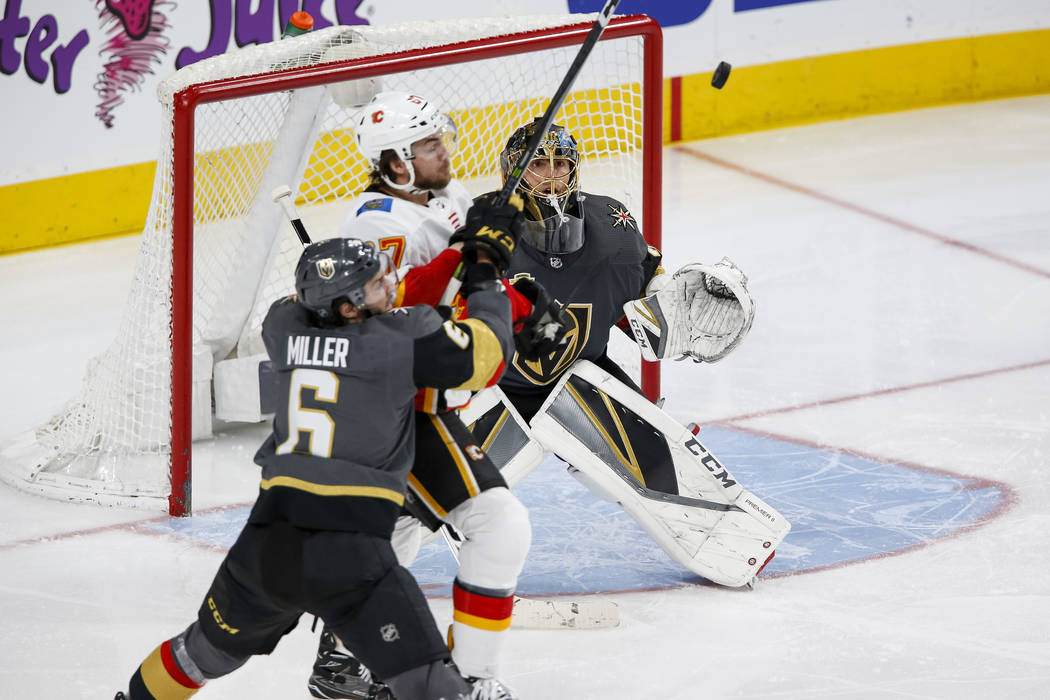 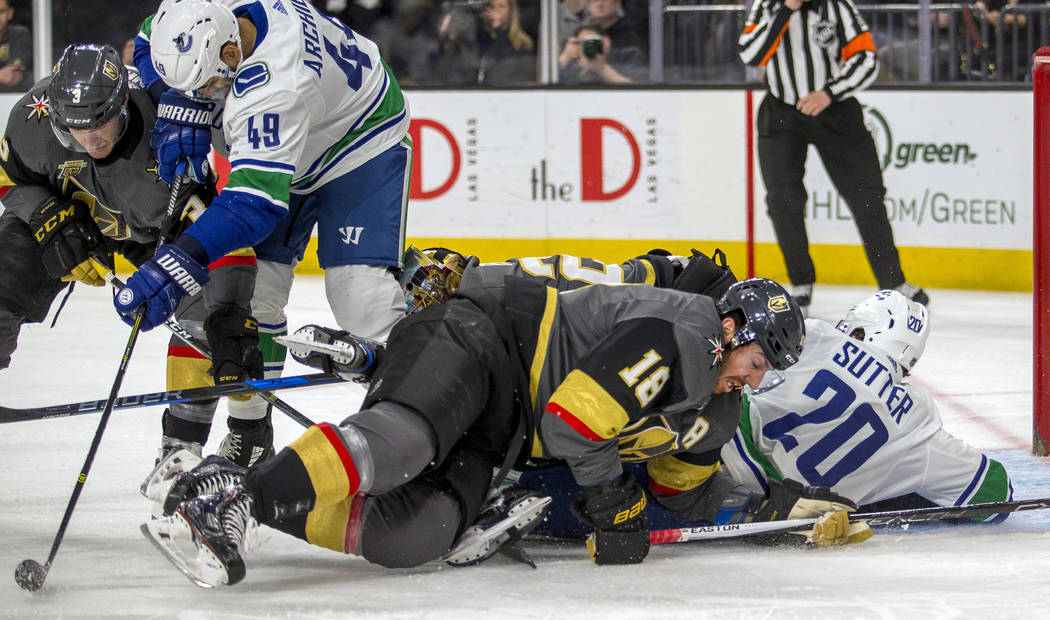 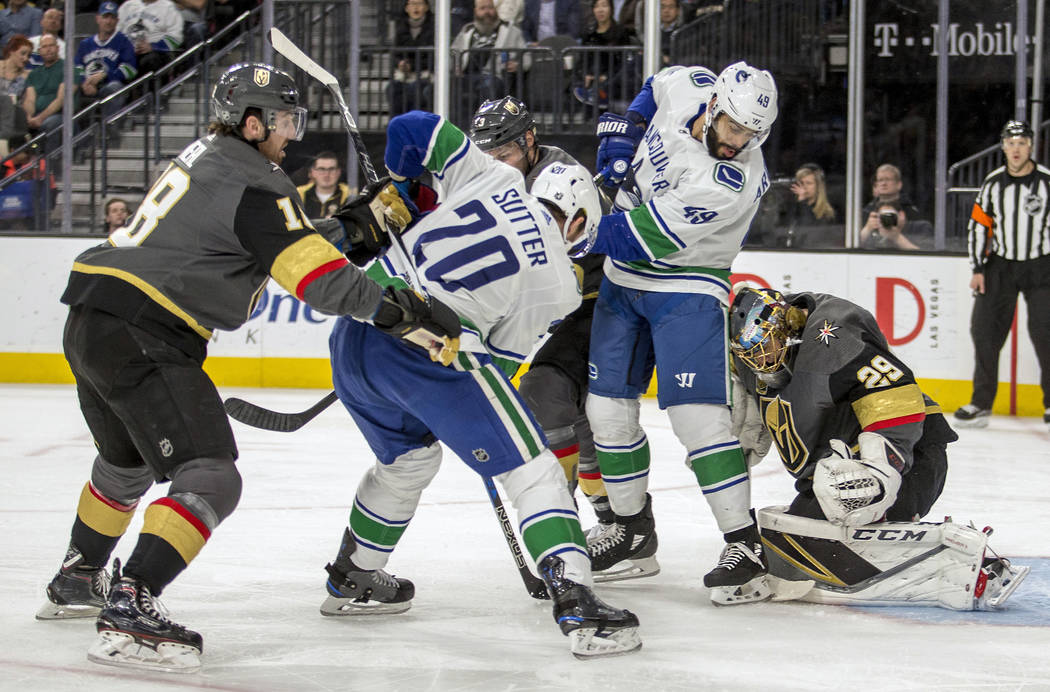 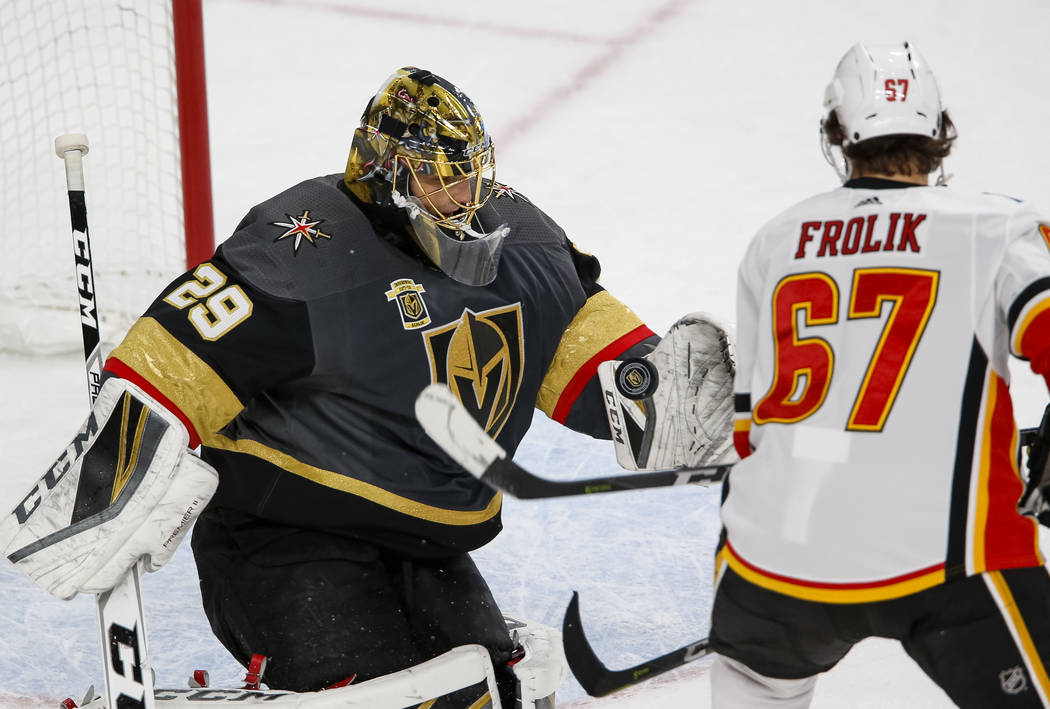 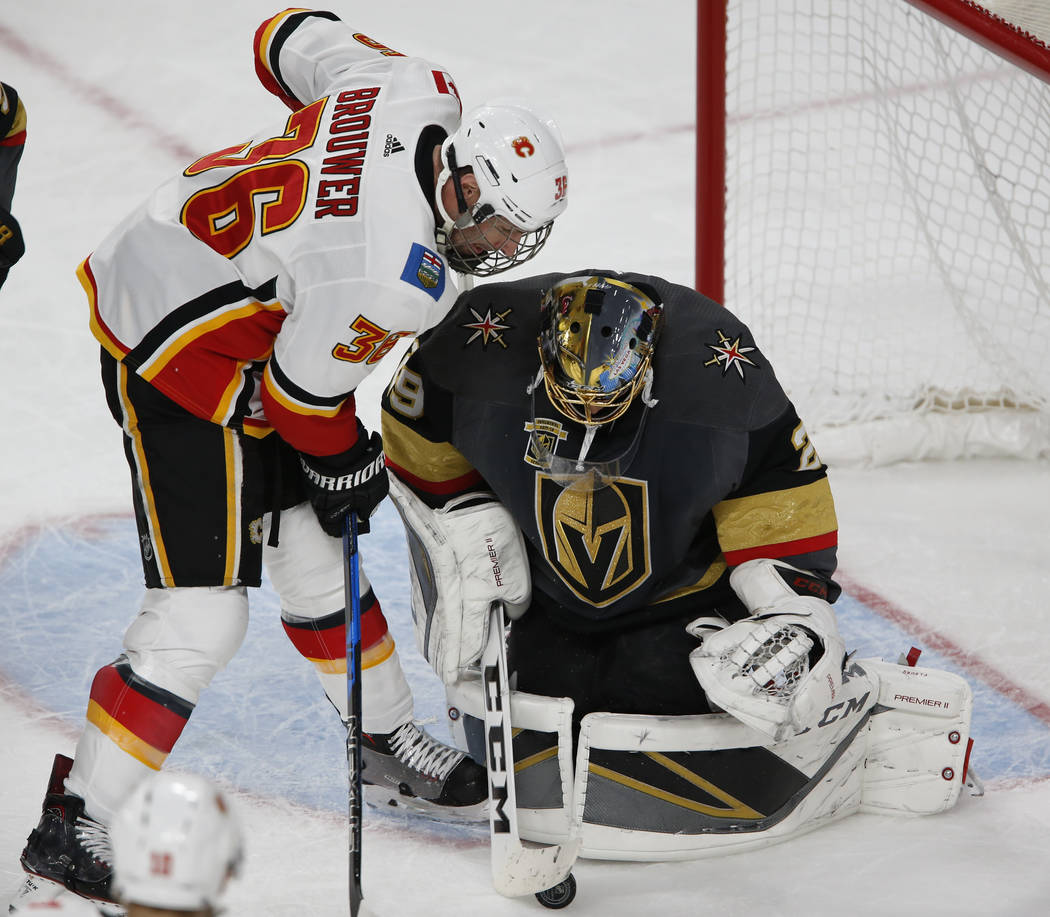 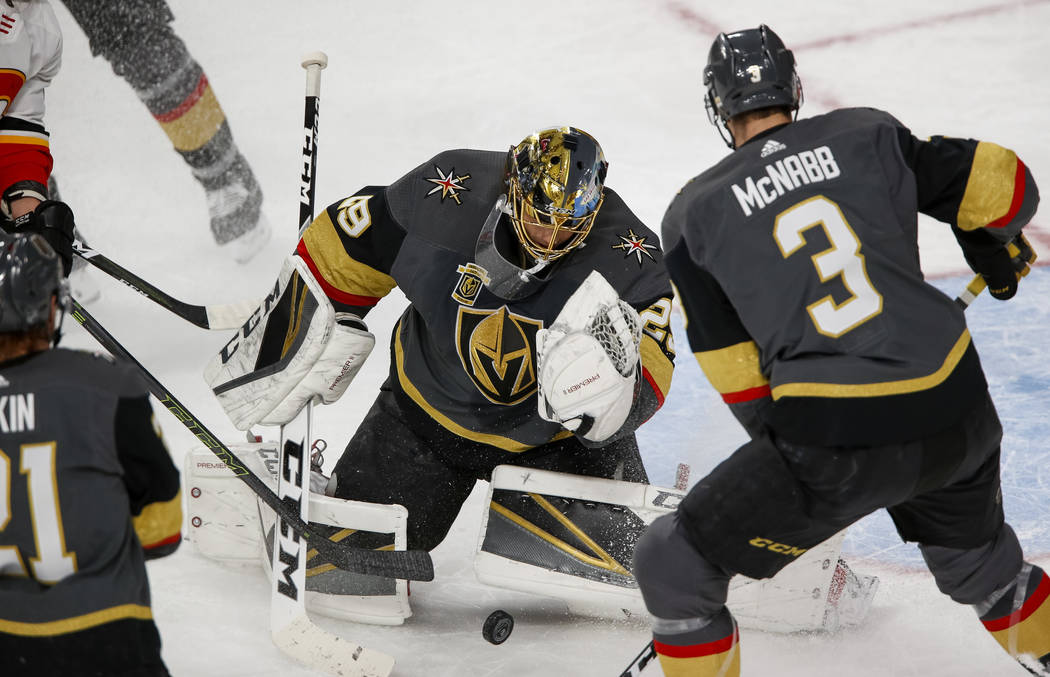 Vegas Golden Knights goaltender Marc-Andre Fleury (29) looks to grab the puck as defenseman Brayden McNabb (3) stands by during the first period of an NHL hockey game between the Golden Knights and the Calgary Flames at the T-Mobile Arena in Las Vegas on Sunday, March 18, 2018. Richard Brian Las Vegas Review-Journal @vegasphotograph 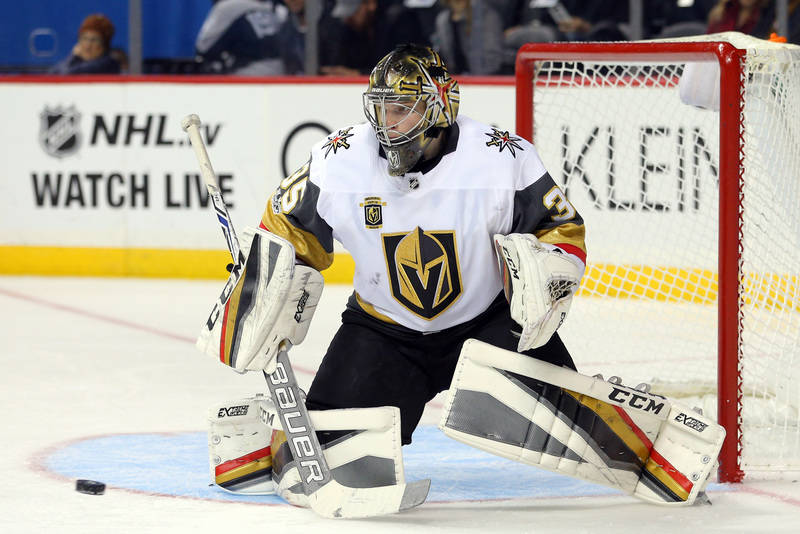 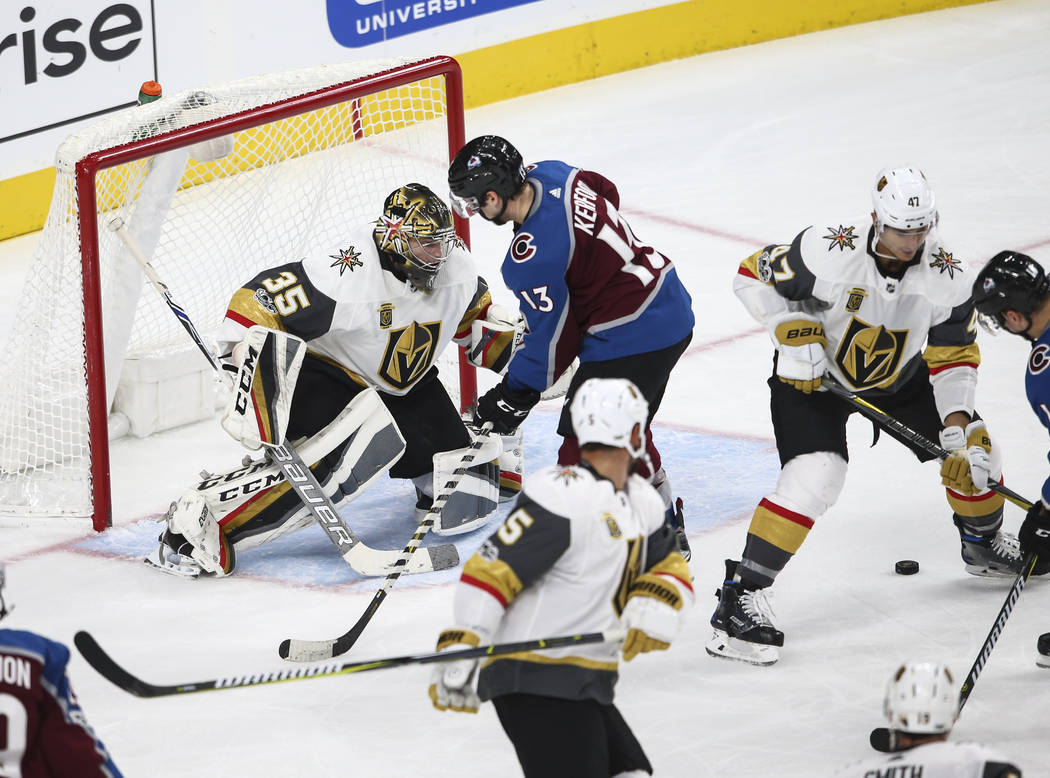 The Golden Knights already averted one goaltending crisis during the early part of the season, staying afloat in the Pacific Division before they pulled away from the pack in December.

Now, with the playoffs around the corner, it looks like they’ll have to do it again.

Hey, nobody said winning a division title would be easy, right?

Goaltender Marc-Andre Fleury, who left Tuesday’s victory over Vancouver after the first period, did not travel with the team Wednesday to San Jose, California, for the start of the Knights’ two-game road trip.

The team recalled goaltender Oscar Dansk from Chicago of the American Hockey League, a clear sign Fleury will not join the Knights (47-21-5, 99 points) for their 7 p.m. Pacific Division clash at SAP Center against the second-place Sharks (41-23-9, 91 points).

But with an eight-point lead over San Jose and nine games remaining, there’s no need to risk the health of the all-star goaltender. 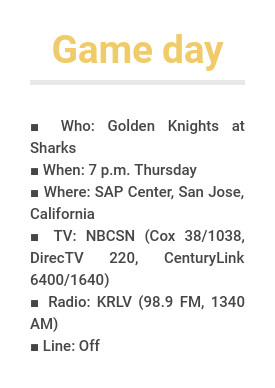 “I’m not getting into specifics about what he’s doing, but he’s not going to come today,” Knights coach Gerard Gallant said after practice Wednesday at City National Arena. “He could join us tomorrow or in the very near future.

Gallant confirmed Fleury was injured, and not being rested, when he was replaced by Malcolm Subban to start the second period Tuesday.

Fleury appeared to take a rising shot from Vancouver’s Brandon Sutter off his mask or chin guard midway through the first period. He did not return to the Knights’ bench for the final two periods.

Fleury missed 25 games after suffering a concussion Oct. 13 when he was bowled over by Detroit’s Anthony Mantha in the second period and remained in the game.

Allan Walsh, Fleury’s agent and a vocal critic of the NHL’s concussion policies, declined to speak about Fleury’s health when asked if the goaltender was going through concussion protocol.

The Knights face the prospect of relying on a rookie starting goaltender who is coming off a six-week layoff to stave off the red-hot Sharks.

Subban, who injured the middle finger on his left hand during the pregame skate Feb. 8 at San Jose, was credited with 22 stops against the Canucks in his first action since Feb. 2.

“I’m not too sure what’s going on right now, but I’m just going to be ready if I’m going to get the call,” Subban said. “As a backup, that’s your job, to make sure you’re ready at all times.”

Subban was one of the four goaltenders the Knights used when Fleury was sidelined for two months and is 11-3-1 with a 2.55 goals-against average and a .914 save percentage.

Subban made three saves in relief of Lagace during the Knights’ 5-4 overtime victory over the Sharks on Nov. 24.

Injured forward Reilly Smith was not on the ice during Wednesday’s optional practice and is not expected to be on the road trip. The update on Fleury could be the last one provided by the Knights for the foreseeable future.

“Once we get an X beside our team,” Gallant said, referring to the postseason, “you’re not going to know nothing about injuries.”