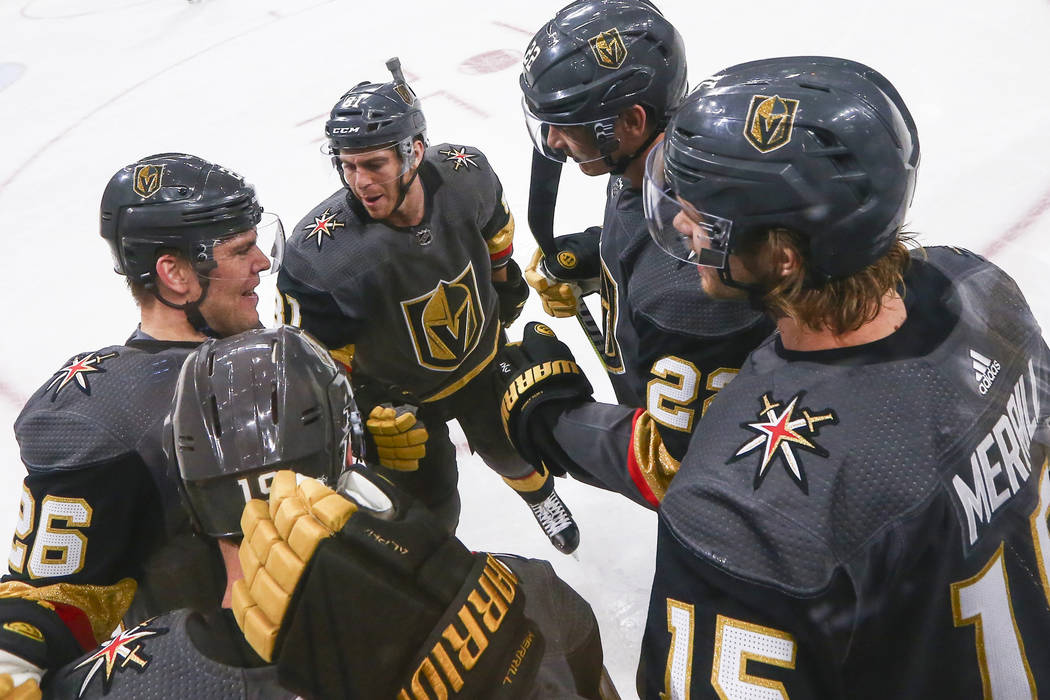 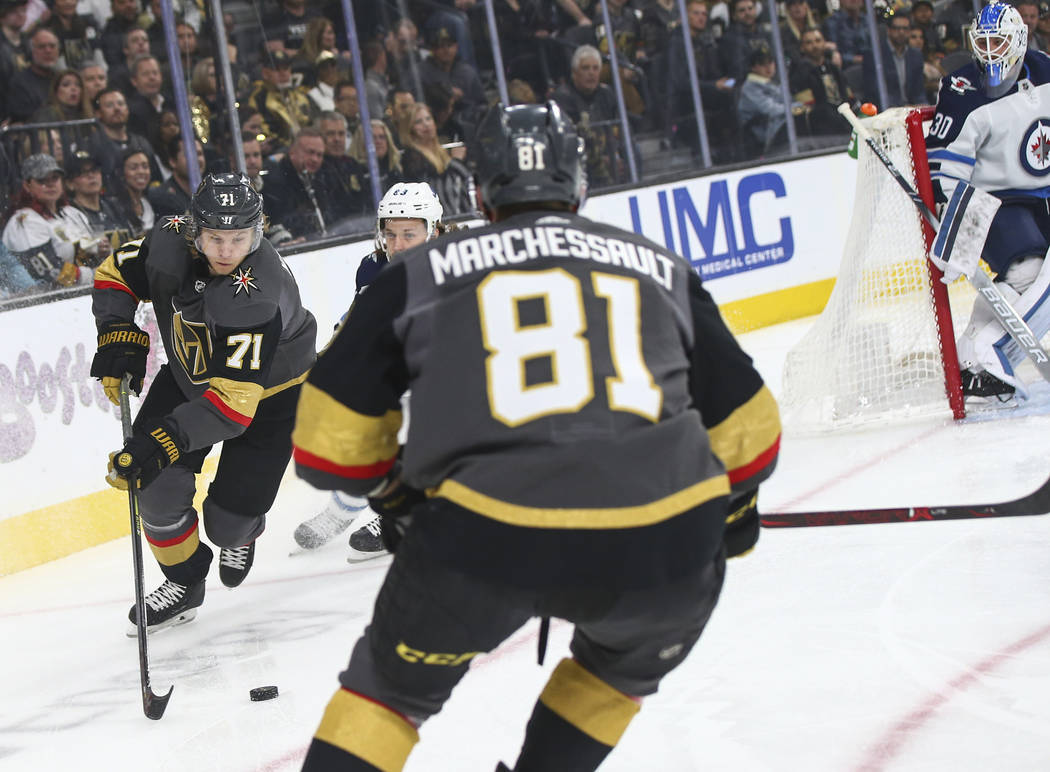 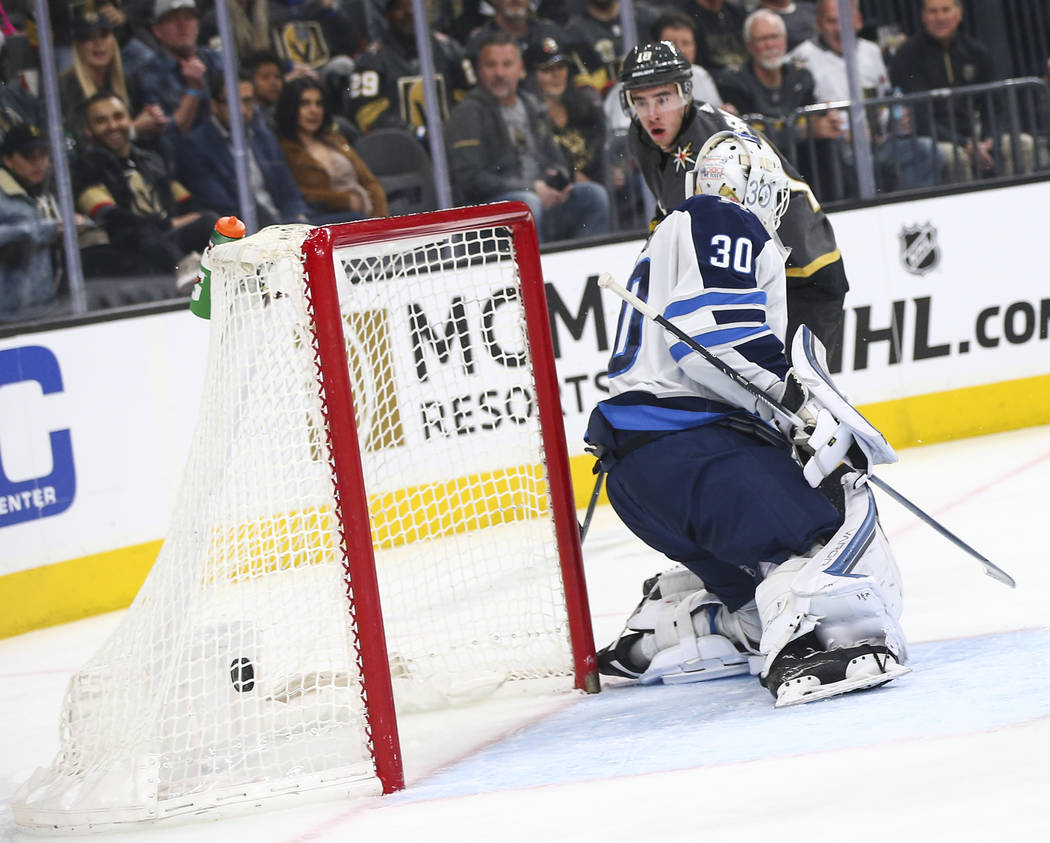 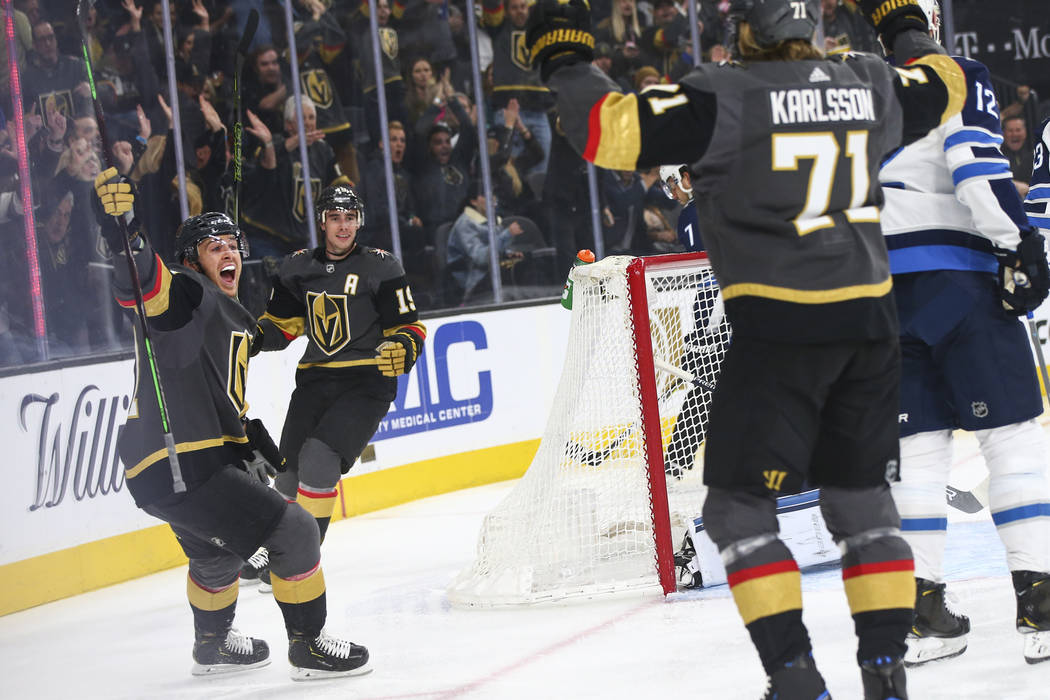 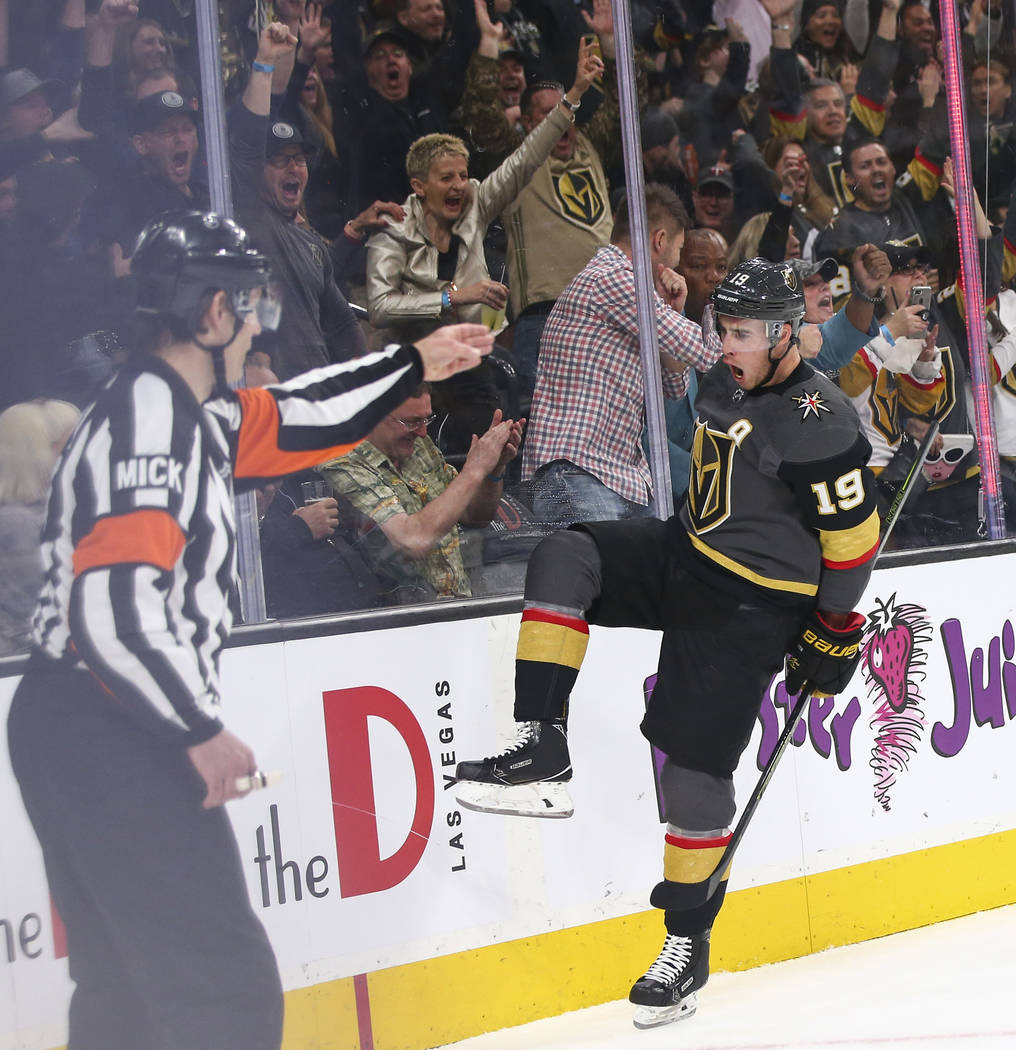 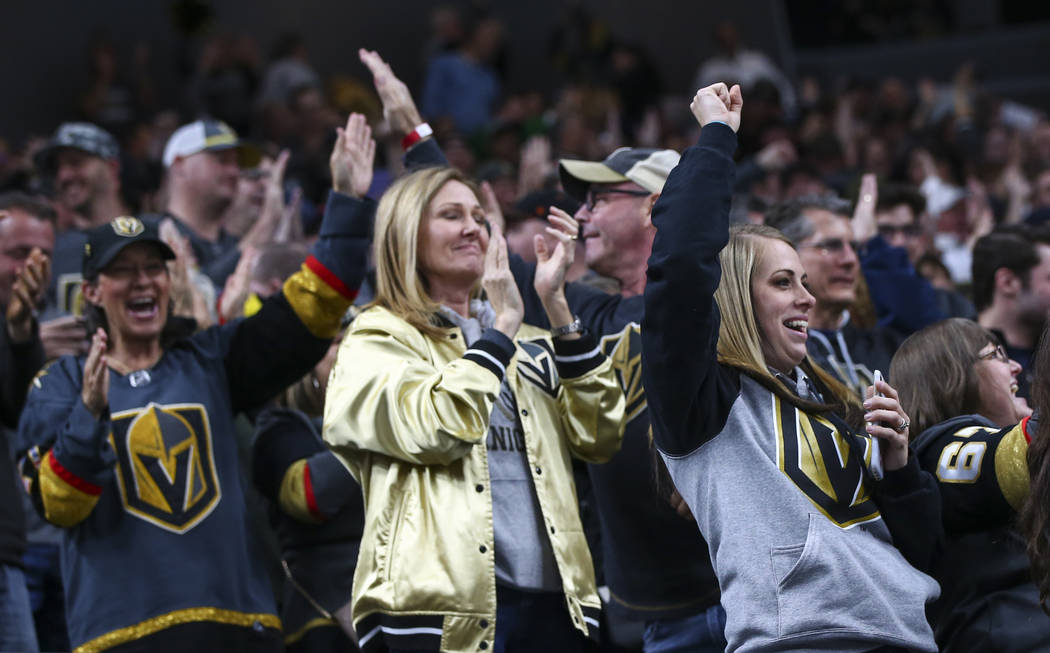 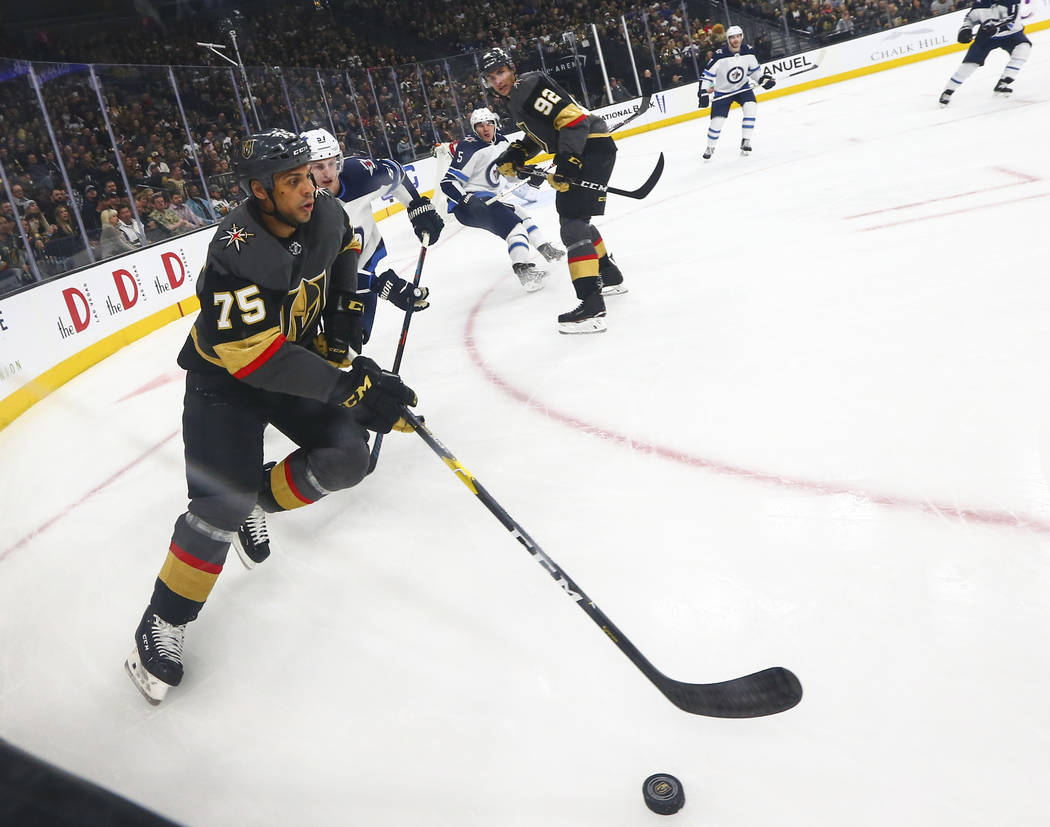 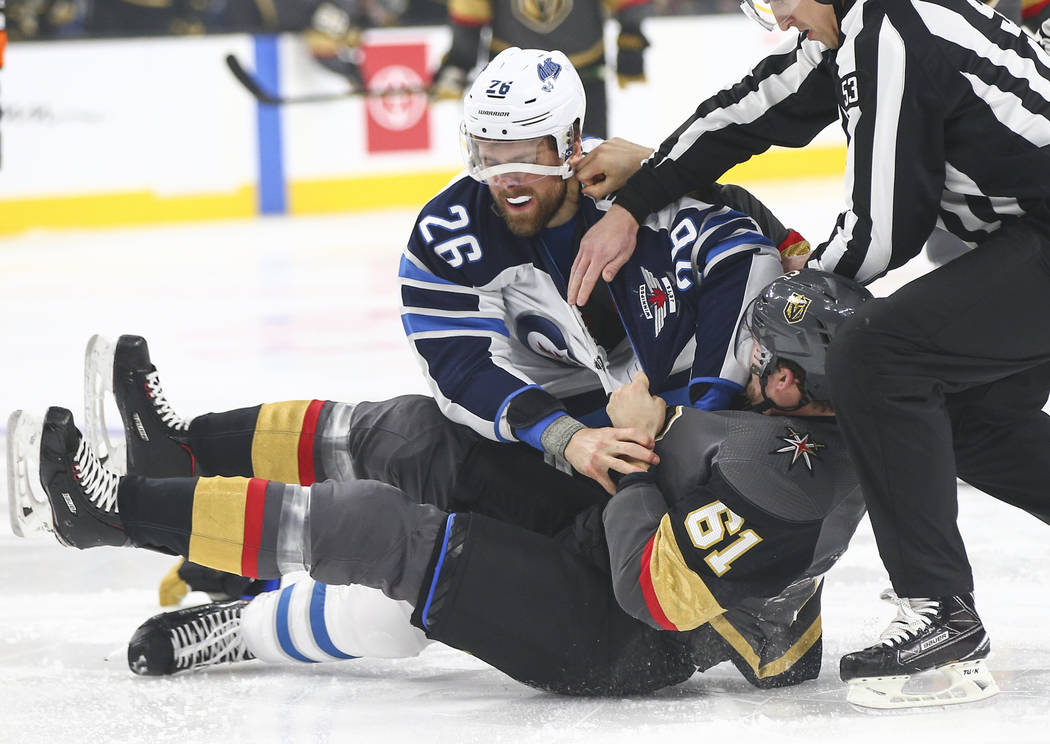 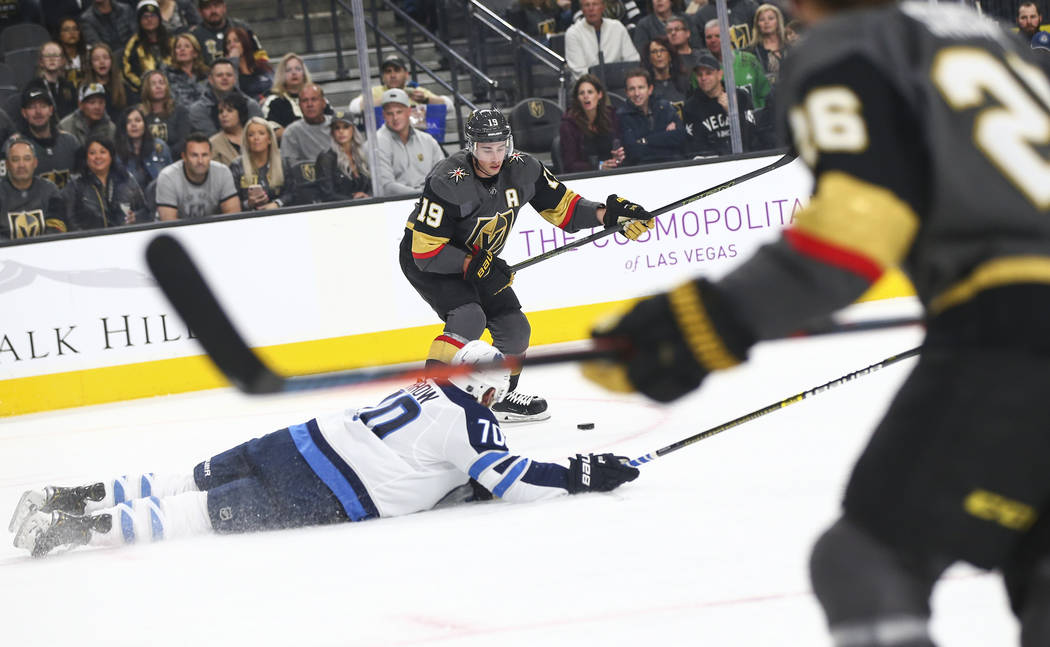 Winnipeg Jets defenseman Joe Morrow (70) falls to the ice as Golden Knights right wing Reilly Smith (19) lines up the puck to score the team's second goal against the Jets during the first period of an NHL hockey game at T-Mobile Arena in Las Vegas on Thursday, March 21, 2019. (Chase Stevens/Las Vegas Review-Journal) @csstevensphoto 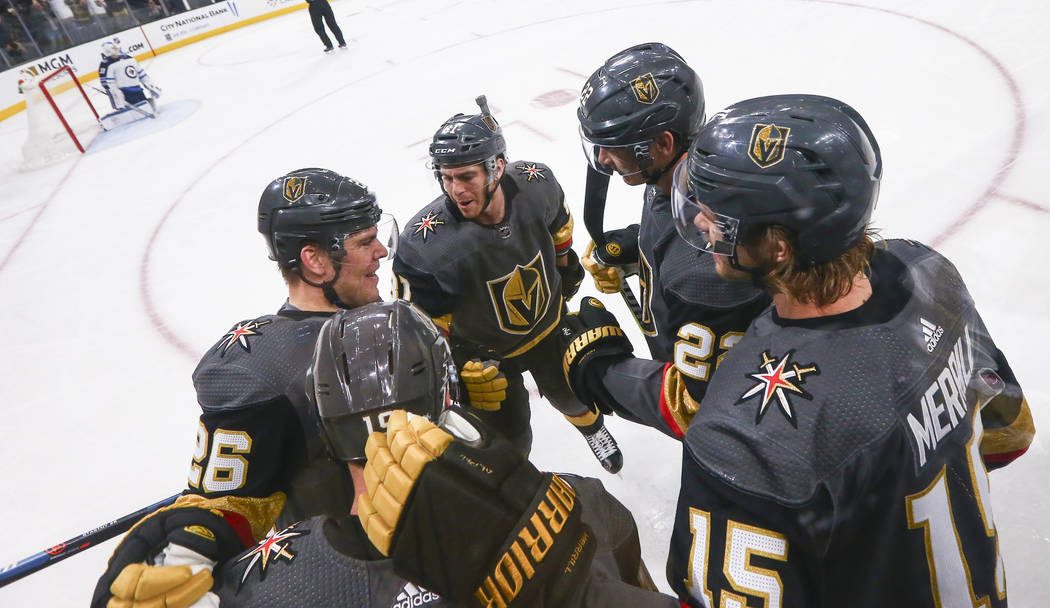 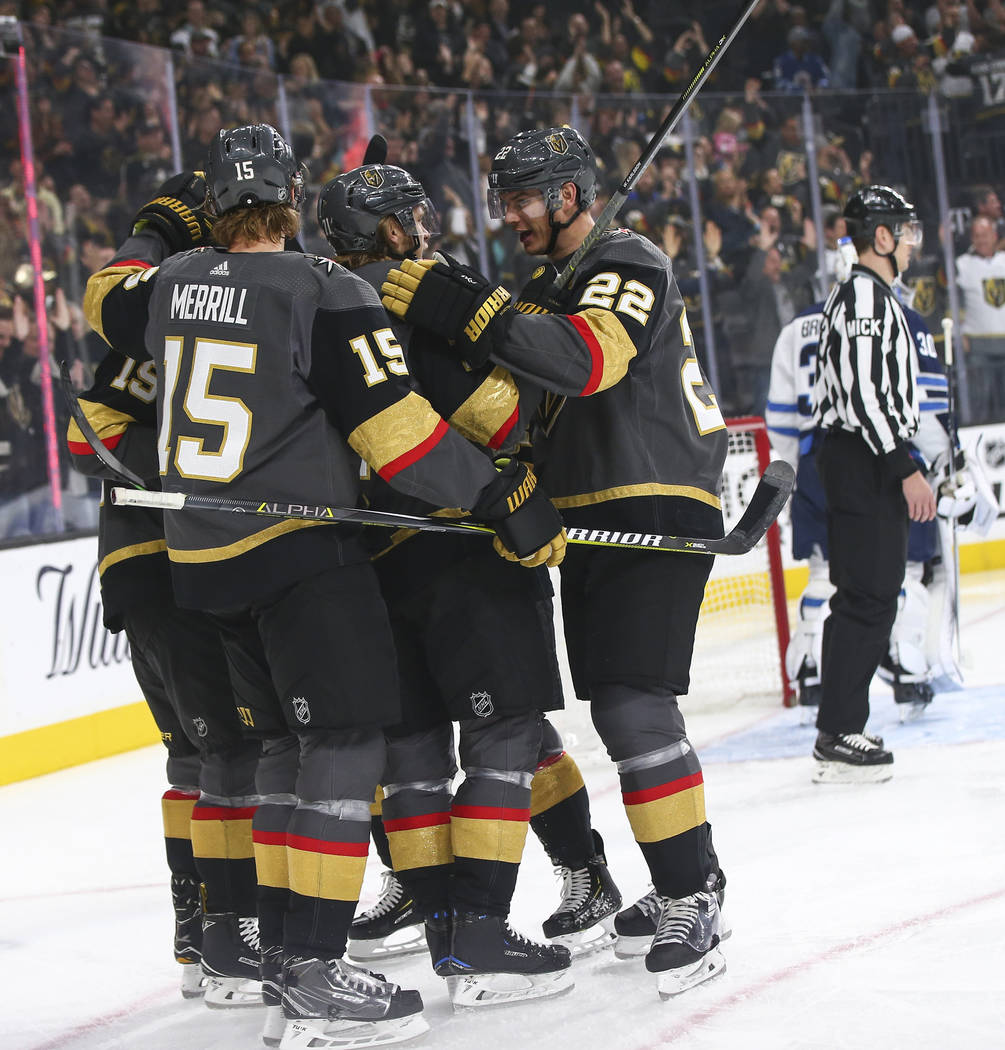 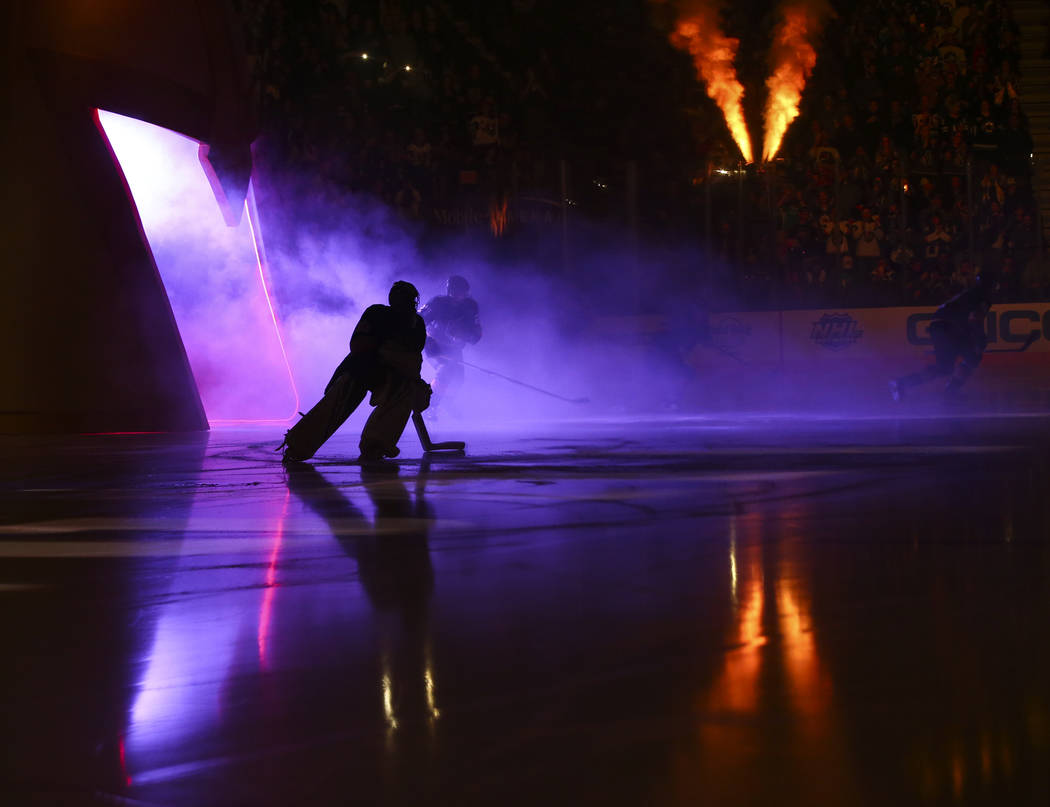 Golden Knights goaltender Malcolm Subban skates onto the ice before taking on the Winnipeg Jets in the first period of an NHL hockey game at T-Mobile Arena in Las Vegas on Thursday, March 21, 2019. (Chase Stevens/Las Vegas Review-Journal) @csstevensphoto 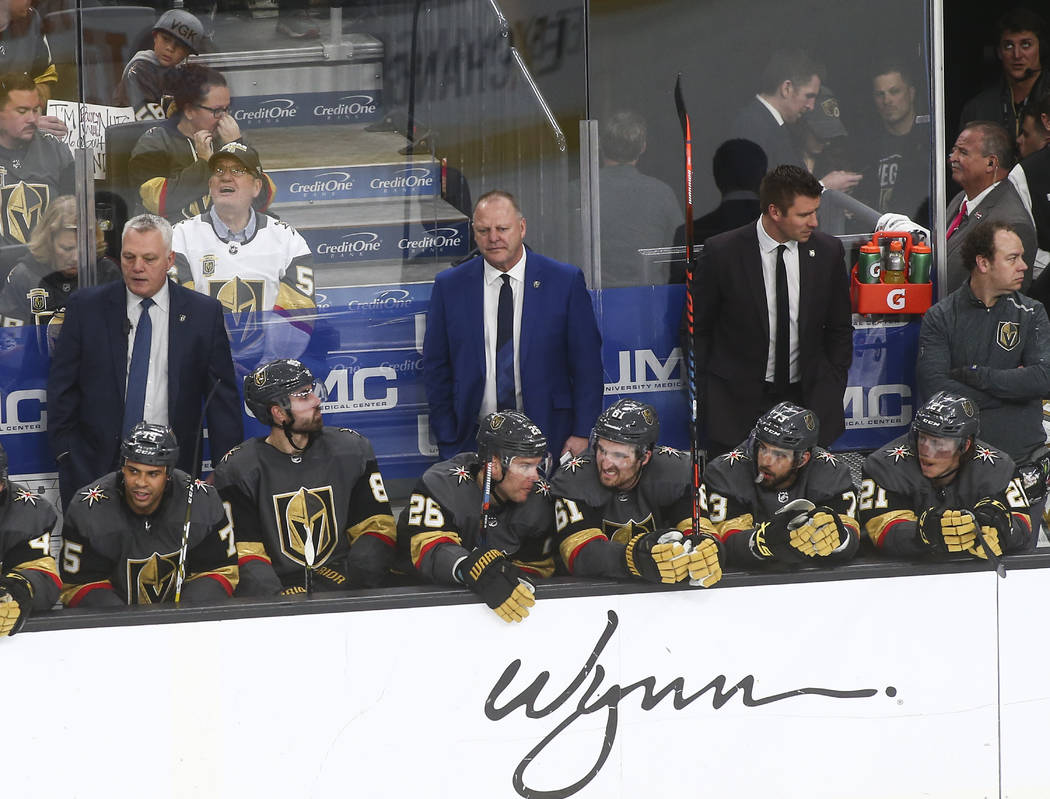 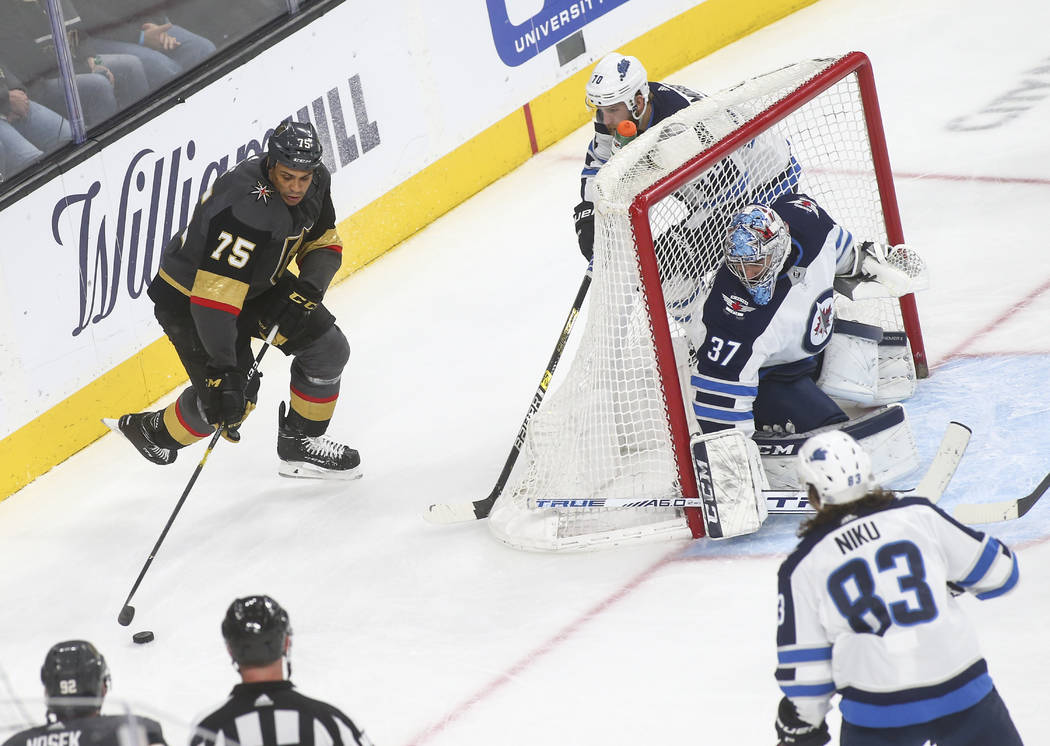 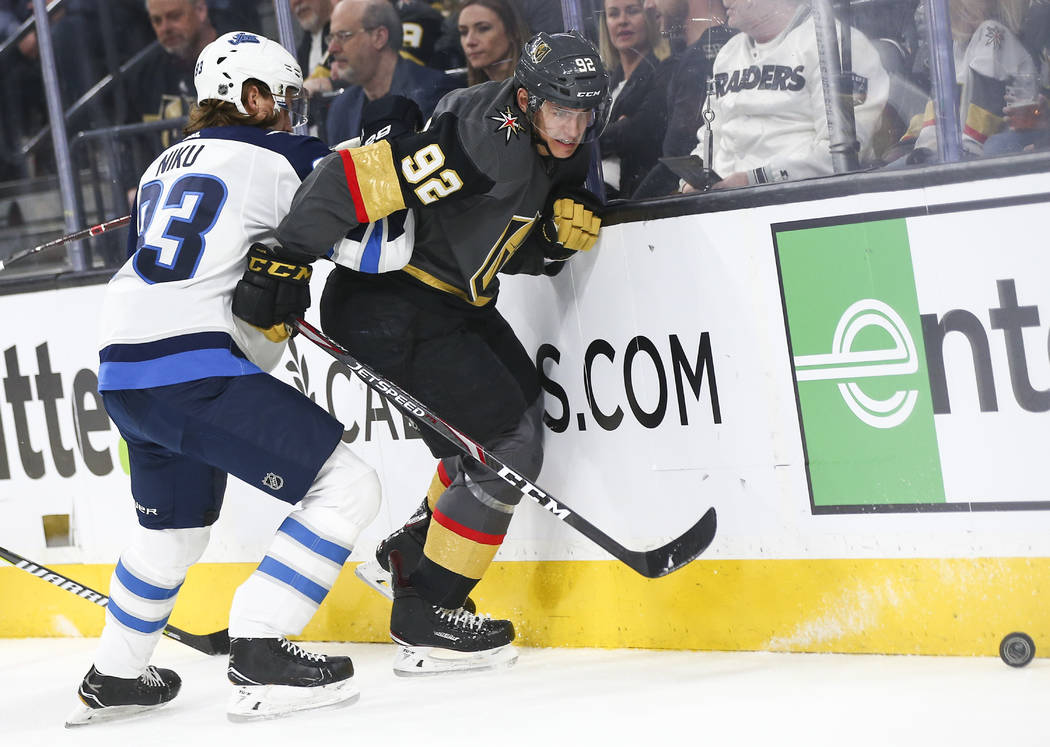 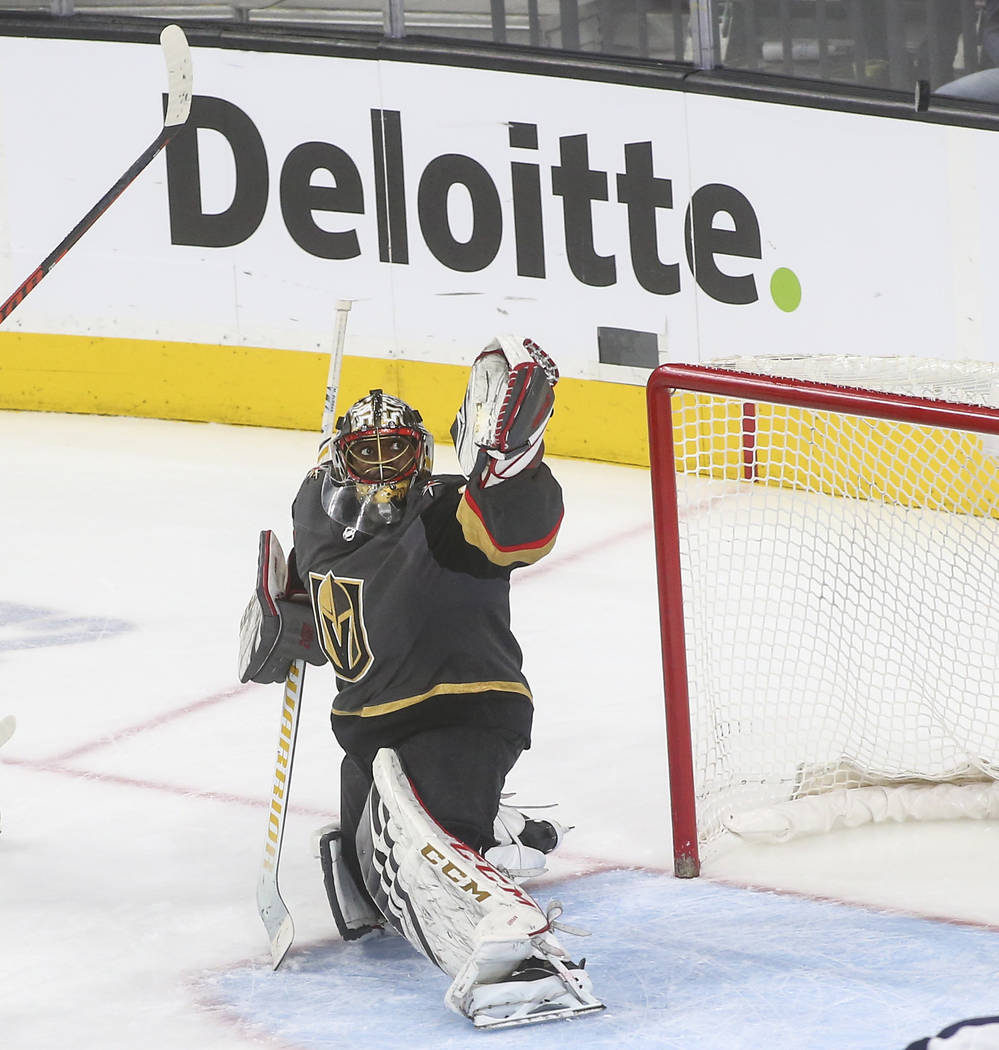 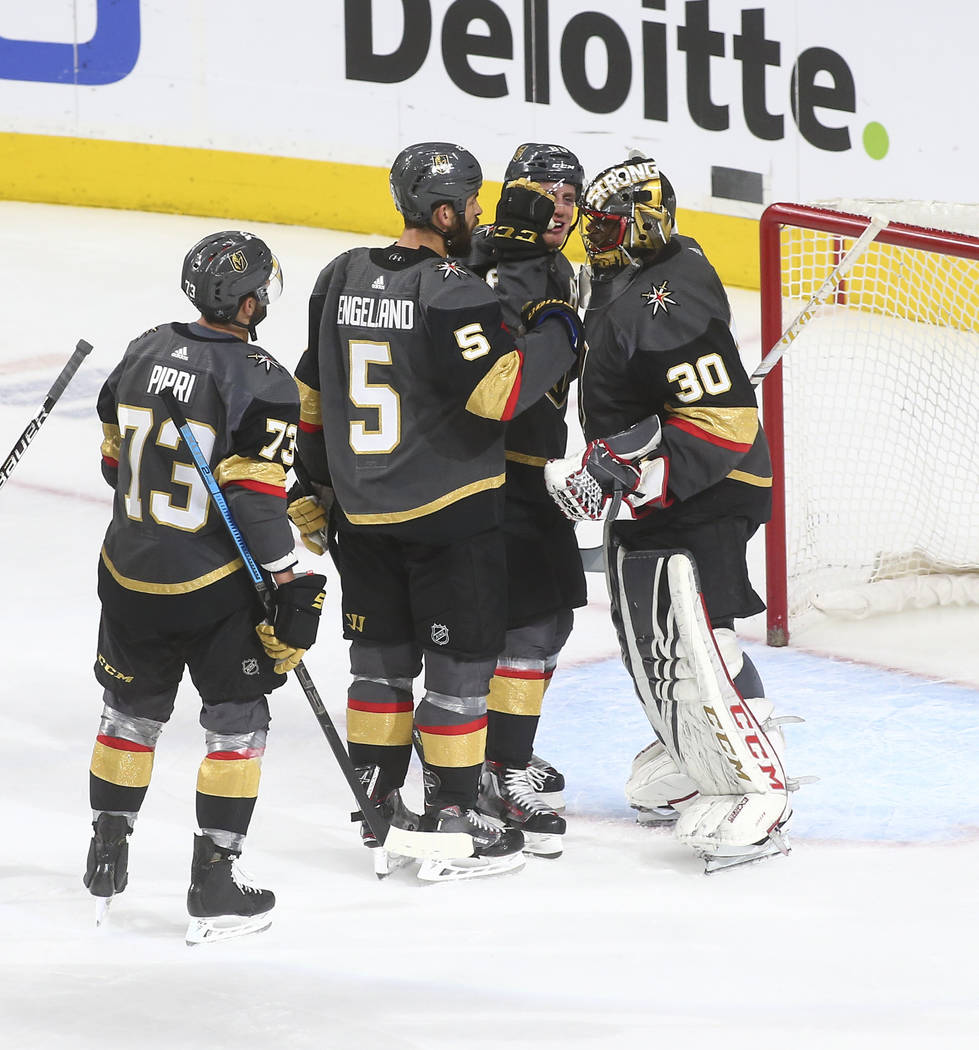 An injury to a key player this late in the season usually would serve as a major buzzkill for a contending team.

But nothing, it seems, can throw a wet blanket on the Golden Knights right now.

Goaltender Malcolm Subban delivered his first career NHL shutout as the Knights overcame the loss of left wing Max Pacioretty to roll the Winnipeg Jets 5-0 on Thursday at T-Mobile Arena.

“We’re definitely trending in the right direction right now,” right wing Reilly Smith said. “There’s a lot of positivity in this room right now, and I think the main goal for us is just to keep our foot on the gas and make sure we’re trying to get better every day.”

The Knights (42-27-5, 87 points) won their fourth straight and 10th in the past 11, lowering their magic number to clinch a playoff berth to six points.

Smith and William Karlsson netted two goals each to surpass the 50-point mark, and their line remained red hot since the trade deadline.

In the past 11 games, Smith, Karlsson and Jonathan Marchessault have combined for 15 goals and 24 assists.

Tomas Nosek added a short-handed goal in the second period for the Knights, and Paul Stastny and defenseman Nick Holden each had two assists.

The victory marked the first time in franchise history the Knights scored five or more goals in three straight games.

Pacioretty was injured with a little more than four minutes remaining in the first period when he was clipped by Jets defenseman Jacob Trouba and fell awkwardly along the boards.

Pacioretty slowly skated to the locker room and did not return.

“I haven’t heard anything yet,” coach Gerard Gallant said. “He left in the first period and the trainer said he was done for the night. So I’ll know more (Friday), I’m sure.”

The Knights lost the first two games of the season series with Winnipeg but returned the favor in convincing fashion.

Subban made his third consecutive start with Vezina Trophy candidate Marc-Andre Fleury day to day because of a lower-body injury.

He finished with 20 saves, including a key stop on Patrik Laine during a second-period power play for Winnipeg.

Subban improved to 13-1 with a 2.17 goals-against average and a .921 save percentage in 17 career appearances at T-Mobile Arena.

“We like to defend our home, defend the fortress, as we say,” Subban said. “Obviously, you always remember your first (shutout). It’s definitely a moment I’ll cherish, for sure.”

Winnipeg had its four-game win streak snapped and missed out on a chance to clinch a playoff berth.

Jets backup goaltender Laurent Brossoit allowed three goals on 18 shots before he was injured early in the second period and went to the locker room after Nosek gave the Knights a 3-0 advantage. It was Nosek’s eighth goal, topping his previous career best set last season.

“There wasn’t anything we were doing sharp or crisp,” Winnipeg coach Paul Maurice said. “We didn’t have a whole lot going tonight.”

Karlsson gave the Knights a 1-0 lead 1:25 into the first period when his backhand from a steep angle banked in off Brossoit’s skate.

Smith capitalized on a turnover by Winnipeg defenseman Joe Morrow to put the Knights on top 2-0 at 8:26 of the first. Smith faked a shot, moved around a sliding Morrow and beat Brossoit up high.

“It’s nice when the puck’s going in, obviously,” Smith said. “I think our line’s doing a good job being able to create opportunities and finish them off. We’ve gone through some droughts this season where that wasn’t the case, so it’s nice to see us finally being rewarded.”