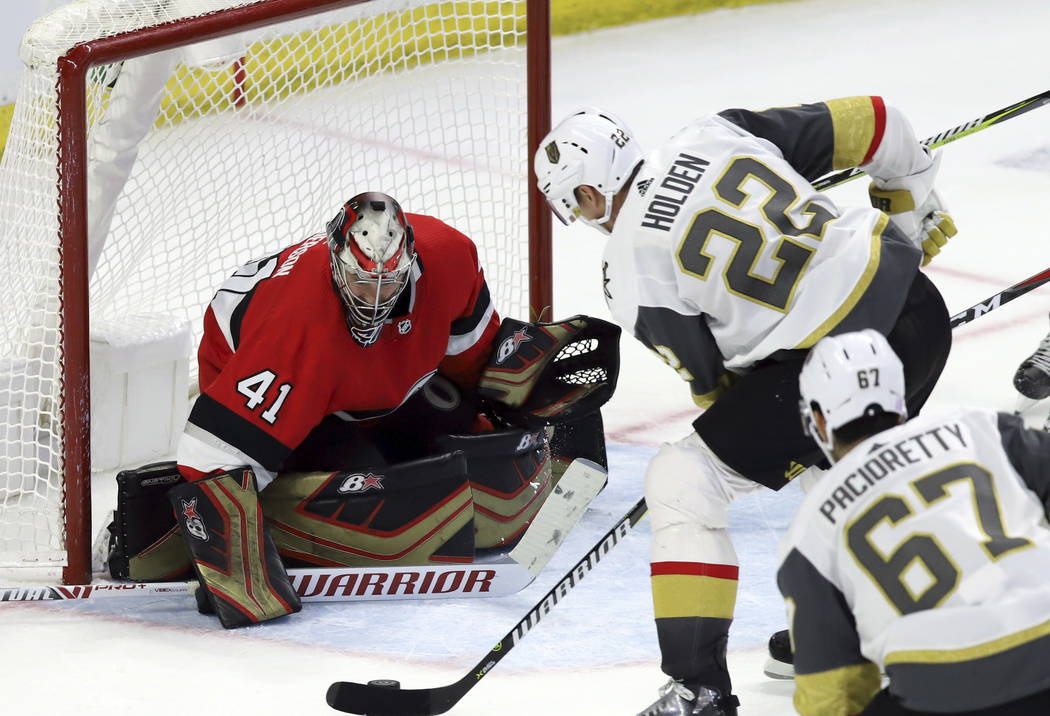 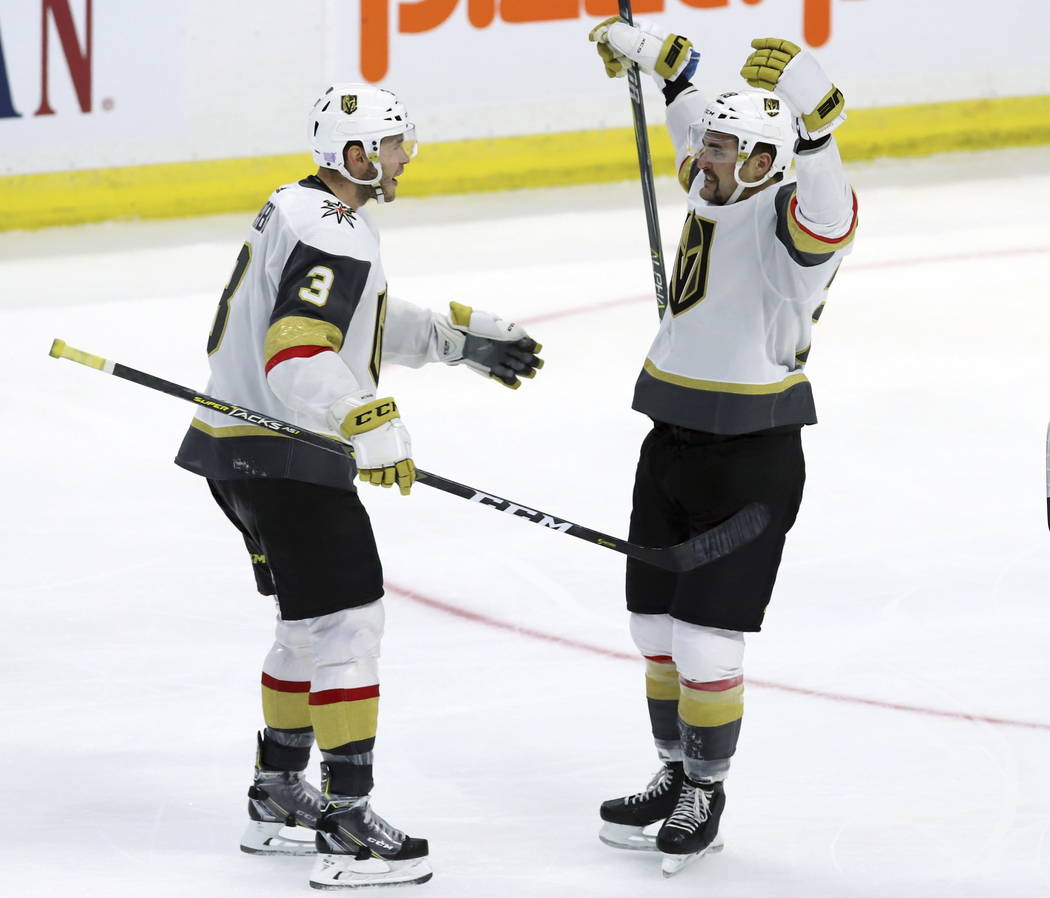 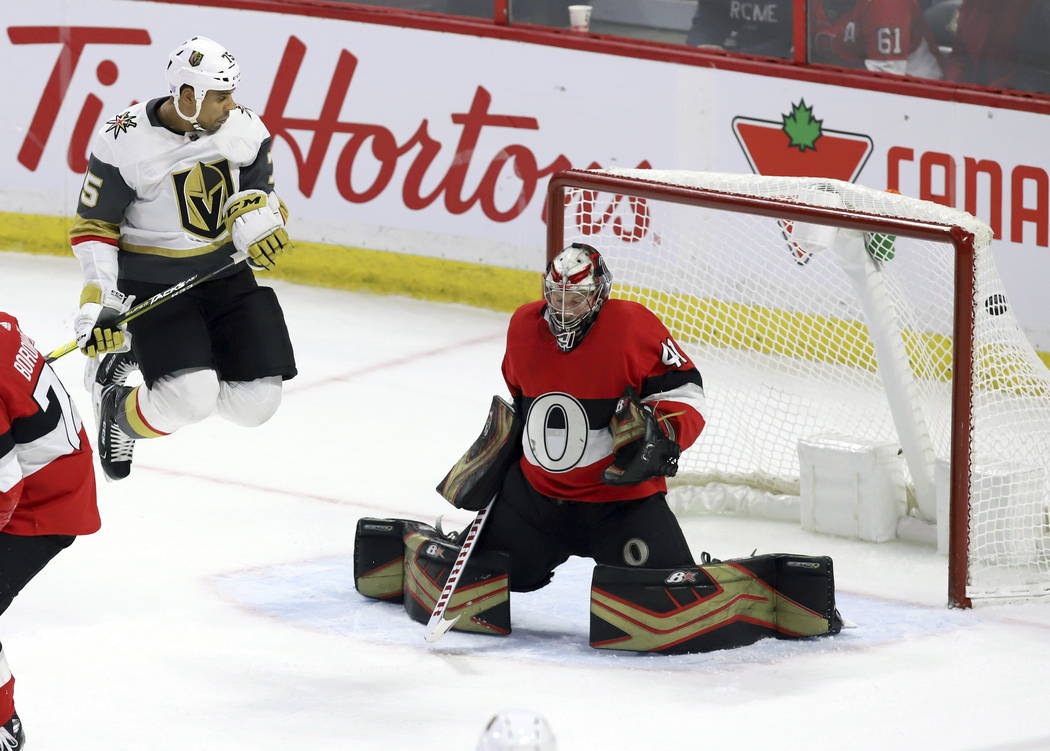 The puck gets past Ottawa Senators goaltender Craig Anderson (41) as he is screened by Vegas Golden Knights right wing Ryan Reaves (75) on a shot by Vegas Golden Knights defenseman Shea Theodore, not shown, during the first period of an NHL hockey game, Wednesday, Nov. 8, 2018 in Ottawa, Ontario. (Fred Chartrand/The Canadian Press via AP) 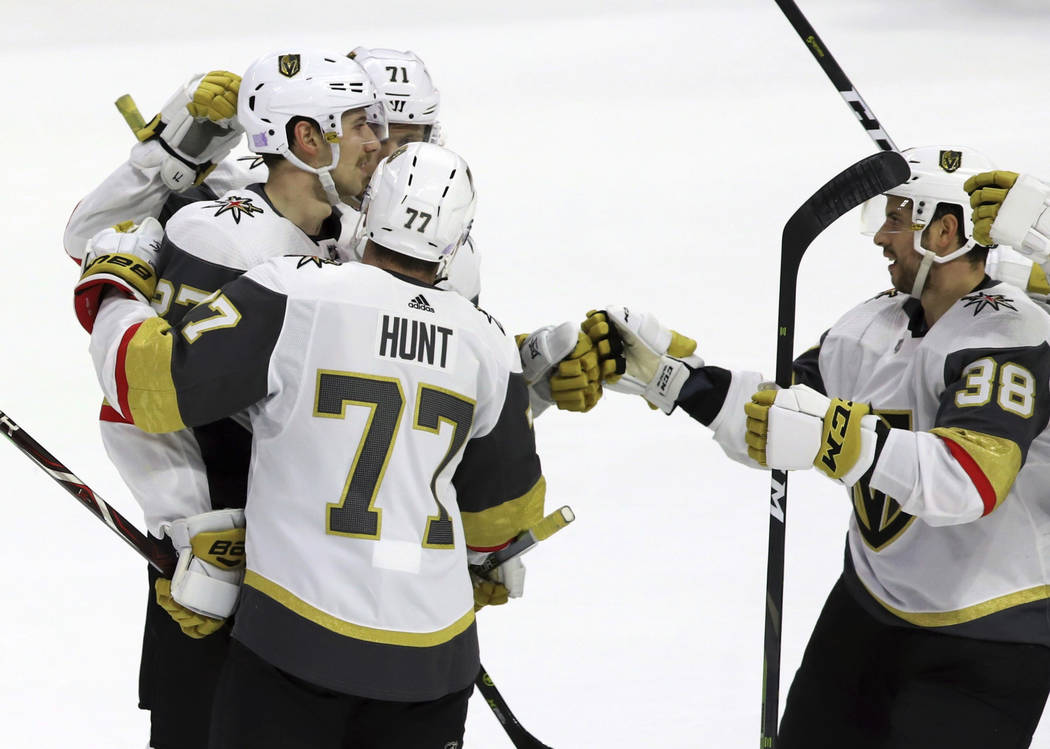 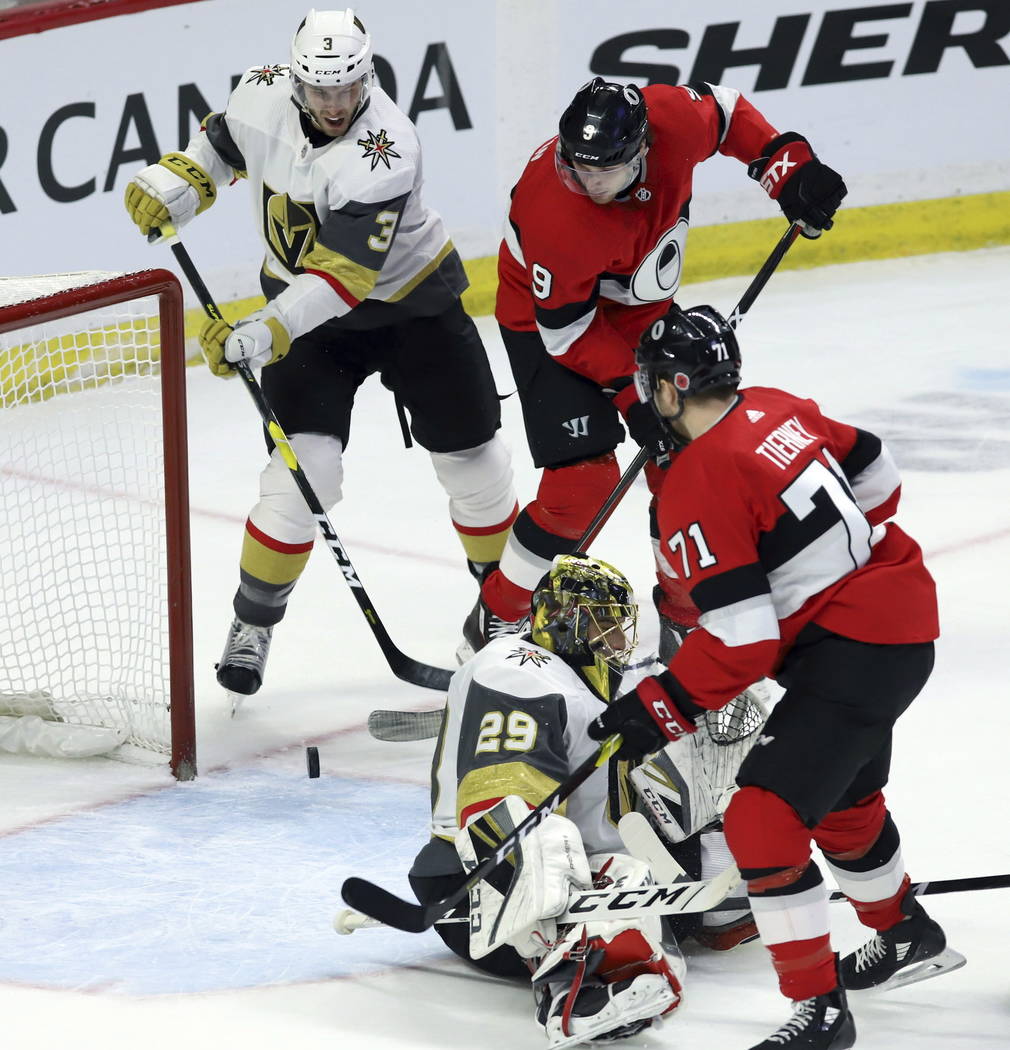 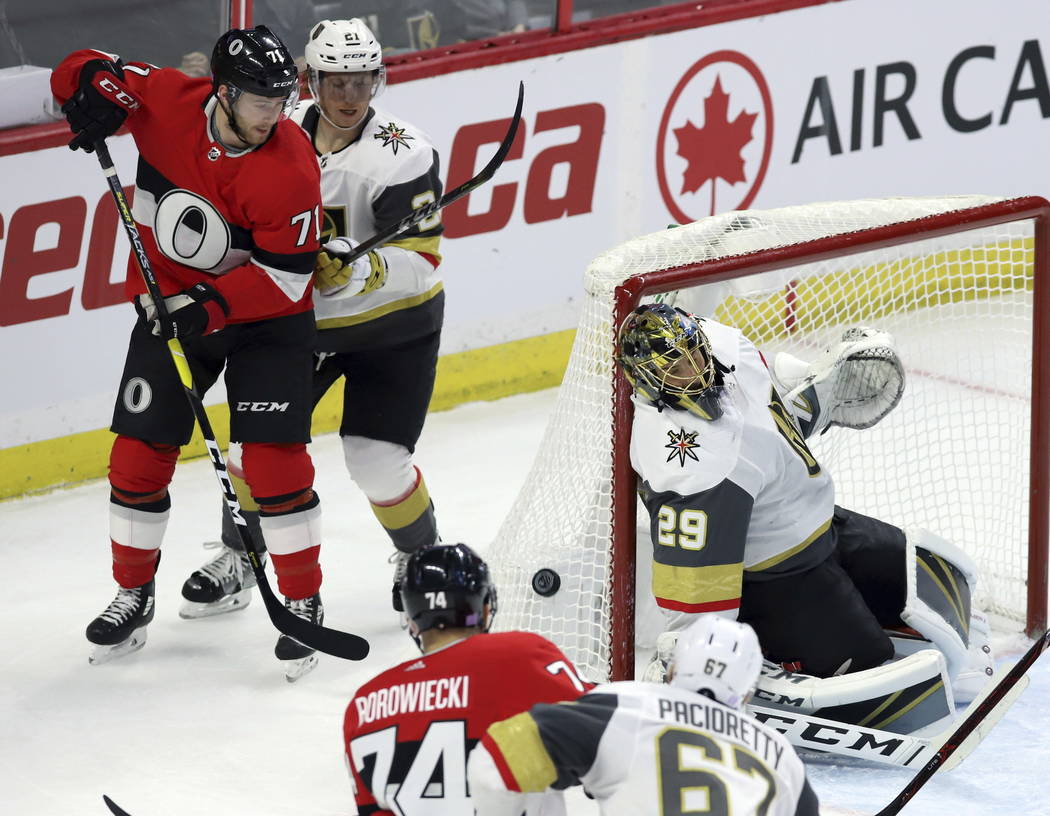 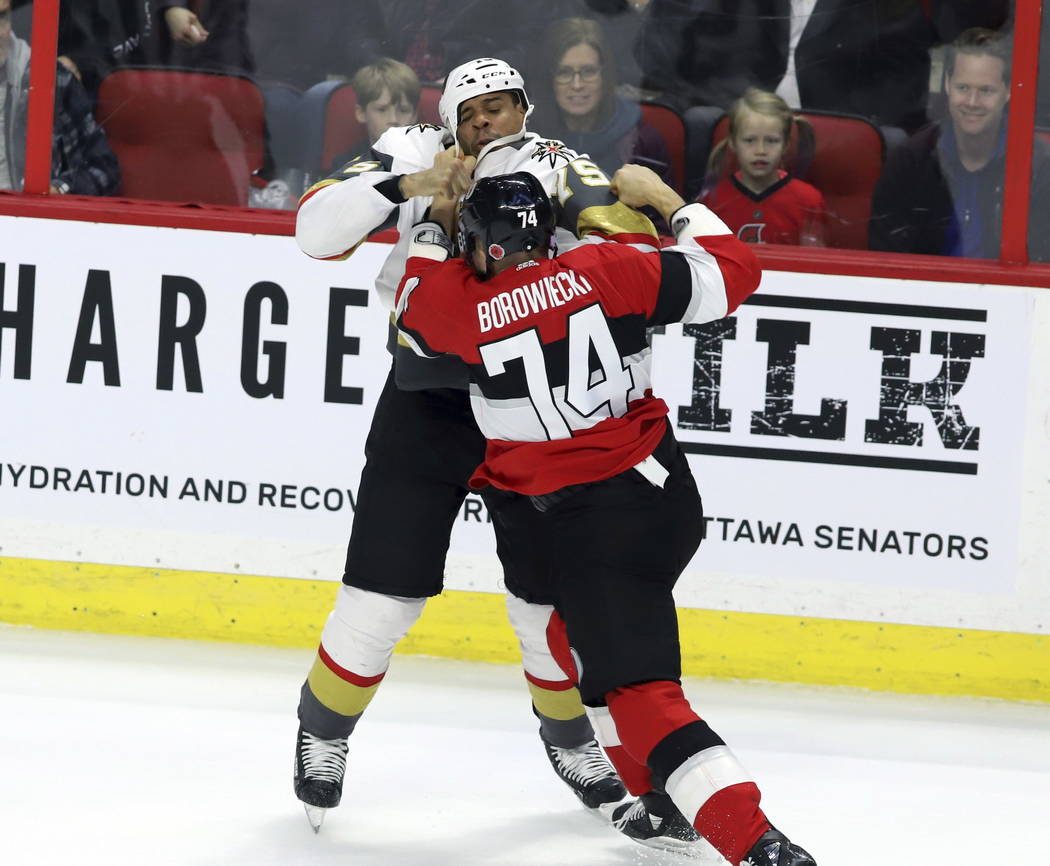 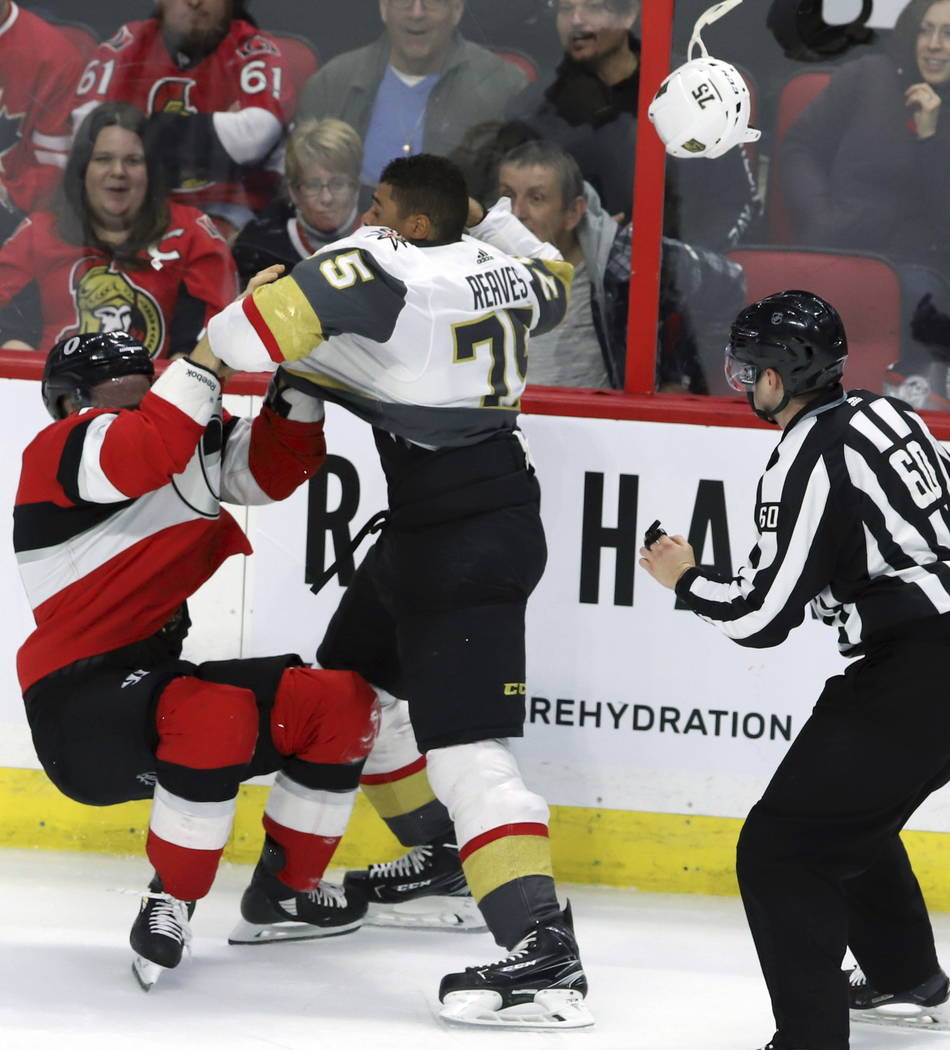 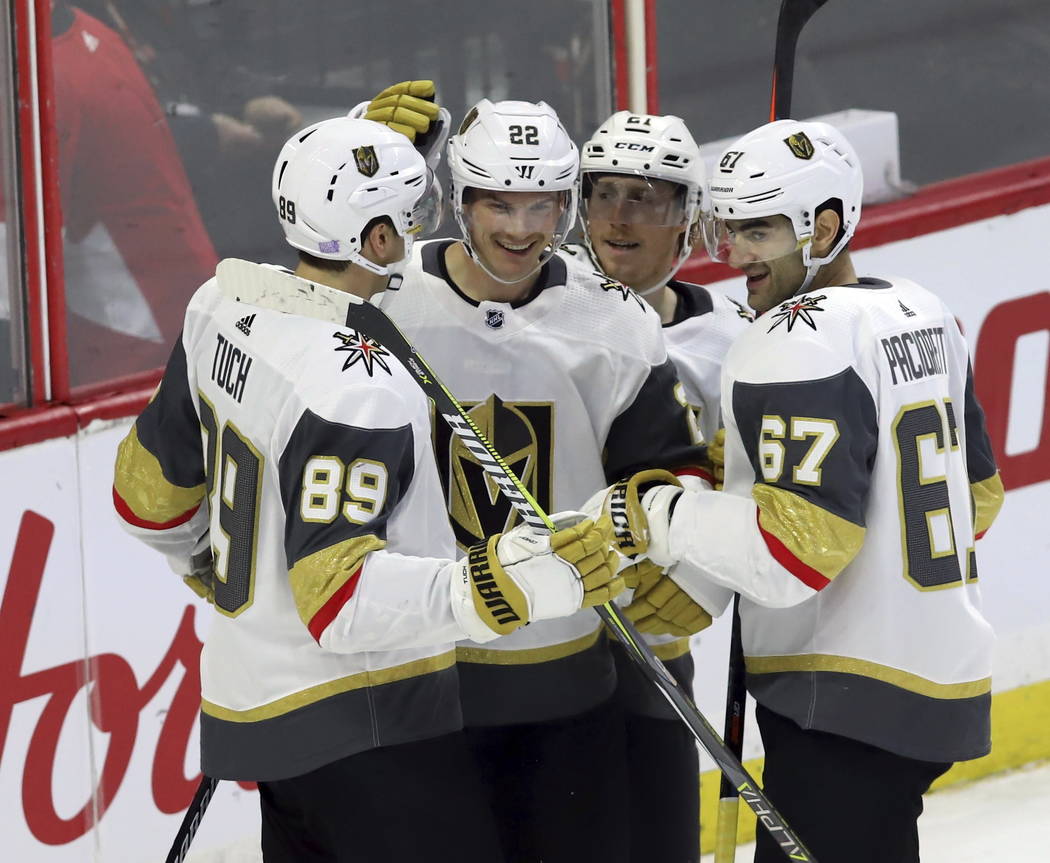 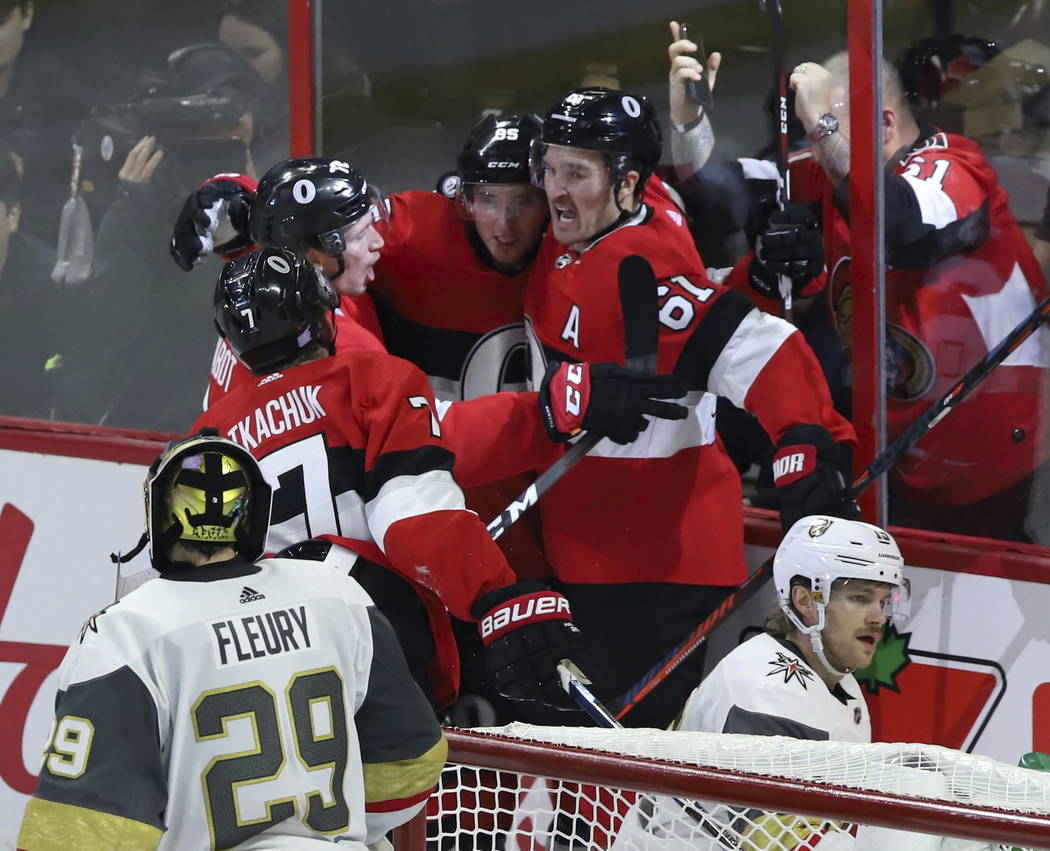 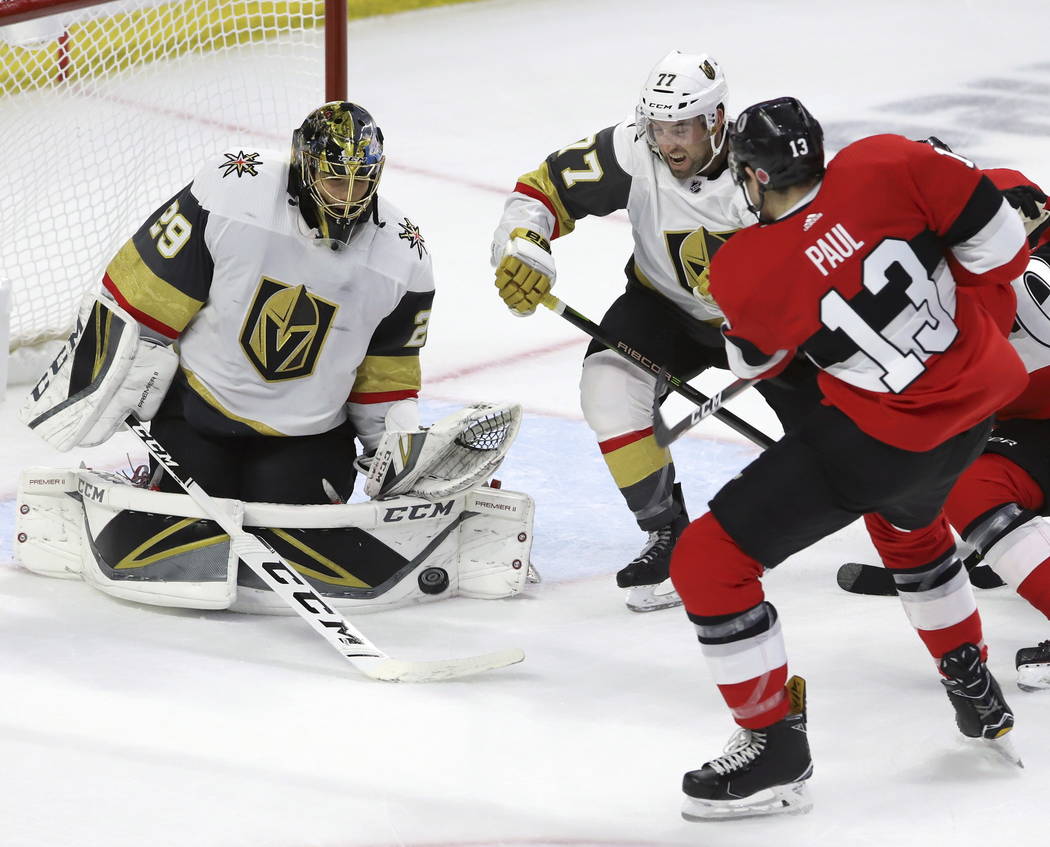 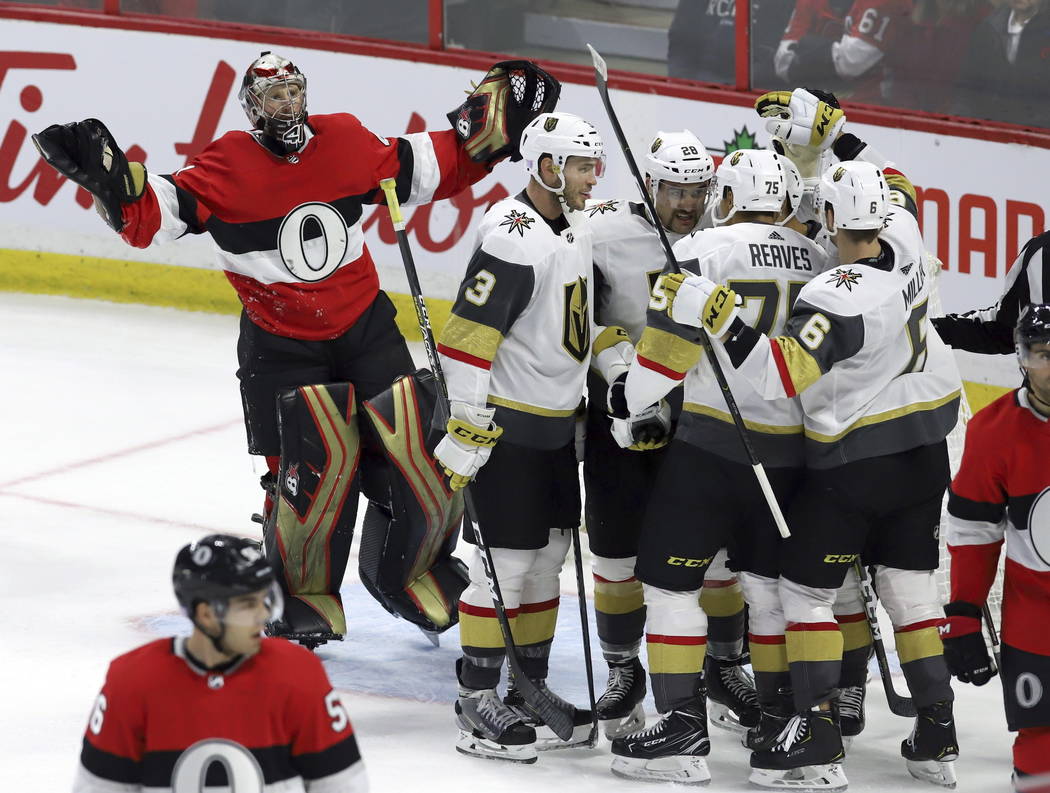 OTTAWA, Ontario — William Carrier was on the ice early every day during the Golden Knights’ current road trip, working on his shot.

The fourth-line winger recently changed the curve of his stick and needed to get adapted to the straighter blade.

“I’m using the (Paul) Stastny curve,” Carrier said. “It’s been working good for me, so I’ll give him all the credit for that. He’s got a good curve.”

Carrier backhanded in the go-ahead goal with 10:44 remaining in the third period Thursday to help the Knights break out of their offensive slump and earn a much-needed 5-3 victory over the Ottawa Senators at Canadian Tire Centre.

Linemate Pierre-Edouard Bellemare also scored in the third period as the Knights produced their season high in goals to snap a three-game road losing streak.

“When you finally get to be the line that helps the team in the right direction, no one of us three is going to complain,” Bellemare said. “We’ve worked hard a bunch of games. Tonight, for some kind of reason, it just went the right way at the right time. It’s not magic plays, but it’s working.”

Jonathan Marchessault and Shea Theodore scored power-play goals in the first period, and Nick Holden added his first goal with the Knights late in the second.

The Knights entered with the league’s worst power play at 11.8 percent and went 2-for-2 against Ottawa.

But the night mostly belonged to the line of Bellemare, Carrier and Ryan Reaves, who combined for two goals, two assists and a plus-4 rating.

Coach Gerard Gallant rewarded the group in the third period while the line of Ryan Carpenter, Tomas Hyka and Tomas Nosek was glued to the bench for most of the final 20 minutes.

During one shift with a little more than five minutes remaining, Carrier and Reaves wiped out multiple Senators with hard checks, to the chagrin of the announced crowd of 15,213 that was still upset about Bellemare’s goal being allowed.

“It doesn’t happen quite often, but we were playing right and (Gallant) saw that and wanted us to be out there for the big plays and stuff,” Carrier said. “It was fun. Hopefully that can happen again.”

Ottawa tied the game at 3-3 in the final period on goals 1:04 apart by Ryan Dzingel and Thomas Chabot. The Knights challenged that Chris Tierney interfered with goaltender Marc-Andre Fleury on Chabot’s goal, but the referees quickly ruled in Ottawa’s favor.

A little more than a minute later, Carrier drove the net and avoided Ottawa defenseman Mark Borowiecki before scoring his second goal in the past three games.

Bellemare gave the Knights a bit of breathing room with eight minutes left to play. Colin Miller’s drive from the point bounced off the boards behind the Ottawa net to Bellemare, and he knocked in his third goal from a tight angle.

Carrier was tangled up with Senators goaltender Craig Anderson and Ottawa challenged for interference, but the NHL situation room “determined that Anderson initiated contact with Carrier, who was outside the crease prior to the goal.”

Miller and Alex Tuch each finished with two assists, and 11 players recorded a point for the Knights, whose previous high for goals was four against Ottawa (Oct. 28) and Buffalo (Oct. 16).

“It just feels good just to win it in a good way,” Fleury said. “Even though they tied and the crowd was on their side, I thought we came back hard and played great. It’s good that we find ways to win games.”