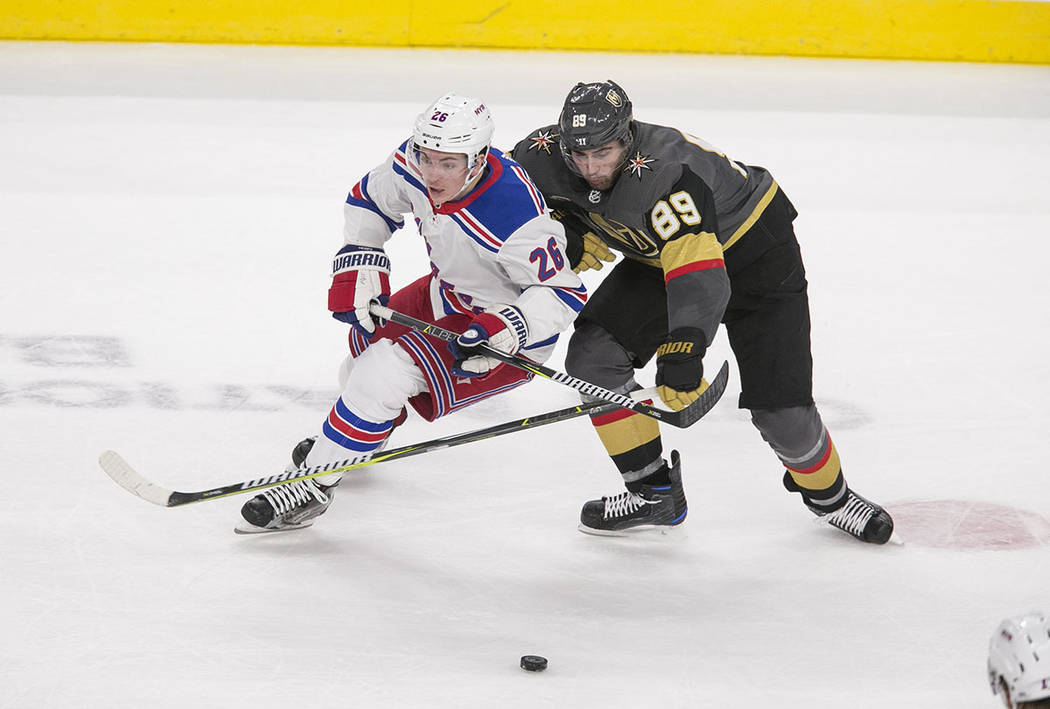 Gerard Gallant claims the Golden Knights’ forecheck is nothing special.

Forwards Alex Tuch and Pierre-Edouard Bellemare backed up their coach, describing it as no different than the rest of the NHL.

“They forecheck like anybody else,” Philadelphia Flyers coach Dave Hakstol confirmed.

At first glance, the Knights’ 1-2-2 forecheck resembles the system preferred by many teams throughout the league.

But it’s the full-throttle, teenager-behind-the-wheel aggression the Knights use to force turnovers in the opposing team’s zone that makes their forecheck unique.

“They’re a tenacious team,” Hakstol said. “I think they’ve got a relentlessness to their game that they seem to really pride themselves on, and I think that’s part of what makes them successful.”

The Knights’ ferocity on the forecheck contrasts with a team such as the Ottawa Senators, whose conservative 1-3-1 is designed to clog the neutral zone.

That system was so effective during last year’s Eastern Conference playoffs that Senators fans chanted “1-3-1” during games as a source of pride.

“The difference is we have a coach who’s been telling us he would rather lose by being aggressive than lose by being passive,” Bellemare said. “You want to make the ice as small as possible for the opponent. Creating a good forecheck with a five-man unit, that’s what you do.”

“If I’m playing a good game, you’ll see me on the forecheck finishing hits and turning pucks over,” Tuch said. “That’s one of the keys to my game.”

The second and third forwards, along with the two defensemen, are tasked with reading the play and reacting appropriately.

If the puck gets frozen along the wall, the second forward (F2) provides support and tries to dig it free. Otherwise, the Knights’ forecheckers use their speed to close down passing lanes and force opposing players to give up possession, similar to a full-court trap in basketball.

“They arrive on time and they have a purpose behind where they put it, how they place it and making sure that with that quickness, it’s almost like a direct indirect play,” Chicago coach Joel Quenneville said.

Unlike “heavy” teams such as the Anaheim Ducks, who visit T-Mobile Arena at 7 p.m. Monday, the Knights’ F1s — with the exception of a healthy William Carrier — don’t look to make jarring hits on the forecheck.

The Knights are second behind Carolina with 642 takeaways, 100 more than the No. 3 New York Rangers.

“For us, it’s just trying to get in on their defensemen and make it hard on teams to break out of their zone,” Neal said. “Try to move the puck in there and put it in good spots for other players to get it.”

A perfect example came against Edmonton on Jan. 13 when Smith outmuscled Oilers defenseman Kris Russell and freed the puck behind the net for Jonathan Marchessault to set up William Karlsson’s one-timer late in the second period.

Anaheim struggled to break out of its zone in three losses against the Knights.

In the last meeting on Dec. 27, Karlsson scored a backbreaking goal early in the third period off a turnover caused by the Knights’ forecheck.

“I think it’s a good indicator when we’re playing well is when our forecheck is going,” center Erik Haula said. “That’s when we’re confident. Our (defensemen) are hopping into the play. It’s not just the forwards, it’s the defensemen holding pucks in and pinching on the walls. That’s when we’re on top of our game.”