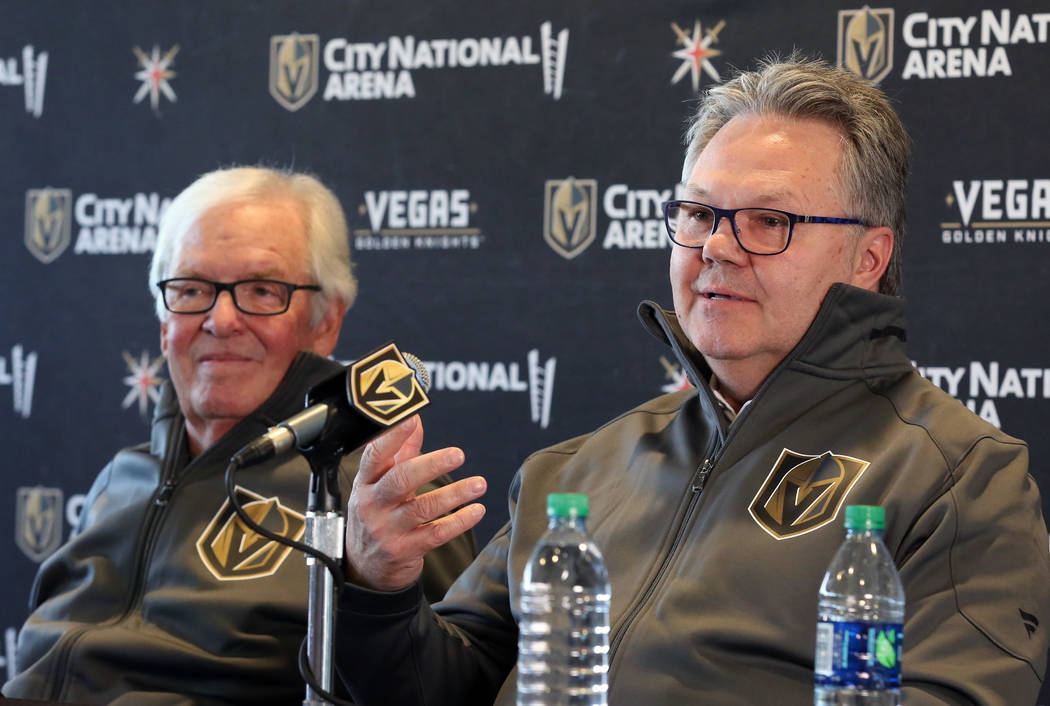 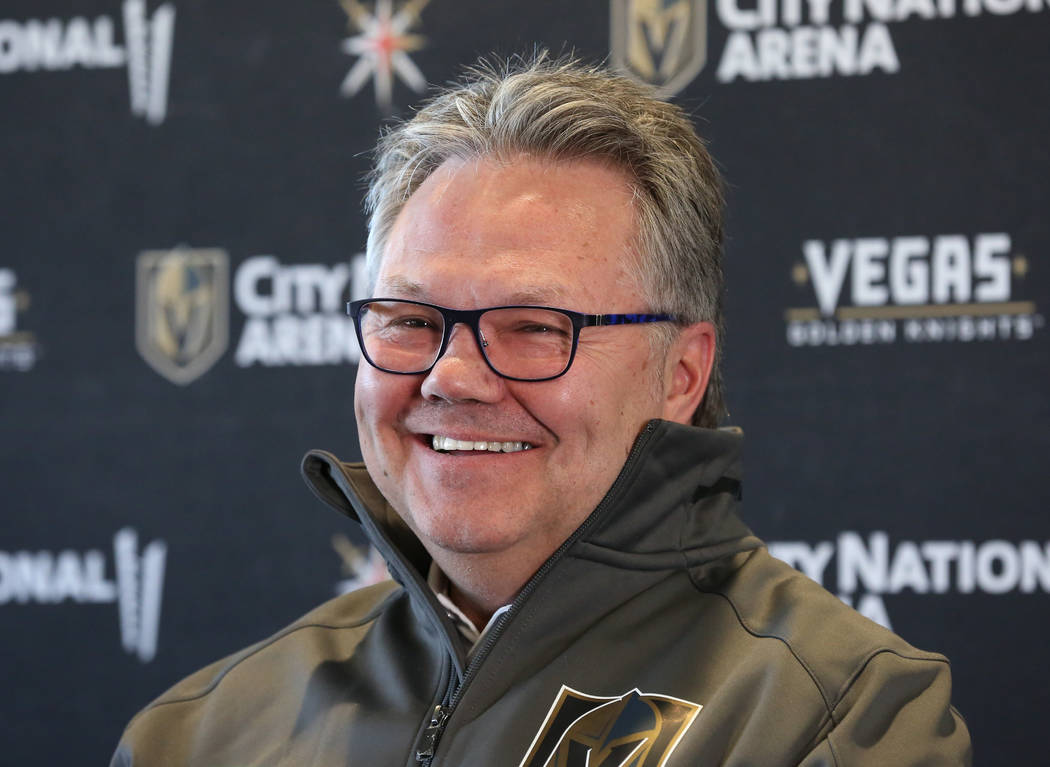 Kelly McCrimmon was introduced as the Golden Knights' new general manager during a press conference at City National Arena on Thursday, May 2, 2019, in Las Vegas. (Bizuayehu Tesfaye/Las Vegas Review-Journal) @bizutesfaye 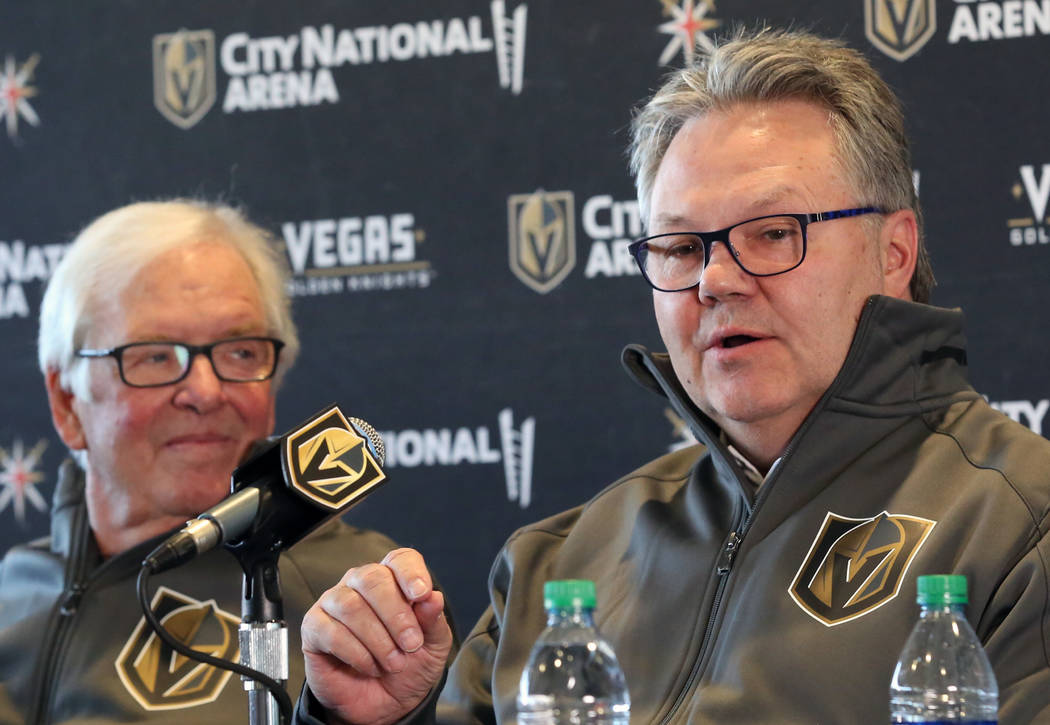 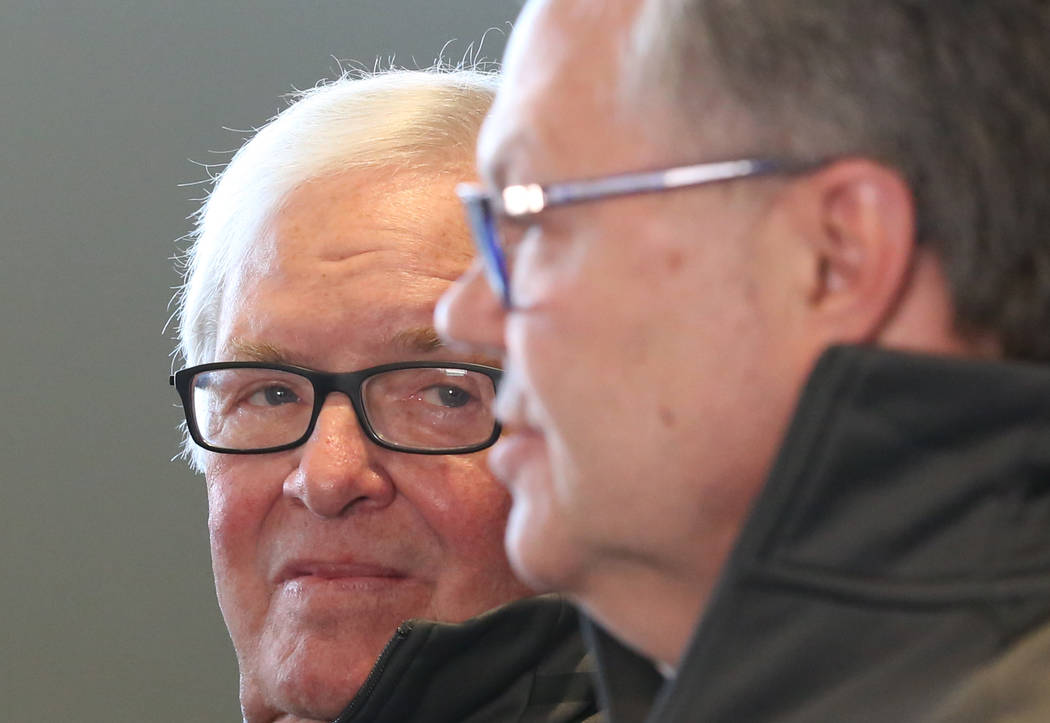 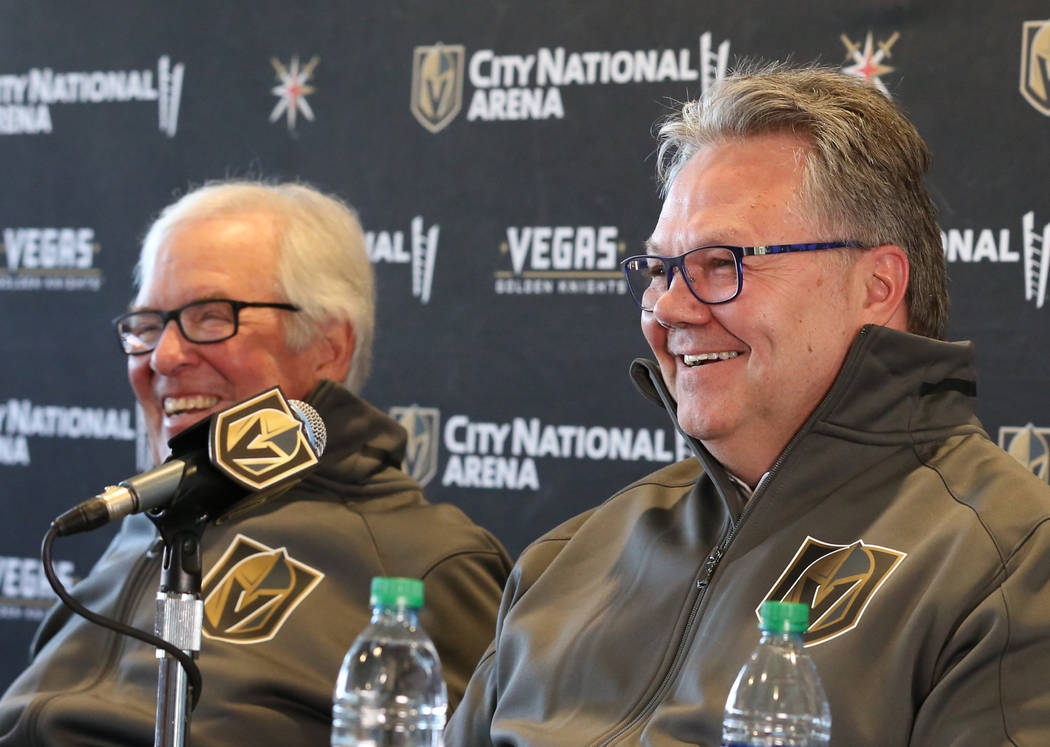 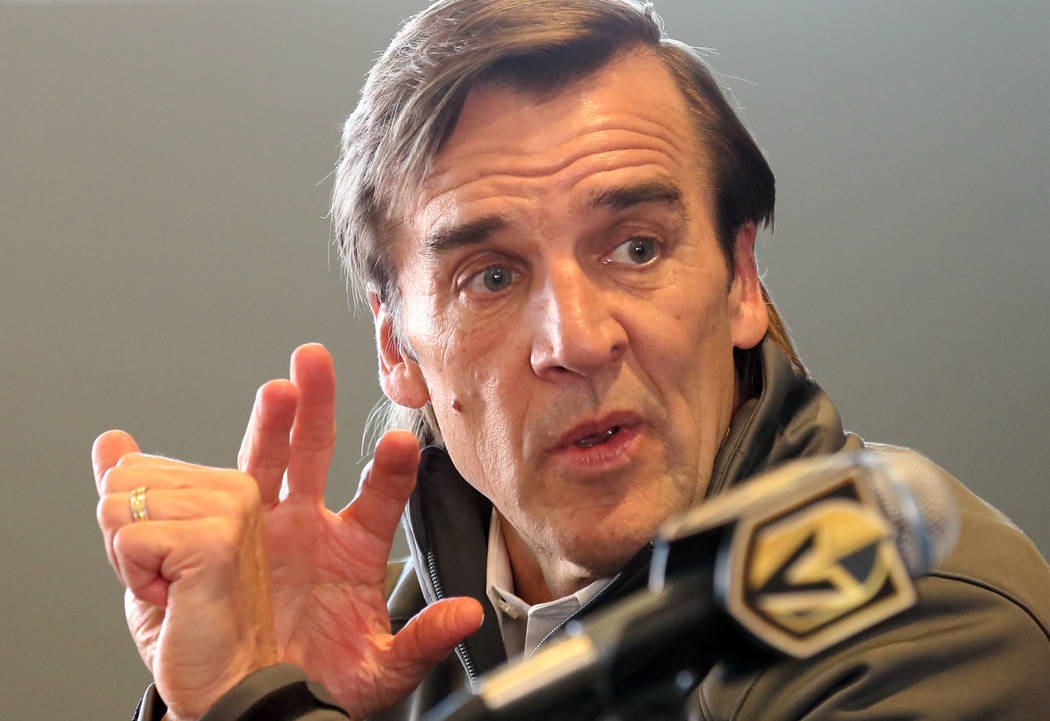 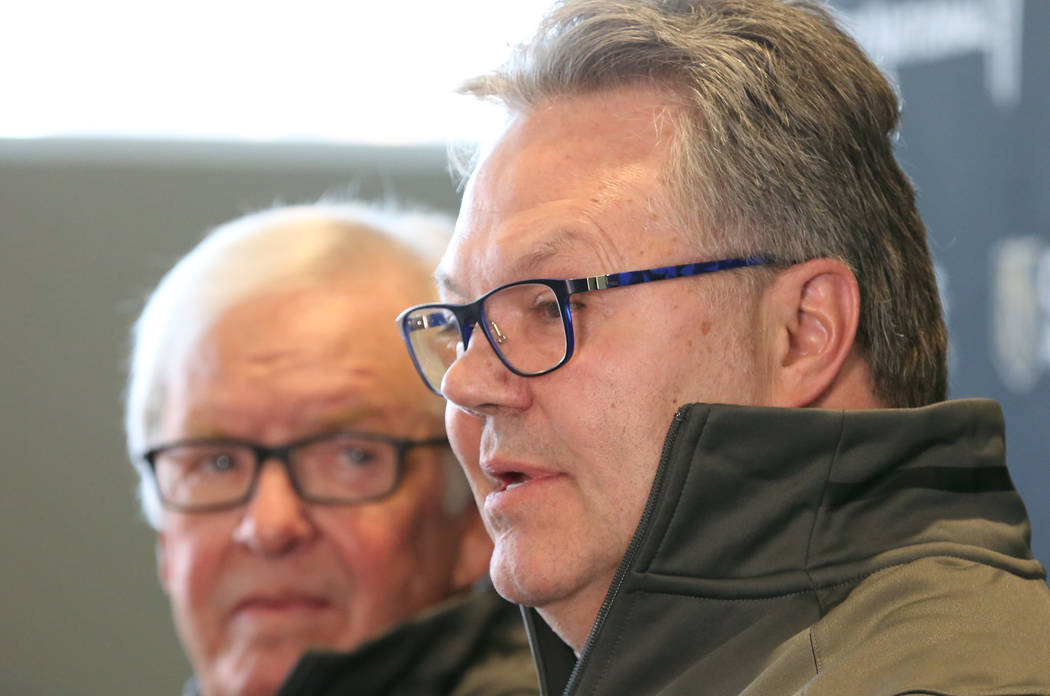 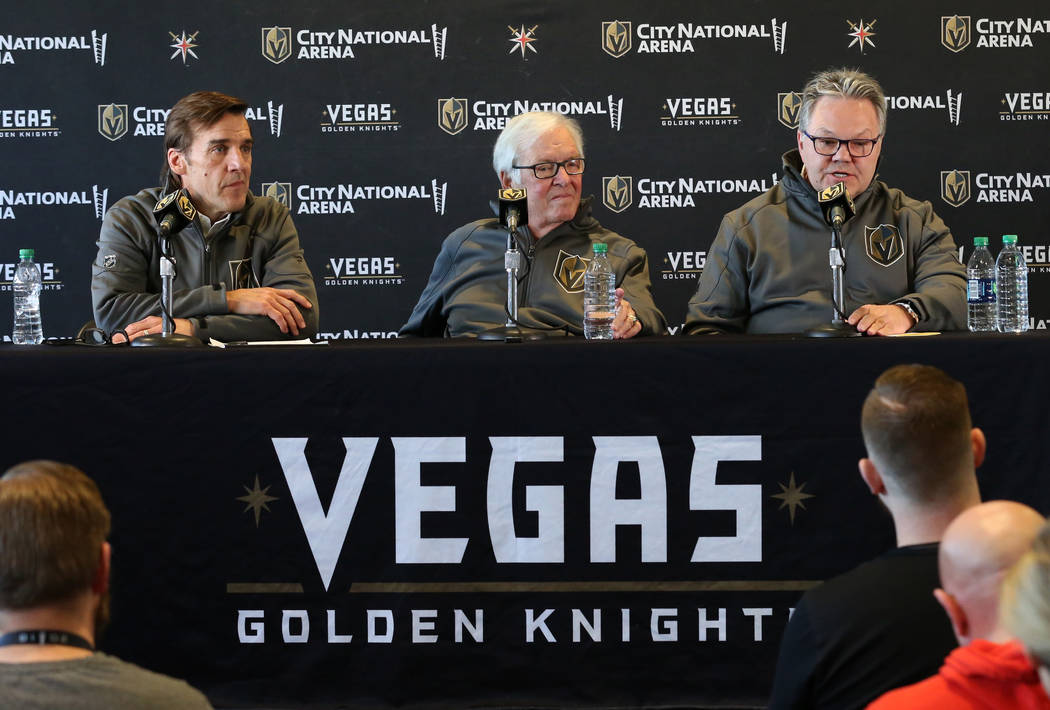 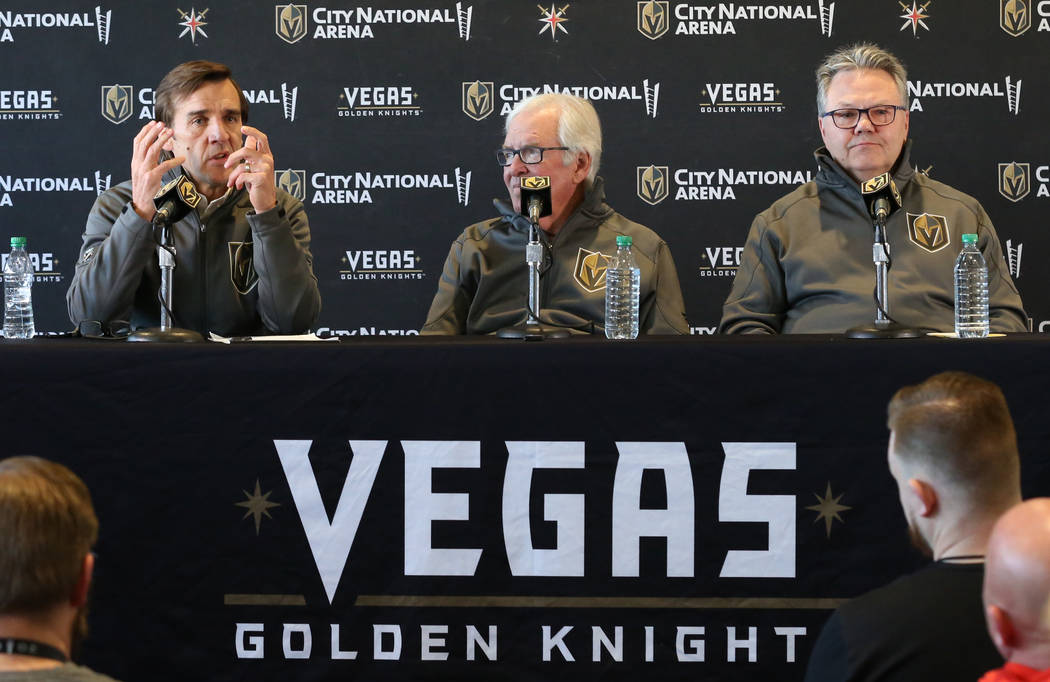 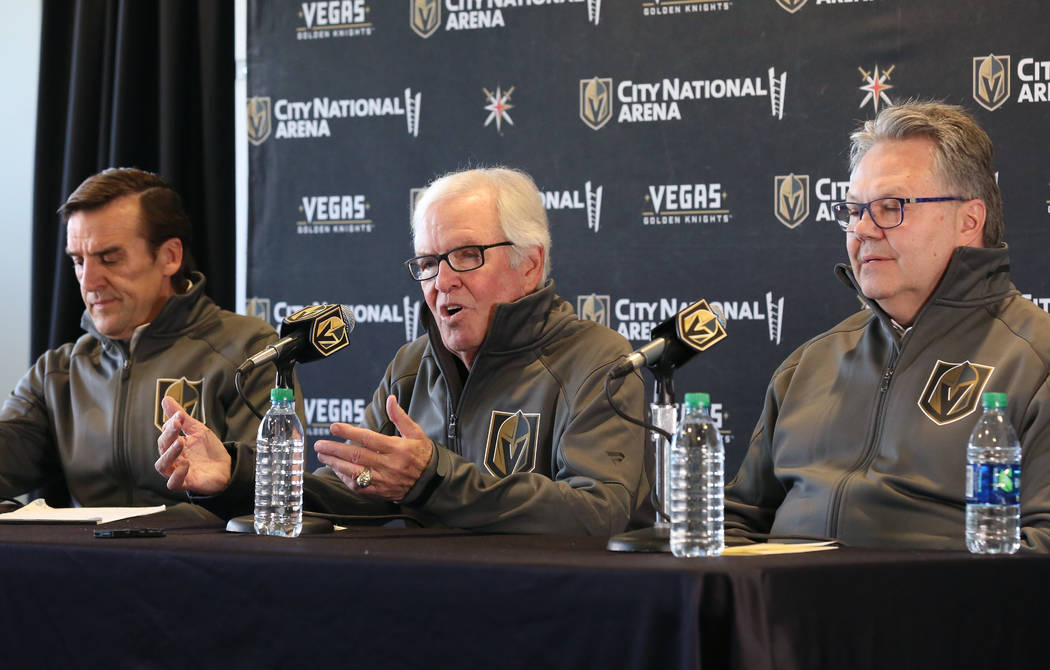 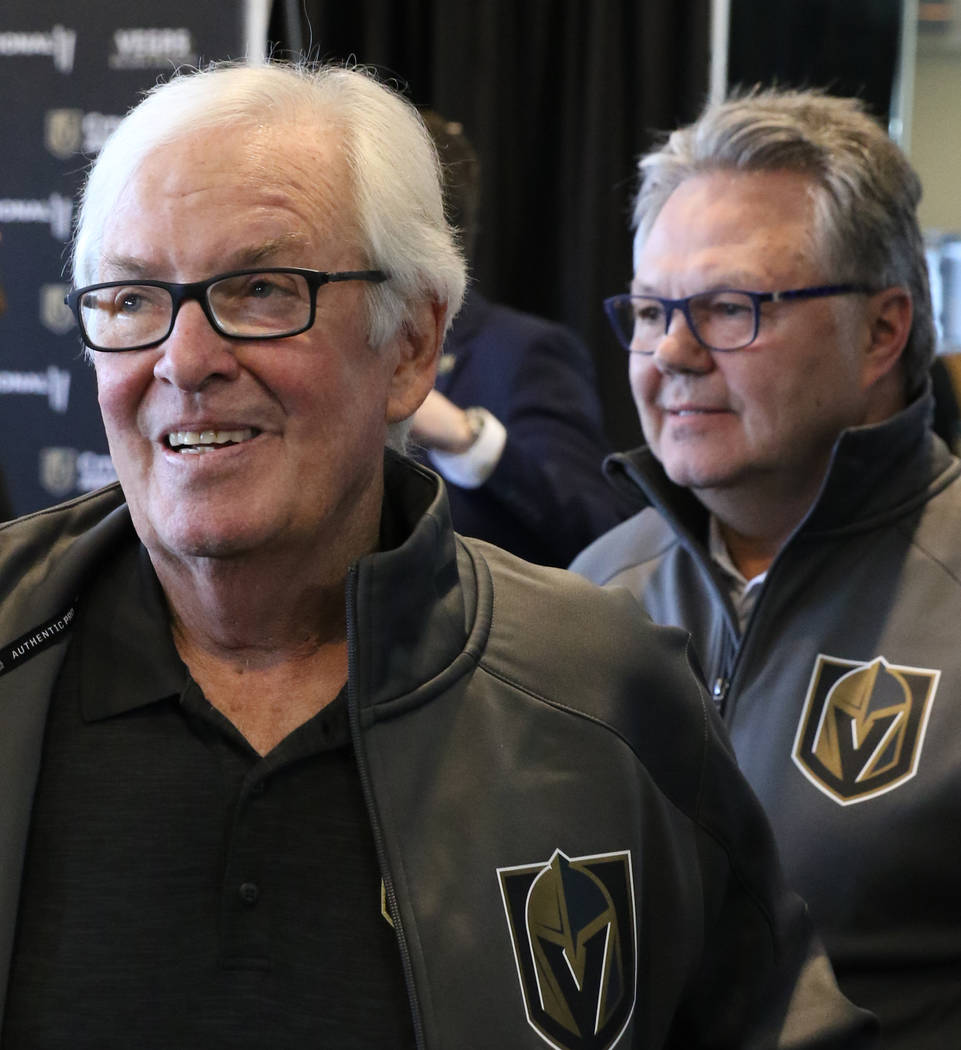 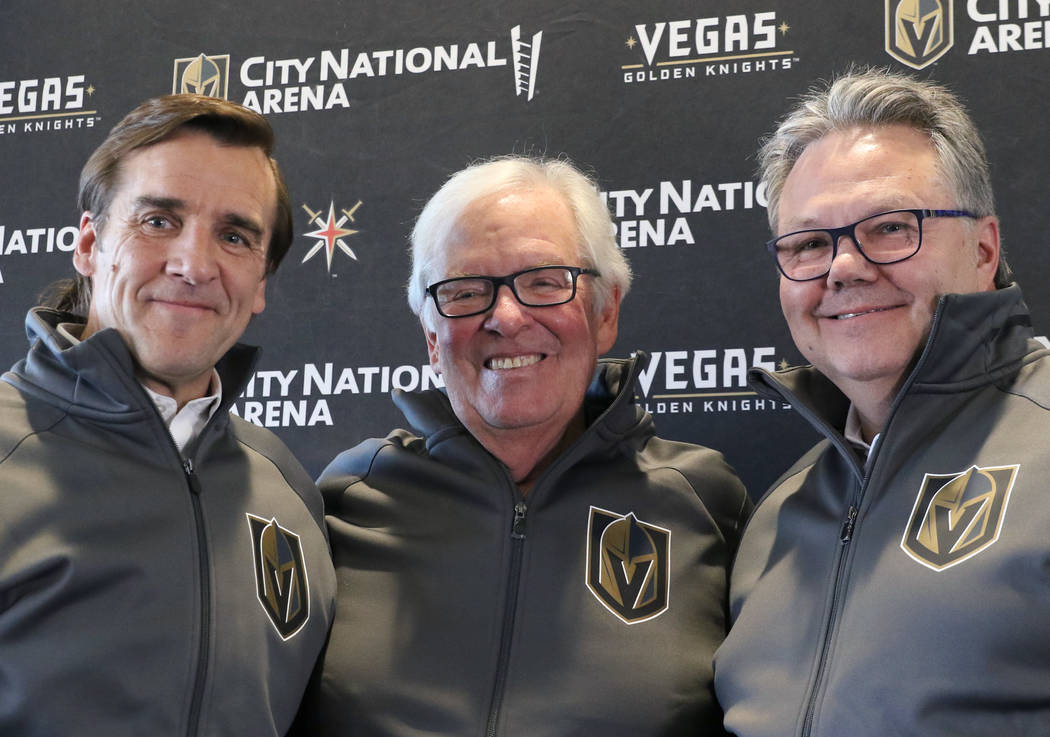 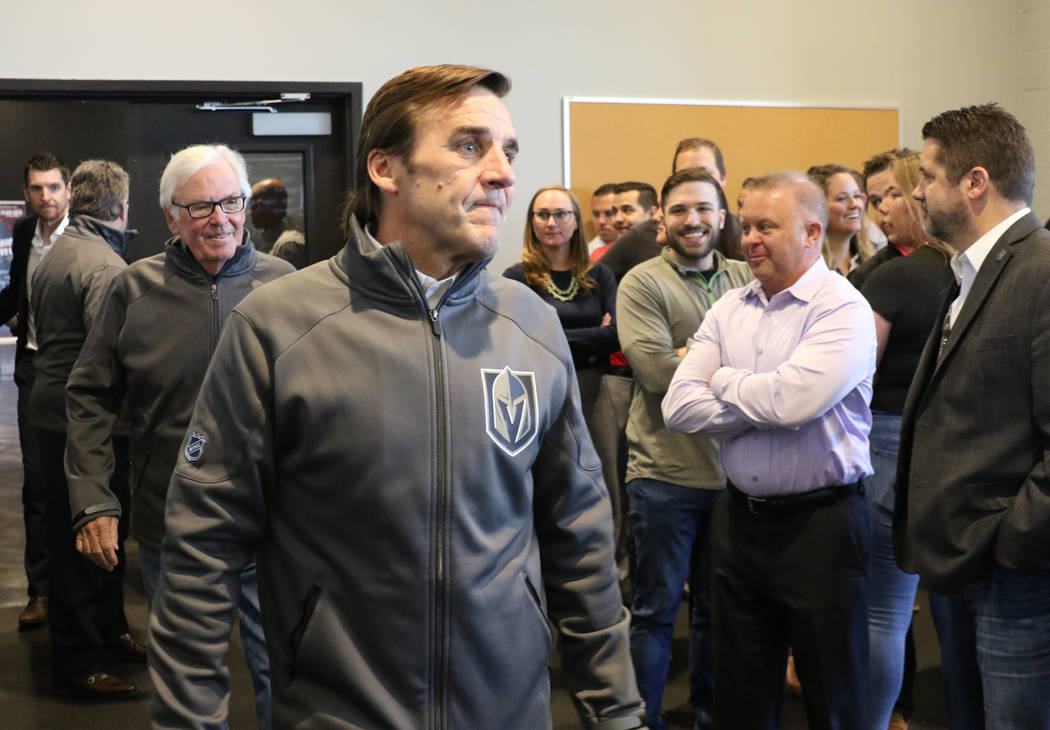 But make no mistake, Thursday’s move means much more than a raise in pay and spiffy new title.

That much was clear when George McPhee broke down and was unable to continue his opening remarks after he noted how proud McCrimmon’s late brother, Brad, would be.

Kelly McCrimmon later welled up with tears as he reminisced about his own career along with his older brother, who died in the 2011 plane crash carrying the Lokomotiv Yaroslavl hockey team of the Kontinental Hockey League.

“I think about him every day, always fondly,” McCrimmon said. “There’s occasions like this where it kind of grabs ya.”

Owner Bill Foley and McPhee announced the club’s front-office restructure, which is effective Sept. 1 and removes McCrimmon’s name from consideration for other GM jobs around the NHL.

McCrimmon will take on added responsibility, representing the club at the GM meetings and serving as the club’s primary point of contact for the league’s other GMs.

McPhee, who initiated the change, will retain his role and continue to oversee decisions as president of hockey operations.

Terms of the contract for McCrimmon, 58, were not disclosed. The team said it will not hire or promote a replacement for McCrimmon.

“The thing that’s special about our organization, our relationship really, is just the collaboration,” McCrimmon said. “From day one, we made every decision together. When we have free-agency meetings, when we have our meetings at the trade deadline … it’s completely transparent, collaborative. There’s full trust in our whole staff. I really believe that that brings you to good decisions.”

McCrimmon was hired as assistant general manager on Aug. 2, 2016, and played a pivotal role in the club’s preparation for the 2017 expansion draft.

He also was instrumental in the Knights’ trade-deadline acquisition of right wing Mark Stone, who played for McCrimmon in juniors, and worked closely with McPhee on all day-to-day decisions.

“Every organization has its own structure, and our command structure has been perfect, I believe,” McPhee said. “We’ve shared everything. We’ve basically co-managed for three years, and that will continue.”

McCrimmon’s work with the Knights was noticed around the league. The Edmonton Oilers publicly pursued the Plenty, Saskatchewan, native to interview for their vacant GM position.

NHL Seattle also had McCrimmon near the top of its list of candidates and was expected to approve hiring a GM this summer had the interest been reciprocated.

McPhee confirmed that at least one club asked for permission to interview McCrimmon after the Knights’ season ended April 23, but declined to name any suitors.

“There’s no doubt in my mind that, if interviewed, Kelly would have been a manager someplace else, so why not do it here?” McPhee said. “He deserves this, and he’s ready for it.”

With the interest in McCrimmon heating up, McPhee started to contemplate ways to keep the club’s senior management intact three to four weeks ago.

McPhee discussed the parameters of a move with his right-hand man Friday and met with Foley on Saturday morning. The move was finalized Wednesday.

McCrimmon, a three-time executive of the year in the major junior Western Hockey League, also was inducted into the Manitoba Hockey Hall of Fame on Thursday.

“George is still the boss, Kelly is now the GM, but we’re all still going to be together,” Foley said. “It’s a ratification of what we did three years ago when we brought the guys in either on the business side or the hockey side. We have the right group of people, and they’re treating their obligations really, really correctly.”