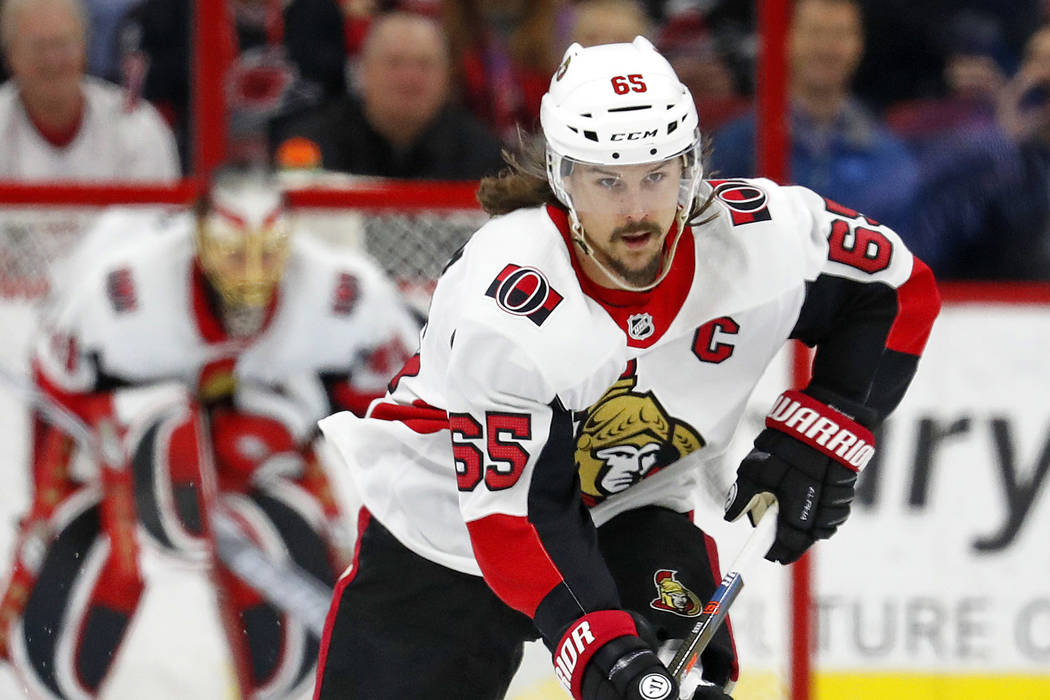 In this Jan. 30, 2018, file photo, Ottawa Senators' Erik Karlsson (65) moves the puck against the Carolina Hurricanes during the first period of an NHL hockey game, in Raleigh, N.C. (AP Photo/Karl B DeBlaker, File) 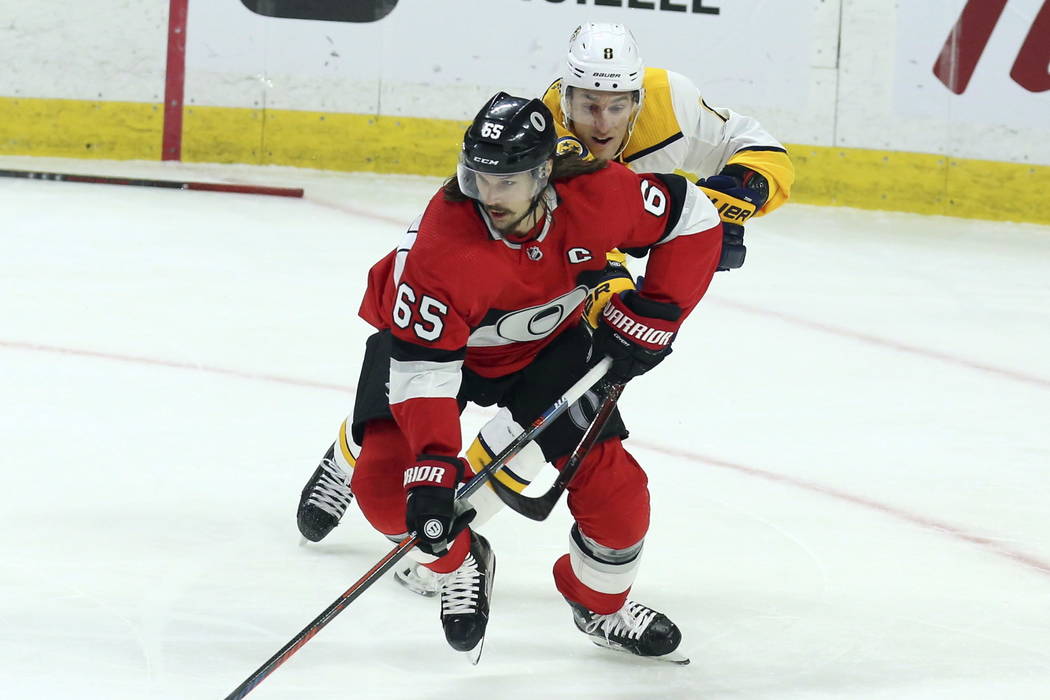 With the John Tavares watch complete, the attention now is on the Erik Karlsson sweepstakes.

The Golden Knights are one of the teams working to land the all-star defenseman from Ottawa, according to multiple reports Tuesday.

Dallas and Tampa Bay reportedly also are the frontrunners to trade for Karlsson, a two-time Norris Trophy winner as the league’s top defenseman.

Colorado previously was linked along with the New York Islanders, who lost Tavares in free agency to Toronto.

Karlsson, 28, is set to become an unrestricted free agent in 2019, and the rebuilding Senators risk losing him for nothing in return. Ottawa general manager Pierre Dorion said Sunday the team tabled an eight-year extension for Karlsson, worth a reported $80 million.

The @Senators offered Erik Karlsson an 8 year contract extension for $10M per season. Now they are in serious trade talks with multiple teams highly interested. #NHLNews

Los Angeles signed Drew Doughty to an eight-year, $88 million extension this week, establishing what appears to be the market price for franchise defenseman.

After Karlsson declined Ottawa’s offer, word leaked around the league Monday that the Senators granted permission to clubs to speak with Karlsson and his agent about a contract extension.

The Knights’ package to acquire Karlsson likely would include defenseman Shea Theodore, a prospect and draft picks. Ottawa does not have a first-round pick in 2019 after sending it to Colorado in the November trade for Matt Duchene.

The Knights also could send an additional NHL-level player the other way to help Ottawa remain above the salary cap floor of $58.8 million.

“We’re sitting there now trying to decide — again, we kept our young assets, all of our draft picks — and we’re trying to decide do we make another move now or not?” Knights general manager George McPhee said Sunday. “Is the right move there to make us even better? We’ll have to decide that in the next few weeks.”

The Knights turned down a deal for Karlsson at the trade deadline, according to SportsNet, refusing to part with prospect Cody Glass.

Karlsson had nine goals and 53 assists in 71 games, and his point total (62) ranked sixth in the league among defensemen despite a tumultuous season.

The native of Sweden dealt with multiple trade rumors and the death of his son, Axel, who was stillborn in March.

The Knights have nearly $19 million in salary cap space, according to CapFriendly.com, and are one of the few teams able to take on the bloated contract of Senators winger Bobby Ryan in a deal for Karlsson.

Karlsson has a $6.5 million cap hit in the final year of his deal.