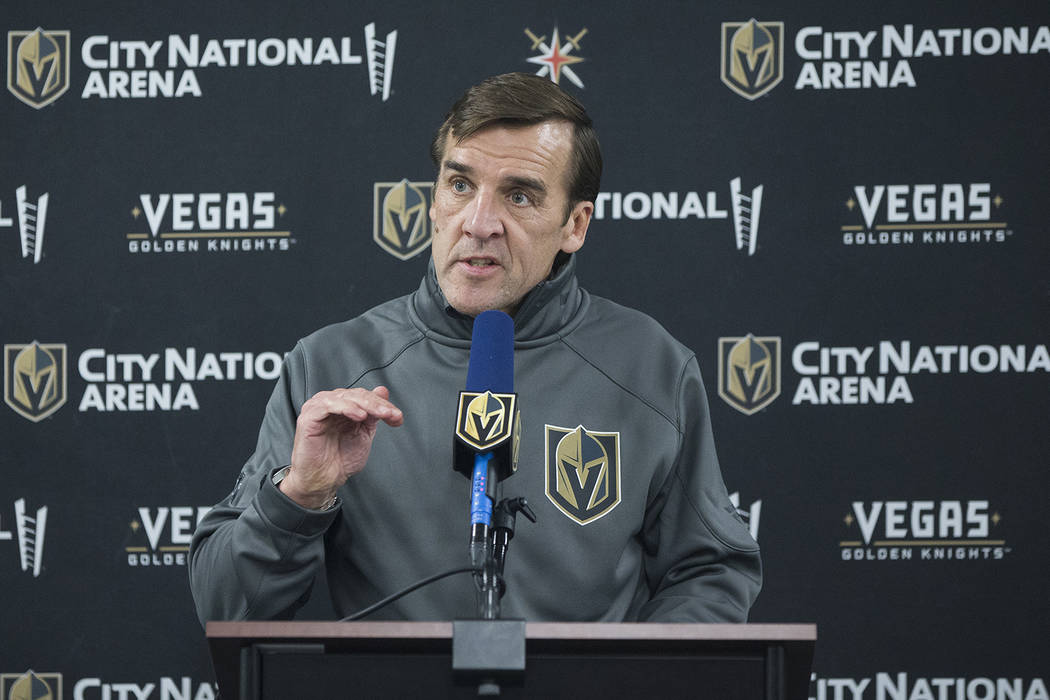 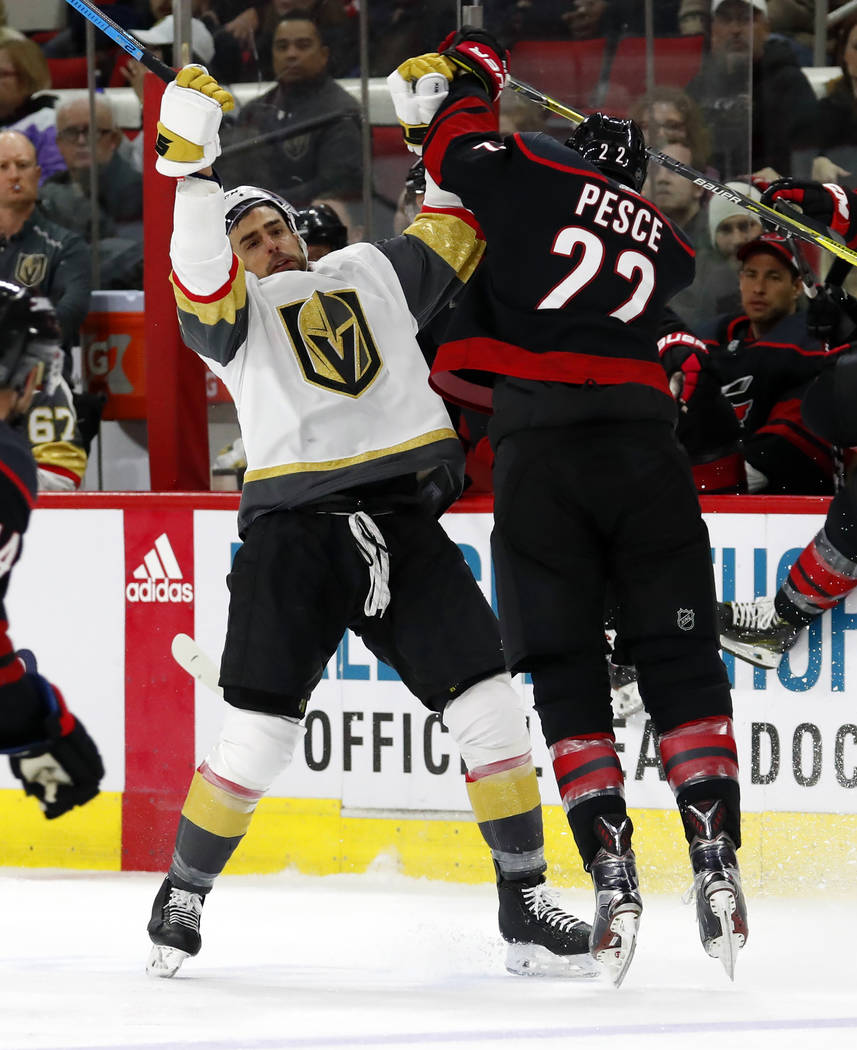 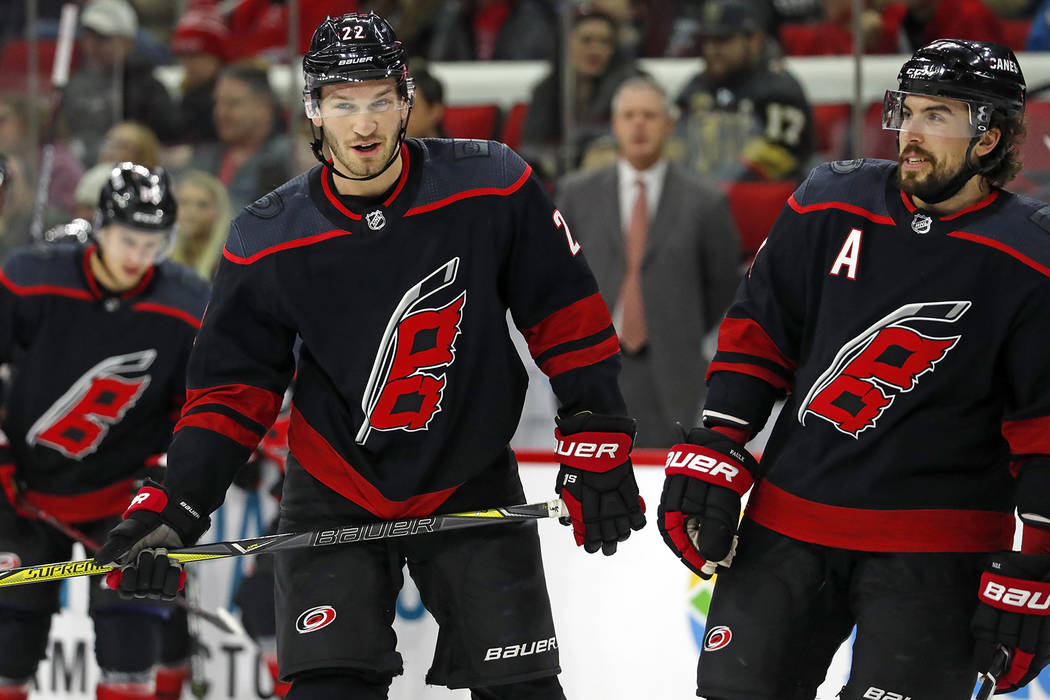 Carolina Hurricanes' Brett Pesce (22) and Justin Faulk (27) skate away from the bench against the Vegas Golden Knights during the first period of an NHL hockey game, Friday, Feb. 1, 2019, in Raleigh, N.C. (AP Photo/Karl B DeBlaker)

Ryan Reaves never used to worry about the trade deadline. He kept it out of sight, out of mind.

“And then I got traded twice,” the Golden Knights winger said. “I think it’s always in the back of your mind because hockey is still a business, so anything is possible. You never really know what is going on upstairs.”

The NHL trade deadline is less than two weeks away and general manager George McPhee has been actively working the phone lines to gauge the market, according to sources around the league.

The Knights have surplus draft picks to move and plenty of salary cap space with which to work.

But in a brief interview with the Review-Journal last week, McPhee indicated he doesn’t feel the need to make a move between now and Feb. 25.

“There are years where you feel like you have to do something to help your team, and there are years you look at your team and say, ‘It’s a solid team and we like it as is.’ And that’s how we feel this year,” McPhee said. “We’re a pretty solid team, and we’re not interested in taking anyone off of our team, off our roster. We’ll be involved, and we’ll see where it goes.”

McPhee is not one to play his cards face-up, but history shows he has been active at the trade deadline throughout his career.

Last season, he landed the physical Reaves from Pittsburgh a few days prior to the deadline to “keep the flies off the honey” and struck an 11th-hour deal with Detroit for winger Tomas Tatar.

With no glaring holes on the roster this time around, NHL Network analyst Brian Lawton believes the Knights, who host Arizona on Tuesday at T-Mobile Arena, are more likely to add depth rather than going “big-game hunting” at the deadline.

“I think George McPhee is a veteran GM who recognizes, and rightfully so, they have a very good team in Vegas,” said Lawton, who served as GM of the Tampa Bay Lightning for two seasons. “Whenever you have a club like that, you do everything possible to give your club a chance to win the (Stanley) Cup.”

Lawton identified right defense and backup goaltender as two areas McPhee might look to shore up.

Carolina has a crowded blue line (could Justin Faulk or Brett Pesce be pried away?) and are potential sellers at the deadline.

Any goaltender on the market would have to get the seal of approval from assistant Dave Prior, who could prefer to stick with oft-injured Malcolm Subban as Marc-Andre Fleury’s understudy.

“I think they really need to make sure they slow down how many games Marc is playing,” Lawton said. “Part of the reason for his superior season last year is he did miss a number of games and he was really fresh. I definitely think there are guys out there available.”

The Knights have nearly $16.5 million in deadline cap space, according to CapFriendly.com, which would allow them to take on an expiring contract or rental player such as Ottawa right wing Mark Stone ($7.35 million cap hit).

Stone has 25 goals and 56 points in 55 games and is regarded as one of the top defensive wingers in the league. He played junior hockey in the Western Hockey League with Brandon, which formerly was owned by Knights assistant general manger Kelly McCrimmon.

The Knights gave up a first-, second- and third-round pick for Tatar, and it could take a similar package or more to land Stone, who will be an unrestricted free agent.

Philadelphia’s Wayne Simmonds is in the last year of his contract ($3.975 million cap hit) and also has been linked with the Knights. But the winger’s production has declined (16 goals in 55 games) and McPhee may be hesitant to part with a first-round pick if that’s the price to acquire the 30-year-old.

“We have cap space to do things, but the inclination is to not take on rentals,” McPhee said.

Andre Burakovsky of Washington (15 points in 49 games) has been on the trading block most of the season and could be a less expensive alternative to bolster the third line.

Burakovsky, 24, will be a restricted free agent, and McPhee drafted him in the first round in 2013 when he was the Capitals GM.

“(The players) want to make sure we’re playing well and working hard and giving ourselves the best chance to win,” coach Gerard Gallant said. “On the other side of it you look and say, ‘Well, what do we need to make us better?’ I think it’s a fine line, and if you’re going to get somebody, make sure it’s the right people.”

McPhee showed last year he can be creative at the deadline, when he helped facilitate Pittsburgh’s move for Derick Brassard and acquired Reaves from the Penguins.

The Knights own the rights to Russian forward Nikita Gusev and also could use that as a potential bargaining chip for a team like, say, Florida, which is clearing cap room as it chases Russian stars Artemi Panarin and Sergei Bobrovsky of Columbus.

“We don’t know what is going to go on with our team,” left wing Max Pacioretty said, “but at the same time, we want to try and force (management’s) hand and make sure they know that everyone in this room wants to play for each other and play together because we have high hopes for this group.”