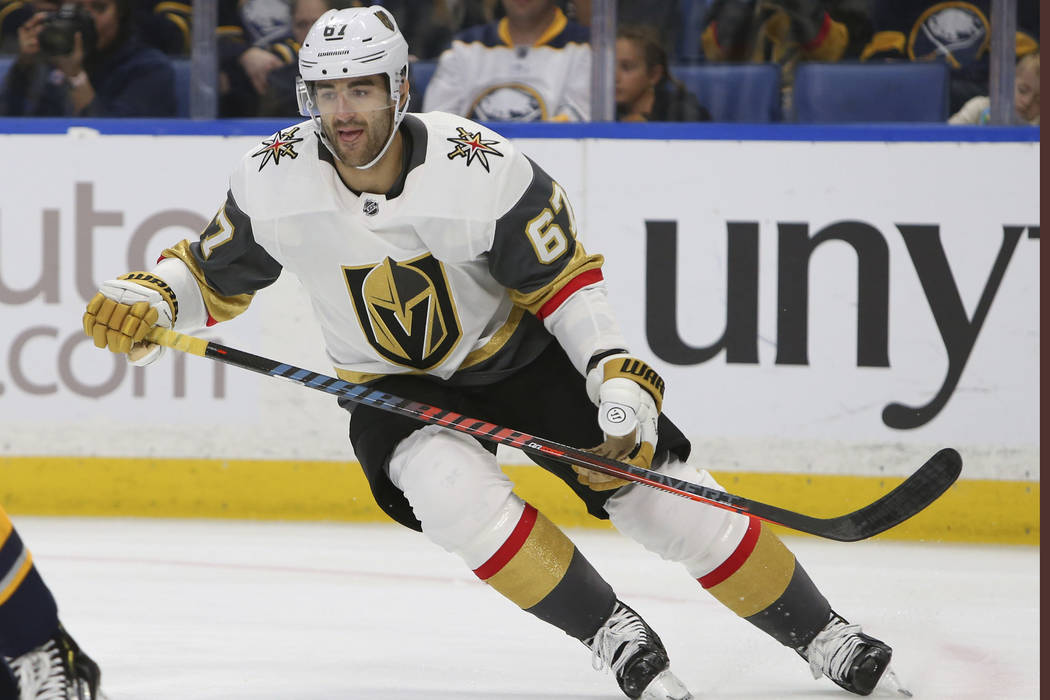 Max Pacioretty is close to returning to the Golden Knights’ lineup.

The left wing was a full participant in Saturday’s morning skate at City National Arena, and coach Gerard Gallant confirmed he will travel with the team to Toronto on Sunday for the start of the Knights’ four-game road trip.

Pacioretty did not play Saturday in a 3-0 victory against the Carolina Hurricanes at T-Mobile Arena.

The Carolina matchup marked the fourth consecutive game Pacioretty has missed since being injured Oct. 26 on a punishing hit from Tampa Bay defenseman Braydon Coburn in the opening five minutes of the first period.

Pacioretty, who was not available to the media, remains day to day with an upper-body injury.

The Knights play Nov. 10 at Montreal, where Pacioretty played for 10 seasons. He served as the Canadiens’ captain since 2015 before being traded to the Knights for Tomas Tatar, prospect Nick Suzuki and a second-round pick on Sept. 10.

Pacioretty has two goals and a minus-4 rating in 10 games.

“Whenever he’s able to play, I think that’s a huge asset to our team,” forward Alex Tuch said. “He’s really good in the locker room. He was the captain of the Canadiens, so you know he’s a leader. He has a lot of experience and he scores a lot of goals, which we would like to have right now.”

“Movember” mustaches are not taken lightly in the Knights’ locker room, and Tuch playfully accused multiple teammates of “cheating” on their facial hair.

Defenseman Shea Theodore was one of the alleged culprits who started growing his mustache prior to Nov. 1, along with defenseman Colin Miller and forward William Carrier.

Theodore offered his defense when told there’s been an accusation levied against him.

“Whoa, it’s not just me. I think you can look at maybe five guys who started a little bit earlier,” Theodore said with a laugh. “Me, (Miller, Carrier, Ryan Carpenter and Malcolm Subban) all had a little head start, but I feel like it’s for a good cause. You can call it cheating, but if you’re not cheating you’re not trying, right?”

Tuch hasn’t been in the NHL long, but the 22-year-old offered a hot take on Pacioretty.

According to Tuch, his teammate has the best wrist shot in the league.

“Hands down,” Tuch offered. “If anyone has any issues with that, please come talk to me and let’s watch Max together.”

Pacioretty is a five-time 30-goal scorer, but there might be fans in a few other cities ready to take umbrage at Tuch’s claim.