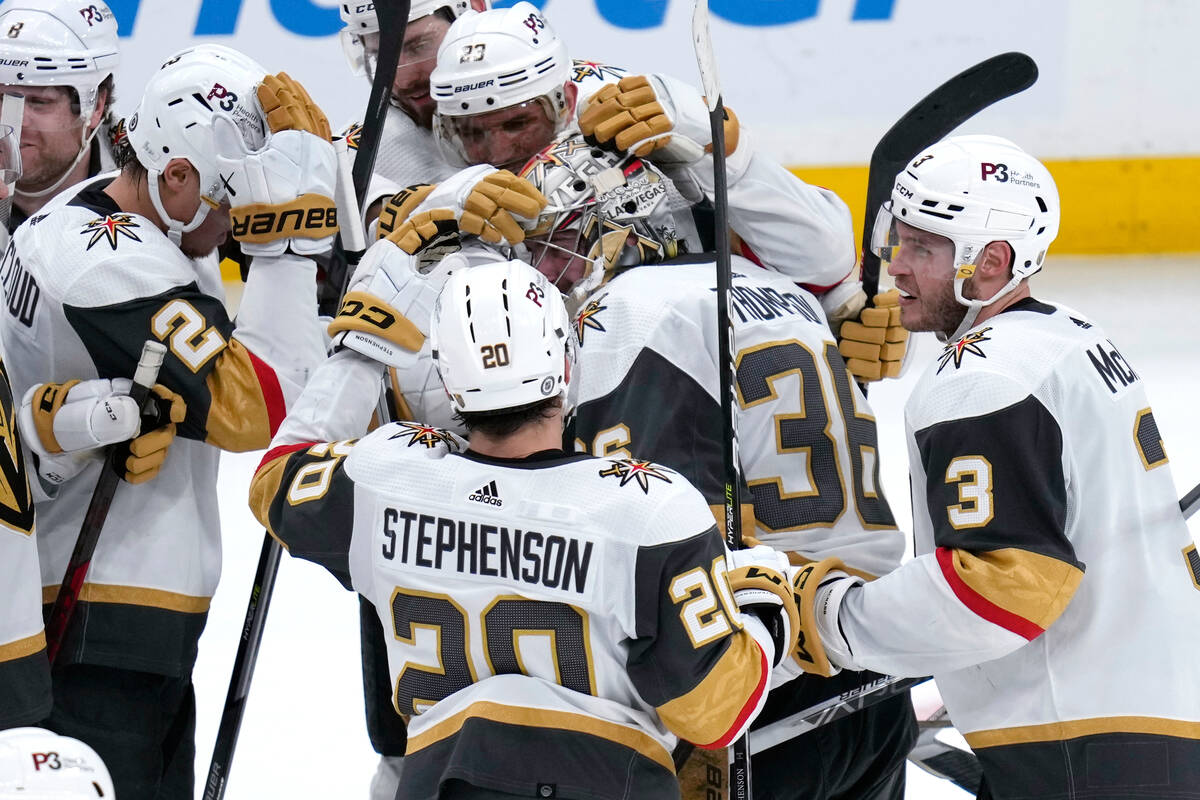 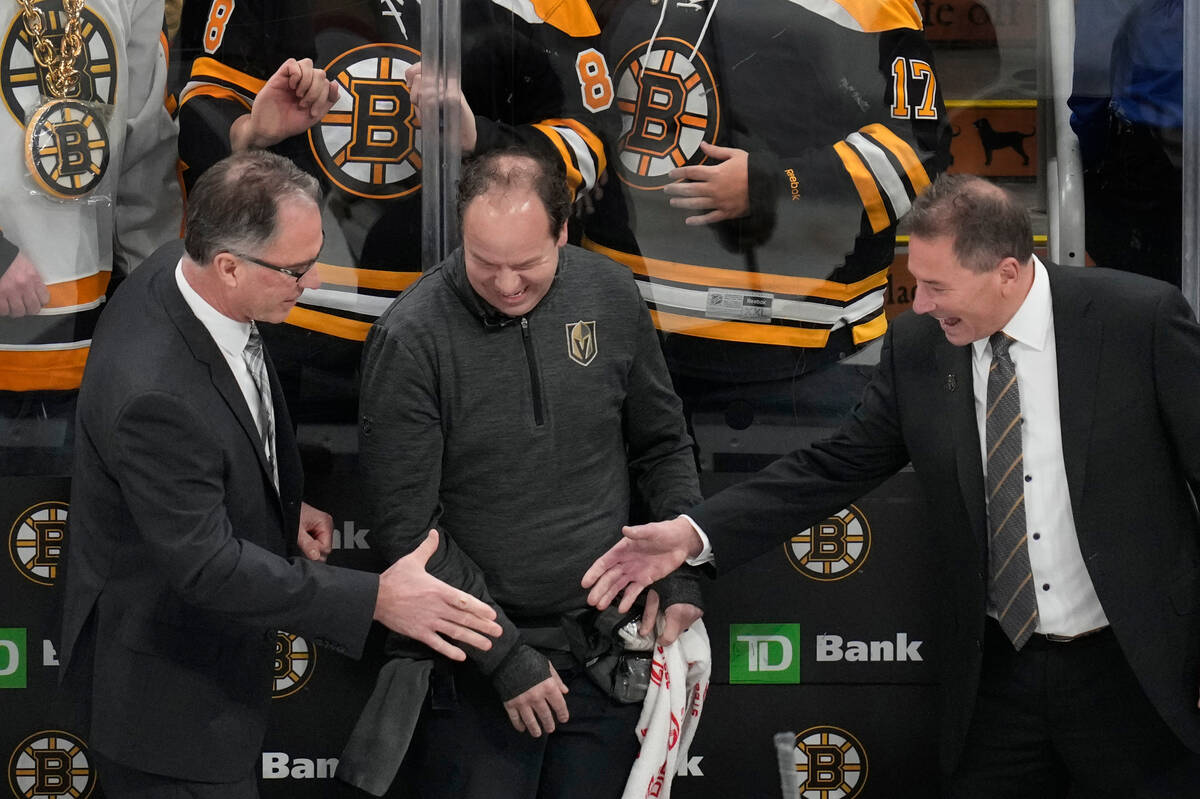 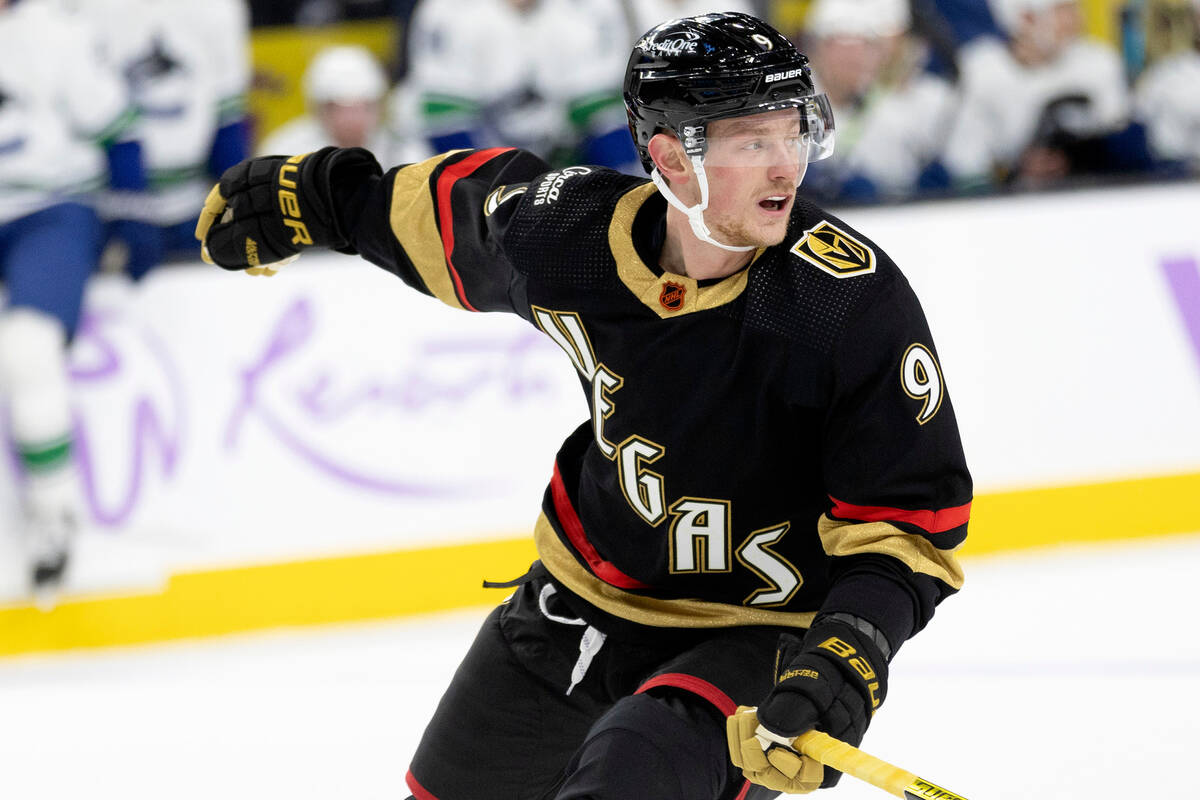 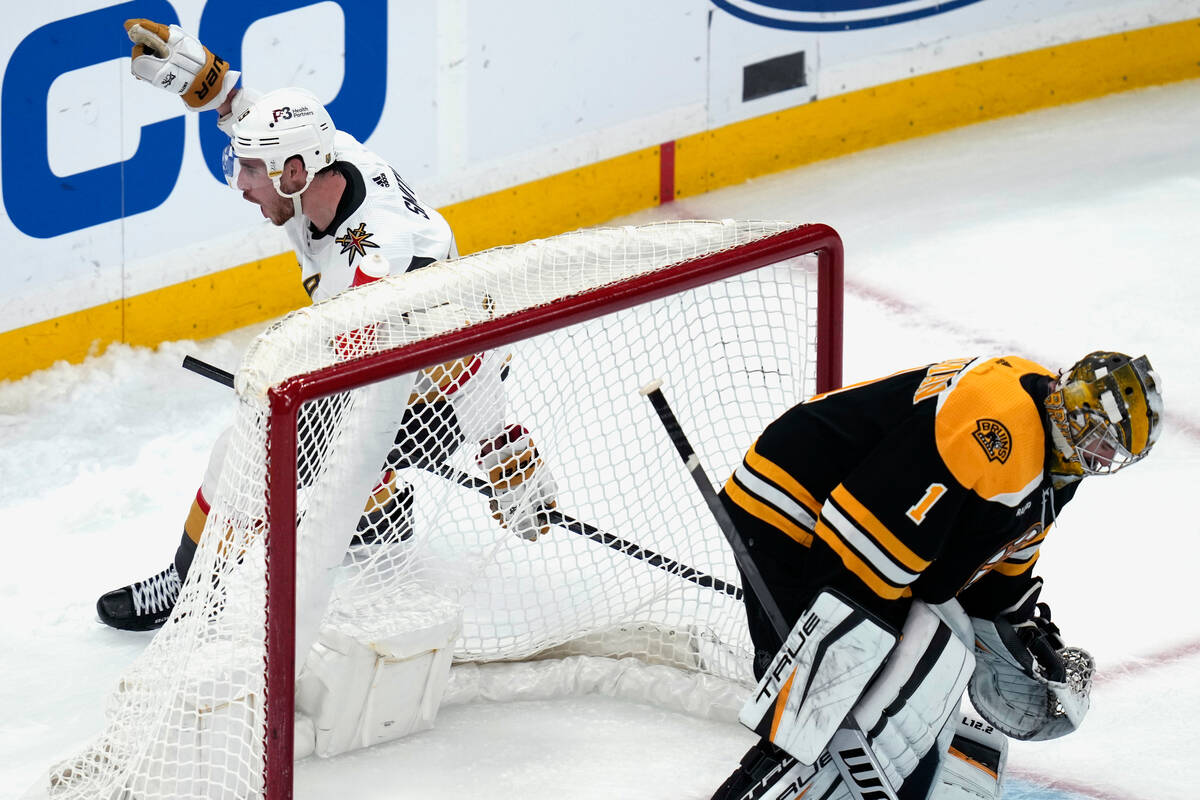 Vegas Golden Knights right wing Reilly Smith, left, celebrates after scoring on Boston Bruins goaltender Jeremy Swayman (1) during a shoot out following an overtime period, during an NHL hockey game, Monday, Dec. 5, 2022, in Boston. Smith scored the only goal in the shoot out, helping the Knights defeat the Bruins 4-3. (AP Photo/Charles Krupa)

The Golden Knights have a morning skate tradition when someone has a meaningful game on tap.

Most of the players gather around the edge of the center circle to finish up the workout with a stretch. But someone — whether it’s because they’re facing a former team, have a birthday or something else — has to go in the middle.

The Knights knew that night’s game in Boston’s TD Garden would be special for Cassidy, who coached the Bruins for six successful seasons before being fired June 6. They came out flying because of that.

The Knights built a 3-0 lead even without two of their best players in center Jack Eichel (lower-body injury) and defenseman Alex Pietrangelo (personal reasons). The Bruins came back to tie it, but left wing Reilly Smith scored in the fifth round of a shootout to wrap up the team’s four-game road trip with a 4-3 victory.

“I think tonight it showed we want to play for a guy like that,” right wing Jonathan Marchessault said. “He’s been great for us since he came in.”

It’s no surprise Cassidy had the shorthanded Knights (19-7-1) ready for the Bruins.

Almost no one knows the organization better than he does after his 14 years there. Six of those were spent coaching the NHL team, a stint that included six playoff appearances, the 2019 Eastern Conference championship and the 2020 Presidents’ Trophy. His tenure ended in the summer after a first-round loss to the Carolina Hurricanes.

The Knights were aware of what the game meant to Cassidy. They saw him get in the center circle despite his surgically repaired knee and hip. They watched his emotional reaction to a first-period tribute video from the Bruins.

“I appreciate it,” said Cassidy, who waved to the crowd and patted over his heart after the clip played. “It’s that simple. I appreciate it. I did what I could here to help the team win.”

The Knights sprinted out of the gates to start. A goal from Marchessault and the first two-goal game of rookie left wing Paul Cotter’s career put them ahead 3-0 only 51 seconds into the second period.

Boston pushed back. Left wing Brad Marchand scored with 6:14 left in the second, and right wing David Pastrnak scored his 17th goal 25 seconds before the second intermission. Left wing Taylor Hall tied the game 3-3 with a power-play goal 3:08 into the third.

The Knights, playing with tired legs in the final game of the road trip, relied on rookie goaltender Logan Thompson to keep their hopes alive from there. He made 14 saves in the third. He made another six in overtime, including four on a penalty kill. Then he made five straight stops in the shootout to set up Smith’s winner.

The win was Thompson’s 13th, one behind Boston’s Linus Ullmark for the NHL lead. It was Cassidy’s first in TD Garden.

“That was important, especially for Bruce,” Cotter said. “We wanted that one bad, as you could tell. It was great to get that win.”

Thompson isn’t just good at shootouts. He’s one of the best ever.

The 25-year-old is 25-for-29 in his career in shootouts. The NHL record book only includes goaltenders who have faced 40 shots or more. But if Thompson qualified, his .862 save percentage would rank second all-time.

The only goaltender better than him? Ullmark (.889), who didn’t start Monday.

“Never a doubt with (Thompson),” Cotter said. “Unbelievable goalie and especially in shootouts.”

Cotter moved up to the first line with Eichel out. He took full advantage.

The 23-year-old scored twice his first 16 games this season. Cotter doubled that output Monday, despite not having a goal his previous 11 games or a point in his last 10.

He even had an opportunity for a hat trick that defenseman Charlie McAvoy deflected away. Cotter finished with three shots on goal, tied for second most on the team.

The Knights said Eichel is considered day to day with his injury, which he suffered in the third period Saturday against the Detroit Red Wings.

He participated in Monday’s morning skate to see if he could play but Cassidy said afterward Eichel “didn’t feel great.” That had to be disappointing for the Massachusetts native, who won the Hobey Baker Award for college hockey’s best player his lone year at Boston University.

The Knights have to hope Eichel can heal fast. He leads the team with 13 goals and 29 points. 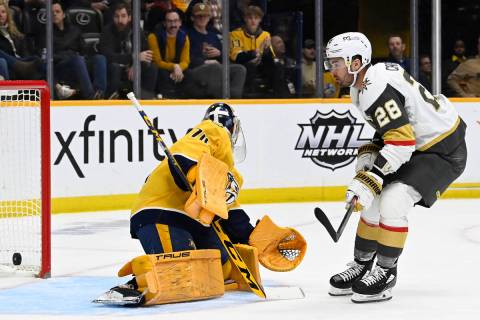 The Golden Knights got goals from four players to return from the All-Star break with a road win against the Nashville Predators on Tuesday night.