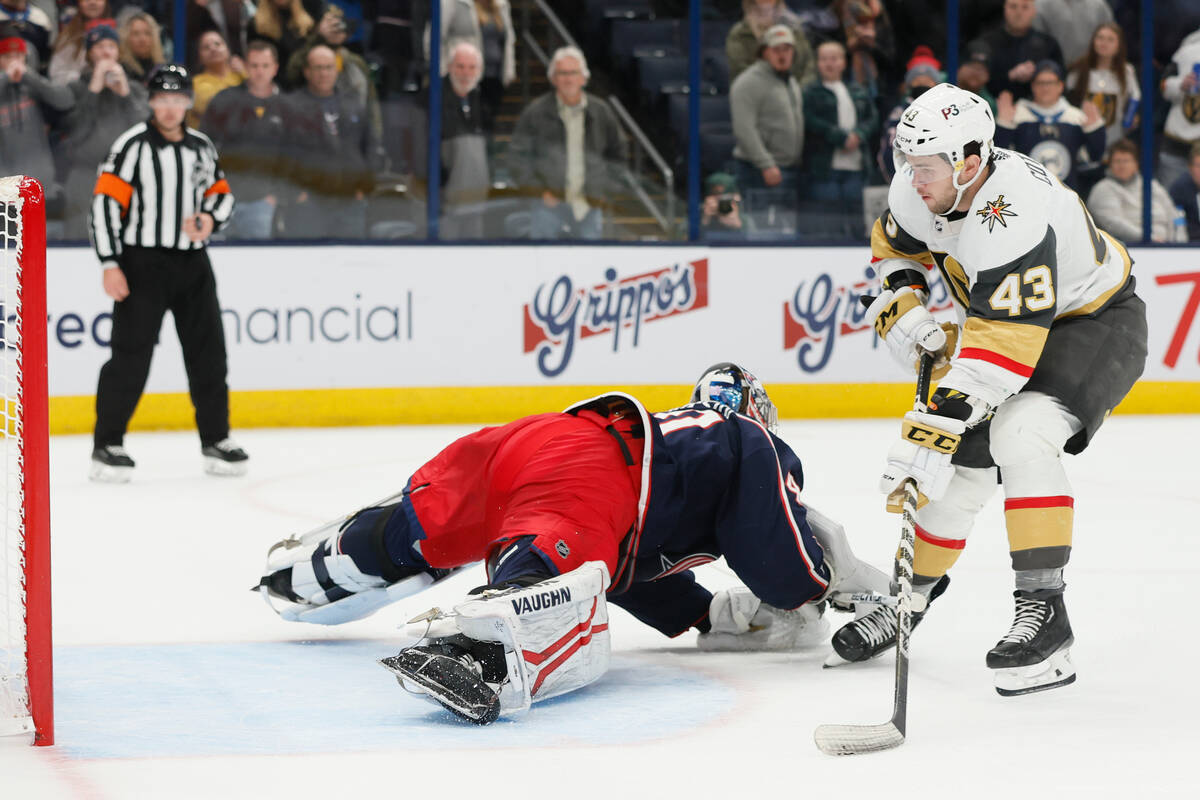 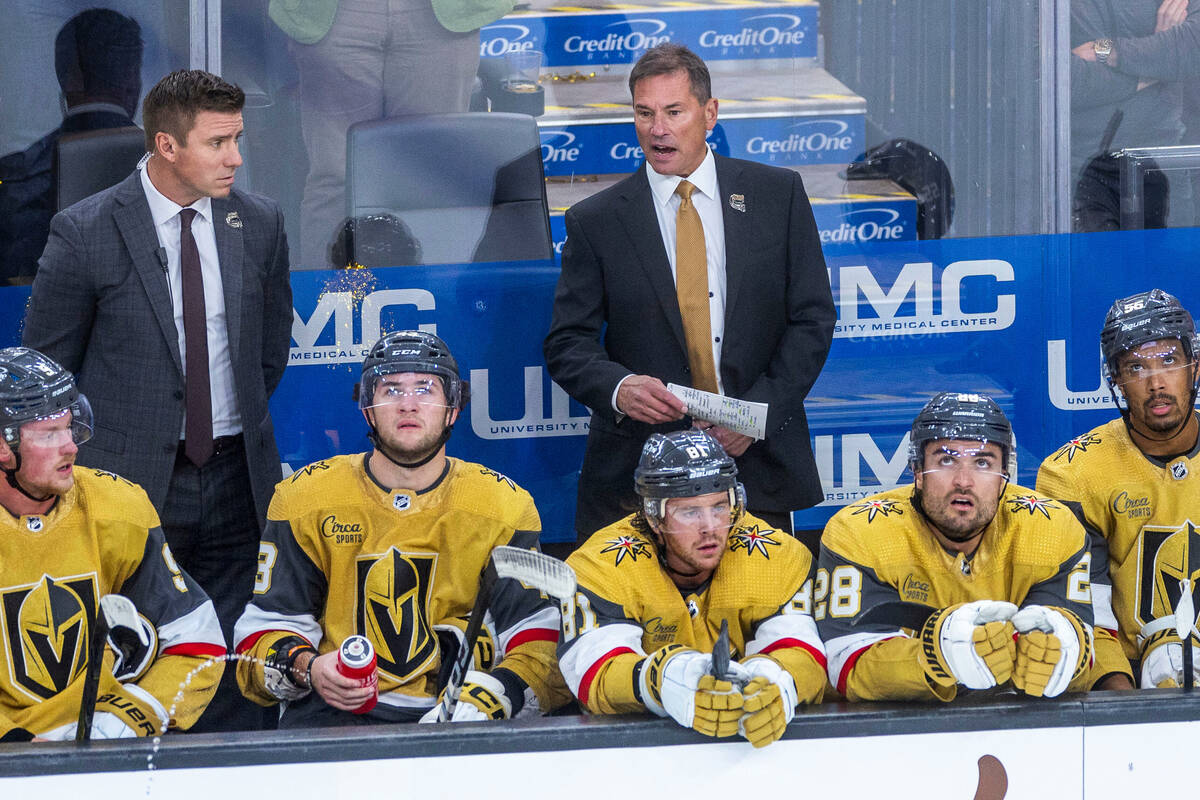 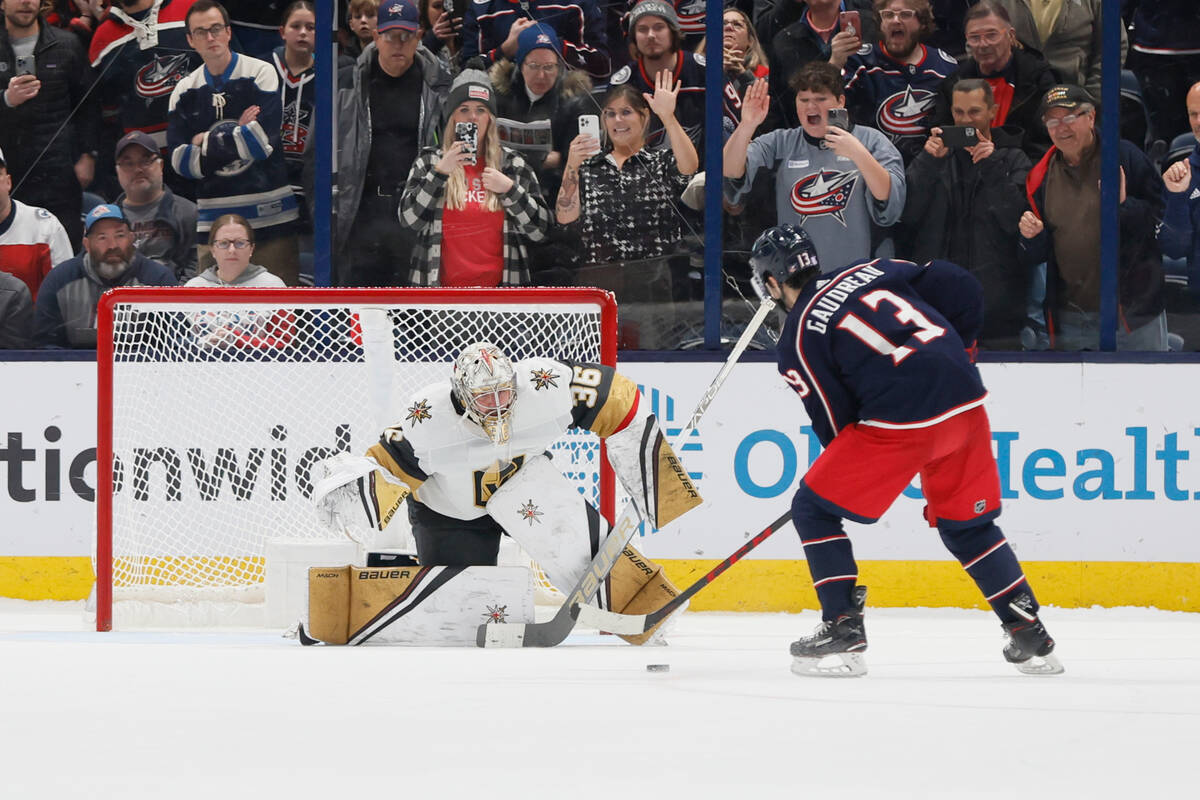 Logan Thompson took off his blocker and showed the Golden Knights’ bench four fingers, then three.

The Knights goaltender was taking care of his part of the shootout Monday at Columbus’ Nationwide Arena. He knew who could take care of the other end.

Coach Bruce Cassidy listened. He sent out rookie left wing Paul Cotter — No. 43 on the Knights — for the team’s seventh shootout attempt soon after.

Cotter doesn’t have a point his last eight games. Cassidy admitted Saturday the 23-year-old’s play has dropped off since training camp. But Thompson knows what Cotter is capable of after playing with him on the Silver Knights the previous two years.

Cotter rewarded the faith. His forehand move bested Blue Jackets goaltender Daniil Tarasov to give the Golden Knights a 3-2 win to start a four-game trip and improve their NHL-best road record to 10-1-1.

“That’s something I take pride in,” Cotter, who had his mother and sister at the game, said to AT&T SportsNet. “It might be a little silly but it’s a big part of the game when it comes down to it. I was ready.”

Cassidy said he’s never had a goaltender call for a shooter from the net before.

Thompson isn’t most goalies, however. He previously gave captain Mark Stone advice before a penalty shot Nov. 19 against Edmonton. It worked.

Thompson was already doing everything in his power to give the Knights the win anyway. He made 26 saves in regulation and overtime before the shootout started, one game after allowing a season-high five goals to Vancouver on Saturday. The Knights could just couldn’t find a third goal to seal the win earlier. They led 2-0 after the first period, but Columbus center Boone Jenner tied the game with 7:49 left in the third.

Thompson allowed a goal on the first attempt he saw when the shootout started. He then stopped six in a row. It was Thompson’s first shootout win in four tries, even though he’s saved 20 of the 24 attempts he’s faced.

“I like shootouts,” said Thompson, who is second in the NHL with 12 wins. “I was determined to not to let in another goal and I knew we were going to put one in.”

Cotter ended up being the man to do it. Cassidy said players on the bench were calling for the rookie as well before he was sent out. But it’s different when a goalie steps up to say it. Left wing William Carrier said Cotter and Thompson practice shootouts together every day.

There’s no better judge than Thompson of what Cotter can do.

The Knights changed their defense pairs for only the second time this season because defenseman Alex Pietrangelo didn’t play for personal reasons.

Pietrangelo’s absence put defenseman Ben Hutton in the lineup for the second time. Hutton only played 10:43 in his first game since Oct. 11, causing a ripple effect throughout the blue line.

The game turned frightening for the Knights 1:45 into the third period.

Center Jack Eichel, their leading scorer, was hit in the head by a wrist shot from Hague and went straight to the locker room with blood on the left side of his face.

The team breathed a sigh of relief more than 13 minutes of game time later. Eichel returned with 5:07 left in the third period and played the rest of the way.

”It was awesome to see him come back,” Cotter said. “Crazy situation, but that’s a warrior to come back in a game like that.”

The Knights, for the second time in four games, got back-to-back goals from the two Williams on the roster.

Center William Karlsson scored the team’s first goal after swatting in his own rebound while falling to the ice with 4:01 left in the first period. Carrier made it 2-0 just 56 seconds later.

The pair scored in reverse order Wednesday against Ottawa. The goal was Carrier’s eighth, one off his career high.