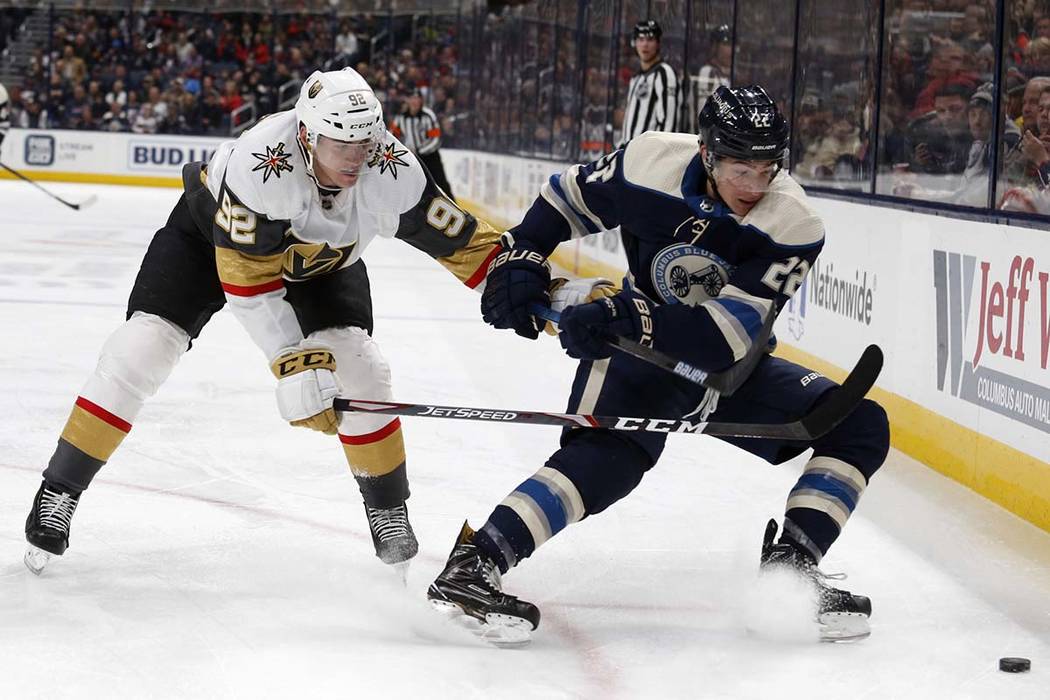 Tomas Nosek was a healthy scratch in three of the Golden Knights’ past four games and isn’t expected to play Saturday at Los Angeles, either.

Coach Gerard Gallant hopes the benching sends a message to the 27-year-old forward.

“He’s going to be hungry to get back in our lineup,” Gallant said Friday. “I want to see a fired-up guy when he gets back in and ready to play. Do it a little bit harder, that’s all.”

The Knights made Nosek the fourth-line center out of training camp with the hope he could replace the versatile Pierre-Edouard Bellemare, who signed as an unrestricted free agent with Colorado.

But Nosek has been temporarily supplanted by rookie center Nicolas Roy, who has assists in back-to-back games.

Nosek failed to record a point in his past 12 outings despite seeing time as a third-line wing and is no longer one of the first forwards Gallant sends over the boards on the penalty kill, further diminishing his value.

He skated as an extra on the fourth line at practice Friday.

“I have to stay focused and get ready every practice and be ready for the next chance,” Nosek said. “It’s the best league in the world, so the competition is always there. The best players are in the NHL. It keeps pushing me forward every single practice and game, so it’s a good thing.”

In 17 appearances, Nosek has three goals and an assist — all coming in games against San Jose on Oct. 4 and Calgary on Oct. 12.

Gallant’s message to Nosek has been to take care of the small details and manage the puck better.

“I thought the couple games that I didn’t like him, he didn’t do the little things. Getting pucks out of our zone, turning a few pucks over,” Gallant said. “Some top players on every team gets away with that stuff because they’re scoring big goals and they’re top players. But you’ve got to make sure the role players are doing their job.”

Center Cody Eakin, who missed most of the third period Wednesday, returned to practice and will make the trip for Saturday’s game at Los Angeles.

“I had a charley horse,” Eakin said. “Just got hit and it tightened up my leg.”

Eakin remains without a goal in 16 games after posting a career-high 22 goals and 41 points last season. He joins Brandon Pirri as the only forwards not to score.

“It’s just one of those things you fight through it,” Eakin said. “Keep working hard and eventually it’ll connect.”