The Golden Knights advanced to the NHL Stanley Cup Playoff semifinals for the third time in the franchise's four years by defeating the Avalanche, 6-3. (Heidi Fang/Las Vegas Review-Journal) 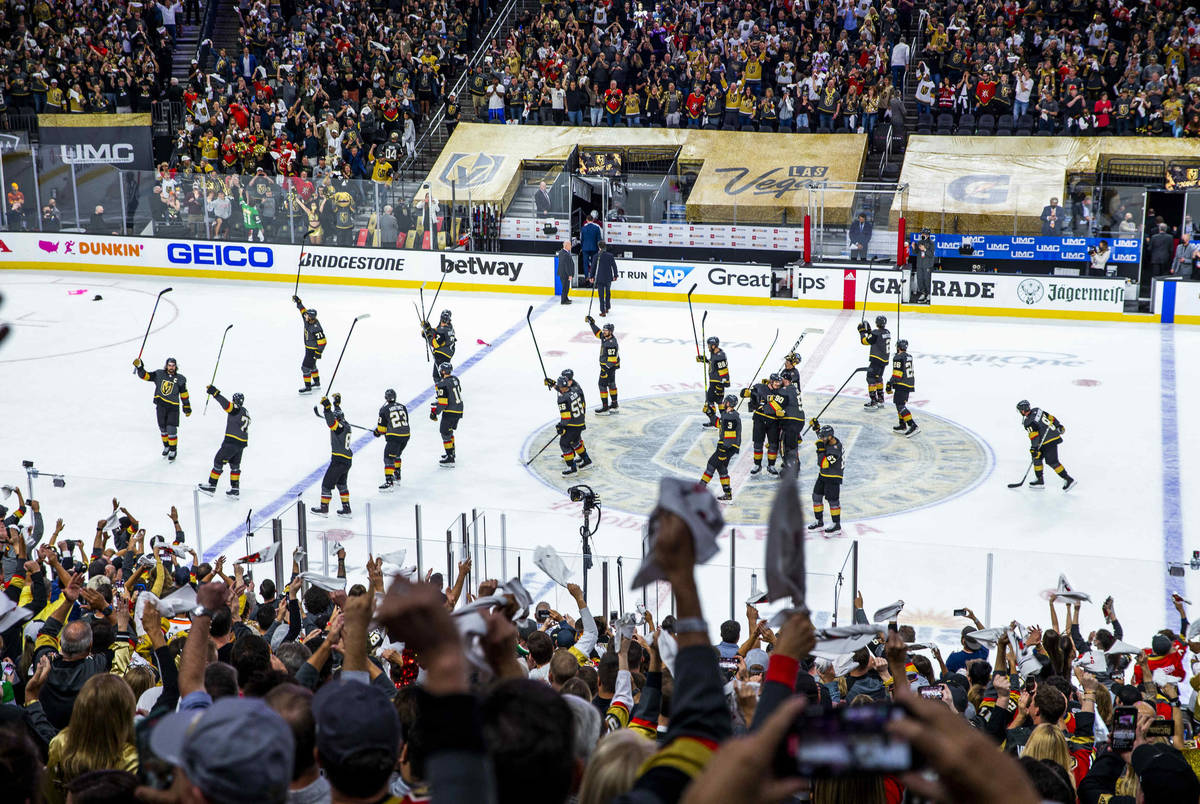 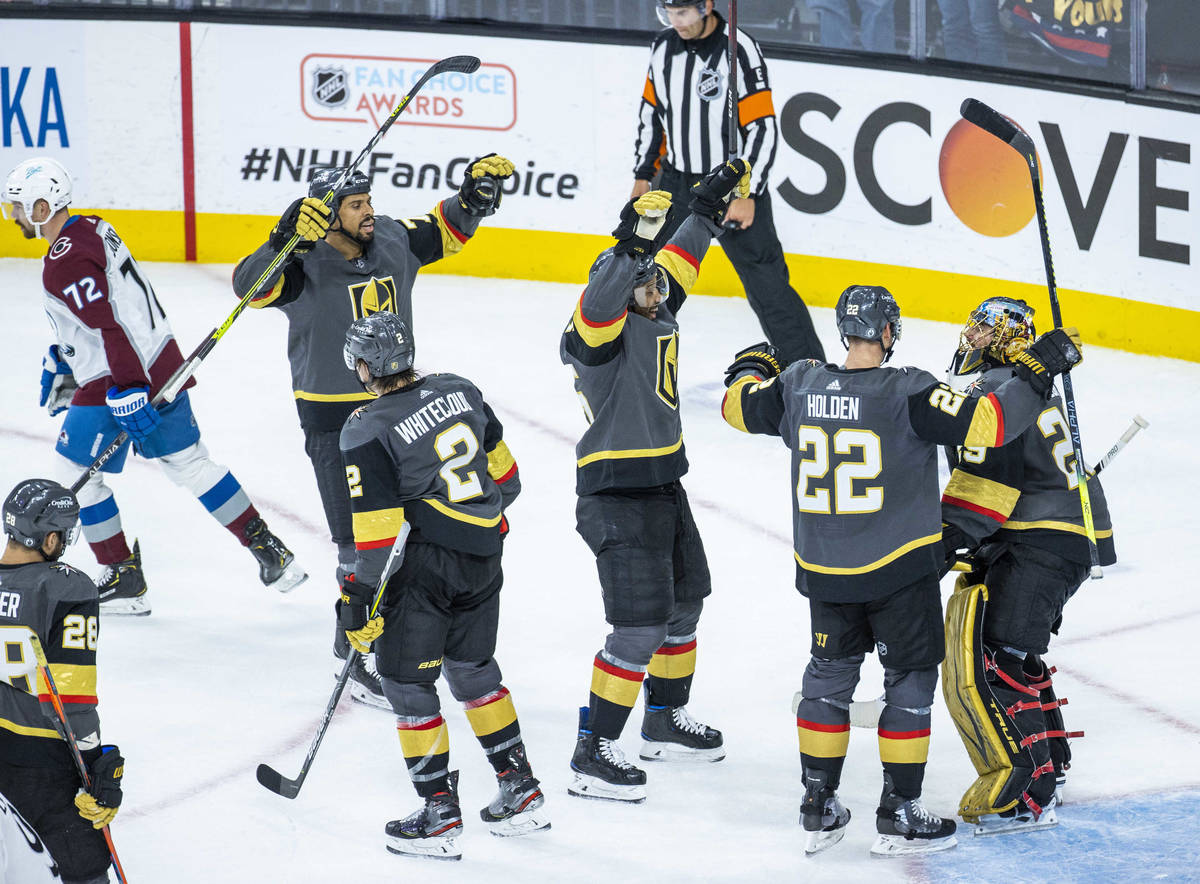 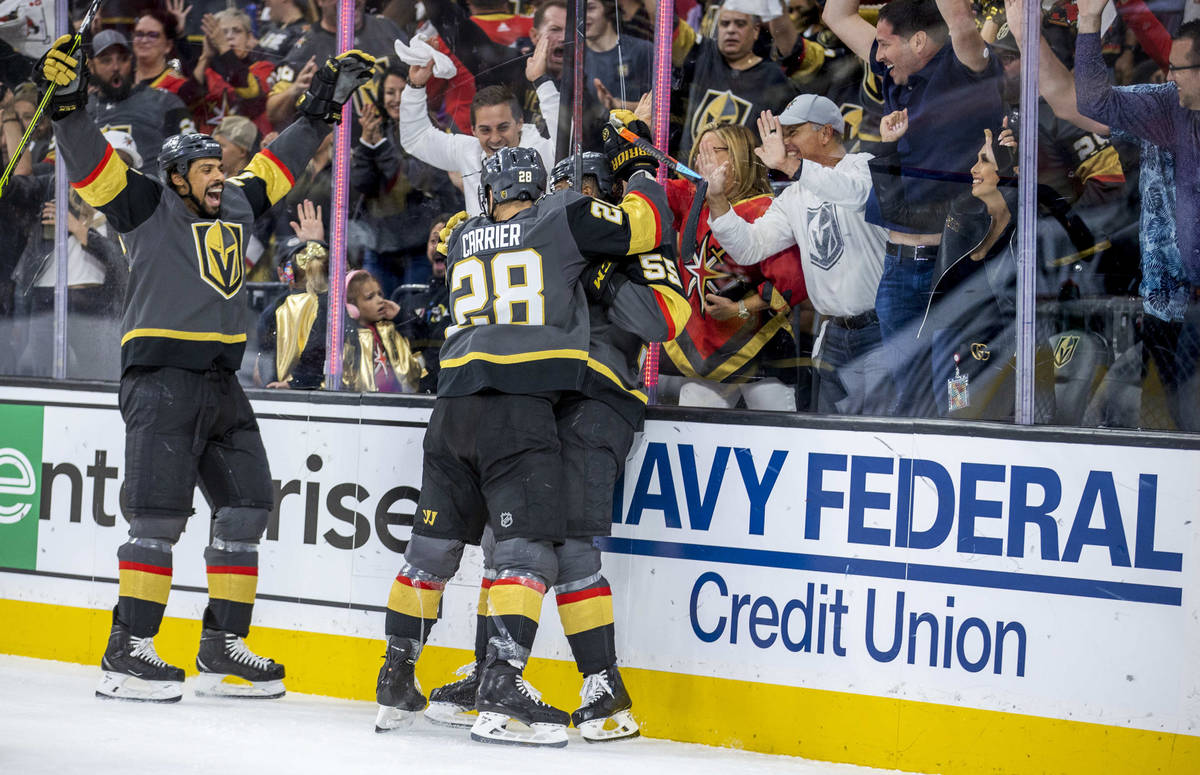 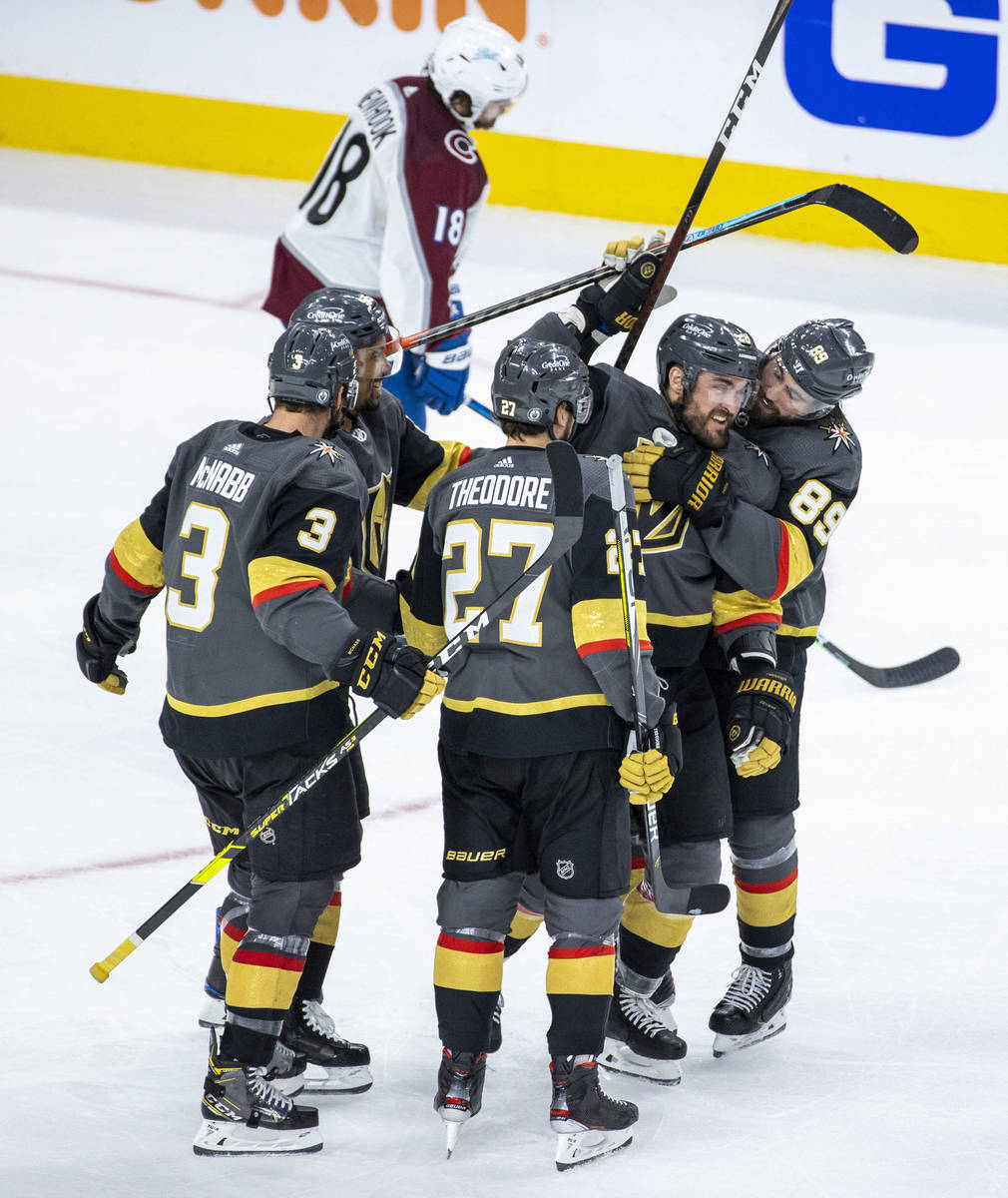 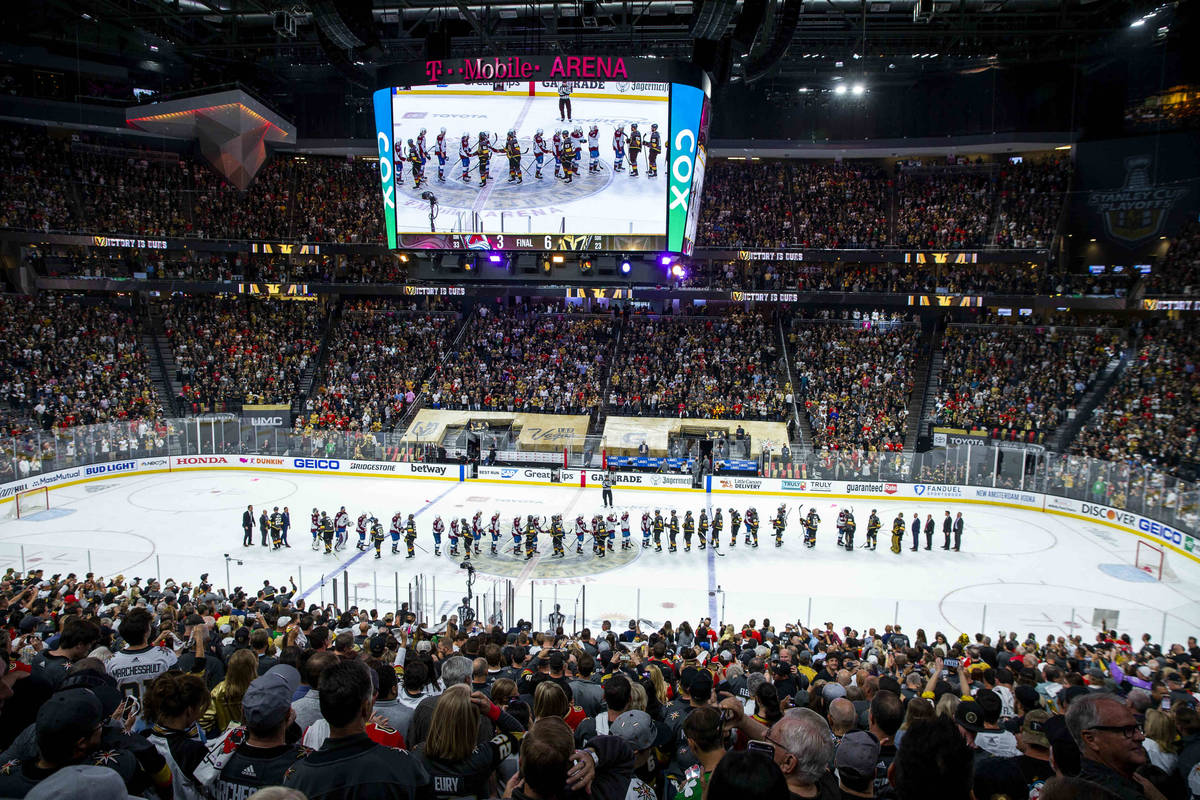 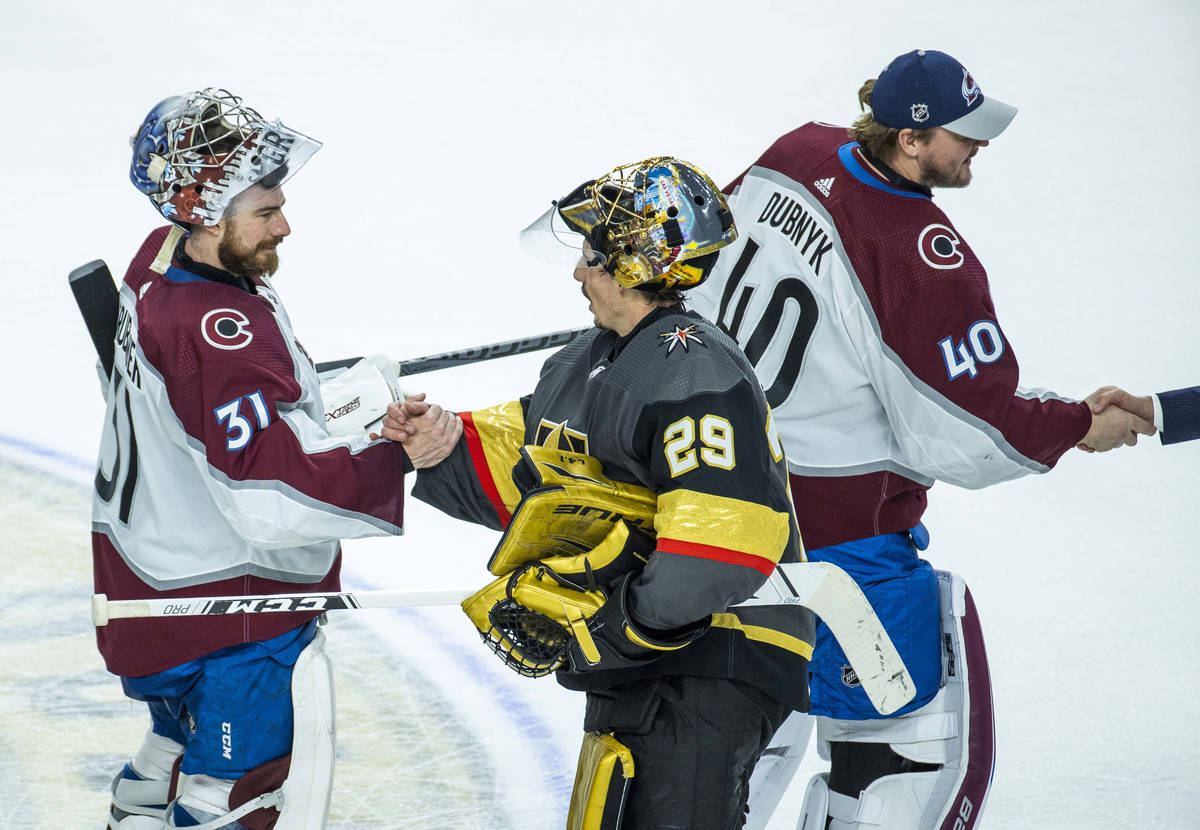 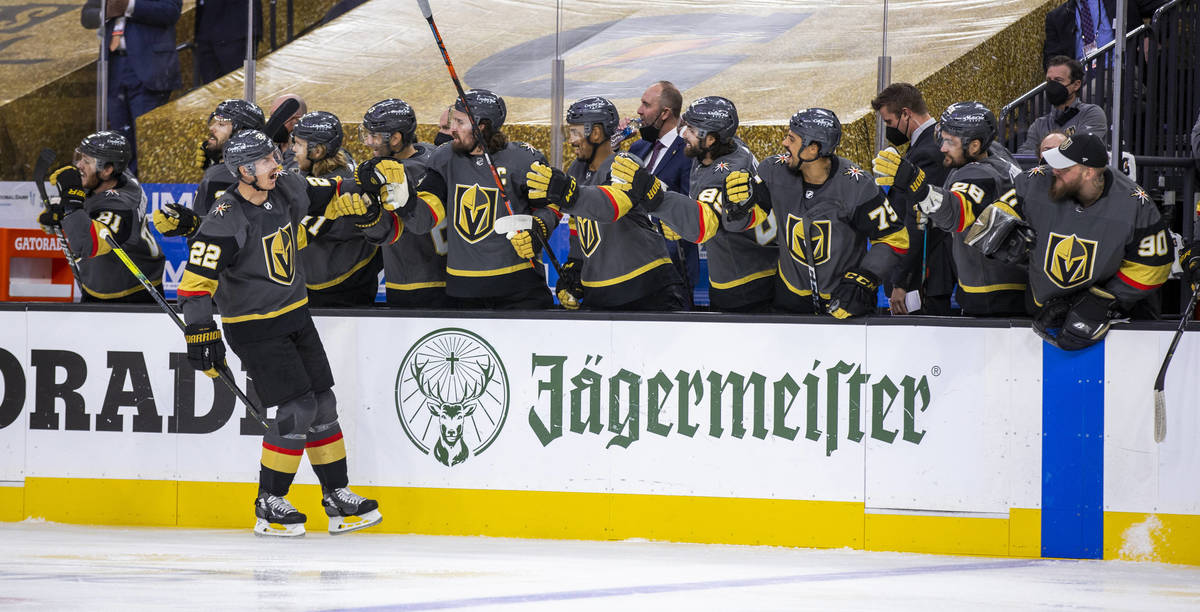 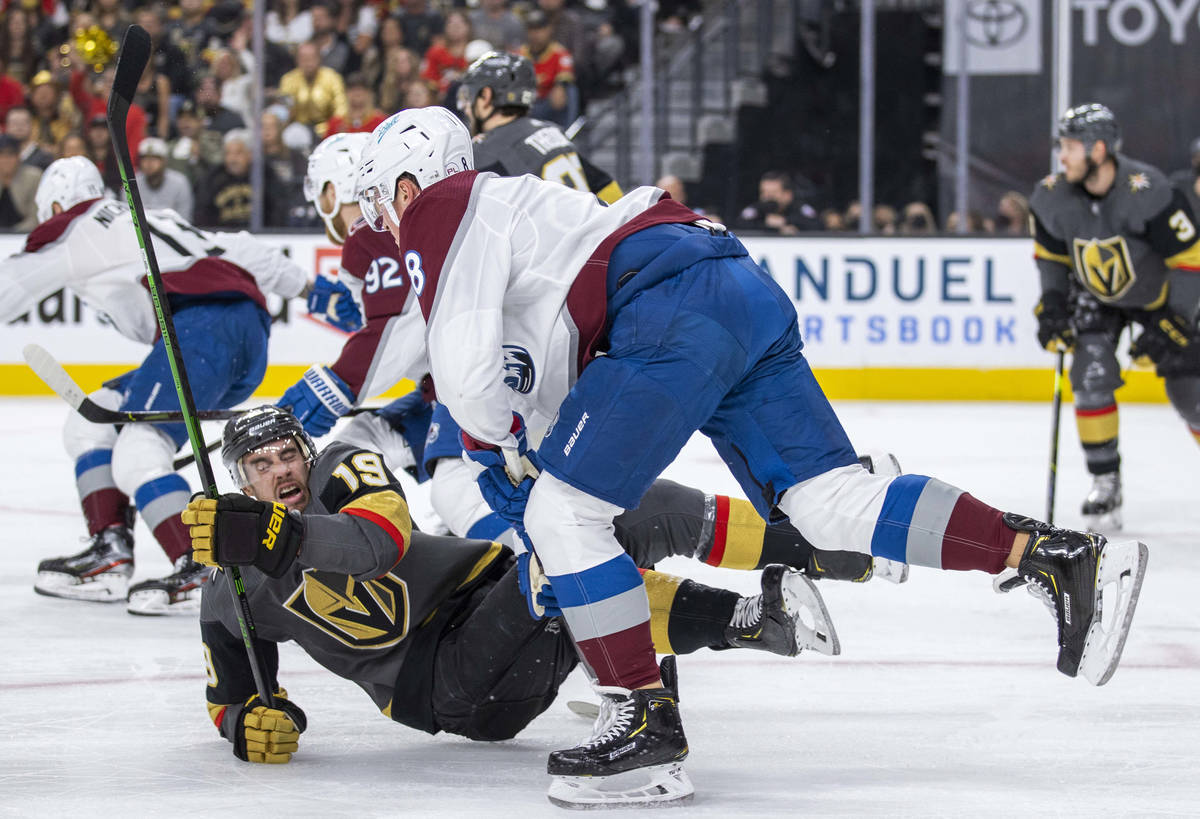 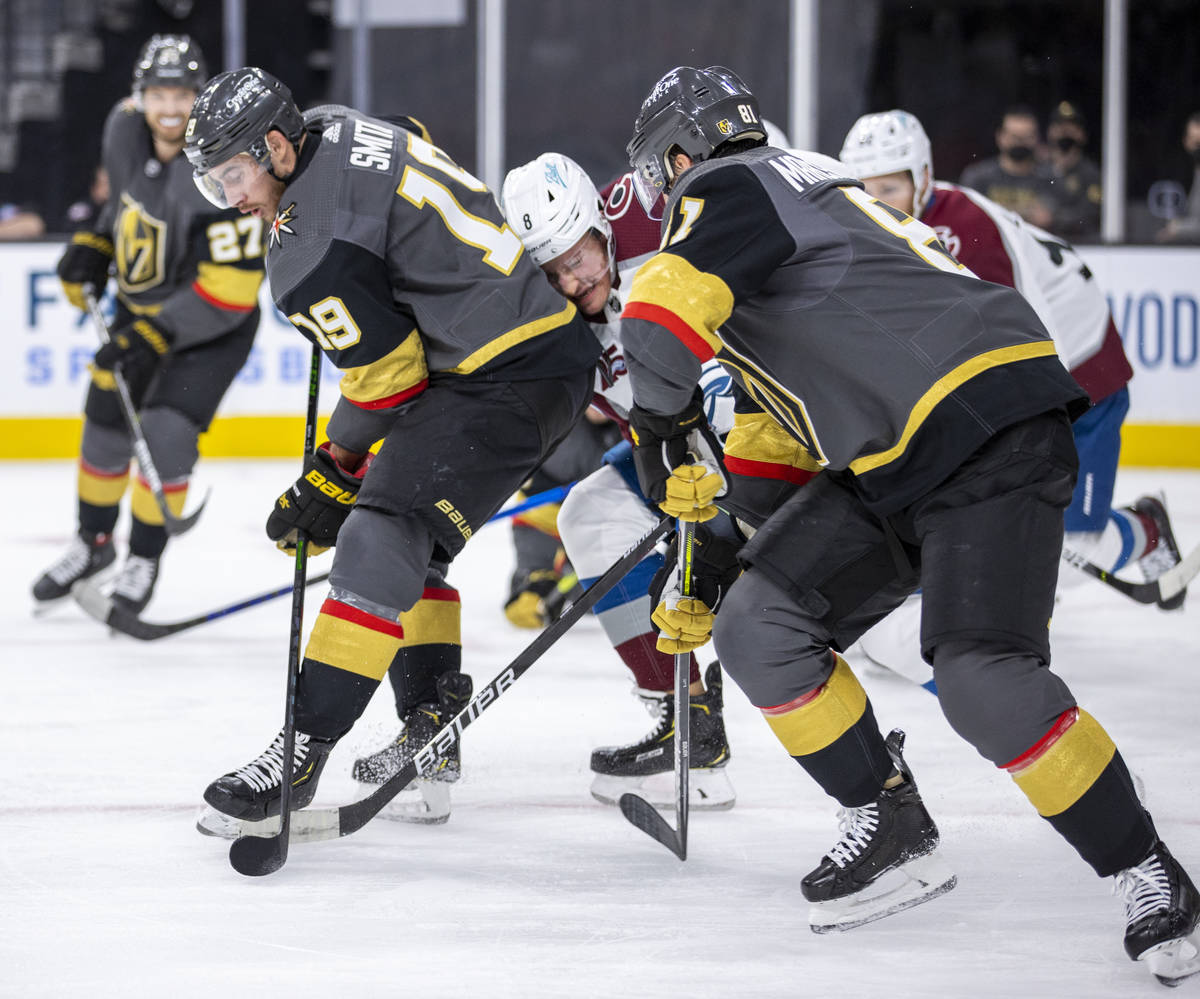 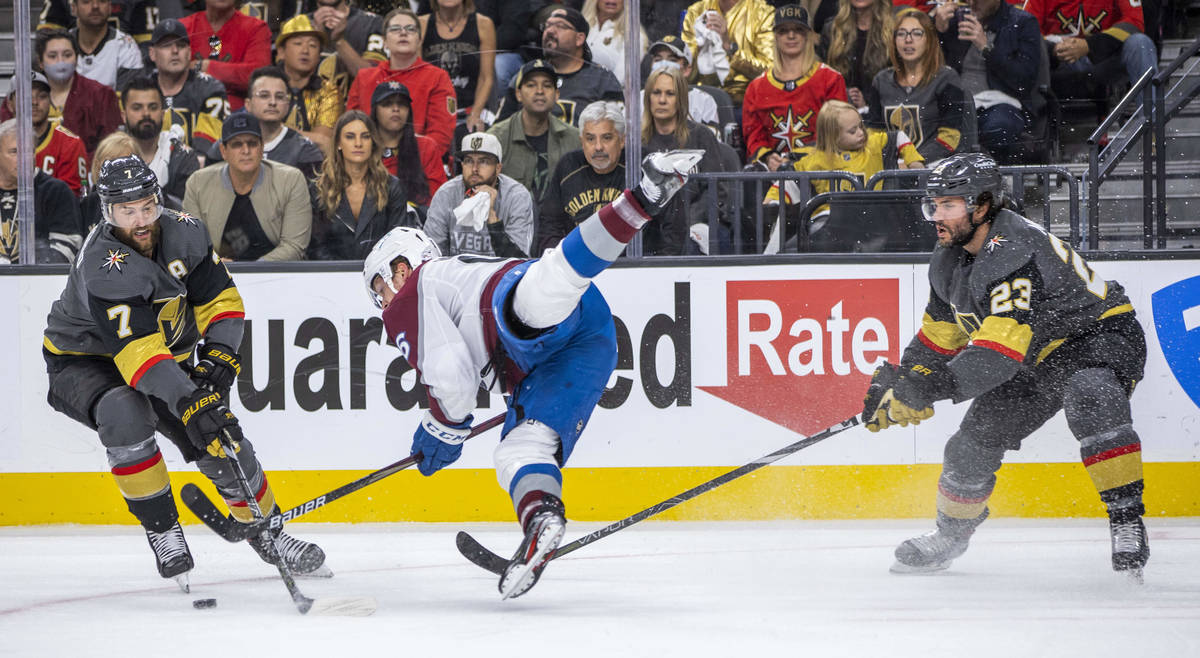 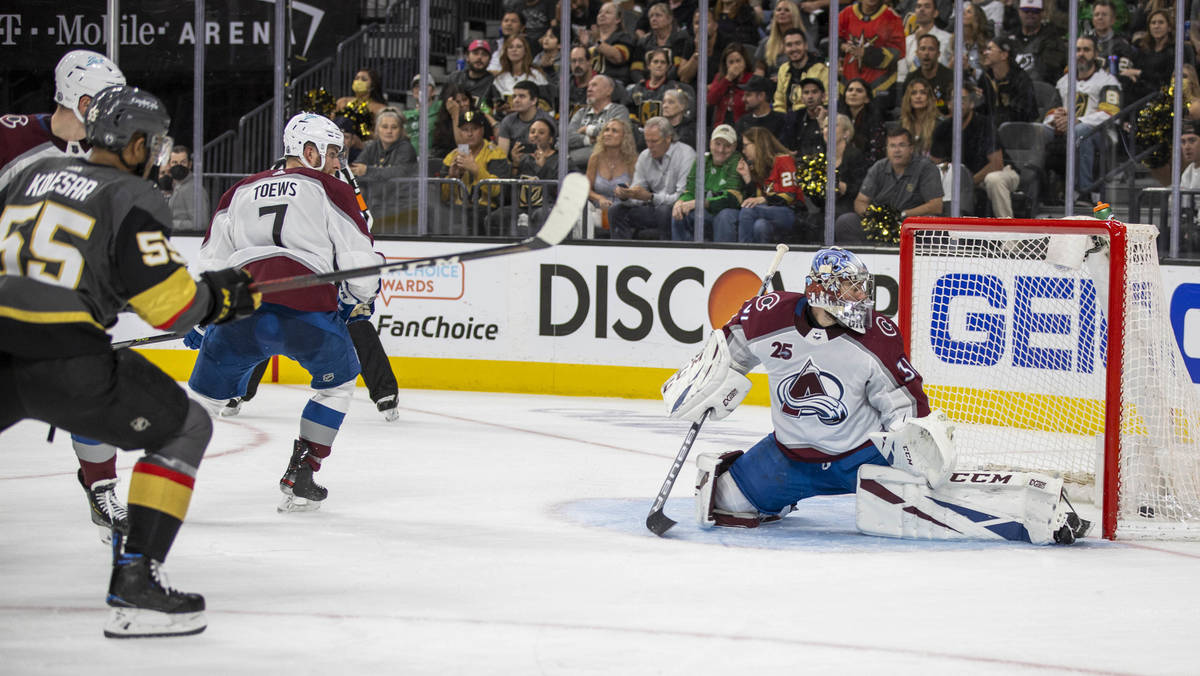 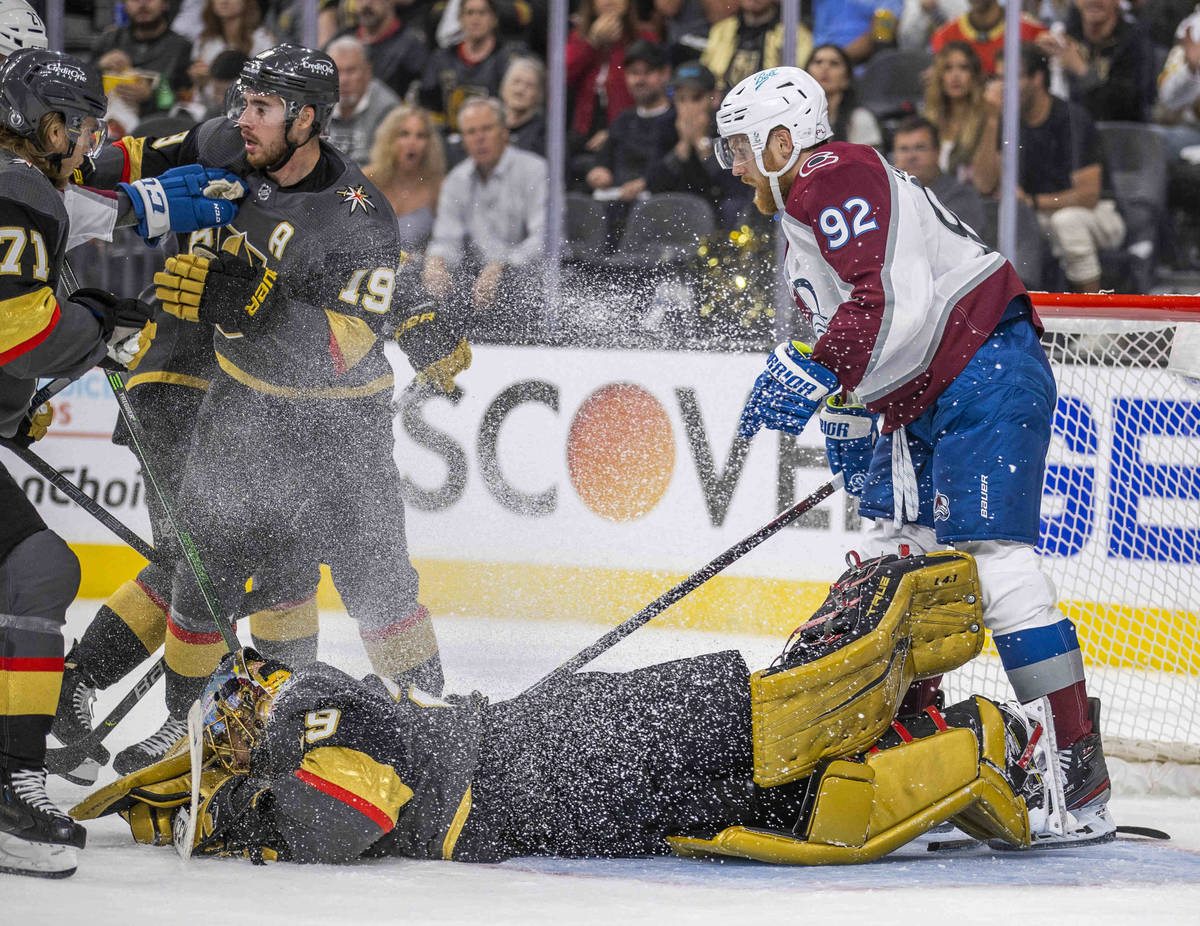 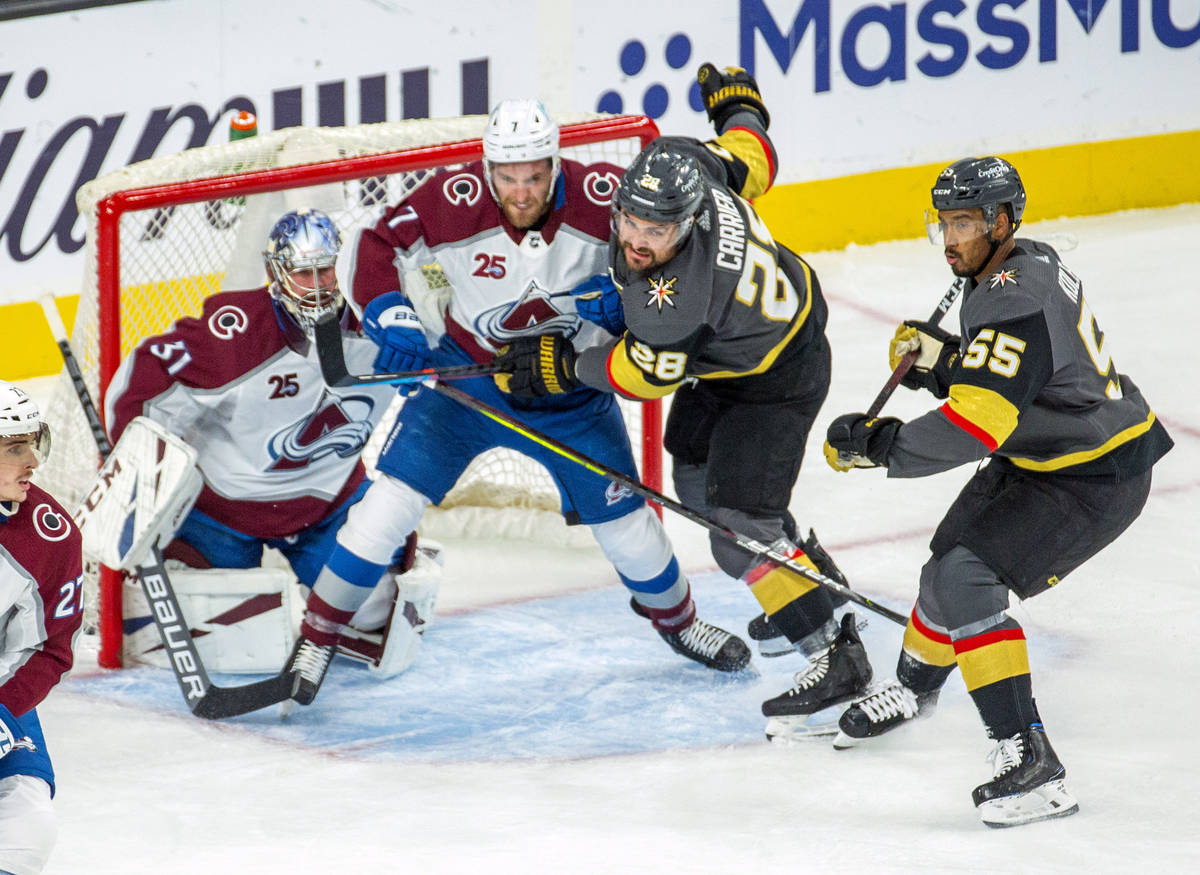 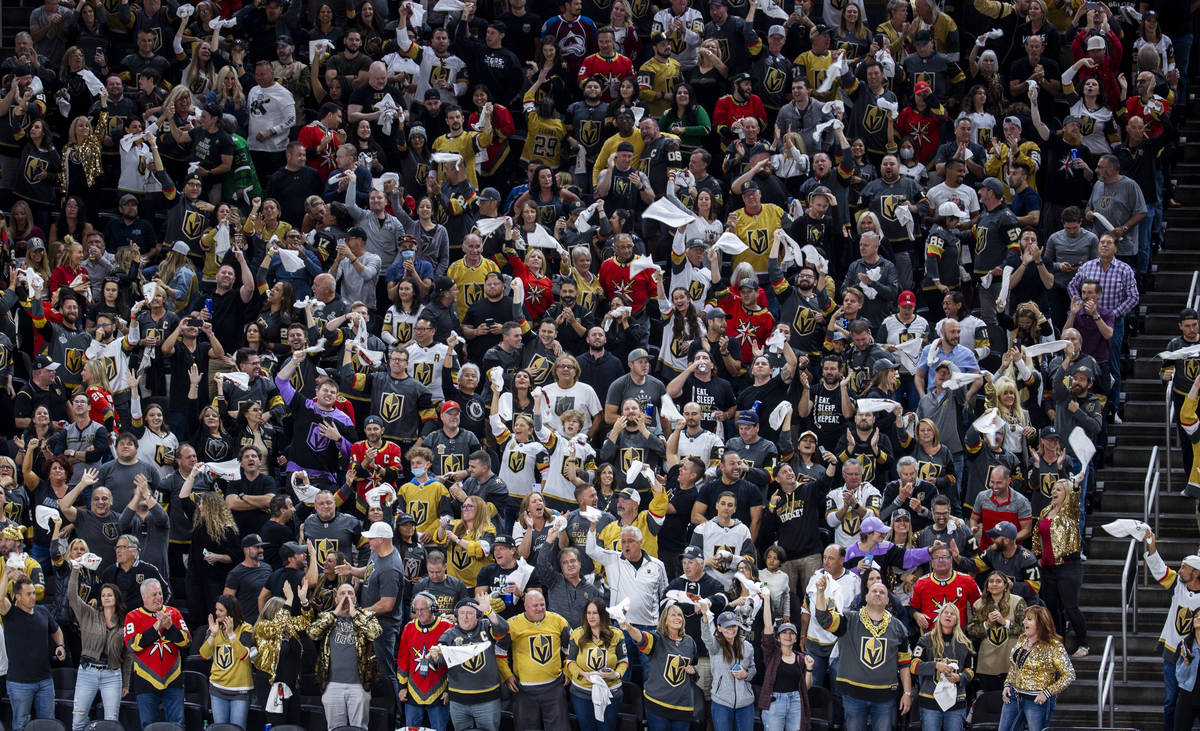 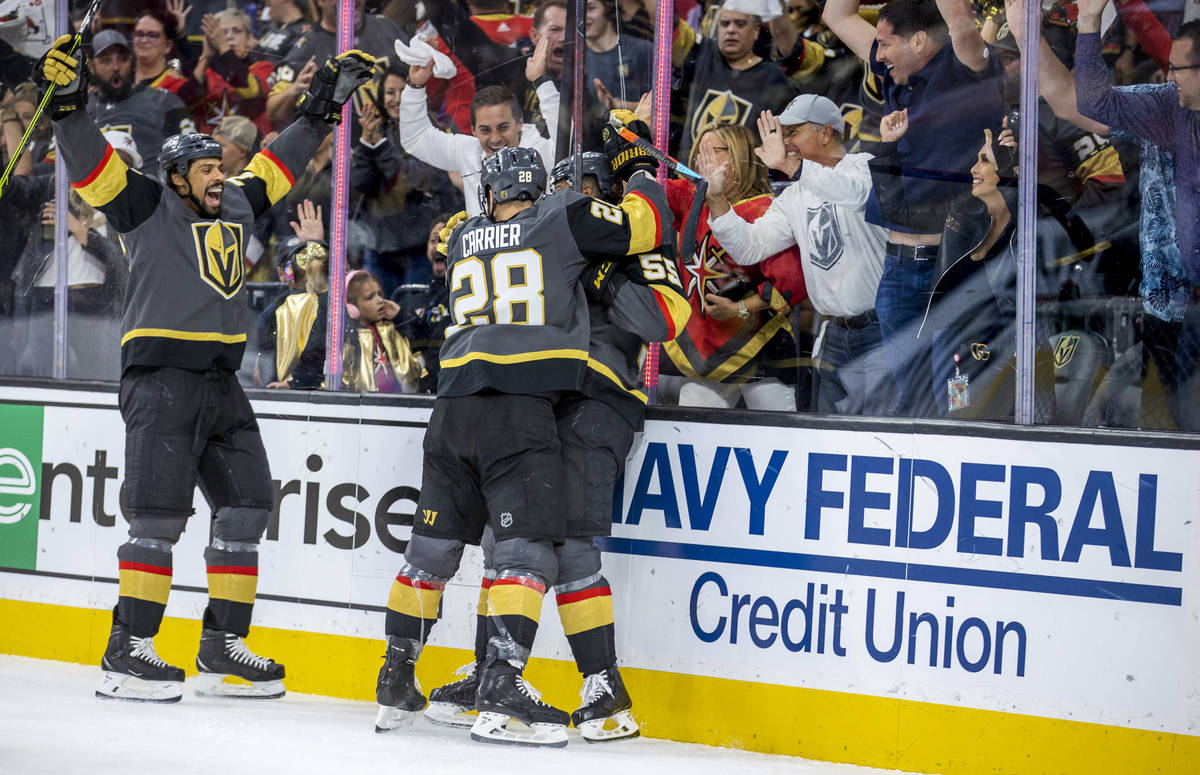 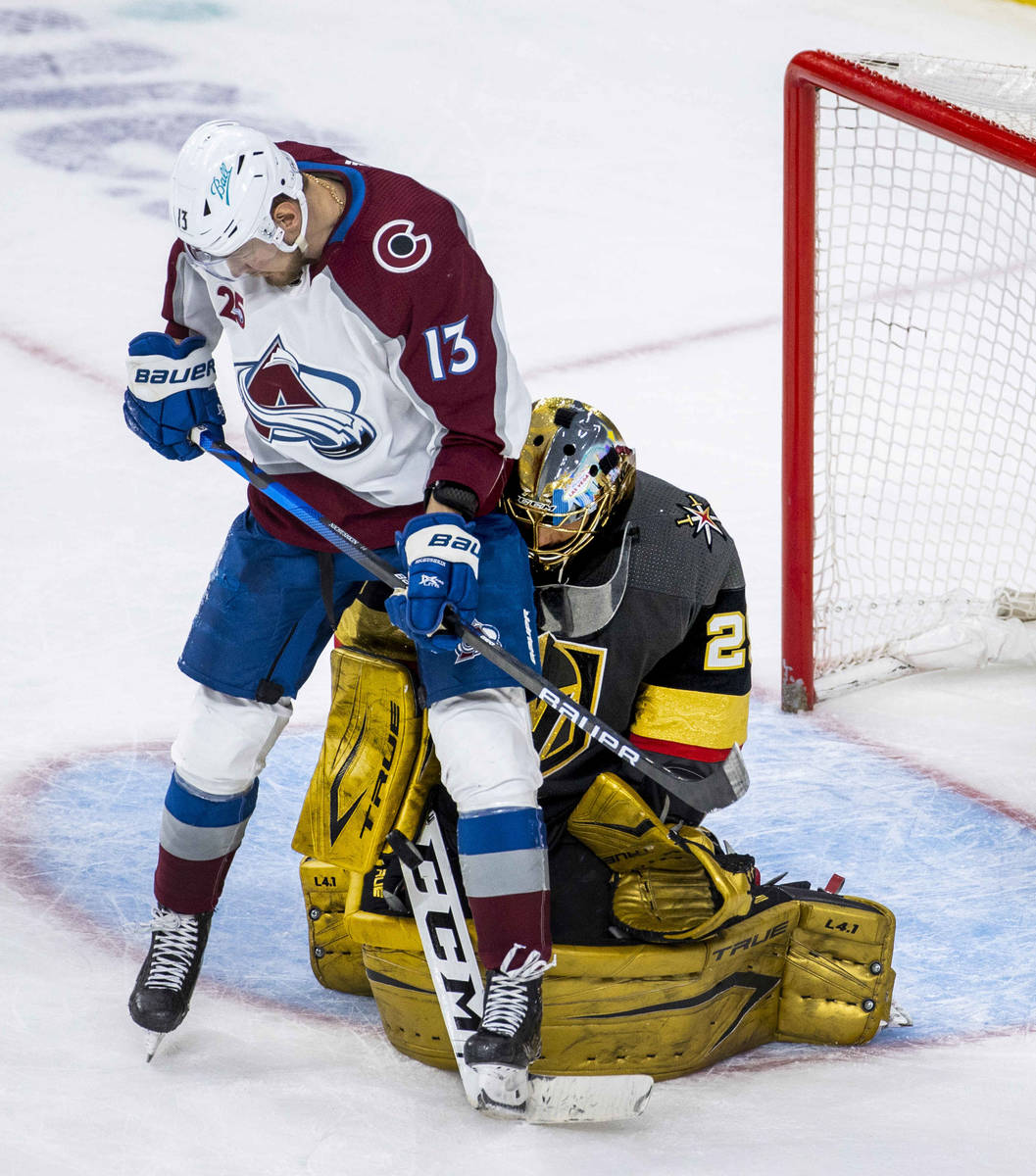 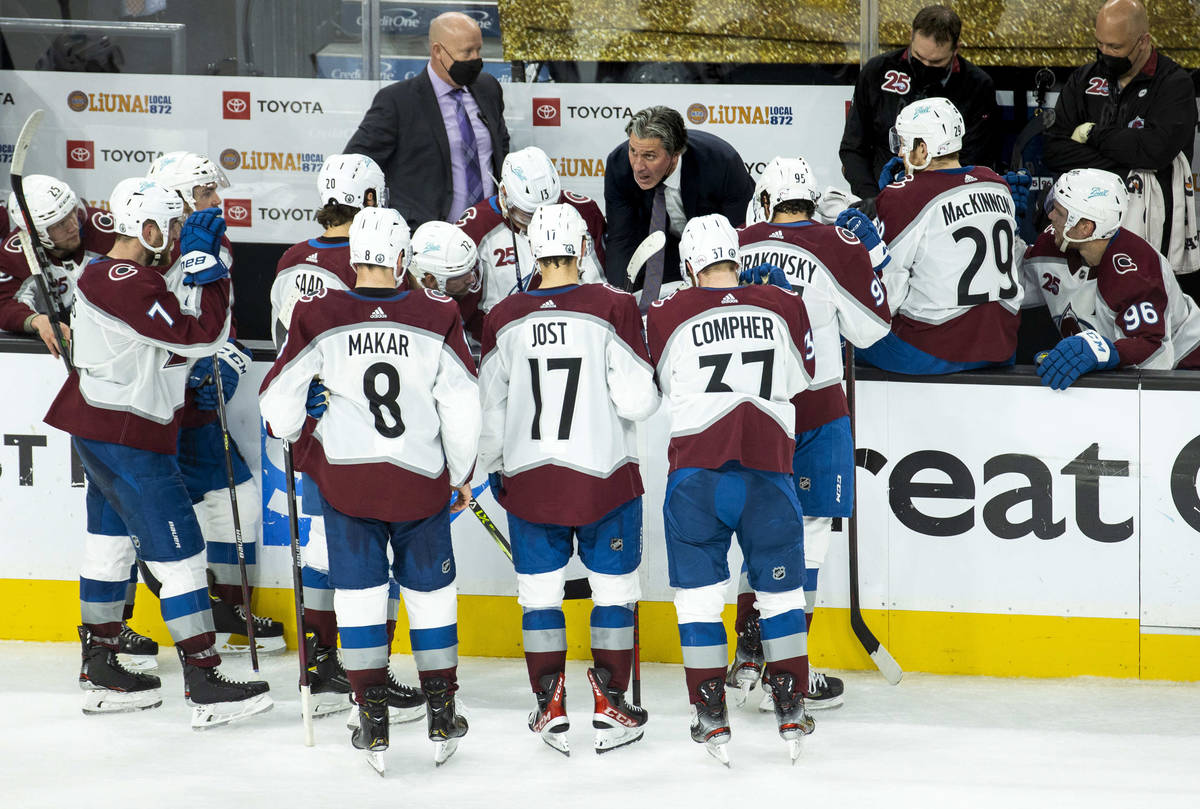 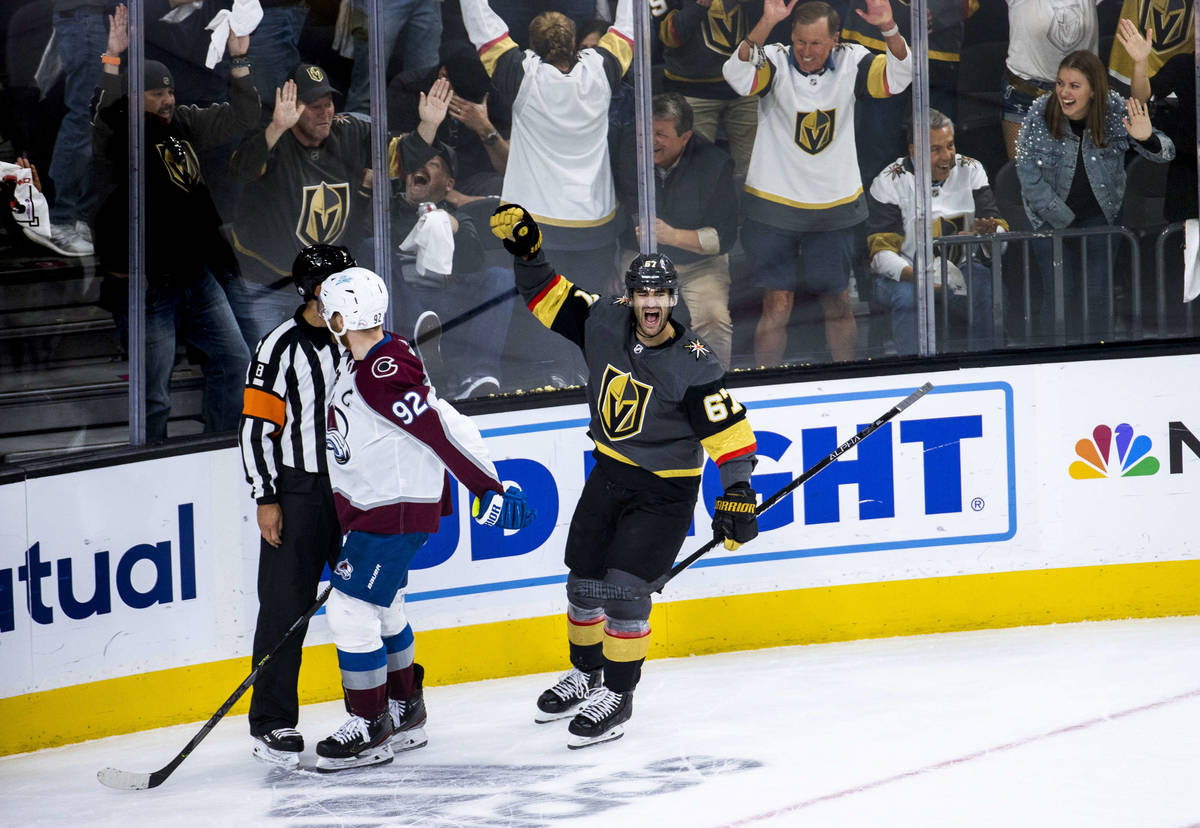 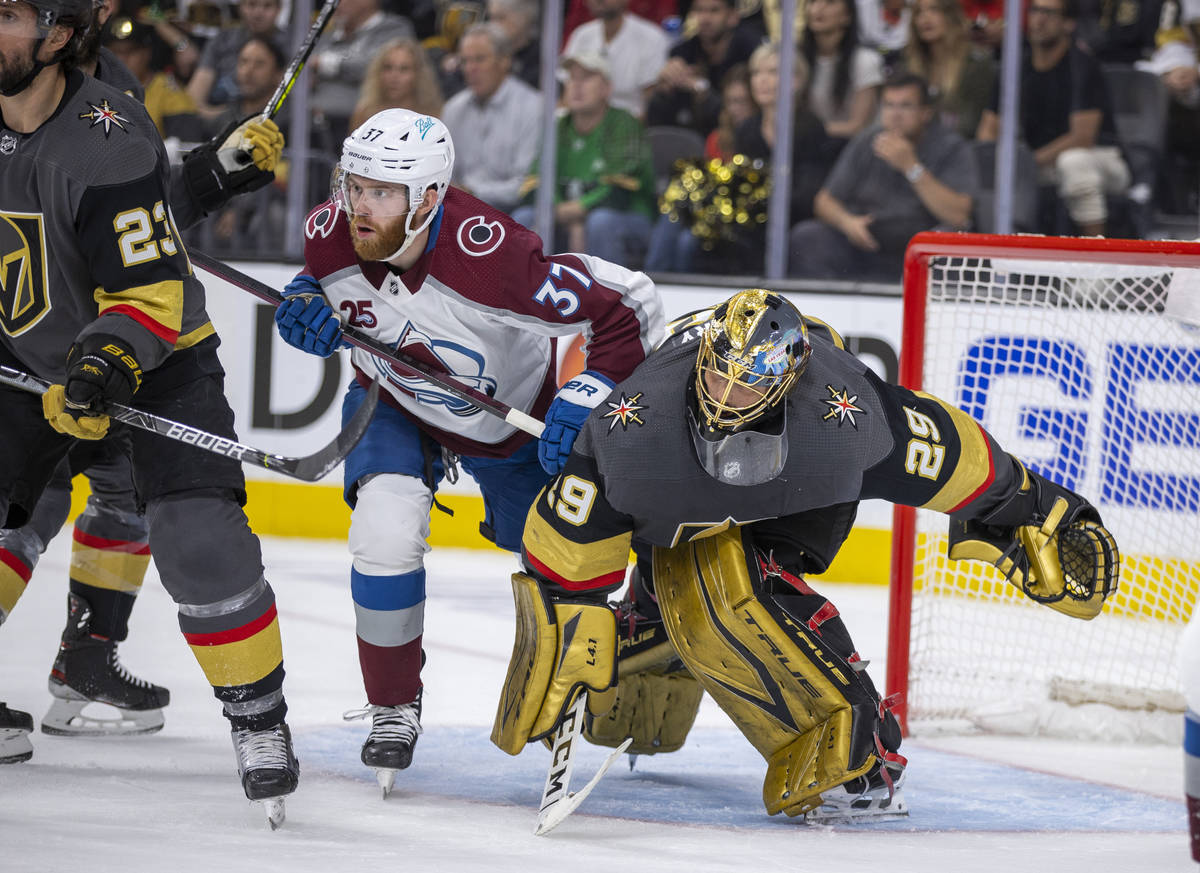 Alex Pietrangelo appeared on the video scoreboard for a between-periods interview Thursday, and the sight of the shirtless Golden Knights defenseman sent a buzz through T-Mobile Arena.

After five months of fumbling pucks at the blue line and falling short of the expectations that came with his high-priced contract, he finally had his breakthrough moment.

Pietrangelo’s goal late in the second period put the Knights ahead to stay, and they closed out the Colorado Avalanche with a 6-3 victory in Game 6 of the West Division final.

“I’ve played a lot of hockey in my career, and I’ve learned to kind of stick through it and trust the process,” Pietrangelo said. “You just continue to put yourself in a spot to score. Get the chances, get the looks that you want and eventually things will turn.”

The Knights won four straight over the Presidents’ Trophy winner after falling behind 2-0 in the series and are the fourth team in NHL history to win a best-of-seven series against the league’s top-seeded club after dropping the first two games.

They advanced to the final four of the postseason for the third time in four seasons and will meet Montreal in the Stanley Cup semifinals starting Monday.

“I don’t think there was a person in the hockey world when we were down 2-0 that would predict that we would finish this off at home in six,” coach Pete DeBoer said. “There was a lot more talk about us being swept and embarrassed and could we even win a game. I think we’ve got a group with a lot of pride. They just blocked out the noise and went to work and battled and scraped and scratched.

Pietrangelo’s delay of game penalty led to Mikko Rantanen’s goal early in the second period, but he made up for his mistake with 17.9 seconds remaining in the period.

Alex Tuch fired a shot that sailed wide, but the rebound bounced hard off the end boards and Pietrangelo tracked it down before firing in his first goal of the postseason.

“Sometimes they all go in. Sometimes none of them go in,” Pietrangelo said. “Of all the chances I’ve had, I wouldn’t have guessed that’s the bounce I would have got.”

Pietrangelo, who signed a seven-year, $61.6 million contract in the offseason, also assisted on Keegan Kolesar’s goal that put the Knights ahead 3-2 with 5:33 to play in the second period.

“I thought he (Pietrangelo) was the best player in the series on either team,” DeBoer said. “He was an absolute monster for us. That’s what we brought him here for.”

Nick Holden and William Karlsson scored in the first period for the Knights. William Carrier added a goal with 8:14 to play before Max Pacioretty’s empty-net goal.

The Knights won all three games at T-Mobile Arena in the series and improved to 21-10 at home in the playoffs, the most wins by any team in the postseason since entering the NHL in 2017-18.

“That’s a good team that we just eliminated,” captain Mark Stone said. “It was awesome to celebrate that one with our fans. That changed the series for us, getting back home in Game 3 to a soldout rink. I really think the tide changed when we got them involved.”

Colorado coach Jared Bednar was behind the bench for the Avalanche after he was held out of the morning skate because of an irregularity in his COVID-19 test results.

Defenseman Devon Toews put the Avalanche ahead 23 seconds into the game, but the Knights answered 52 seconds later on Holden’s wrist shot from the point that surprised Avalanche goalie Philipp Grubauer.

Alec Martinez capped a brilliant period that included six of the Knights’ 15 blocked shots by delivering a perfect cross-ice feed to Karlsson in the right circle for a one-timer goal with 4:54 remaining in the first.

“We battled hard all season to get to this point,” Fleury said. “We had to earn this and work hard to get where we are right now. Feels good. It’s a nice feeling. I think we deserve it.”